Tottenham vs Morecambe: Our betting tips

Tottenham all but have up their chances of winning one cup in midweek as they were eased aside in the League Cup semi-final first leg by Chelsea. Will Antonio Conte see a reaction here? Find out with our Tottenham vs Morecambe match preview with free tips, predictions and odds mentioned along the way.

Alli to star for Spurs

We're taking a bit of a different approach with this game in terms of predictions largely because most Tottenham to win odds are pretty poor – even when factoring in handicaps etc. Instead, we are throwing out a couple of scorer tips. First up Dele Alli. Alli was lighting the world up a few years ago but it now looks like Conte is yet another coach that is unconvinced he deserves to be a key player. He'll play here though and likely as one of the more experienced heads in the team. In this sort of game, he should boss things and it would not be a shock to see him score.

Stockton to give Morecambe something to celebrate

Morecambe might be long shots to win this game but if you saw Tottenham's display against Chelsea in the week you would probably cite their defensive work as shambolic. It's highly likely they'll give up a chance or two to Morecambe and, if one falls to Cole Stockton, he may well make them pay. The former Tranmere man bagged a brace last time out and has hit 15 league goals so far this season; that's an impressive return in a team that is hardly carving teams apart week in, week out.

Check out the key stats & form for Tottenham vs Morecambe

If you're a lower league club that make it to the third round of the FA Cup then there will be few ties that take your fancy more than an away trip to Tottenham. Can Morecambe make it an even more special occasion by getting a result? Probably not but what a day out for their fans.

Tottenham spend every week getting mocked by rival fans for their ‘Spursy' mentality and their midweek loss to Chelsea has just loaded more ammunition into those banter guns. Anything but a big win here would see those levels of ridicule go up a notch.

Morecambe couldn't have picked a better tie than this and whilst their league campaign won't have too many high points, this match is guaranteed to give their fans a great day out. If they get a result, it will be bonkers in the away end.

A brief FAQ ahead of Tottenham vs Morecambe 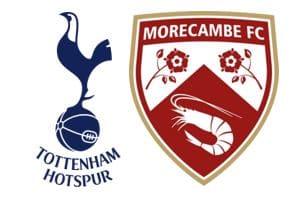