There were a few raised eyebrows when the team sheet for Tottenham Hotspur’s clash with Wolves was released.

Changes are expected at this time of year but spare a thought for Kyle Walker-Peters who, after providing three assists in a man of the match display against Bournemouth on Boxing Day, was dropped to the bench.

Kieran Trippier replaced the 21-year-old and duly made an error which led to Wolves’ clincher in the 3-1 defeat, surrendering possession with a poor pass in midfield which allowed Rúben Neves to release Matt Doherty down the right before the Irishman teed up Hélder Costa.

The England international has struggled to match the standards he reached last term after emerging as Spurs’ main choice at full-back in the wake of Kyle Walker’s move to Manchester City.

With this in mind, and given the way in which Walker-Peters made an instant impact on his first Premier League start of the season, Mauricio Pochettino’s decision to leave him out was a questionable one.

It could well be that the youngster is given an instant return to the Spurs XI when they take on Cardiff City tomorrow evening, but his chances of a prolonged stay in the team appear slim.

That comes in spite of the fact his three assists have arrived from just 102 minutes of Premier League football (a rate of 2.64 per 90 minutes). The limited sample pool from which Walker-Peters’ stats are taken makes it hard to compare with Trippier, but it is notable the senior man has offered three assists in the league all season (0.21 per 90).

With 15 outings to his name already this term, Trippier is closing in on the 24 he managed in the entirety of 2017/18. Last season yielded five assists for Trippier and he created seven big chances in the league.

It is also worth noting that Trippier offers a threat from set pieces and his sole Premier league goal this season came from a free-kick against Liverpool. He remains Pochettino’s first choice, but the defeat against Wolves also saw him be out of position on a number of occasions and the Spurs boss is not shy in promoting youth.

Walker-Peters’ route to the first team could be further complicated by the return to fitness of Serge Aurier, a player who there were big hopes for when he was signed in the summer of 2017. The 26-year-old has been restricted to 428 minutes across six Premier League outings due to injury but has been back in training for the past few weeks.

He will add competition at right-back and would expect to have the quality to leapfrog Walker-Peters when he is back to full fitness. Aurier may have played fleetingly, but still managed to provide two league assists from right-back and his 2.73 tackles per 90 minutes is better than both Trippier (2.48) and Walker-Peters (zero). 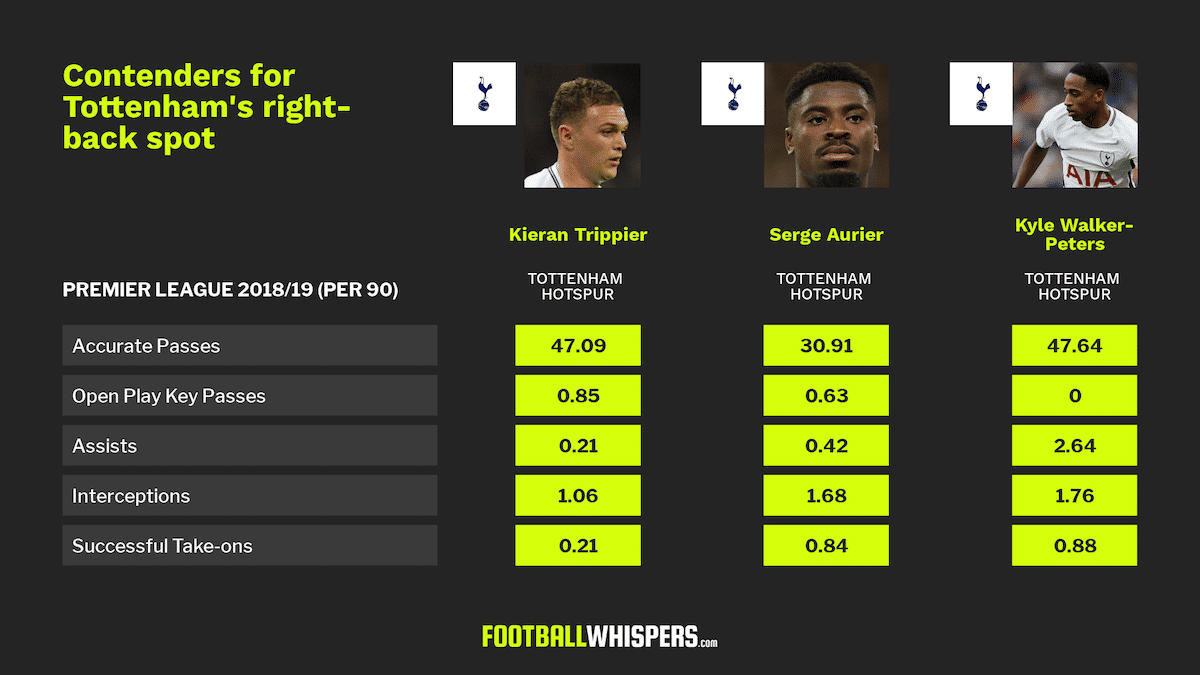 The Ivorian is also far happier running at his man on than Trippier, a requirement of the modern full-back as they are expected to do as much going forward as defensively and averages 0.84 successful take-ons per 90 minutes compared to Trippier’s 0.21.

Again, Walker-Peters suffers due to a lack of game time in this respect, but has still managed a solitary take-on at a rate of 0.88 per 90 minutes and mustered an attempt on goal.

With a trio of players all in the running for one spot, Pochettino will hope the healthy competition can bring the best out of his right-backs.

For Walker-Peters, though, the chances of impressing could well be few and far between should Spurs’ two leading options for the right-back role retain their fitness and form.

Patience may well have to be a virtue for the England Under-21 international.