After two transfer windows of inaction, Tottenham Hotspur may have to install a revolving door at their impressive new stadium this summer.

Reports suggest Mauricio Pochettino's purse strings will finally be loosened, but, according to the Evening Standard, Spurs are also open to selling as many as 12 players.

There are a number of players of the fringes of the squad – such as George-Kévin Nkoudou and Vincent Janssen – who are almost certain to be shipped out.

Here, we look at seven other Tottenham players who could soon be plying their trade elsewhere. 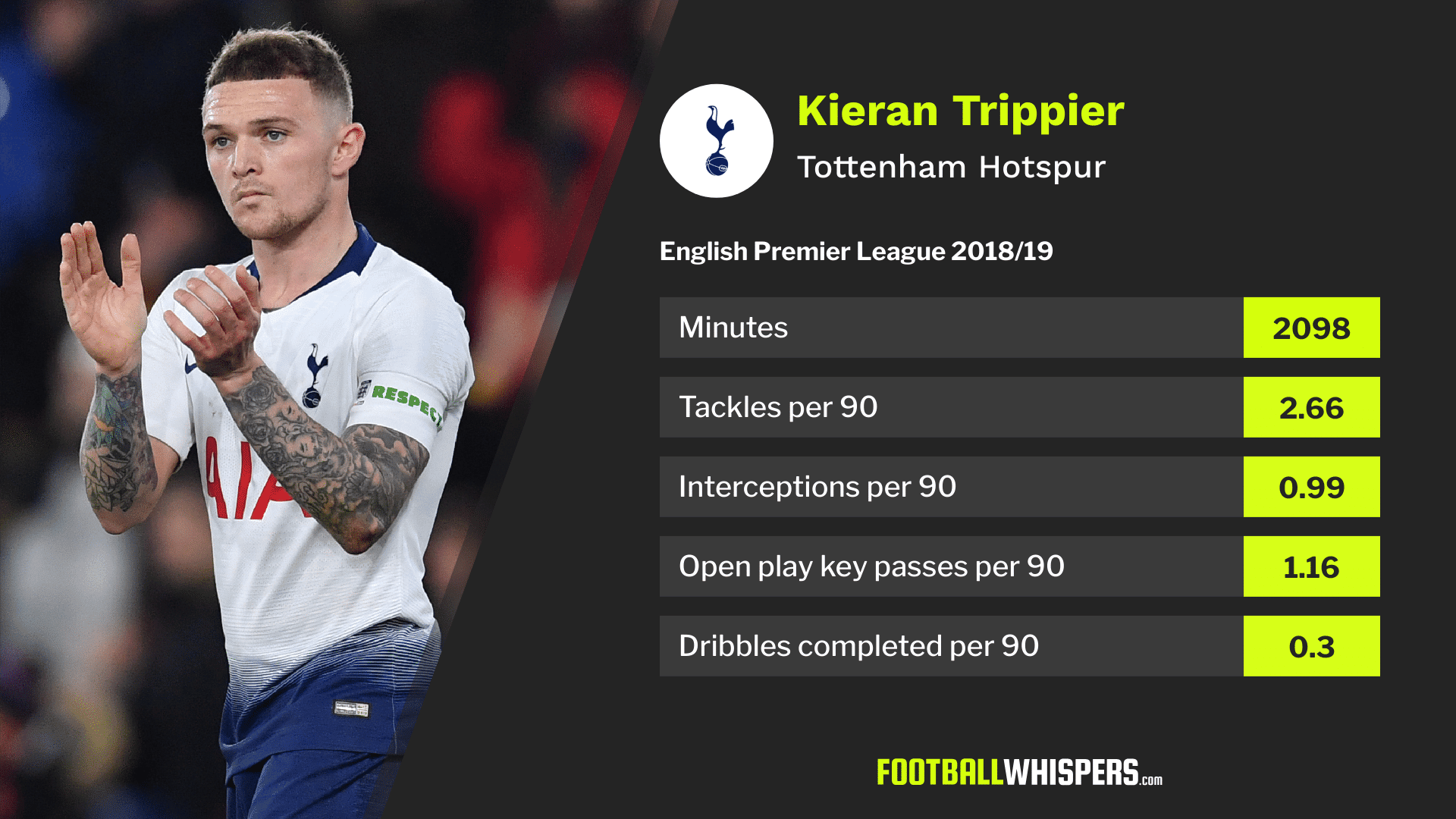 Right-back Trippier emerged from England's run to the semi-finals of last summer's World Cup as one of the stars of Gareth Southgate's Three Lions, but the former Burnley defender has been desperately short of form this season.

Still a superb crosser, the 28-year-old has come in for criticism this term for his sub-par defensive work.

It has been too common a theme for Tripper this season to be outfoxed by opposition wingers, with the ex-Manchester City youngster guilty of clumsiness in challenges, lapses of concentration and positional indiscipline.

His embarrassing own goal in February's defeat to Chelsea encapsulated Trippier's season.

At Spurs since his £7.9million move from Lyon in 2012, Lloris has been an integral part of the club's ascension into one of the Premier League's best teams, consistent top-four finishers and a match for the bigger-budgeted elite at home and in Europe.

But this has been the shakiest season of Lloris' time at Tottenham. The French goalkeeper, who reached the pinnacle of the game when lifting the World Cup with Les Bleus last summer, has endured an error-strewn campaign.

The 32-year-old's most recent faux pas came when Spurs were within seconds of securing point at Anfield, only for his spill to result in a Toby Alderweireld own goal and a Liverpool win.

No longer the reliable custodian he once was, Spurs may need to replace Lloris ahead of next season.

A £30million signing in the wake of Gareth Bale's world-record move to Real Madrid in 2013, Lamela has enjoyed a topsy-turvy career with Spurs.

Initially taking time to settle, the Argentine wide man struggled to justify his price tag in his first season with the club.

But then his flashes of stupendous skill were married with spells of sustained fine form in between, with the former Roma attacker developing a greater tactical understanding and work-rate, becoming a regular starter in 2014/15 and 2015/16

A mysterious hip injury stopped Lamela in his tracks in his fourth season with the club, though, limiting him to just six Premier League starts in 2016/17.

And with just eight top-flight starts under his belt this term, the marquee signing of 2013 is now little more than a rotation option for Pochettino.

Signed off the back of an impressive 15-goal campaign with Swansea City in 2017, Spain international striker Llorente was brought in to provide back-up to Harry Kane at the point of the Spurs attack.

But, two seasons in, the 33-year-old former Juventus and Athletic Club man has netted just twice in the Premier League for Spurs.

Although a usefully powerful aerial presence, Llorente is stylistically unsuited to the way Tottenham play under Pochettino, lacking pace, mobility and ingenuity.

Tottenham's search for an able deputy for Kane continues, with the Llorente experiment another strikeout.

Aurier was a controversial purchase from Paris Saint-Germain in August 2017, a player with a chequered disciplinary record on and off the pitch, but a talented full-back who could be an asset if motivated and in form.

A motivated and in-form Aurier has been a rare sight over the last two years, though. The Ivory Coast defender has started just six Premier League games this season, and even though Trippier's form has been sketchy, the former PSG man doesn't appear to be relied upon.

Spurs are being linked with a big-money move for 21-year-old Crystal Palace right-back Aaron Wan-Bissaka, signalling Pochettino's desire to revamp his options in the position.

With more than 100 Premier League appearances for the club since his 2014 move from Swansea, left-back Davies has been solid, if unspectacular, for Spurs.

The Wales international, still only 25 years old, has been edged out of Pochettino's first-choice XI this season by Danny Rose's return to form at fitness.

Although Davies is a dependable squad player, it is conceivable that Spurs will be open to offers for the defender this summer, with the Welshman lacking the top-line quality to challenge for a starting berth at a club with Champions League ambitions.

A pre-season knee injury disrupted Wanyama's start to the 2018/19 campaign, and the Kenyan midfielder now finds himself some way down Pochettino's hierarchy of options in the middle of the field.

At his best, the former Southampton player is a fine ball-winner, astute in protecting the space in front of the back four and a safe pair of hands in possession.

But he does not offer the kind of pass mastery Harry Winks provides from the base of midfield, constructing moves from deep and even now threatening goal more regularly.

And positional rival Eric Dier is a more valuable asset due to his ability to also slot in at centre-back if needed.