Mauricio Pochettino is in danger of turning Tottenham into the new Arsenal such is the consistency at which he’s achieved qualification for the Champions League.

But despite finishing as the highest-placed London club for the first time since 1995 it’s been a bittersweet season for Spurs with missed opportunities in the FA Cup and Champions League, competitions they have the credentials to be genuine challengers.

Pochettino’s quest for a trophy goes on but the Argentine has firmly established the club in the Premier League elite – no mean feat considering so many years of underachievement – and done so in a campaign of 38 away games.

With a new stadium to move into these are halcyon days, but the question now is: how to make the next step and become genuine title contenders?

Tottenham may not be able to match the spending of the Manchester clubs or even Chelsea, for that matter, but they have proven down the years adept at scouting and signing players of value as opposed to headline names.

So what do they need to do now?

Every once or twice a season a brief debate is held around Hugo Lloris. Despite being a 96-capped France international, captain for club and country and a perennial top 10-15 goalkeeper in the world since his Lyon days, Lloris is bizarrely divisive player.

By the very nature of their job, any mistake a goalkeeper makes is likely to result in a goal and whenever the Frenchman does so, it sparks questions about his suitability for a team aiming to win a major trophy.

This season there were notable faux pas against Chelsea (twice) and Stoke which had led to the slightly alarming statistic that over the last three Premier League seasons no goalkeeper has committed as many errors leading to goals as he has (10) or mistakes resulting in shots (20).

But while these are alarming numbers, they need to be considered against what Lloris does bring to the team: namely his distribution, sweeping abilities and shot stopping – admittedly a standard tenant of every top-class keeper but Lloris does make some outrageously impressive saves.

Lloris ranks second among Premier League goalkeepers this year for average passes per 90 with 20.62 at an accuracy of 96.2 per cent while in terms of sweeper clearances he’s only second behind Manchester City’s Ederson with 35.

Spurs are also one of only six sides in the Premier League whose goals conceded (32) is below their opposition’s expected goals (34.59). It’s simplistic to attribute all that to Lloris but it’s certainly of note.

He’s not perfect but he’s still a fine goalkeeper and the truth of the matter is it would be very difficult to find a replacement anywhere near his stature.

There may, however, be opportunity for Spurs to start grooming his eventual successor or a more consistent challenger to his position with Paulo Gazzaniga a good No3 rather than a genuine contender for the main job.

Spurs have boasted two of the best in the Premier League this season in Davinson Sánchez. In fact, there’s a strong argument that the Belgian could be considered the best centre-back in the world right now, on current form and consistency over the season.

Alongside him has been Sánchez whose potential, at 21, is staggering considering the body of work he has already accumulated and how comfortably he’s slotted into English football under the pressure of playing for one of the country’s premier teams.

The Colombian isn’t quite the level of passer as Vertonghen as he ranks 12th for accurate passes per 90 (59.25 at 83.5 accuracy), while his heading (2.6 duels won at 41.7 per cent success) and tackling (1.35 at 44.7 per cent accuracy) need work but the two have dovetailed together nicely and excelled.

Eric Dier offers some reinforcement as a third centre-back but the England international’s best position is as a holding midfield which means, with a Toby Alderweireld-size hole soon to be filled, Spurs are definitely in the market for a new centre-back.

Alderweireld’s contract impasse means he’s scarcely featured until recently and his exile hasn’t been as keenly felt as first thought. But what it has done is largely forced Pochettino’s hand and made him start a four-man defence in 26 of 37 games.

Adding a third centre-back into the squad – and Ajax’s Matthijs De Ligt is a Tottenham transfer target according to reports – would not only give Pochettino fresh options but allow Vertonghen to rest with the 31-year-old partial to suffering niggling injuries over the course of a campaign.

Kieran Trippier has been Spurs’ most improved this season with the right-back seeing off the challenge of new arrival Serge Aurier to become a fixture in the side and a staple of Gareth Southgate’s England team.

Trippier has been their joint second-most creative player with 1.9 key passes per 90 (the most in the league for right-backs) plus delivered five assists, all to Harry Kane – the joint-second highest assister to scorer pairing in the league.

When Aurier’s been good, he’s looked very good indeed – and he leads the club for tackles (3.0) and interceptions per 90 (2.0) – but it’s been a fluctuating season from the Ivorian with just 16 Premier League starts, much of that down to the form of Trippier.

On the left, Ben Davies to start 26 Premier League games and the Welshman has been a model of consistency. His six assists is a career high and he’s produced solid numbers for tackles (1.8) and key passes per 90 (1.8).

What Davies doesn’t do, in contrast to Rose, is provide thrust and pace as an attacking outlet. The England international has made just eight league starts but his 1.3 dribbles per 90 far exceeds Davies’ 0.6.

Rose’s future is still a bone of contention for Pochettino with Manchester United potentially back in the mix. Given how little he’s played this term and how dependable Davies has been it seems silly to keep him.

However, Tottenham should still be targeting a Rose-type; someone who offers defensive security but a bit more spice in the final third, capable of beating a defender and opening the field up for others. There’s a 17-year-old at Fulham who fits just the bill…

It’s perhaps Pochettino’s biggest area of concern this summer. Dier has maintained his solid 7/10 performance while Harry Winks looks to be developing into a central creator of real promise.

Victor Wanyama’s season has been severely disrupted by injury while Moussa Sissoko continues to frustrate every time he steps onto the field. Both could find their days numbered if suitable replacements can be found, or if Winks progresses ahead of schedule.

This is ignoring the real elephant in the room for Tottenham and that is someone who has been an area of considerable strength.

In Mousa Dembélé, Spurs have been blessed with a midfielder equally capable of breaking up opposition possession as he is in effortlessly gliding past defenders and stitching play together. 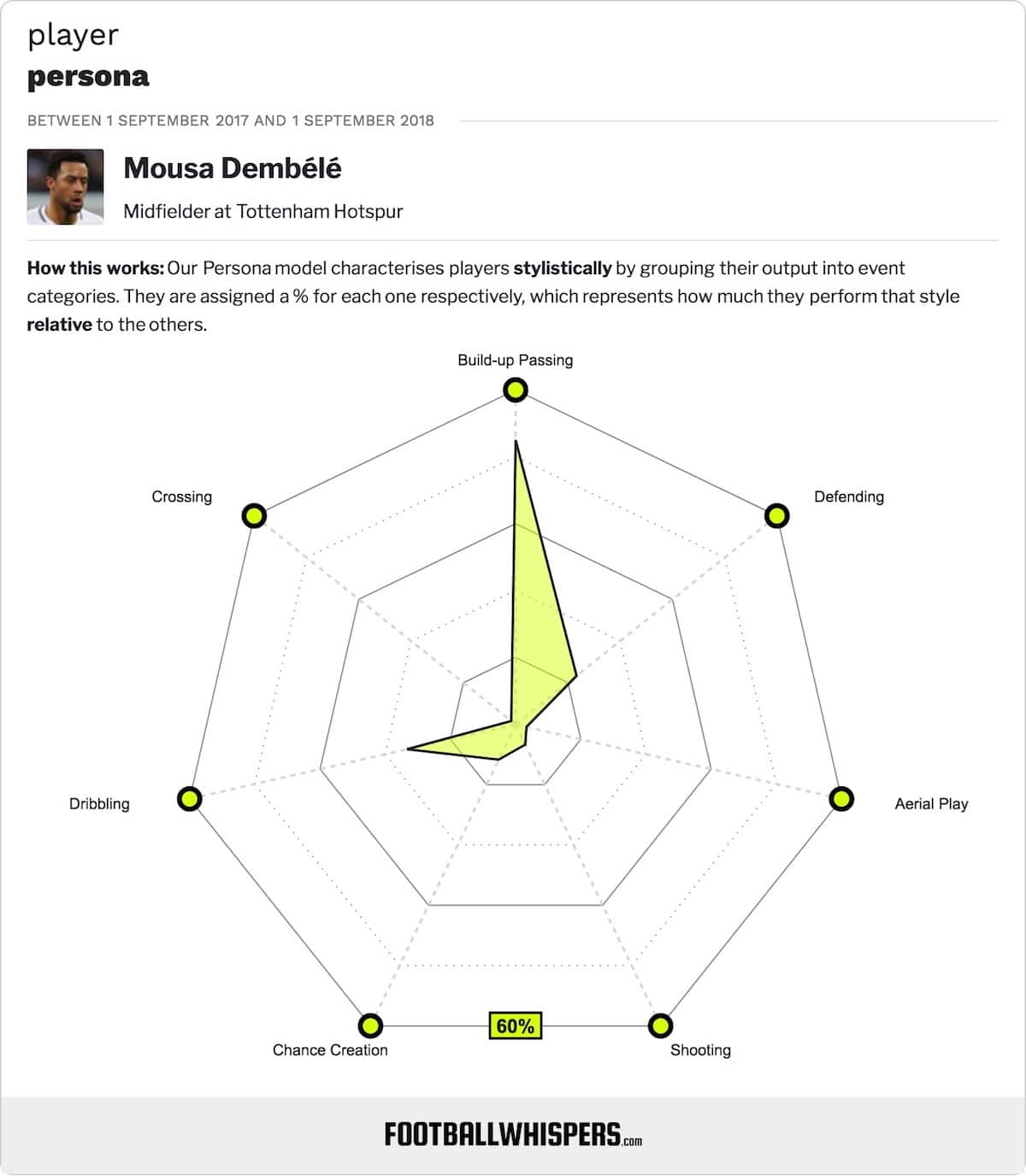 The problem with Dembélé is his body is letting him down with increasing regularity. For such a key component of Pochettino’s starting XI, 21 league starts is not enough. Only once has he played more than 30 matches in a Tottenham shirt, back in 2012/13.

There is also the small matter of Dembele’s own hints that he wants to test himself in a new league as he enters the final year of his contract in north London.

With patience all but up surrounding Sissoko, Dembele likely to depart and concerns over Wanyama’s long-term suitability, central midfield is an area in need of urgent surgery not to just improve Spurs but just maintain their level of performance.

Conversely, the area in front of Pochettino’s engine room is where he should feel most at peace with.

Christian Eriksen remains fantastic – ten goals, ten assists and 2.6 assists per 90 – and although his creativity isn’t quite at the level of 2016/17 – 15 assists and 3.2 key passes per 90 – it’s been offset by his greater goal threat.

The Dane is averaging 2.7 shots per 90 compared to 3.8 last season but has scored two more goals with a chance conversion rate increase of six per cent to ten per cent. Eriksen is a very close second behind Kane in terms of Tottenham’s best attacking assets. 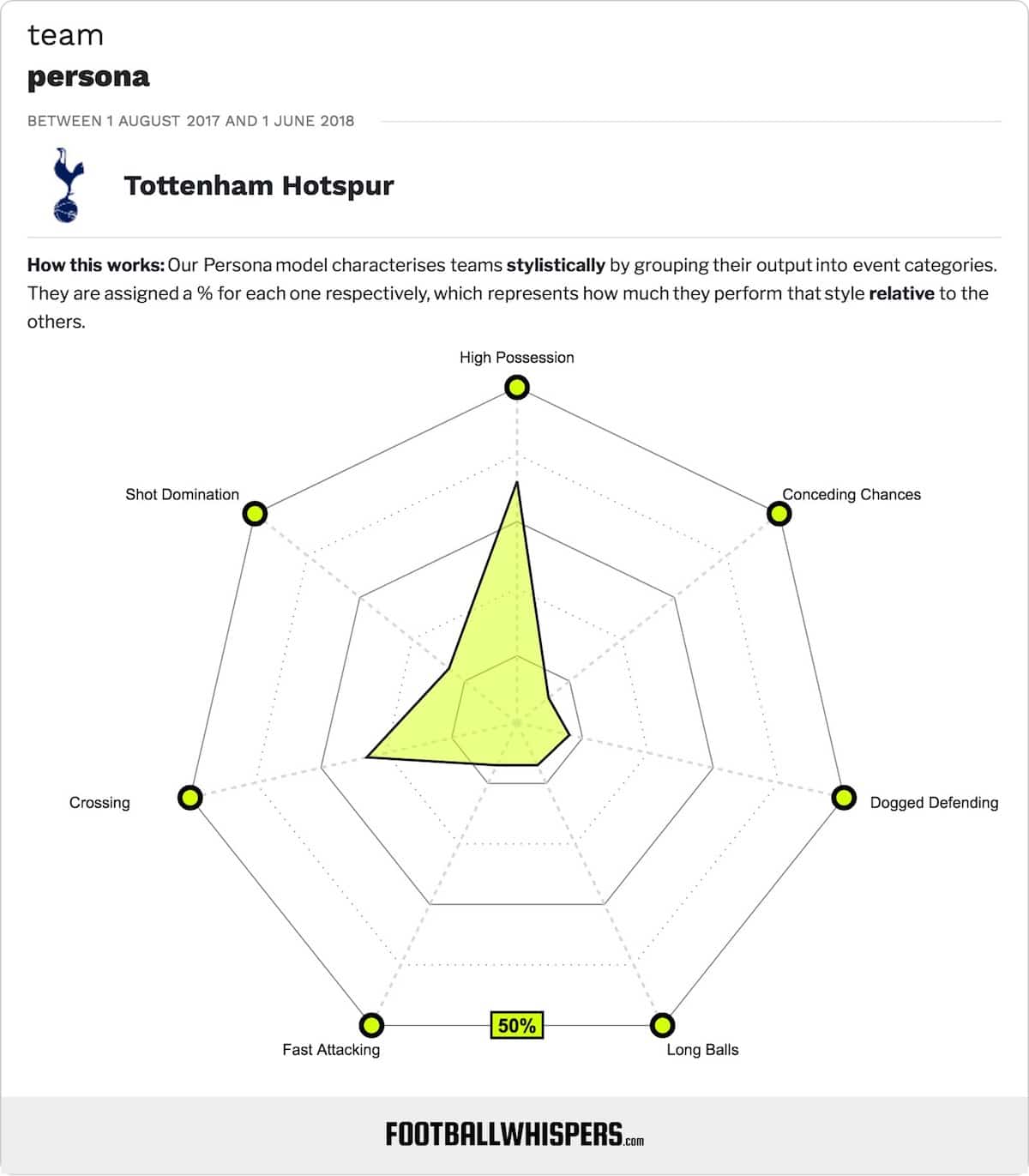 Dele Alli hasn’t had quite the stellar season everyone was expecting but is still producing good offensive numbers in shots (2.1) and key passes per 90 (1.9) while has nine Premier League goals and ten assists.

He does give the ball away too much – 77 per cent pass completion and dispossessed 2.6 times per 90 with 3.0 unsuccessful touches – but tends to receive possession in cramped areas and is still just 22. There should be much more to come.

On the flanks, Son Heung-min has delivered his most productive season with 12 league goals and six assists and is also Spurs’ second-most prolific dribbler at 2.3 per 90.

Érik Lamela’s role in the team still needs to be decided after the Argentine returned from his long-standing hip injury. He has shown flashes of his former brilliance but 18 appearances off the bench has to be frustrating for someone of his calibre.

What Tottenham should really be excited about is what Lucas Moura could be capable of in 2018/19. After half a season to settle in and acclimatise to England, the Brazilian’s has been hitting some high numbers in the little action he has received.

Lucas’ 3.4 successful dribbles per 90 is the highest at the club, while his 2.0 key passes is second to Eriksen. With a full pre-season and a consistent run of games, the Brazilian could be a very potent weapon next season.

Everything in this area starts and ends with Kane who has enjoyed another consistent and powerful campaign in front of goal with 28 goals – one every 106 minutes, a slight drop on his frankly ridiculous 87 minutes of last season.

Tottenham’s talisman leads the Premier League for expected goals with 26.71 and if it wasn’t for Mohamed Salah’s outrageously efficient time in front of goal, he’d comfortably be the best goalscorer in the league.

What Pochettino must be mindful of, outside of a world record bid emanating from the Bernabéu or Etihad Stadium, is Kane’s durability and how his position as the focal point of the attack over a tiring Premier League and Champions League campaign will start to have an effect.

Kane’s season has tailed off since the beginning of March with four goals in nine games and, while that is still an admirable ratio, he’s looked weary and lacking in sharpness.

In the short-term that has to be a concern for Southgate and England. Tottenham, meanwhile, need to find a suitable deputy for the 24-year-old, if they want to keep him at these remarkable levels into his 30s.

Son has weighed in with 12 goals but the Korean isn’t the same presence through the middle, which is why Fernando Llorente was signed. However, the Spaniard has been a disappointment with just one league goal all season.

Admittedly that’s been in a late substitute capacity, with Llorente averaging just 14 minutes per Premier League appearance, but his one start indicates he hasn’t earned the trust of Pochettino.

Vincent Janssen hasn’t exactly shone on loan at Fenerbahçe either which means finding an able deputy to his Sheriff is of paramount importance if Totttenham are to make that step and challenge Manchester City.