Tottenham Hotspur travel to face Everton this Saturday afternoon as the Premier League returns following the international break. For Mauricio Pochettino’s side, the resumption of league action is an opportunity to get back on track after an inconsistent beginning to the campaign.

Spurs entered the season with serious ambitions that were not negated by a comparatively modest summer window in which they brought in five players while making a net gain in the transfer market. However, defeat to Chelsea and a draw at home to Burnley have left them with a slightly disappointing four points from a possible nine.

Pochettino experimented with a 4-3-2-1 in their only defeat of the season so far, to Antonio Conte’s reigning champions, but will likely stick with the tried and trusted 4-2-3-1 for this weekend’s match. When selecting the team, he will be without Danny Rose, Victor Wanyama and Erik Lamela, but Kieran Trippier is available again and will compete with new signing Serge Aurier for a starting spot.

Tottenham should go with a line-up featuring Mousa Dembélé in a two-man midfield and an attacking midfield three of Son Heung-min, Christian Eriksen and Dele Alli.

Here, Football Whispers explains the reasoning behind this choice of line-up, the personnel selected, and argues that Spurs’ movement will be absolutely crucial to breaking down a defensively resolute Everton side.

One of Ronald Koeman’s first objectives upon being appointed Everton manager was to strengthen their defence. Roberto Martínez’s time in charge had been defined by weakness at the back, and the Dutchman wasted no time in correcting this.

Now the Merseyside outfit are one of the tougher Premier League teams to break down, particularly when focusing specifically on not conceding. This was shown most clearly in their second game of the season, away to Manchester City, where they picked up a good point against the odds.

Against Tottenham, Koeman will likely instruct his side to once again focus on their play without the ball. While in their opener against Stoke City Everton enjoyed 62 per cent of ball possession, they had a mere 35 per cent against Pep Guardiola’s title hopefuls and 43 per cent against Chelsea.

Even though this weekend’s clash takes place at their Goodison Park home, the Toffees will probably take a similarly defensive stance in the match.

When up against quality opposition, Everton tend to take up a low block defensively. They will likely do this again on Saturday afternoon, with Koeman perhaps opting for the rough 3-5-2 shape he tends to favour. They will also take a man-oriented approach, with each player responsible for man-marking any Tottenham player that comes into their zone.

This particular aspect of their play was clearly on show in the recent games against Chelsea, as seen in the below still, and Manchester City. 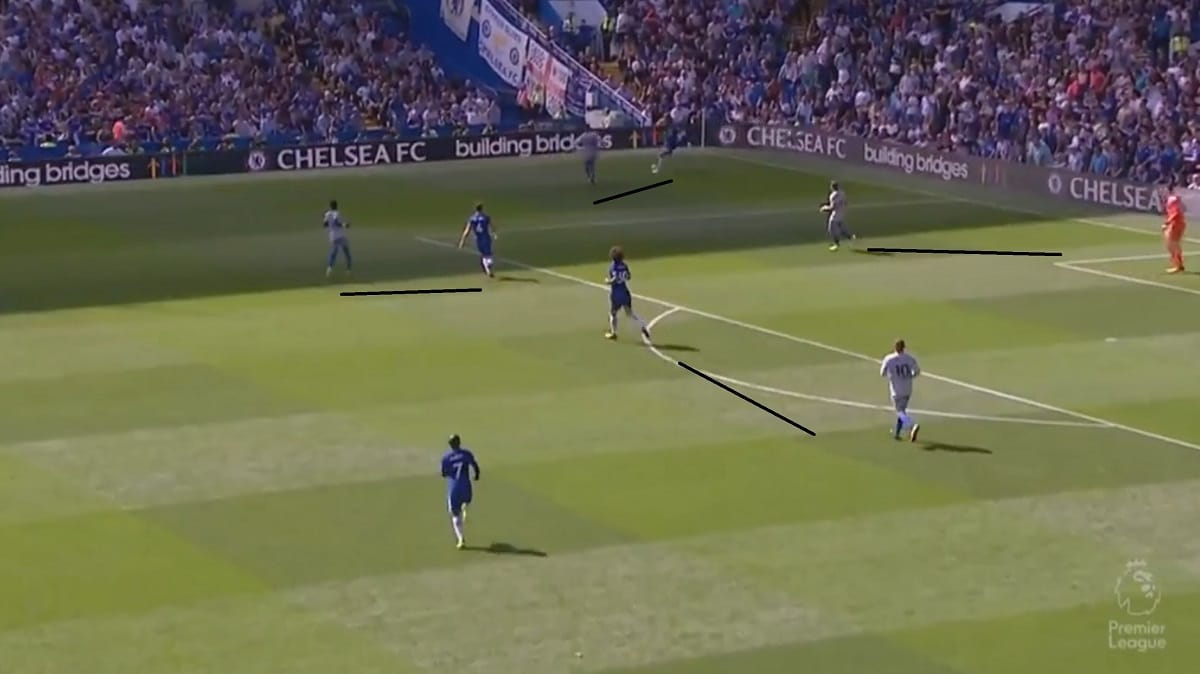 Everton press high in the opposition half man-to-man, something that is illustrated by the black lines in the above still. Against Tottenham they may play similarly, forgoing possession and attempting to stifle Pochettino’s men.

Intensely man-oriented marking, such as that used by Everton, does have its issues.

One of the most obvious is that it is reactive and can therefore lead to spaces being opened up in the defending team should the attacking side co-ordinate its movements effectively.

Manchester City were unable to beat Koeman’s side, but they did show, on numerous occasions, the issues that quality movement in and around the final third can cause a team with an emphasis on man-to-man defending.

The below still is a good example.

Gabriel Jesus peels away from the frontline and drops deep. Michael Keane, man-marking the opponent in his zone, follows the Brazilian. This series of actions creates a wide open gap in Everton’s back five. 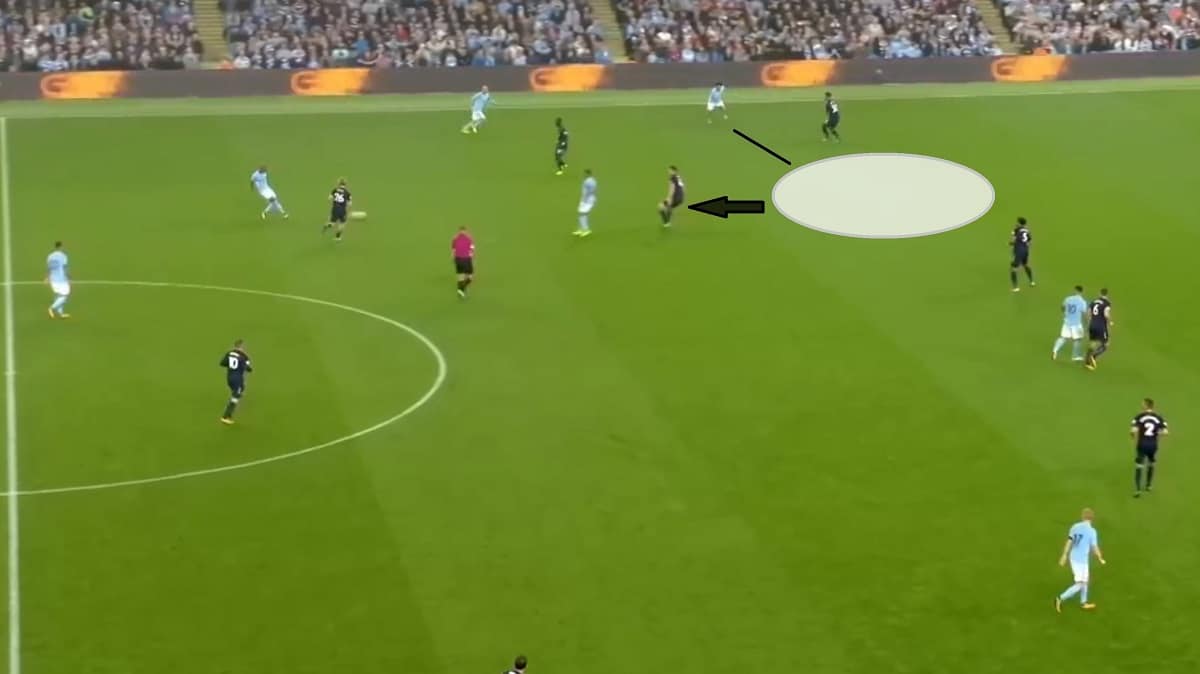 Leroy Sané, who began moving inward when his team-mate dropped back, then attempts to exploit this gap. In turn Fernandinho, who noticed the movements of his attacking team-mates, bypasses Jesus to play a pass through to Sané.

Tottenham can learn from this. They are one of the finest attacking sides in the Premier League and movement off the ball is a large reason behind their productivity. If they can avoid remaining static as too many Manchester City players did for too often, they can create and exploit spaces in Everton’s back line.

The full-backs in Pochettino’s 4-2-3-1 – probably Trippier and Ben Davies – will need to push forward and take up high positions in the attacking phase. This will in turn push back their opponent’s wing-backs and free up space for Spurs to build possession from the back effectively.

Dembélé’s selection in the two-man central midfield could also be integral; the Belgian is a remarkable combination of strong physique and exceptional technique, meaning he can carry the ball through pressure despite close attention from an opponent or two.

This is proven statistically as, according to WhoScored, he completes 3.3 dribbles per game. That figure is almost twice the amount of Spurs’ next most effective dribbler, Kane. Against a man-oriented Everton side, these qualities present a good opportunity to win one-on-one battles.

In addition, the selection of Son in attacking midfield is important. The South Korean is one of the most direct and incisive attackers available to Pochettino and his combination of pace and dribbling skill will be important against deep, man-oriented opposition.

Most important of all to Tottenham’s chances of success against Everton are Eriksen and Alli, whose movement in and around the final third could cause serious issues for the home side.

The duo are highly intelligent and operate well in tandem, varying their runs and positions in order to create space for one another, as well as the rest of their team-mates.

One example of this is seen in the below still, where Eriksen scans the pitch and notices Alli’s position in relation to Burnley’s man-oriented midfield. He drops deeper, distracting and unbalancing the opposition and giving his English midfield team-mate, circled, an opportunity to exploit space between the lines. 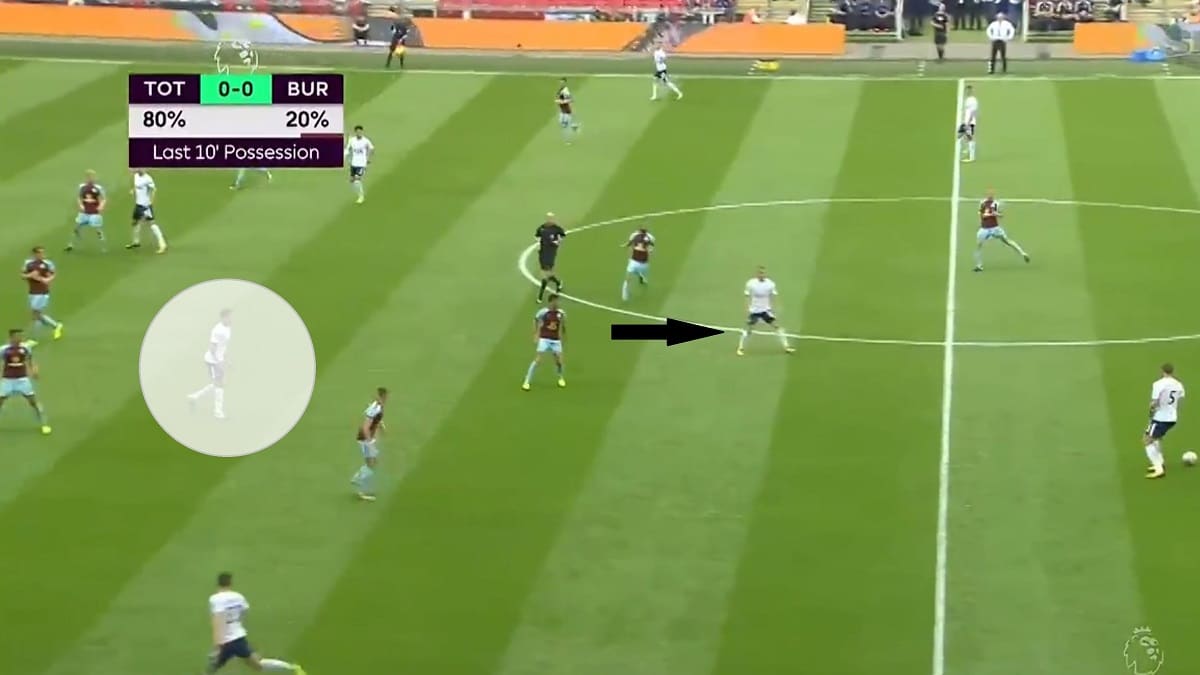 The Dane is an expert reader of the game happening around him, constantly glancing in different directions to assess the situation and decide where to place himself on the pitch. In the very same game against Burnley, he showed another example of his awareness by moving on the blind side of the opposition midfield.

With the opposition drawn towards the ball-carrier, who in the still below is Toby Alderweireld, Eriksen drifts in behind their midfield line and between the two defending players. By doing this he offers a pass to his Belgian team-mate that could cut out at least two opponents in one movement. 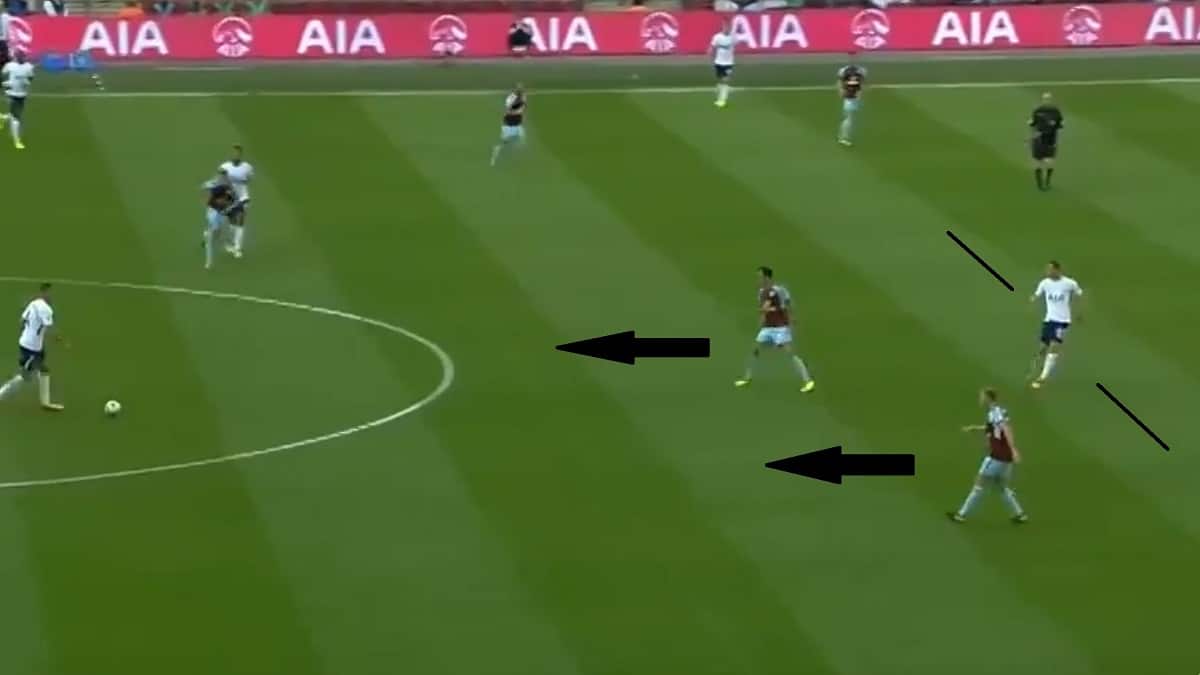 Everton are a dogged defensive unit filled with quality individuals who could threaten on the counter-attack, but Spurs’ movement could prove too much for them.

With the high positioning of their full-backs, the driving runs and one-on-one specialism of Dembélé, and the spatial awareness of Eriksen and Alli, they can break down their Saturday afternoon opponents and claim three significant points.