All that lasted twenty-one seconds. That was it. That was the Champions League final. Wonderment. Intrigue. Gone inside half a minute. That's not to say the match was dead at that point, but the remainder of the ninety minutes was largely forgettable.

So let's talk about those twenty-one seconds. They're what really mattered, after all.

He chipped a ball over the Spurs defence for Sadio Mané. The Senegalese international squared up Trippier, clipped a cross into the penalty area and there was Moussa Sissoko.

The French midfielder wasn't doing much. Then suddenly he was doing everything. Mané's cross struck Sissoko's chest and the ball ricocheted onto his outstretched arm. Never has issuing a tactical instruction proven so costly.

A penalty was awarded. Yes, it was harsh, but such is the UEFA directive over handballs that a spot-kick was inevitable. Mohamed Salah did the rest; he fried past Hugo Lloris and Liverpool had a lead they were never in danger of losing.

Tottenham tried, yet were far from their best. Liverpool kept them at bay with little trouble. And when Divock Origi fired home a second Reds goal with three minutes to play, victory was confirmed.

Liverpool had their sixth European Cup. Spurs were left to wonder what might have been.

Here we analyse where the clash between the two Premier League sides and identify where the game was won and lost.

Liverpool's mentality befitting of the club

Opposition fans may not like to admit it but there are few clubs in world football bigger than Liverpool. The history, the tradition, the historical success, not many can match it.

On the pitch, over the last two decades, the Reds haven't always lived up to their grandeur. Klopp has helped change that.

Liverpool have been restored, taken back to the mentality which was instilled by Bill Shankly and Bob Paisley. They will challenge for trophies, and they will win them even when not at their best.

That was the case in Madrid. Tottenham were perhaps the better side at the Wanda Metropolitano, they certainly dictated possession and the tempo of the game. Tellingly, after 37 minutes, Liverpool had completed just 69 passes. Yet their lead was comfortable.

It's what this Liverpool do, and what previous interactions were incapable of –  even Klopp's side of 2017/18 couldn't persevere like their 2018/19 equivalents.

It may not be pretty, or even memorable, but they will find a way to win. 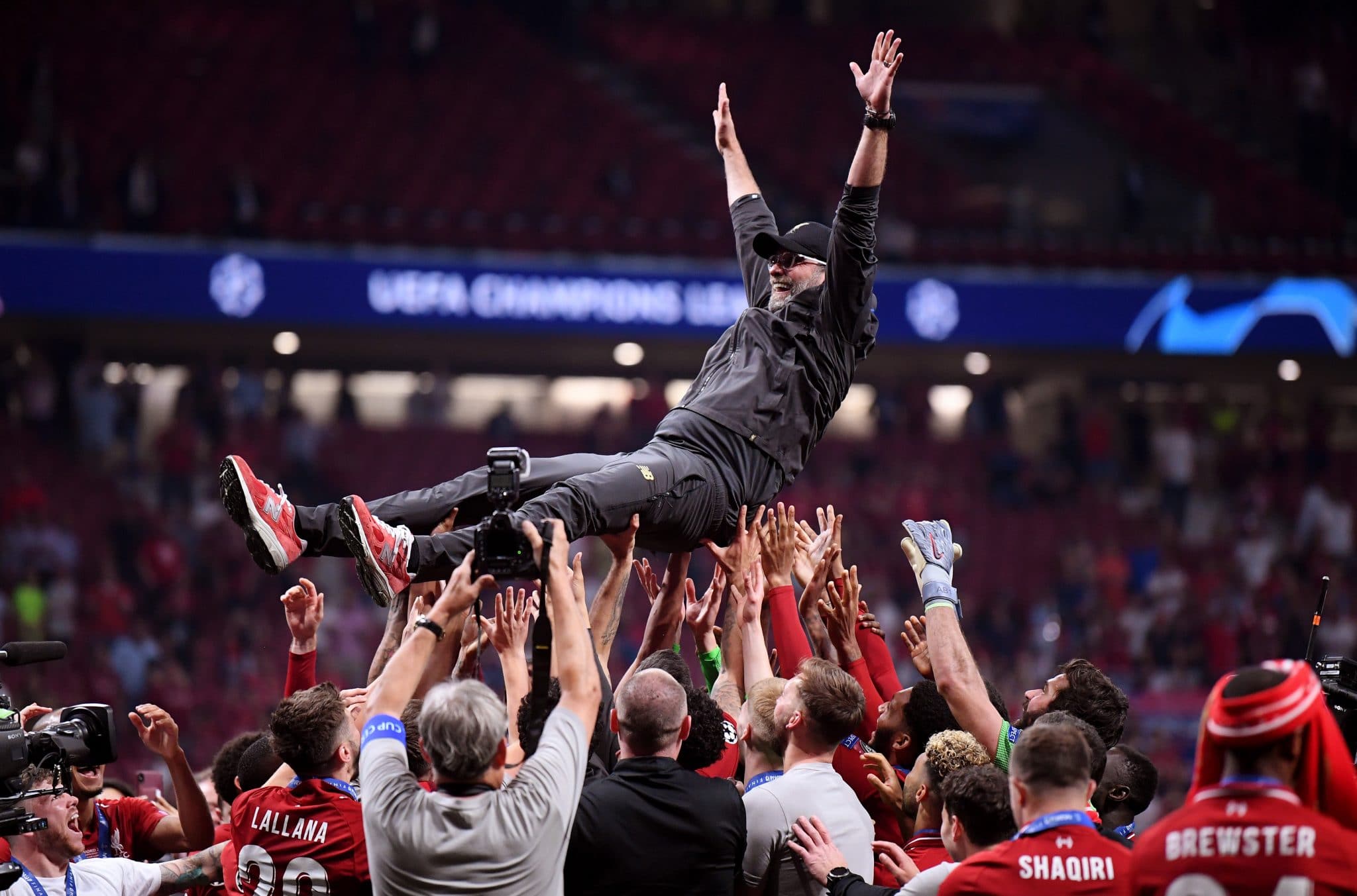 Lesser sides would have capitulated after such an awful start to the game, to their credit Tottenham didn't. Instead, Spurs kept possession and gained a foothold in the contest.

They were very much helped by Liverpool, however. Under Klopp the Reds have built a reputation as one of the world's most effective pressing sides. They restrict space, close down passing avenues and close down the man in possession.

During the opening 45 minutes at the Wanda, very little of that was evident. When Tottenham's defence were in possession, Mané and Salah moved into press but those behind them did not. It left gaps across the pitch and Spurs were able to advance through the middle third on several occasions.

The problem was that Tottenham approached the Liverpool penalty area, the wrong pass was often played or attacks simply ground to a halt through lack of movement, particularly from Kane.

In the second period, Liverpool dropped deeper and attempted to contain Spurs. The onus was on Pocettino's side to shift the ball at pace and pull the Reds' backline and midfield out of position. They weren't able to do it.

Too often Tottenham resorted to a hopeful raking pass forward from either Toby Alderweireld or Jan Vertonghen, but van Dijk and Joël Matip were rarely troubled.

As discussed in this article, Tottenham's talisman is never quite the same in the immediate matches after injury. And Kane hadn't played in a competitive match in 53 days.

So the big decision for Pochettino was whether the England captain was fit enough to start. The Spurs manager decided the striker was, although he was damned if he did and damned if he didn't.

In the opening 45 minutes, Kane was off the pace. He was well handled by van Dijk and Matip and his movement was sluggish. By the half-time interval Tottenham's No.10 had touched the ball on just eleven occasions.

The hope, for those of a Spurs persuasion, would have been that Kane had shaken off the ring rust in the first half. That he would be the clinical, decisive Kane they know and love in the second period. 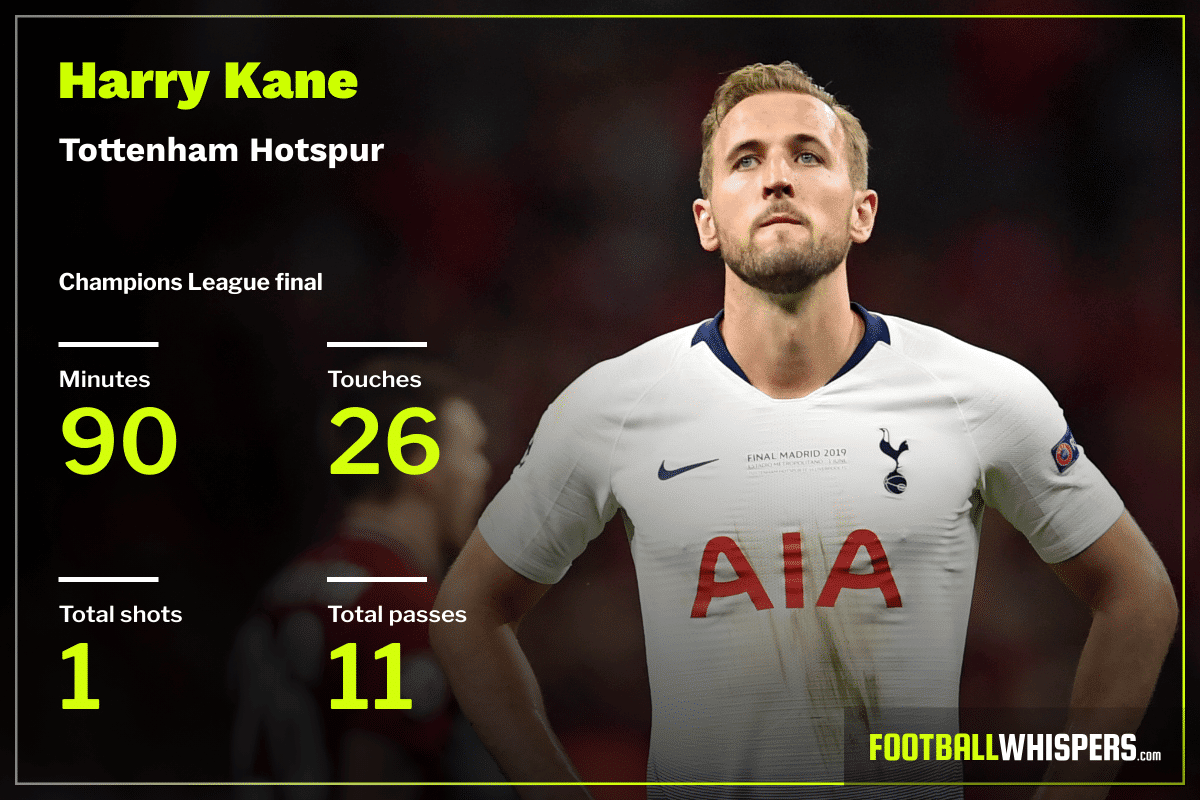 Unfortunately, it was more of the same. Kane remained a peripheral figure, Tottenham attacks, so often of which he is the focal point, bypassed him constantly.

Kane played ninety minutes, he mustered just one shot. It was on target but in second-half stoppage time. By that point the final had already been decided.