West Ham United have qualified for the quarter-finals of the Carabao Cup after completing an astonishing comeback against Tottenham Hotspur on Wednesday night to win 3-2 at Wembley.

It looked done and dusted at half-time with the home side 2-0 up. But the Hammers, presumably after a stern team-talk from Slaven Bilić, scored three unanswered goals and put their name in the hat for the next round.

Moussa Sissoko opened the scoring when Fernando Llorente and Son Heung-min combined beautifully to tear apart West Ham on the break. Then, before the interval, Dele Alli's deflected shot found the far corner past Adrían.

A double from André Ayew  after the restart sparked the away side into life and gave them hope. They were up for the fight and Spurs couldn't react. Angelo Ogbonna's header from a corner sealed a vital win for a club under pressure.

Here are five points to take away from Spurs 3-2 defeat to West Ham in the Carabao Cup.

Hammers boss Bilić started the game playing 3-5-2. Typically  Manuel Lanzini would occupy the playmaker role, taking up the position behind the forwards. But that never happened.

In the first half, the Argentine midfielder was expected to keep level with Edimilson Fernandes, with Mark Noble anchoring the middle of the park. 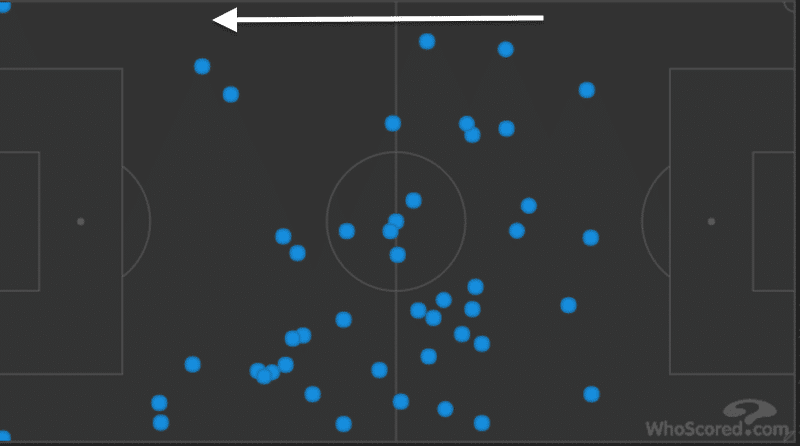 Above is Lanzini’s touch map from the first half, according to WhoScored. You can see how much ground he was covering and how little is in the attacking third.

That changed in the second half and it opened up the Hammers attack and got them back in the match. 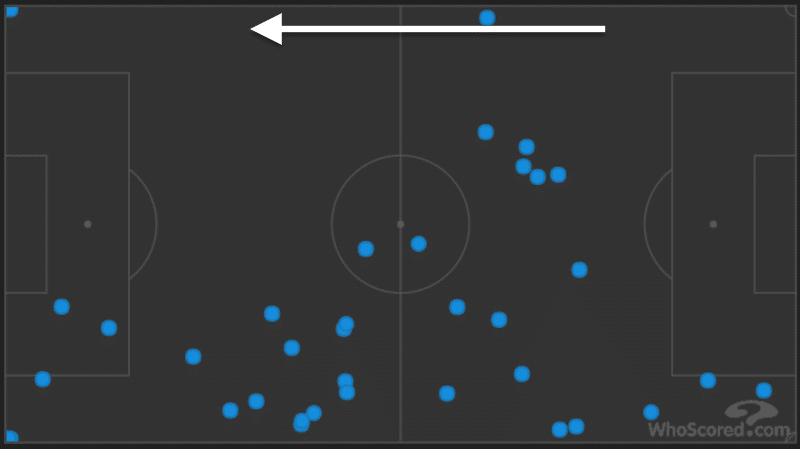 Lanzini played more to the left, allowed to get forward and support Ayew and Carroll and it paid off.

He supplied the assist for Ayew’s second and then, with his confidence high, curled in a pin-point corner to find Ogbonna’s head for the winner.

People may have been surprised that Bilić didn’t make any personnel changes at the break, but that one little tweak helped the Hammers secure an astonishing victory.

Kouyaté Not A Defender

Last season, when West Ham United were shipping goals for fun and playing a back three, Football Whispers tried to find the issue in their defence.

The answer was Cheikhou Kouyaté.

Bilić, moving away from the back four that lost to Brighton on Friday, switched to 3-5-2 on Wednesday with the Senegalese on the right of the three. But the Hammers' defence was a shambles.

For the opening goal, the 27-year-old was sucked towards Danny Rose, without the left-back being in an attacking area. Kouyaté was up near the opposition penalty area. Spurs attacked on the counter, he was out of position, and the defence suffered.

Declan Rice was also pulled out of his area, trying to cover the danger down the left, and Sissoko was left unmarked to apply the finish.

Things didn’t get better with the second. At one point, all three centre-backs were in the right position. Then Kouyaté rushed out to close down Son and the Korean slipped past West Ham's defence and set up Alli for the deflected finish.

There is nothing wrong with playing a back three when you have the players to make it work. But if you are playing Kouyaté at right centre-back, you don’t have the right players.

Ultimately it didn't cost West Ham on the night, but they were helped by Spurs' poor second half display.

On Wednesday he partnered the Spanish targetman with Son and it worked equally well in the first half.

The South Korean forward has the versatility and football intelligence which enables him to make an impact wherever he is on the pitch.

He’ll play up beside the forward, drop deep into the hole, or drift onto either flank to play as a winger.

For the opener, he used the space left by Kouyaté to collect Llorente’s flick, then waited for the Hammers' defence to unlock before finding Sissoko.

However, after the impact he made in the first half, the second period was very different.

Son had 62 touches of the ball in the game but less than half came after the break. He also failed to add to the three key passes he completed in the first 45.

Playing in his 100th Spurs game, you can see that the forward has all the tools, but if he wants to be considered in the same breath as Christian Eriksen and Dele Alli this season, he still needs to find his consistency when Spurs need it most.

When you start with Llorente upfront, you must do two things. Get the ball into his feet – that shaped the opened goal when he linked with Son – and give him crosses he can get his head to.

The Spanish forward was sixth in the Premier League last season for winning aerial battles with an average of 4.7 per game. The 32-year-old only won two on Wednesday, but that wasn’t down to a lack of effort on his behalf.

Spurs attempted 18 crosses against West Ham, ten of which came after 72 minutes – after Llorente left the pitch.

Trailing 2-1 and needing a goal, Pochettino took off his only recognised striker and brought on Mousa Dembélé – a player with just ten goals in 203 games.

It took away the focal point the home side had in the box.

There is very little point in lobbing crosses into the penalty area when there is no one there to get on the end of them. You are relying on Alli to replicate the two headers he scored against Chelsea at White Hart Lane last season.

West Ham’s back three combined for four aerial challenges and 22 clearances. They will deal with those balls all day, especially without the presence of a great aerial striker.

It was a strange decision from the Spurs boss and it cost them a chance to get back into the game.

Foyth In The Spotlight

Wednesday night was a opportunity for Pochettino to give 19-year-old defender Juan Foyth a run-out.

The centre-back was playing just his second 90 minutes for Spurs after joining from Estudiantes in the summer, but his first test against Premier League opposition.

It was a mixed performance from the youngster, but enough to give his coach optimism.

He had a shaky start. An early slip gave away possession in a dangerous area, but after that he found his composure.

Foyth dealt with all West Ham’s crosses fairly well, getting himself into some good positions to clear the danger.

With two successful tackles, three clearances and one blocked shot, he was solid for the hosts.

The one blot on his copybook came for Ayew’s second goal. The Argentine defender was caught napping and with Toby Alderweireld and Ben Davies stepping up, Foyth wasn’t in line and allowed Lanzini the space to get an important flick to set up the Ghanaian forward for the equaliser.

Lessons to be learnt for the new signing, but more than enough to show he is can be an important player for the future.