Tottenham Hotspur saw off White Hart Lane in style as they completed a deserved 2-1 win over Manchester United.

In the final game at the old stadium, Victor Wanyama was the unlikely first goalscorer before a second half strike from Harry Kane, a less surprising source, put Spurs in control.

Wayne Rooney pulled a goal back with 19 minutes remaining but it was only to prove a consolation.

For Tottenham, it was the perfect way to say goodbye. For Manchester United, their chances of finishing in the Premier League top four are now mathematically over.

Here's how we rated both sets of players on an emotional day at White Hart Lane.

Tottenham In The PL At White Hart Lane This Season

The Tottenham captain had fairly little to do throughout the 90 minutes.

He couldn't stop shots from Anthony Martial, with both drifting just past the post, and was left helpless for Rooney's goal as the ball took a deflection off the foot of Jan Vertonghen.

Lloris had only one other save to make during the game, not a bad way to spend his final afternoon at White Hart Lane. 6.5

Started ahead of Kyle Walker once again, Tripper was effective down the right flank.

He won all of his tackles attempted but did not cover himself in glory when Anthony Martial skipped away before crossing for Rooney for United's goal.

Was brought off for Walker after 82 minutes after landing heavily but demonstrated he is more than capable of becoming the club's first-choice right-back next season. 7

Tottenham's defence was largely untroubled in the opening half, with only Martial's shot from distance threatening the Spurs goal.

Like Vertonghen, the Belgian centre-back had a largely comfortable afternoon. Was out-muscled by Martial for the Frenchman's first chance but was solid other than that mistake.

He made five clearances, three headed clearances and his intelligent positioning meant he didn't even have to make a tackle. 7 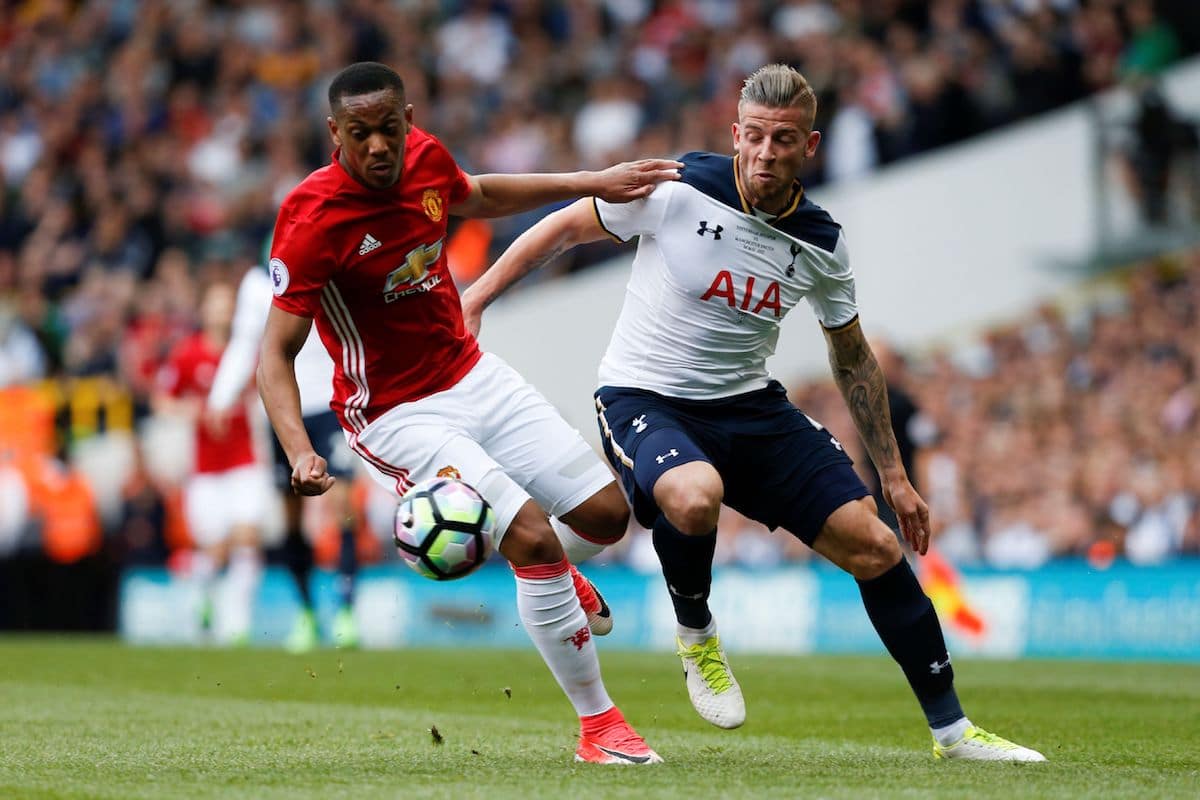 The Wales international has become increasingly assured in the absence of Danny Rose and it was his excellent cross that was met by Wanyama for Tottenham's first goal.

Defensively Davies wasn't truly tested but he did win two of his three challenges, made one interception and two clearances. Going forward his passing was a little erratic but he did complete his only take on attempted. 7

Did well to escape the attention of Wayne Rooney to head in the first goal of the game and patrolled midfield excellently.

Physically dominant and confident in possession, Wanyama helped Spurs control the game. He won five of his six tackles, made one interception and completed 88.1 per cent of his passes attempted.

He was, however, fortunate not to be sent off after a reckless challenge on Eric Bailly in the first half. 7

A reported Manchester United transfer target, Dier had a quiet but effective afternoon.

The versatile England international sat in midfield alongside Wanyama and was the more defensive of the duo. He was successful in his only tackle attempted, made two interceptions, two clearances and won two our of his three aerial duels. 7

The Dane has blossomed into one of European football's finest attacking players over the last 18 months and was instrumental in Spurs' victory despite the close attention of Axel Tuanzebe.

It was his quick thinking to take a short corner that led to Tottenham's opener and then he delivered a devilish free-kick for Spurs' second.

Eriksen was brought off in second half stoppage time but during his 90 minutes on the pitch completed 85 per cent of his passes, one take on and tellingly won back possession on several occasions. 8.5

May not have been the midfielder's most decisive display but his energy and exuberance are so crucial to Tottenham's attacking play.

Completed 11 of his 15 passes in the attacking third and would've scored the final goal at White Hart Lane had Phil Jones not got back on the line to head away his 83rd minute shot.

Spent the final ten minutes showboating and, while that wouldn't be to everyone's taste, it is a mark of how confident and comfortable the 21-year-old is. 8

"It was unbelievable and the fans deserved it. It's been a great season and it's an important win for the fans today" – @Dele_Alli #TOTMUN pic.twitter.com/3f0SOOwgl2

One of the success stories of Tottenham's season. The Korean was again full of energy and endeavour and caused United's defence problems when he came in off the left flank.

Was denied a first-half goal by de Gea after a powerful run through the middle of the visiting defence but continued to cause Phil Jones and Chris Smalling problems with his direct running.

Was replaced in the 72nd minute by Mousa Dembélé as Mauricio Pochettino looked to secure the victory. 7

Was kept largely in check during the first half as he searched for his goal on a landmark day for Spurs but, after the break, it took Kane just three minutes to strike.

Eriksen delivered a sumptuous free-kick and the England striker showed inventiveness to flick the ball the ball past de Gea from close range.

Kane linked play well throughout the remainder of the contest but wasn't able to add to his 49 goals at White Hart Lane. 7.5

Harry Kane scores his 1st PL goal v Man Utd. Cardiff are now the only team he hasn't scored against of the 25 he has faced in the PL pic.twitter.com/J97T9f43rr

In what may prove to be the Spaniard's penultimate game for Manchester United, he produced a performance that we've come to expect.

De Gea could do nothing to stop Spurs' opener but made several important first-half saves from Son and Alli to keep United in the contest.

Had less to do in the second period but was again helpless for Tottenham's second goal. 7.5

Started in the unfamiliar role right-back, the Ivorian adapted well. He didn't offer any threat going forward but was solid defensively, although it was his foul on Alli that led to Spurs' second goal.

Bailly ended the game with two clearances and was successful in every one of his four tackles. He did, however, manage only four passes in the attacking third, a mark of how United were pinned back. 7

The centre-back has endured yet another injury disrupted campaign and he looked short of match sharpness at White Hart Lane.

Struggled with the movement of Kane and Son and won only one tackle during the contest. But he did make a crucial headed clearance off the line to deny Alli and Spurs a third goal. 6

Was outstanding last season but this campaign has been disappointing for the England international.

Like Jones, Smalling struggled against Kane and found it hard to deal with the rotation of Tottenham's attacking players.

He did, however, make ten clearances which was more than any other player on the field. 6

The versatile Dutchman was selected at left-back and was steady as always. He stopped Trippier from putting crosses into the penalty area and, despite his size, won every aerial duel he attempted.

He was starved of options on the ball though and only completed a disappointing 63.3 per cent of his passes attempted. 6.5

The youngster made his second consecutive league start, this time in midfield, and was given the thankless task of trying to keep Eriksen under control.

The 19-year-old stuck to his job well and followed the Dane across the pitch but he wasn't able to nullify the Spurs No.23's influence on the contest.

Replaced on the hour mark by Ander Herrera, Tuanzebe has shown enough over his previous two appearances to suggest he is ready for more first-team football next season. 6.5

Started the contest trying to man-mark Alli but, either by instruction of out of necessity, abandoned that plan not long into the game.

The match wasn't one which allowed Carrick's best attributes to be displayed. He wasn't able to dictate Manchester United's possession and couldn't restrict Tottenham's attacks.

He completed 85.5 per cent of his passes attempted and was successful in just one of his tackles. 5.5

Rooney, who began on the left, looked determined to make amends during the remainder of the game but struggled against an energetic Spurs side.

The England international was moved into the middle of United's attack in the second half and showed his instinct in the penalty area remains sharp by turning home a Martial cross.

But it was largely a disappointing display from Rooney, whose time at Old Trafford may come to an end this summer. 6

If that is Wayne Rooney's goal, he's now the leading goalscorer for visiting teams at White Hart Lane in the Premier League era.

Much like Carrick, this wasn't a game that suited Mata's talents. He wasn't able to get on the ball and hurt Tottenham and spent much of the game chasing back and harassing Spurs' midfielders.

During his 78 minutes on the pitch, Mata managed to complete just 24 passes but none led to a chance for his team-mates. He also failed to muster a single take on and had just one shot on goal. 5.5

The winger made little impact during the first half as Spurs dominated proceedings.

His influence didn't grow in the second period and his only real involvement before being brought off in the 60th minute was a shot from the edge of the box that he dragged wide.

In his hour on the pitch, Lingard completed just 17 passes and only one take on. 5

Had little involvement in the first half as Spurs pinned United back but did threaten with a curled effort which just went wide of Lloris' post.

Was moved out to the left flank in the second period and was more of a threat. He sent a 20-yard shot just wide before teeing up Rooney's goal following an excellent run.

The 21-year-old's influence grew as the second half progressed and his powerful running resulted in Wanyama being booked for cynically fouling him. 7.5 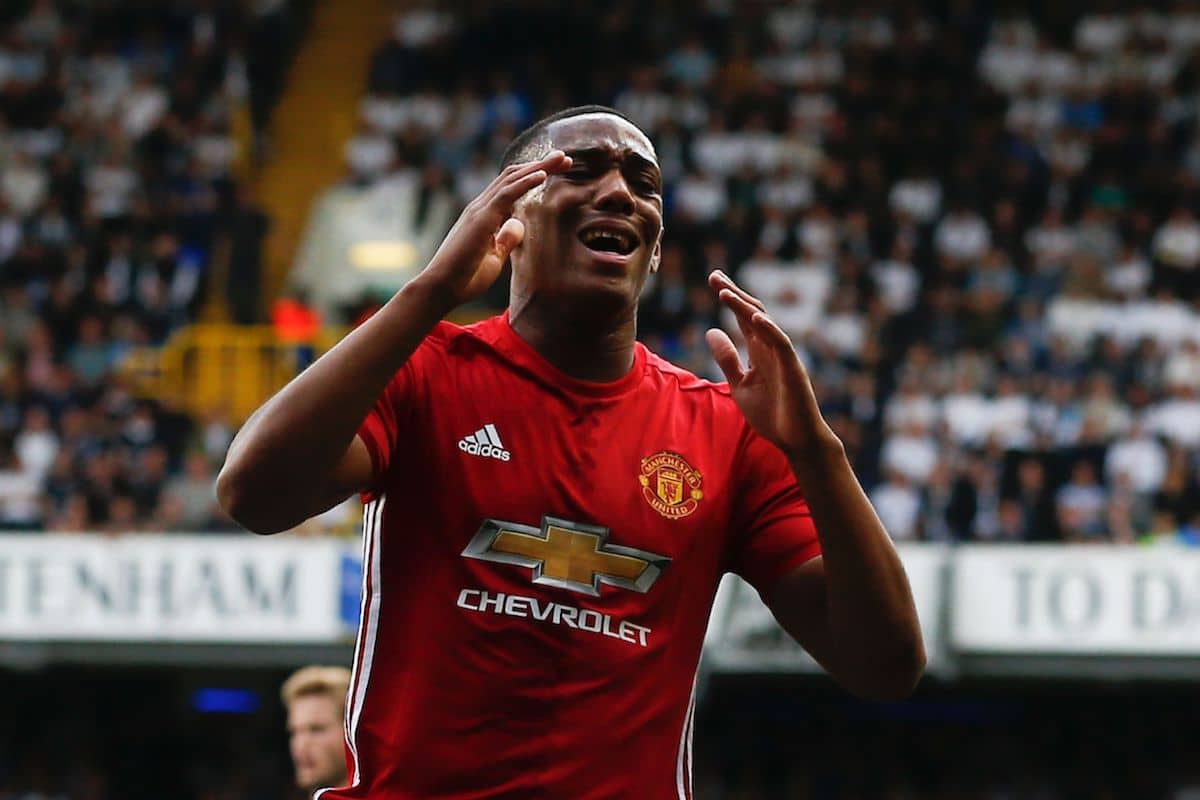