Write Chelsea off at your peril. Last season’s champions had somewhat of a smash and grab at Wembley, playing most of the game with their backs to the wall yet still coming out with three points.

Two Marcos Alonso goals either side of a Michy Batshuayi own goal were enough to see Antonio Conte’s side win against their London rivals Tottenham Hotspur.

Spurs will be somewhat bemused at not getting a point, let alone three, after their dominance.

Chelsea have found a man to properly fill their No.9 shirt in Morata

It’s been a bit of a disaster in recent years, with Fernando Torres, Steve Sidwell, Franco Di Santo and Khalid Boulahrouz all not exactly goalscoring sensations while wearing that number for the Blues (of course Sidwell and Boulahrouz weren’t strikers).

Álvaro Morata scored against Burnley, but his Wembley woes looked to have continued in the first five minutes when he had a free header in the box from six yards out. He had to score. But it went wide.

Of course he did score against Burnley though, and he is a quality striker, he showed that at Real Madrid last season despite his limited minutes on the pitch.

As the solitary man up front in a team largely set up to defend and frustrate Tottenham, he didn’t get a better chance than the one early on and often cut a frustrated figure, surprised with the physicality of the English game.

But he’ll have games a lot easier than this and it was a good all-round performance from the Spaniard, especially defensively.

The former Madrid man cleared a lot in the air from set pieces, like Didier Drogba used to do, and it was no coincidence Batshuayi scored the own goal, when Morata probably would have cleared.

Harry Kane went into the match without a Premier League goal in August, he’d gone 11 games in the month without scoring.

He hit the post against Newcastle United and did the same against Chelsea today.

The Spurs striker gave Andreas Christensen and Antonio Rüdiger an absolute torrid time in the first half, showing how the Blues back line looks a little weaker without David Luiz and Gary Cahill in it.

He had three attempts today and his all-round game was very good.

There was no sign of the England captain being bothered by failing to score in August and it was actually almost a surprise when the match ended without him finding the back of the net.

You won’t want to be Burnley as he’s likely to score then, in Spurs’ next game.

After Nemanja Matić’s brilliant start to his Manchester United career, he’s gone from being a great sell from Chelsea at £40million to one of the bargains of the season.

It wasn’t helped by the Blues losing to Arsenal in the Community Shield and Burnley in the Premier League, with Cesc Fàbregas and N’Golo Kanté failing to link up well together.

That was no surprise, it was clear Conte didn’t fancy the two together last season, and that was why Matić played so often.

Before today’s Chelsea’s midfield option on the bench was the unproven Kyle Scott, but Tiemoué Bakayoko is finally showing why they let the Serbian midfielder go.

At 23, he is much younger than Matić and is undoubtedly the option for the long term.

It was a decent debut from the Frenchman, who looked like a decent box to box midfielder unafraid to get involved with the physical side of the game.

When he gets fit, he could really prove himself indeed, even if he did give away the free-kick Tottenham scored from.

When Chelsea switched to 3-4-3 last season when 3-0 down against Arsenal, it was undoubtedly the defining moment of their title-winning campaign.

The Blues went on a 13-match unbeaten run, which was ended by Tottenham in this fixture last season.

It revolutionised English football, with many teams going on to use three at the back, and it wasn’t scorned upon like it was when Louis van Gaal tried it at Manchester United.

But it wasn’t the perfect formation, with Arsenal beating the Blues both in the FA Cup final and in the Community Shield by matching them up in a 3-4-3.

That formation actually also saw Arsenal only lose once after switching to it at the end of last season, to Tottenham as well.

Conte did maintain it was a temporary solution though, and when the Blues wanted to see matches off last season, like West Ham United away, they often switched to a 3-5-2 with Kanté, Fàbregas and the now departed Matić playing the role.

And when the teams came out here, it looked like either a 3-4-3 with Victor Moses playing further forward and César Azpilicueta at wing-back or a 3-5-2 – it was the latter.

Luiz played in a midfield role behind Kanté and debutant Bakayoko, and Chelsea packed out he midfield, with the aim of Conte giving his team more control in a crucial area of the pitch.

Perhaps, after the opening day disaster against Burnley, this could be the way forward for the Blues, even if they had fewer outlets up front.

They’d definitely need a few more midfielders through the door though to play it regularly – even if Luiz grew into the game and was an interception machine. 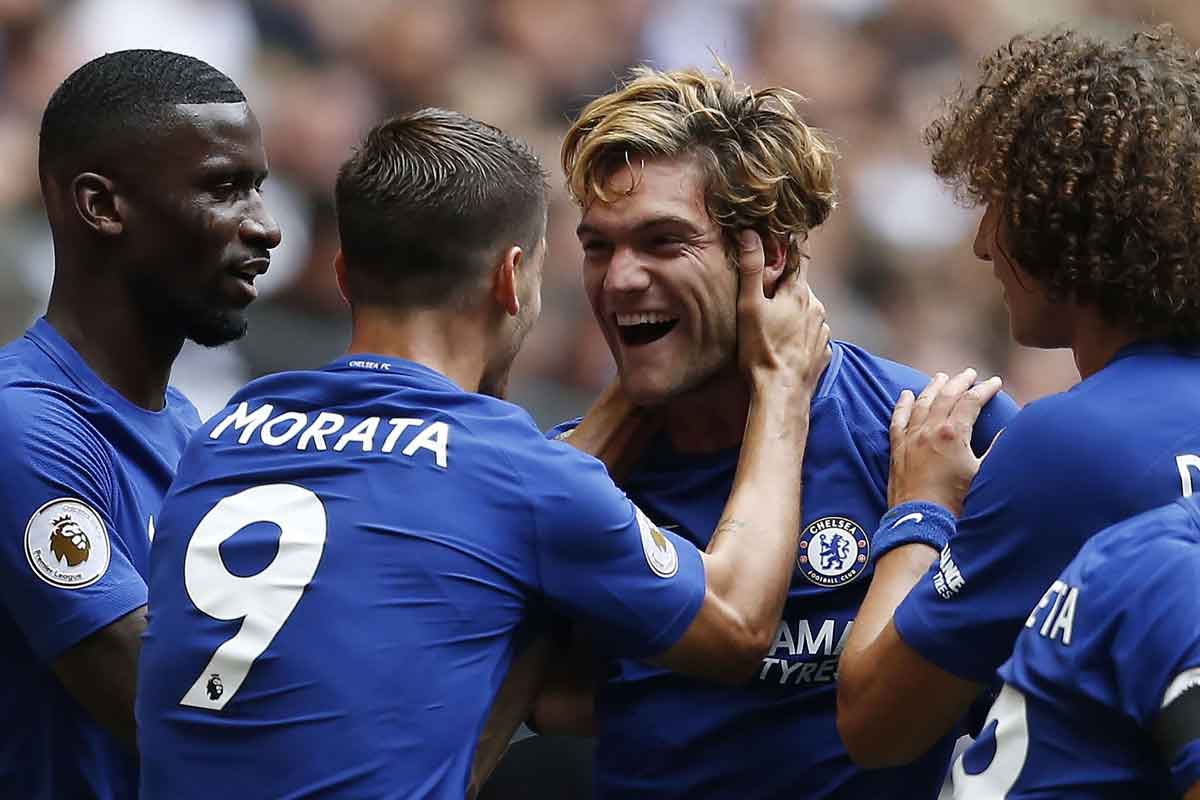 You associate Wembley with cup finals and it’s going to take a while to get used to seeing Tottenham play at the national stadium.

It was their first league match at White Hart Lane since 1899, and many Tottenham fans won’t have relished having to play a whole season at Wembley considering their poor record there.

Spurs wanted to banish the debate about that before kick off after only winning there twice in 10 matches (one of them was against Chelsea in the 2008 League Cup final though).

Last season, when Tottenham hosted their European fixtures at the stadium, they lost two, drew one and won one – against CSKA Moscow to extend their European campaign via the Europa League.

And they also played Chelsea at the national stadium once, losing 4-2.

But Spurs had a good record at home in the league, and a win would have seen them set a club record of 15 consecutive home league wins.

And although Tottenham lost, it was one of those typical Chelsea defensive games where they’re second best, but a defensive performance sees them through – think Barcelona away in their Champions League win.

Spurs had 68 per cent possession and completed 591 passes to just 282, restricting Chelsea to just two shots on target.

That should be enough for the home side to win the match, not be going away as losers.

Yet after going unbeaten at home last season, winning 17 league games at White Hart Lane, including their last 14 there, the talk won’t go away about a Wembley hoodoo until Spurs win at the national stadium, which makes the Burnley match massive.