Manchester City moved within one win of clinching the Premier League title by breezing past Tottenham Hotspur 3-1 at Wembley.

Pep Guardiola's side could even wrap the title up on Sunday if Manchester United drop points against West Bromwich Albion. The Red Devils will also have to beat Bournemouth at the Vitality Stadium on Wednesday if they are to delay the inevitable a little longer.

Gabriel Jesus opened the scoring for City after 22 minutes, racing through to lash beyond Hugo Lloris following a perfectly-weighted ball over the top from Vincent Kompany.

Three minutes later Ílkay Gündoğan doubled up from the spot after Lloris took out Raheem Sterling. Replays later showed the foul had been committed outside the penalty area.

Spurs got one back three minutes before the break when Christian Eriksen benefitted from a fortuitous deflection, but City completed the scoring after the break through Sterling.

Here are six things we learned from Wembley.

Full-backs in Guardiola teams are expected to come infield to help create overloads in midfield and Fabian Delph did just that at Wembley.

The England international, a central midfielder by trade, has been a hugely impressive stand-in at left-back this season and showed precisely why Guardiola is a fan against Spurs. 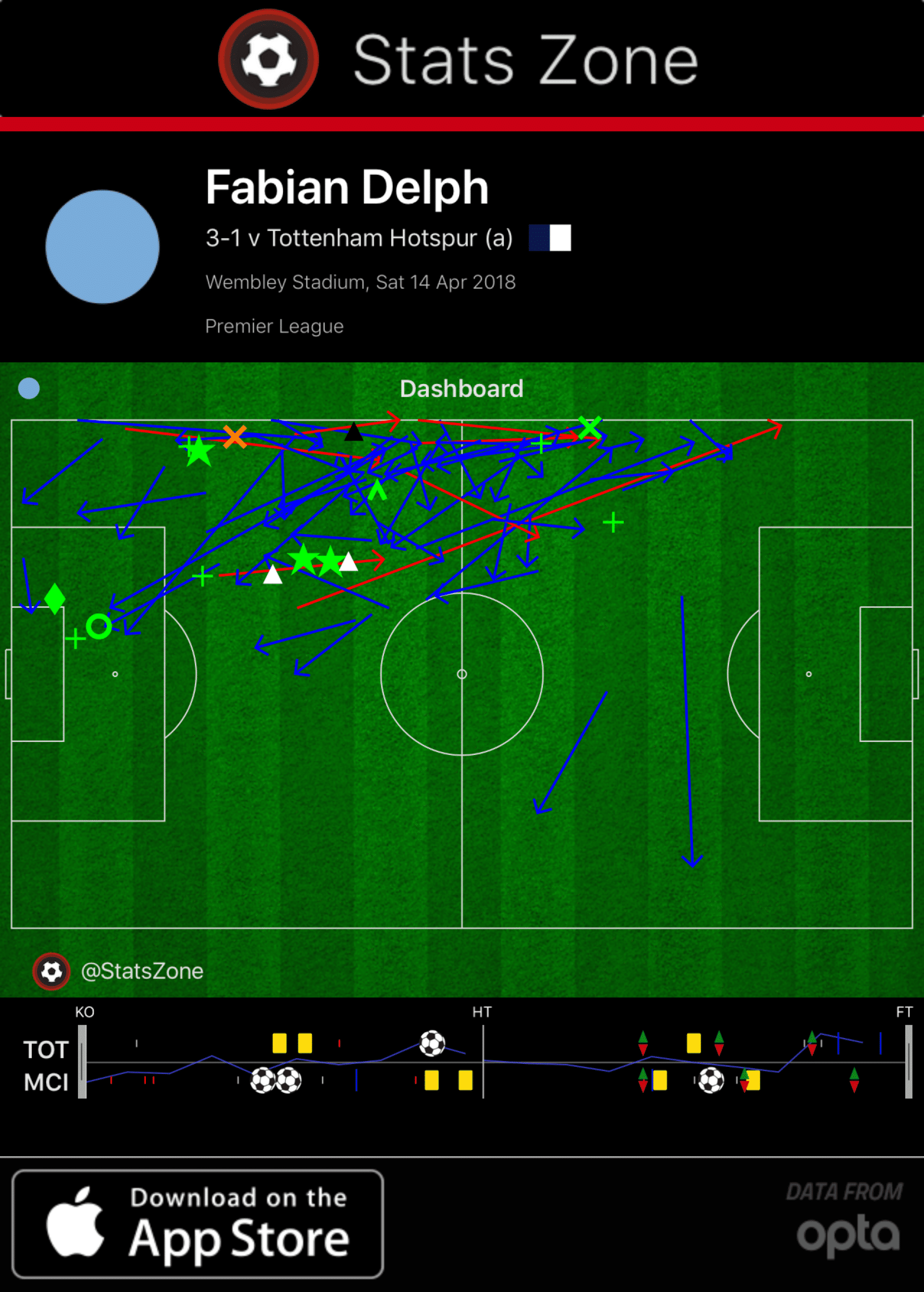 Whenever possible the former Leeds United and Aston Villa midfielder came inside and helped the visitors out-number their hosts in midfield.

With Delph, Gündoğan, David Silva and Kevin De Bruyne crowding them out, Spurs could not win the ball back and were continually running into dead ends. He finished the game having completed 45/51 passes and all three of the take-ons he attempted.

Sloppy Spurs made to pay

Manchester City have outclassed plenty of Premier League teams this season. But Spurs would not have expected to be made to look so ordinary on their own patch.

There was a stark contrast between the defensive numbers posted by the two teams at half time. With 11 tackles and as many interceptions, it was Spurs who had more joy winning the ball back than the champions-elect (three and four, respectively) as the graphic below demonstrates. 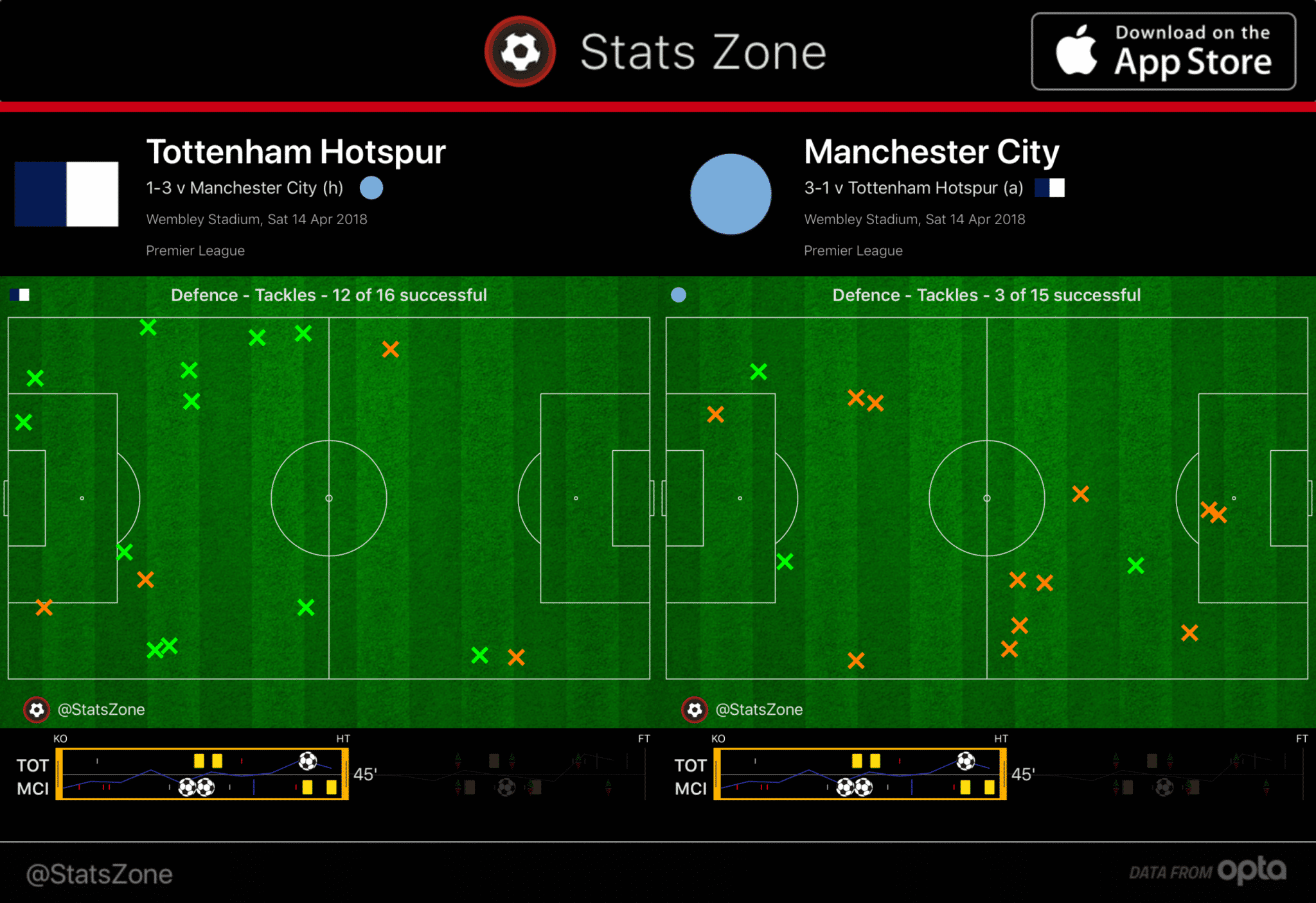 Yet when they won possession they invariably gave it straight back, completing just 153 of 205 attempted passes in the first half (74.6 per cent). City, on the other hand, succeeded with 211 of 258 (or 81.8 per cent) to dominate proceedings.

More often than not for Tottenham, things broke down in the final third where they completed just 38 of 60 first-half passes. City, by contrast, connected with 42 of 63 in their attacking third.

The hosts improved their ball retention after the restart but, by then, the damage was done and City shut up shop to make the points safe.

Day to forget for Davinson Sánchez…

The Colombian centre-half has rightly won plenty of plaudits this season. He has made good on the promise he showed while playing for Ajax in the run to last season's Europa League final.

Importantly he has ensured Paris Saint-Germain transfer target Toby Alderweireld has not been missed too badly with injury disrupting a large portion of the Belgian's season.

However, this is a game he will want to forget. Caught out trying to hold too high a line for City's opener, the Colombian was left in Jesus' dust as the Brazilian burst through to fire home.

He was then involved in the visitors' second, getting caught on the turn before Lloris tore off his line to flatten Sterling and concede a penalty. And Sánchez hardly covered himself in glory on the third either, allowing the initial shot to come in from which Sterling followed up.

This won't be news to Spurs fans, but it might just be to supporters of other Premier League clubs: Lloris is having a bad season.

For so long considered one of the Premier League's best, Lloris conceded a needless penalty three minutes after Tottenham had fallen behind, all but handing City three points after a nightmare start for the hosts.

The French No.1 was hard done by in as much as Jon Moss should not have awarded a penalty kick for a foul which was committed outside the penalty area. But he did not need to charge off his line and flatten Sterling either.

This was not an isolated mistake, though. Against Stoke City last weekend he was caught out coming off his line again, blasting the ball at Mame Biram Diouf to open the scoring. A week prior he completely missed Victor Moses‘ cross, allowing Álvaro Morata to nod home Chelsea's opener.

Last June he handed Sweden a stoppage-time win while playing for France, miscuing a clearance into the path of Ola Toivonen who fired home first time from his own half to clinch maximum points.

It cannot be allowed to continue and Pochettino has a big decision on his hands.

With Nicólas Otamendi not 100 per cent after the second leg of the Champions League quarter-finals, Vincent Kompany was restored to Guardiola's City line-up.

But it was Otamendi who was named among the substitutes for City meaning John Stones has not been in the matchday squad since the 5-1 win over Leicester City on February 10.

The signing of Aymeric Laporte for a club-record £57million has not helped the England international's claims for a starting berth. But there is more to it than that.

Guardiola has been an extremely vocal advocate of the former Everton defender. So why has he dropped out of contention altogether. Football Whispers‘ data suggests it is not for a lack of form.

With the World Cup around the corner it will be interesting to see whether Gareth Southgate's position on the 23-year-old changes due to his lack of minutes.

Sterling can still sharpen up

Much like City there is a sense of ‘What if?' with Sterling. The City No.7 has enjoyed the best season of his career in front of goal, scoring 22 times in all competitions, but he has also proven wasteful all too often.

In mitigation, he has overachieved vs. his xG score of 13.46 in the Premier League, netting 17 times, and his post-shot xG stands slightly lower at 12.31. That is a rarity as usually a player's post-shot xG score should be higher than their xG as the only efforts measured are those that are on target.

Against Spurs he had more shots than anyone else (5) but finished with just one goal to his name, tucking home from point-blank range after Lloris parried a shot straight into his path.

Pushed forward to play through the middle when Bernardo Silva replaced Jesus with 15 minutes remaining, the former Liverpool man got plenty of joy up against the hosts' high defensive line.

However, he wasted two excellent chances either side of his goal. The first when he rounded Lloris and steadied himself to fire into the empty net only for Eric Dier to block his effort. Having scored he then squandered another fine opportunity, motoring clear of Sánchez before Spurs' No.6 recovered to block.

Getting into the right positions he has clearly mastered. But his ability to put the ball in the back of the net leaves something to be desired.

No prizes for guessing what he will be working on between now and next season.