Possibly the best player to ever come to West Ham United. That’s how Javier Hernández was billed when he arrived in East London.

Yet, before today’s game, he had just four goals in 16 Premier League games, or four in 19 in all competitions. For a striker, that isn’t a great record.

After today he has four in 17 Premier League games, or 20 in all competitions. A little bit worse.

But let’s look again at what David Sullivan said when he splashed out to bring the Mexican to the club in the summer.

“I think, potentially, he is the best player that's ever come to the club,” Sullivan told Talksport.

“In recent years he is the best proven goalscorer we have signed since we have been at the club.

“He has done it in the Premier League with Manchester United.”

Hernández seems to become the latest striker to arrive in East London under Sullivan and co-owner David Gold for whom it hasn’t worked out.

What the Hammers would do for someone like the player they lined up against, Harry Kane, who’s up there with the best strikers in the world right now.

It was a stunning 2017 for Kane, scoring 56 goals in 52 games in the calendar year for Tottenham Hotspur and England.

The game against West Ham was his first of 2018, and he failed to start the new year where he left off in December.

In the first half, the two strikers did actually have a similar amount of touches, with Kane on 18 and Hernández on 17, but if you look at the heat map from WhoScored below (with the Tottenham man in orange and the West Ham man in blue), you’ll see that the England forward was much further forward and much more likely to score a goal, with touches in the box, while the Mexican was much closer to the halfway line.

As a player who is most deadly inside the box, with the vast majority of his goals coming from inside the area, to have Hernández playing so far away from it isn’t ideal.

It was because of that he didn’t even manage a shot on goal. Kane had three in the first half.

While West Ham’s goal from the game may be first of all to stop big teams like Spurs scoring, if they want to find the back of the net themselves, they’ll need to play to their forward’s strengths, and they certainly didn’t play to Hernández.

But perhaps David Moyes doesn’t fancy him. That wouldn’t be anything new.

The Mexican has has played more first-team football this season than he did in the whole of Moyes’ one incomplete campaign as manager of Manchester United.

In 2013/14 the striker started only six league games and two of 10 matches in the Champions League, complaining at the time that: “My club don’t take me much into account.”

“He’s a top goalscorer, a brilliant finisher,” said Moyes of the 29-year-old when he took over at the London Stadium.

“It was difficult for him at United because I had Robin van Persie, Wayne Rooney, Danny Welbeck, Shinji Kagawa, so there was lots of competition. But he’ll be treated the same here – if he’s playing well and scoring, no problems. If he’s not, it will be the same as the rest.”

Yet, the game at Wembley was his first start under Moyes and should his former boss stay at the London Stadium, it’s hard to see a proper role for the Mexican.

Kane, by contrast, was much more lively. It was by no means the 24-year-old’s best game in a Tottenham shirt, but he looked full of confidence and was a big threat throughout.

He caused problems early on and it was his shot that Winston Reid turned into his own net in the first half. Neither of them knew that the assistant referee had flagged, correctly, for offside.

With five minutes gone in the second half, he tried to chip Adrián from midway in the Hammers’ half.

The effort was wild, but showed the confidence he has at the moment. It’s doubtful that Hernández would even think of trying anything like that – it’s too far out, but he also seems short in self-belief right now.

On 58 minutes, he broke free and ran through on goal, but wasn’t fast enough to beat Davinson Sánchez in the Spurs backline. It was reminiscent of Álvaro Morata yesterday – he just never looked like scoring and it was no surprise to see him taken off with 25 minutes left, with just one touch in the opposition penalty area, as you can see below, courtesy of WhoScored. 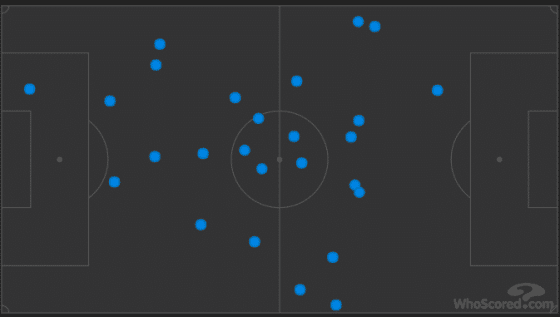 Kane, by contrast, did what you'd want of a forward against a defence like West Ham's which was on top form, getting in the box and getting shots away. 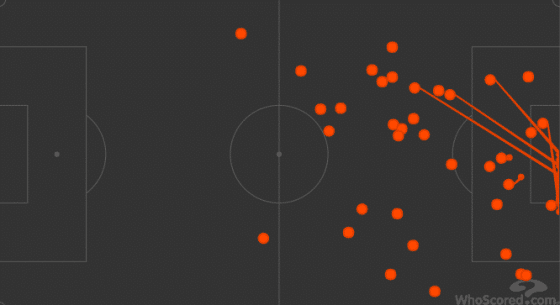 He failed to score, but this mini-drought (any game for him when he doesn't score is such a rare occasion nowadays it feels like a drought) won't last long.

And when he doesn't he can be bailed out by the likes of Son Heung-Min, who now has six goals in his last nine games after his spectacular equaliser.

For West Ham, it's unlikely Hernández can rely on Pedro Obiang to repeat feats like his wonderstrike when the strikers are misfiring. The look on Moyes' face when he gave the Hammers the lead temporarily suggested he doesn't even pull that off in training.

With Andy Carroll reportedly a Chelsea transfer target, West Ham may need another striking option, while Spurs surely won't with boss Mauricio Pochettino saying it would only take a transfer request to see Kane leave, and that won't happen any time soon.

He's the heart and soul of the Tottenham team – no-one had more than his seven shots. When they were pushing for a winner, the play was either going through him or aimed at him. It may not have been ultimately frustrating today, but it definitely will lead to Spurs success in the future.