Marco Silva’s arrival at Everton this summer was intended to improve upon the defensive and quite frankly dull football implement during Sam Allardyce’s reign at Goodison Park.

While the Toffees did reasonably well to finish eighth in the Premier League last term, there was a sense that more could be made of the squad and therefore a new coach arrived at the end of May.

Silva was, partly, brought into Everton to improve the manner in which they attacked opposing teams and ultimately score more goals – it’s why he pushed for the club to pay big money to bring Richarlison in from former club Watford.

Yet if the Portuguese coach is going to turn the Toffees into one of the Premier League’s most threatening sides he needs a consistent goalscorer. And, intriguingly, that area of the pitch is perhaps where they look a little light. That is, of course, unless we consider Cenk Tosun.

Tosun, who arrived in January from Besiktas, struck five times in 14 games and by the end of the 2017/18 campaign had an impressive average of 0.45 goals per 90 minutes for the club.

But is the Turkish striker good enough to lead the line for Everton, who clearly have grand ambitions of breaking up the status quo within the Premier League top seven, across a whole season?

He may have hit the ground running in January but is having to prove himself once again.

So far this term things haven’t clicked for the 27-year-old. Despite starting all four of Everton’s Premier League games to date as their lone striker, Tosun hasn’t managed to find the net. And when we compare this season’s stats to last season’s that’s not entirely surprising.

So, in black and white, in the opening four matches, Tosun's finishing has been poor. Yet while he may not be scoring, he is providing goals for his teammates in the form of assists.

Last season he didn’t manage a single assist in the Premier League, yet in the opening games he’s already chalked up two and is currently averaging 0.27 accurate through balls per 90, the eighth highest total among strikers. 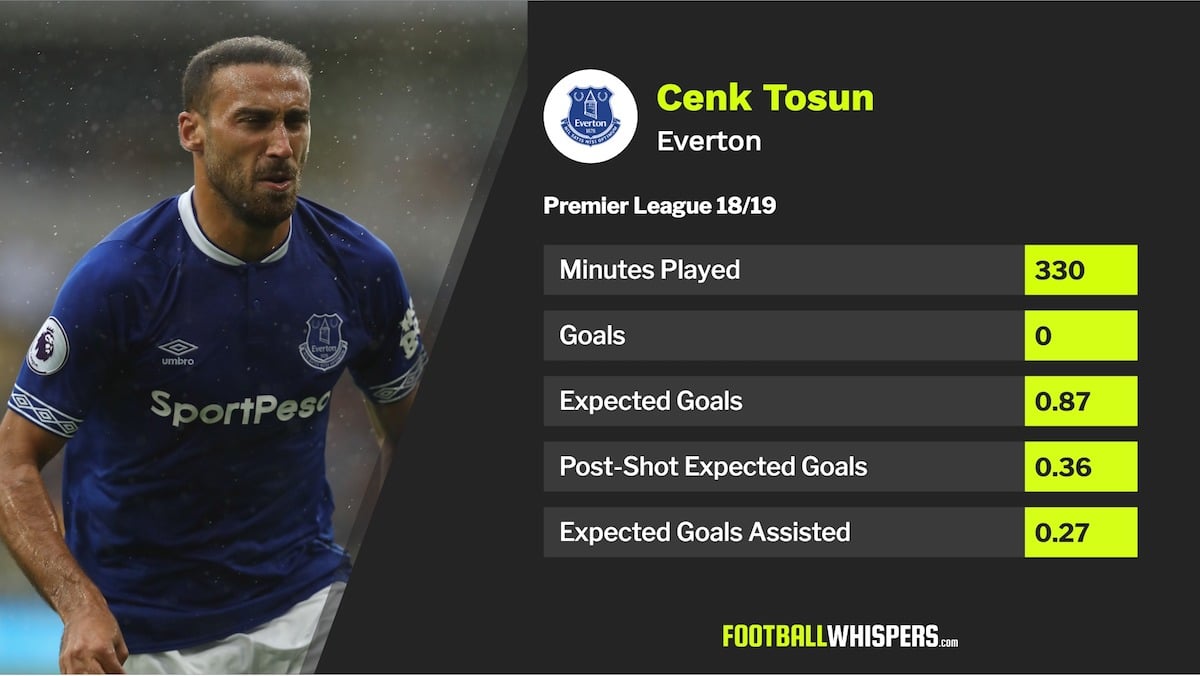 That could help explain why Calvert-Lewin has three goals in four appearances, Theo Walcott already has two and new signing Richarlison is currently averaging 0.47 expected goals per 90 minutes after picking up three goals 213 minutes of football for the Toffees this season.

The jury is probably still out on Tosun but while the striker may not be scoring goals at the moment he has shown previously he does have the capacity to find the net in the Premier League.

And, as Silva has undoubtedly noticed, the other attacking players around him seem to be more of a threat when the Turk is on the pitch.

He may not be a No.9 in the traditional, English football sense but Tosun is undoubtedly bringing something to Silva’s new-look, attacking side.