Torino and Sampdoria both sit in the bottom half of the Serie A table heading into Saturday night's clash. Jut 2pts and two positions separate the pair ahead of kick-off and we're expecting a very close and competitive 90-minutes.

Here are our predictions for Torino vs Sampdoria.

We're backing Sampdoria to win or draw this weekend as they are unbeaten in their last four league games against Torino. Last season, Sampdoria picked up a win at home and a draw away against Torino and the season before that, they picked up the domestic double over Saturday's hosts. Torino have dropped points in five of their last six matches in Serie A, while Sampdoria have secured 5pts from their last four outings.

We're predicting that Saturday's game will provide goals for both clubs as three of Torino's last six outings have seen both teams score and the same can be said for each of Sampdoria's last five fixtures. Neither team has managed to keep a single clean sheet in their last six attempts, which only adds further weight to our prediction for both teams to score on Saturday.

Torino's last home game produced over 2.5 goals as they beat Genoa 3-2, while each of Sampdoria's last six matches have witnessed at least three goals scored. We're expecting plenty of goalmouth action this weekend between two teams that struggle to keep clean sheets but have been finding the back of the net on a regular basis.

All you need to know ahead of Torino vs Sampdoria

Torino gave a good account of themselves away at AC Milan on Tuesday night but ended up losing the game 1-0 to a 14th-minute effort from Giroud. That result leaves Torino sitting 13th in the table on 11pts but another defeat could see the club slip right back down towards the relegation places, something they will be keen to keep well away from this season. Torino have shown signs of their ability to finish in a comfortable mid-table position but a lack of consistency could see them battling against the drop once again in 2022.

Sampdoria welcomed high-flying Atalanta to the Stadio Comunale Luigi Ferraris in Genova on Wednesday night, where despite taking an early lead through Caputo, the hosts lost the game 3-1. Atalanta's clash shone through in the end and the hosts were powerless to stop an in form Atalanta from collecting all 3pts. A win this weekend would take Sampdoria above Torino in the Serie A table, sot here is plenty of motivation for the 3pts.

Torino: Daniel Ansaldi, Rolando Mandragora, Simone Verdi, Marko Pjaca and Simone Edera are the injury concerns for the home side.

Sampdoria: Bartosz Bereszynski returns following a suspension, while Valerio Verre, Mikkel Damsgaard and Ronaldo Vieira could miss out through injury.

Torino vs Sampdoria: Your Questions 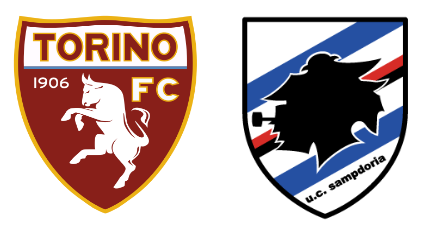