With 29 games played in the Premier League, Manchester City sit 16 points clear at the top of the table. The title race is certainly over, but the mad scramble below for a place in the top four rages on.

Manchester United, Liverpool, Tottenham Hotspur, Chelsea and, let's be generous, Arsenal are all fighting it out for a Champions League place.

But who is the most likely to make the cut and who should be expected to miss out come May?

The Gunners are closer to Burnley in seventh than Chelsea in fifth, and almost as close to the relegation zone (18 points) as they are second spot (17 points). Yet, surprisingly, Arsène Wenger's side's shot-based statistics are pretty good.

Arsenal are fourth by Football Whispers’ numbers when looking at the difference between their Expected Goals and their opponents’. And with this measure of team performance, it’s surprising they are quite so far off the pace.

So why the underperformance? Well, Arsenal have conceded a few more goals than their xG conceded value would lead us to expect, and this difference between xG conceded and actual goals conceded is the biggest of the supposed top six.

Those underlying numbers are not dominant – they have the fifth-best defence (1.18 xG per game) and fourth best attack (1.75 xG per game) in the league – but previously Arsenal’s offensive firepower could cover for defensive deficiencies they might have had.

That’s no longer the case and it leads to an all-round unimpressive look for the Gunners.

While Manchester United's position in the Premier League table looks far healthier than it did this time last season, what lies beneath will be a cause for concern.

While it would be reasonable to assume a team stewarded by José Mourinho would rely on a stubborn defence, this hasn’t been the case.

It's worth remembering, however, that this position – with underlying stats at the bottom of the top six clubs – is where United were last season. So in that respect they haven't improved.

The difference this year seems, according to the numbers at least, to be the much-heralded form of David de Gea.

United’s goals conceded this season is a whopping 15 below their xGA (Expected Goals Against). This is the largest defensive over-performance in the league, ahead of serial xG befuddlers Burnley (who have saved 12 goals from somewhere).

While the narrative of their season is one of improvement, these heroics are largely down to de Gea’s exceptional talents. 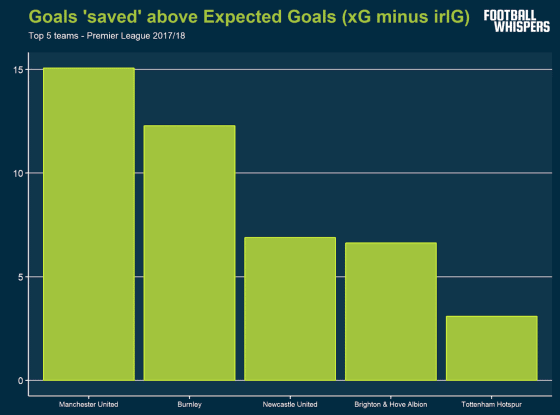 Last season’s title win was built on the foundation of an adamantine defence and the clinical form of striker Diego Costa.

The Blues' underlying attacking output was never truly great, but it didn’t end up mattering as they claimed the most wins en-route to lifting the Premier League trophy

This season the dynamic between attack and defence is the same but with two key differences; the former doesn’t have a red-hot striker to cover up its faults, and the latter is no longer as rock-solid.

Last term Chelsea scored with 41.7 per cent of their shots on target, the third highest of any team since the 2009/10 season. This season the rate is at an underwhelming 28.6 per cent, a couple of percentage points below the league average.

Chelsea also ranked second in xG conceded, just behind Manchester City, last season – if they’d spent the whole campaign playing 3-4-3 then they may have even been top.

They’re fourth this time around, quite a bit behind City in first – although, at their current pace, Antonio Conte's side will end up exceeding their xG conceded total from last season.

Interestingly, in terms of their underlying performances, the Blues season has been split in three – a period of genuine quality sandwiched between two spells of mediocrity. 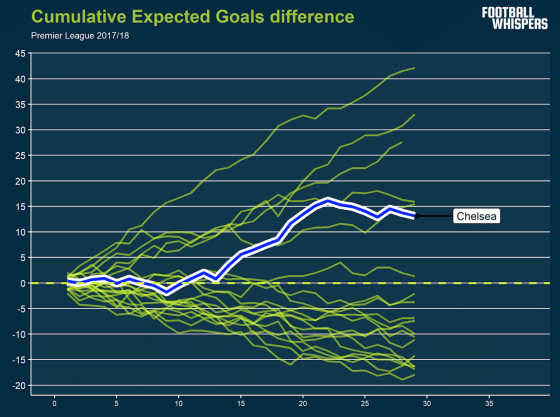 This is based on their pre-shot Expected Goals – the type of xG model that you’ll all be more or less familiar with. However, ‘post-shot’ Expected Goals models, which also take into account placement of the shot, exist.

These give all off-target or blocked shots a value of zero, but are used when you see something that looks at how many goals a goalkeeper has saved vs. a team’s xG (like the de Gea point earlier).

Chelsea’s post-shot xG numbers are interesting as they are one of the few teams in the league who have conceded a noticeably smaller post-shot xG than their pre-shot xG value.

Because post-shot xG is often associated with shot placement, it tends not to be applied to the team as a whole, but there is a theory that a difference between pre and post-shot xG values could be a sign of the amount of defensive pressure around those shots.

Footballers are all highly skilled and, isolated from any pressure, would be able to hit specific targets most of the time – so if the post-shot xG value that Chelsea are conceding is lower than the pre-shot xG, then the chances they’re conceding are actually under more defensive pressure than the average.

Burnley, typically, are the side who have the biggest effect reducing their Expected Goals conceded between the pre-and post-shot models.

Pre-shot Football Whispers’ numbers have them conceding 43.8 xG, but post-shot only 37.3, saving about six goals over the season. Chelsea aren’t far behind on four.

Above this toiling trio are a couple of teams who profile more positively. The first of which is Tottenham.

In attack, Spurs’ post-shot xG is around four goals smaller than their pre-shot xG over the course of the season, so it appears as though either their shot placement is bad or they’re taking shots under pressure. The drop off between the two is the fourth largest in the league this season.

However, this is a huge swing and a total change from last season where their post-shot xG was a whole 8.7 larger than their pre-shot, by far the largest positive difference of any team in that 2016/17 season.

This season at Wembley there's been a drastic change in actual performance vs. expected performance.

In their final campaign at White Hart Lane, Tottenham over-performed their (already impressive) pre-shot xG difference by a staggering 31 goals, the lion's share of that being in attack.

Cut to this season and they’re actually below expectation by three goals. A swing that is, again, driven by the attack, this time underperforming. Swings and roundabouts.

You might have noticed that Tottenham’s rivals for second best spot have barely been mentioned, and that’s because Liverpool are boring. There, we said it.

While Tottenham and Liverpool have been the best performers, Manchester United – for all their deficiencies – still have the most points banked, and that means a lot in the race for the top four. Riding those and whatever else they can squeeze out of the remaining games could likely see them hold onto a Champions League spot. 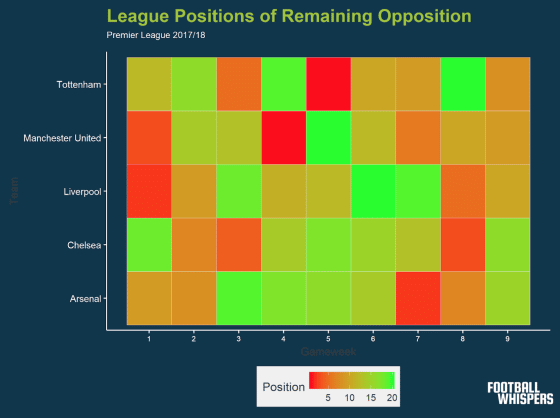 Below them there’s little to suggest Chelsea have the juice to catch up, but with only five points between them and Spurs, the window is still open. Their remaining matches at home to both Tottenham and Liverpool will be key.

Arsenal, on the other hand, seem cut adrift, with a Europa League run their best remaining chance at sneaking in.