Throughout the summer transfer window, many of Europe’s elite were linked with a big-money move for Bayer Leverkusen’s Kai Havertz. Barcelona and Real Madrid reportedly had an interest in the versatile forward, Liverpool were known to be long-term admirers while Chelsea and Manchester United were also keeping tabs on the Germany international. Bayern Munich also wanted to add him to their collection of homegrown stars.

With no release clause in his deal, the belief was Bayer would demand in excess of €100million for their prized asset, a fee which would make him the most expensive German in history.

João Félix’s move to Atlético Madrid only strengthened their cause. The Portuguese wonderkid had one season of first-team football under his belt before the €126million switch to the Wanda Metropolitano. Havertz, at the time, had just finished his third season, his most successful to date, as a starter for the German side.

However, a move failed to materialise and it was Julian Brandt, Havertz’s team-mate, who left the BayArena.

He kicked off the new season just as he’d finished the previous one; with a goal to his name. But in the 12 matches following that, Havertz has added just one to his total. A goal or assist every 361 minutes in the German top-flight is quite the drop-off from what he managed last term when he was involved in a goal every 145 minutes.

At this stage of the campaign last season, Havertz had four foals and three assists in the Bundesliga. It wasn’t until after the winter break in Germany that he really kicked on but he was still having an impact in terms of output.

The same can’t be said this time around and with Bayer struggling in general – they’ve lost three on the bounce – there may soon be discussions as to whether now is the time to part ways while they can recoup a hefty fee for the youngster. Especially with Havertz’s contract now entering a dangerous stage.

It comes to an end in 2022 and while that seems like an age away there’s only really 12 months before he can start to lay the groundwork for a potential move on a free transfer.

According to Bild, Manchester United and Manchester City have both held concrete talks with the Havertz over recent months. If either team makes a substantial offer, it’d be hard to see Bayer rejecting it.

And now could be the perfect time to land the 20-year-old at a reduced fee. His reduced output will not have gone unnoticed and this, coupled with the potential inconsistency tag, could be used to see that €130million price-tag take a bit of a hit.

But despite his apparent downturn in form, top tier clubs are right to still be interested in him. His 2018/19 season showed what he can do, and this while playing for a Bayer side in transition after replacing their manager midway through the campaign. And his underlying numbers over the past two seasons are eerily similar. 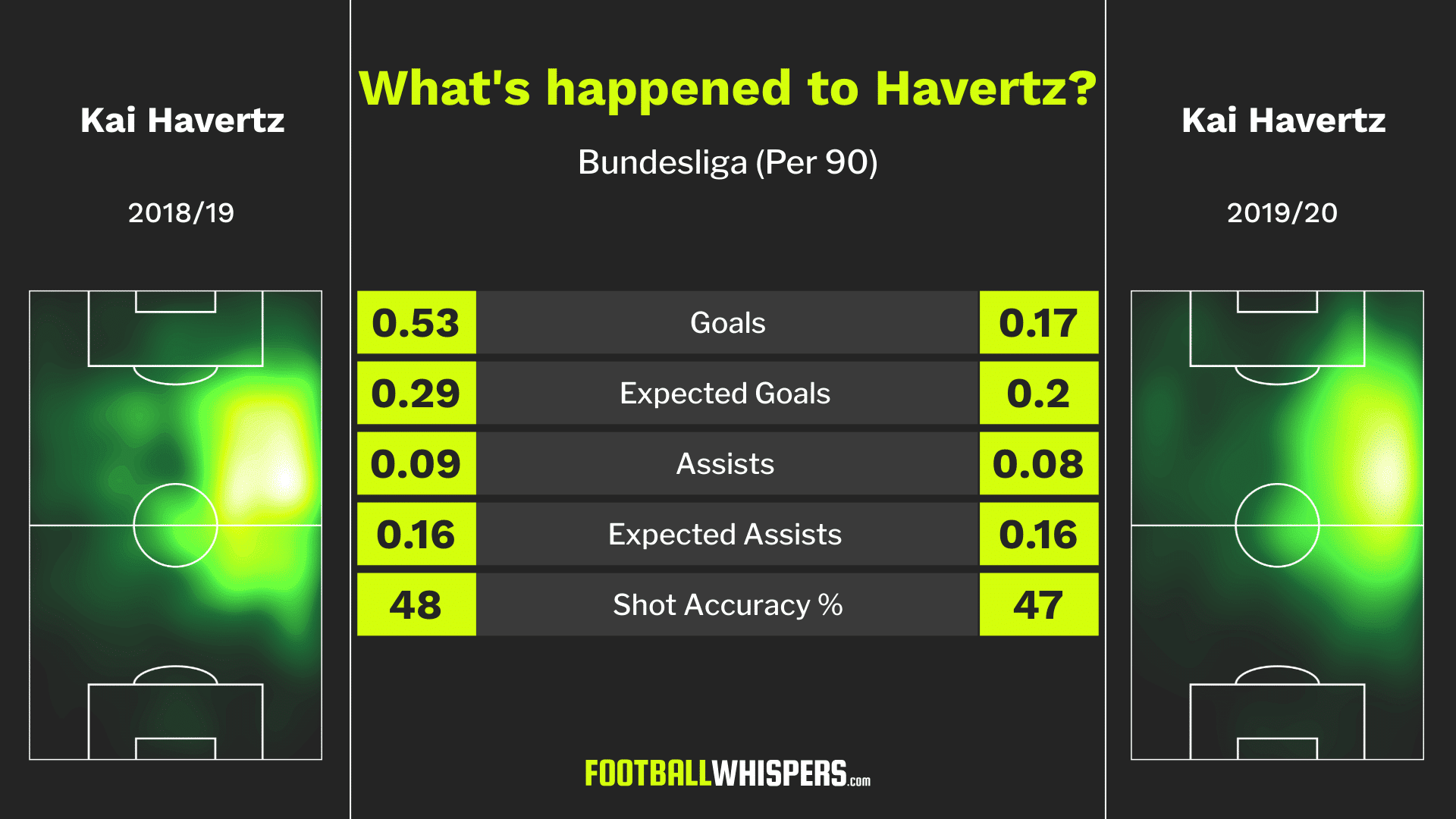 In terms of position on the pitch, not much has changed across the two campaigns, as evidenced by his heat maps. His goals per 90 averages have dramatically dropped but his expected goals average tells a different story. Whereas during the 2018/19 season he was overperforming, this time around he isn't. Assists and expected assists are almost identical, as is his shot accuracy.

Havertz is currently getting the Dele Alli treatment. After an extraordinary season in front of goal, expectations are outrageously high. If he's not scoring, he's judged to be underperforming. Yet if anything, the Bayer attacker is more dangerous this term.

Not only is his expected goal involvement 0.36 per 90, he's also assisting more shots this season, 2.41 up from 1.09, but he's also attempting and completing more dribbles. He's now completing 2.1 per 90 while last season he only attempted, on average, 2.4.

So when you break it down properly, he's still getting into dangerous areas but this year he's assisting more shots and completing more dribbles. Havertz is having more touches in the penalty area and attempting more passes in the final third on a per 90 basis.

The headline figures suggest he's underperforming but the underlying numbers show a player who is adapting his game while still remaining consistent. It's no wonder top teams are still looking to add him to their squads.