Tottenham Hotspur have been sparked into life towards the end of the transfer window after what has been a generally quiet summer. Their first major addition came in the form of Davinson Sánchez, a highly rated young centre-back from Ajax who joined for £42million.

Paolo Gazzaniga also arrived from Southampton, where he worked with current Spurs boss Mauricio Pochettino, to provide back up to Hugo Lloris in the goalkeeper position.

Tottenham continue to focus on the future with their work in the transfer market. They also remain financially prudent, though it would make sense for them to spend on further additions in order to strengthen key areas within the squad.

They have made an underwhelming start to their Premier League campaign, picking up just four out of a possible nine points and failing to win at home against Chelsea and Burnley. With a poor start domestically and a tough Champions League group featuring Real Madrid and Borussia Dortmund, quality depth is a necessity.

Here we take a look at the top five Tottenham transfer targets according to the Football Whispers Index — which scores the validity of transfer rumours out of five — to see who could help them in this respect. 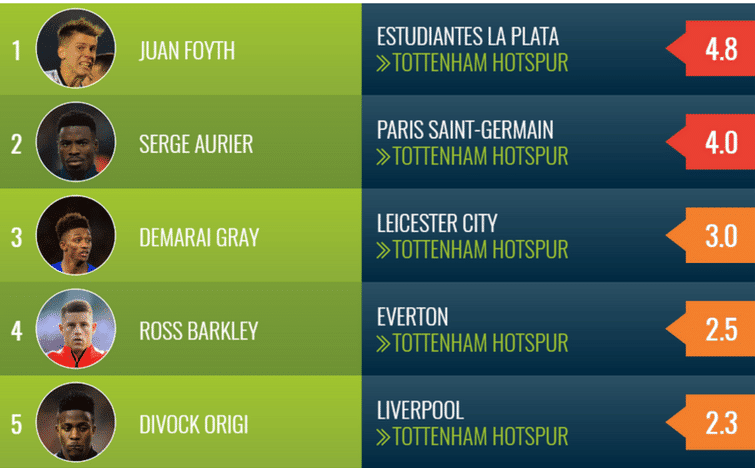 Tottenham have already added Sánchez to their ranks, but they may not have finished improving their defensive options as yet. It is reported that they have agreed a deal with Estudiantes for the signing of Foyth.

While the 19-year-old has been persistently linked to the club, any move was previously foiled by matters both financial and footballing. French giants Paris Saint-Germain entered the race for the player, while Estudiantes increased the youngster’s valuation.

Now, however, it appears Foyth could soon be a Tottenham player. He could take the place in Pochettino’s squad vacated by Kevin Wimmer, who has joined Stoke City in an £18million deal.

Spurs aren’t short of right-backs. Despite Kyle Walker’s departure, Kieran Trippier presents a solid, consistent outlet down the right while academy graduate Kyle Walker-Peters looks to be a fantastic prospect.

However, Pochettino evidently isn’t wholly satisfied by the situation, because Tottenham have been frequently linked with a move for Aurier in recent times.

The Ivorian, who is now Paris Saint-Germain’s third-choice right-back, had reportedly agreed personal terms and completed a medical. The two clubs were also believed to have agreed a deal. However, L’Equipe suggest that the move could fall through as the player may not get a work permit to allow him to move to the UK.

It has been reported that a former Tottenham player could help them sign a new attacker. Andros Townsend has been the subject of Leicester City transfer talk, and if he leaves Crystal Palace for the Foxes, Gray could become a more viable target for Spurs.

The young Englishman has not yet built on his genuine early promise. He impressed in flashes after joining the 2015/16 Premier League champions, but since then he has failed to nail down a starting berth.

Tottenham tend to play with at least three attacking midfielders in a 4-2-3-1 system, and Gray’s dribbling ability and pace could give them added creativity in this area.

With his contract up next year, Barkley is believed to be on his way out at Everton. Tottenham were previously seen as his next stop, but recent reports suggest otherwise.

A hamstring injury is set to keep the Englishman out for a prolonged period, and Spurs are concerned about the setback. They will therefore delay any move for the player.

Reigning champions Chelsea have also been linked with Barkley.

Origi has failed to establish himself at Liverpool despite hitting double figures in each of his two full seasons with the club. With Roberto Firmino and Daniel Sturridge ahead of him in the pecking order, there is no clear position for him in the starting line-up.

At 22 years of age, the Belgian may soon be on the move with the aim of more regular game time in mind. And Tottenham could be his destination, according to recent comments by his father.

Mike Origi stated that: “Divock has to leave Liverpool to get more playing time. Tottenham is a possibility, but there is also interest from France and Germany.”

Spurs could do with added options up front. Aside from Harry Kane, there is no natural centre-forward to lead the line in any of Pochettino’s preferred systems. While Son Heung-min can fill in there he is more of a winger, while Vincent Janssen has yet to show the desired quality.

Origi would give Tottenham a more direct, physical presence up front. His running in the channels could give them a more mobile option to stretch tired defences or fill in when appropriate.

He would be a good back-up to Kane, but there will undoubtedly be intense competition for his signature.