Tottenham Hotspur have yet to make a single signing in this summer’s transfer window, making them the only member of the Premier League’s top six to have made a net profit. However, as a recent friendly defeat to Manchester City suggested, reinforcements must be made.

Mauricio Pochettino has worked wonders with a young squad over the last three seasons. He has instilled a high level of organisation throughout the team and, with a clear style of play in place to go with constantly improving results, things are looking up for the club.

However, in order to challenge in an increasingly competitive Premier League, they should be looking to add quality to their squad to ensure it is fully prepared for the demands of domestic and continental action.

Here we analyse the top five Tottenham transfer rumours, using the Football Whispers Index, which rates each rumour’s probability out of five. 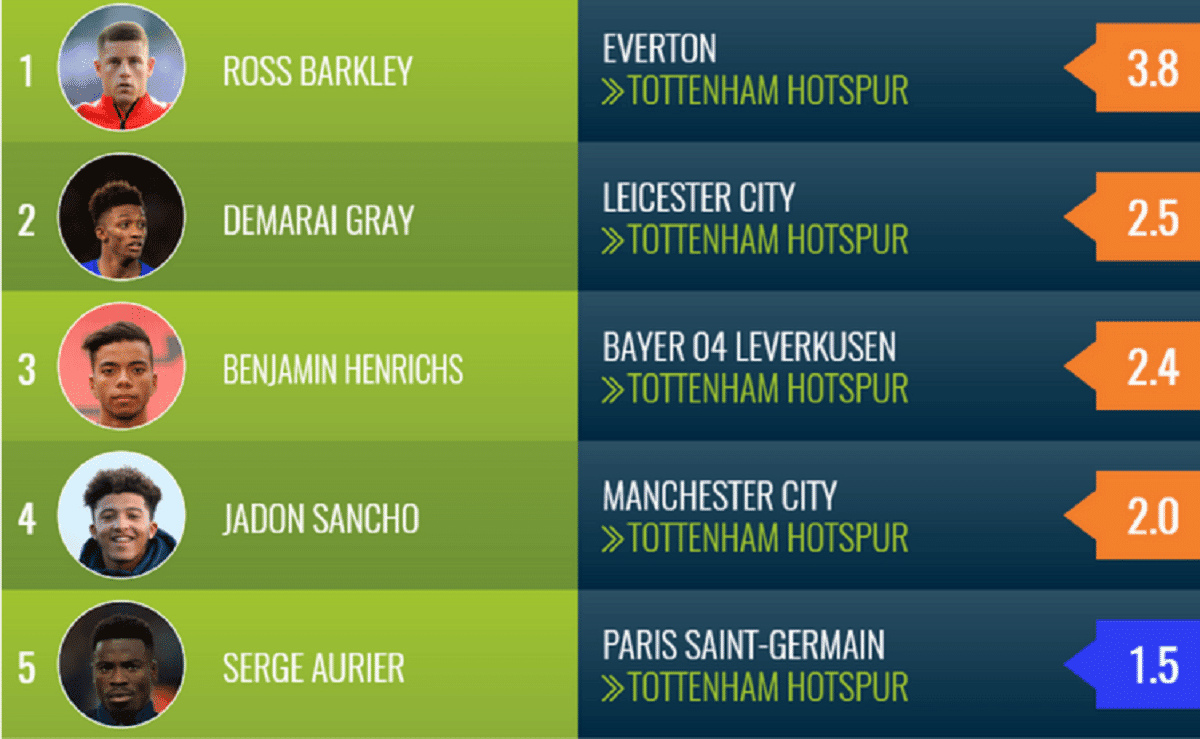 Rumours continue to circulate regarding a potential move for Ross Barkley to Tottenham, though the deal could be scuppered by the financial demands of both the player and his current club.

Everton are said to be seeking a transfer fee of around £40million for the attack-minded midfielder, a substantial sum for someone who is out of contract next summer. On top of that, the 23-year-old’s wage wishes of £120,000 per week are considered to be too much.

Barkley would suit Tottenham in a few ways. Tactically, his dynamism, vigour and dribbling ability would suit one of the inside forward roles in Pochettino’s 3-4-2-1 system. And in terms of profile, he is the right age and potential for the Premier League title hopefuls.

However, given Spurs’ commitment to a set financial structure and a sustainable, long-term project, they are unlikely to be malleable when it comes to transfer fees and wages.

Continuing the theme of young English players, Leicester City’s Demarai Gray has also been linked with a move to Tottenham in recent days.

The 21-year-old, who has 11 caps and four goals for England at under-21 level, is widely seen as one of the country’s most talented prospects and would fit Spurs’ strategy. However, he is tied to a long-term contract and has yet to play with the consistency necessary to suggest he would improve Pochettino’s current line-up.

Add that to the fact that Leicester are said to want £20million for the player and Tottenham may be put off moving for the versatile attacker this summer.

Following the departure of Kyle Walker to Manchester City it has become clear that Tottenham are in need of reinforcement in their full-back positions.

This area of the team is extremely important to Pochettino’s tactics and, while Kieran Trippier and Danny Rose are solid first choices, they lack back-up as it stands.

This explains the rumours linking Benjamin Henrichs with a move to the club.

The 20-year-old broke into the Bayer Leverkusen first team last season, impressing with his performances at right-back.

However, he has also shown the flexibility necessary to operate on the left flank when necessary.

With three caps for Germany already to his name, the youngster is seen as one of the most promising players in his home country and he could fill a crucial void at Tottenham.

It has been recently reported that his representatives are also keen to discuss a move.

Having been named the best player at this year’s European Under-17 Championship, Jadon Sancho appears set for a big move away from Manchester City. He has failed to turn up for training on multiple occasions, leading to speculation about his future.

The 17-year-old winger has been named as a Manchester United target, while others including Arsenal are on his list of admirers. Tottenham are also on said list.

Reportedly frustrated by the lack of opportunity at Manchester City, Sancho wouldn’t find such obstacles in his way at Spurs. But, in order to sign him, the London club will have to face off heavy competition.

Another right-back supposedly on Tottenham’s radar this summer is Paris Saint-Germain’s Aurier. The Ivorian appears to have slipped further down the pecking order in the French giants’ squad, with Dani Alves and Thomas Meunier ahead of him.

However, Spurs may need to move quickly if they are to have any chance of sealing a deal for the 24-year-old, with reports in France suggesting he has agreed a deal with Manchester United.