Tottenham Hotspur are the only top-five Premier League club not being linked with potential signings right, left and centre.

But that is just the way head coach Mauricio Pochettino likes it. After finishing runners-up to Chelsea last season, it will be a season of fine-tuning for the Argentine.

However, there are still names being linked with a move to the north Londoners this summer.

With that in mind, we've picked the five hottest Spurs transfer targets right now and analysed the likelihood of each going ahead. 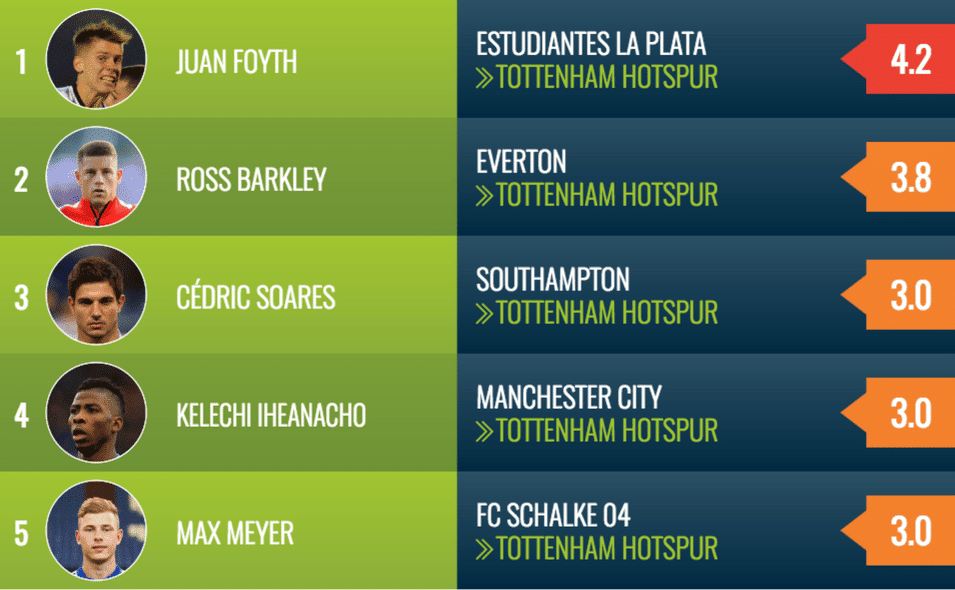 The Argentine centre-half has been heavily linked with a move to Tottenham for the past week now.

However, that might be about to change as French side Paris Saint-Germain have reportedly muscled in to sign the 19-year-old from under Spurs' noses. A €10.5million bid has been accepted and Foyth could sign for the Parisiens in the coming days.

On paper Foyth would be a good fit. Pochettino's preference is always to sign hungry, young players who can be moulded into the final product and Foyth is just that.

He played just seven times in the Argentine Primera Division last season and is a raw talent unlikely to force his way between the defensive axis of Toby Alderweireld and Jan Vertonghen just yet.

But the Belgian duo are so imperious that purchasing a centre-back who expects to play regularly would be foolish. Foyth is a signing very much with an eye on the future.

Another player who has been consistently linked with a switch to north London is Everton playmaker Barkley.

The England international is out of favour at Goodison Park after refusing to sign a new contract with the Toffees and a move away from Merseyside looks inevitable.

However, Barkley has reportedly set his wage demands at £150,000 per week. That is more than any other player at Spurs earns and, up against famously shrewd negotiator Daniel Levy, is a figure he is unlikely to receive.

But The Liverpool Echo claim that is not the case and the 23-year-old could still move to north London this summer.

What will play into Tottenham's hands is that Barkley now has less than 12 months remaining on his contract. Everton, even after bagging £75million for Romelu Lukaku, won't want to miss out on a windfall for the midfielder.

Kyle Walker's £45million move from Spurs to Manchester City means there is a vacancy at right-back for Tottenham.

Pochettino has made his faith in Kieran Trippier clear, firstly by allowing Walker to leave and then giving the England international a five-year deal.

However, cover for the former Burnley and Manchester City player is still required with youngster Kyle Walker-Peters the only other right-back at the club.

Soares would come relatively cheaply but Southampton have just seen their back-up right-back, Cuco Martina, leave St Mary's to re-unite with former Everton boss Ronald Koeman at Everton. That could be enough to kibosh the deal.

The Manchester City striker is clearly out of favour at the Etihad Stadium and looks certain to leave this summer.

Despite starting last season in good form the Nigerian, who scored the winner in the Manchester derby against fierce rivals Manchester United, fell down the pecking order behind Sergio Agüero and January addition Gabriel Jesus.

Iheanacho bagged four goals in just five Premier League starts last term but is unlikely to see more regular action this season as Pep Guardiola is struggling to find a way to include Agüero and Jesus in his side.

Leicester City are keen on the 20-year-old as well but Spurs desperately need a reliable alternative to Harry Kane. Vincent Janssen attempted to fulfil that role but without success last season, scoring just once from open play in the Premier League.

If Spurs can move the Netherlands international on, Iheanacho would be an upgrade and within the north Londoners' price range too.

German international Meyer is another player entering the final year of his contract and the 21-year-old has made it clear he won't be signing a new deal with the club.

New Schalke boss Domenico Tedesco is also undecided on whether he wants to keep the 5ft 8in playmaker at the Veltins-Arena for the forthcoming season. The 2016/17 campaign was disappointing for Meyer who managed just one goal from his 27 Bundesliga appearances.

Meyer would face stiff competition for a place in Pochettino's starting XI at Spurs given the quantity and quality of his direct rivals for a starting berth – including Christian Eriksen, Heung-min Son and Dele Alli.

On top of that, a deal could be dependent on getting club-record signing Moussa Sissoko off the books first as Spurs are overstocked in midfield.