With nine players already through the door at Rangers – and five leaving Ibrox – it has been a busy first transfer window for Pedro Caixinha.

But the under-fire Portuguese boss will have seen little to suggest he can put the chequebook away yet after the dismal Europa League qualifying exit to Progrès Niederkorn.

The next few weeks of the transfer window in Glasgow could be interesting as Rangers scramble to get ready for the new season.

With that in mind, we've picked the five hottest Rangers transfer targets right now and analysed the likelihood of each going ahead. 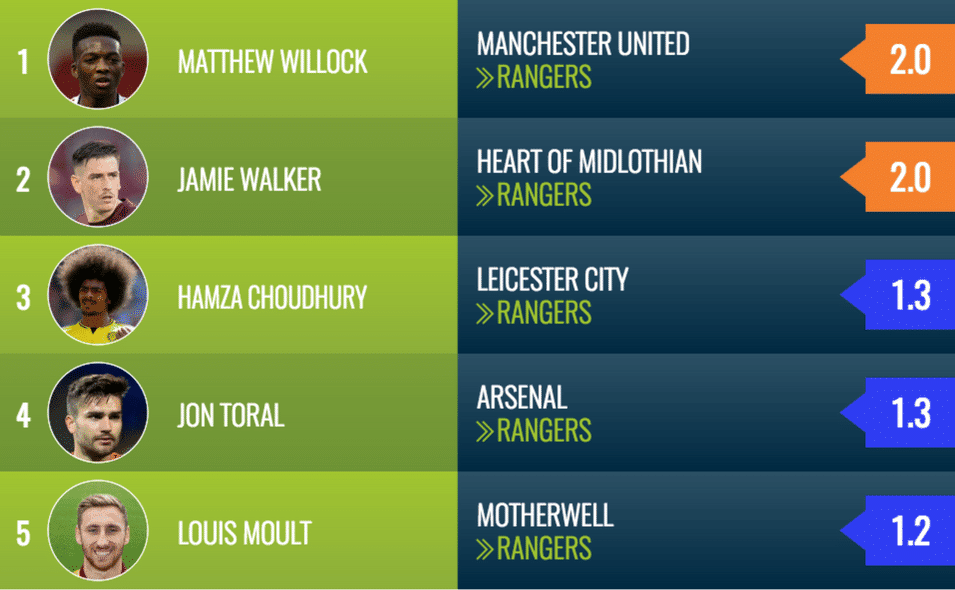 One of a clutch of young players at Willock never got on.

But the 20-year-old midfielder was still a big part of Warren Joyce's Under-21 side which finished sixth in the Premier League 2.

The next step for the midfielder, who bagged nine in 21 starts, is to prove his ability away from the glare of Old Trafford. And, according to The Sun, that might arrive in the form of a loan move to Ibrox.

Scotland has proven a good nurturing ground for young Premier League talent in the past and Rangers certainly enjoyed the impact Bournemouth midfielder Emerson Hyndman had last season.

The Hearts midfielder has been a Rangers transfer target for much of the summer and was watched by Caixinha in Friday's friendly against Newcastle United.

Rangers have seen four bids for the 24-year-old – who scored 12 times last season – turned down this summer but Walker is out of contract in 12 months.

Jambos boss Ian Cathro expects the former Scotland Under-21 international to leave the Edinburgh club eventually – but not yet.

“He is a big talent, he is someone who at a point will move on to a bigger league, a bigger club and have opportunities to work towards the top levels of the game. Of that there is no doubt,” Cathro said.

“And I'm very happy to be playing a part in how he progresses towards that. But, for now, people are just wasting their time.”

Another alternative in midfielder for Caixinha is Leicester City prospect Choudhury.

The 19-year-old Bangladesh-born midfielder spent last season on loan at Championship side Burton Albion and made 13 league appearances for the Brewers.

Choudhury had been key the previous campaign, helping Nigel Clough's side win promotion to the Championship with 13 appearances during their run-in.

Another loan spell beckons for the all-action midfielder who is unlikely to break into the Foxes' first team any time soon.

A loan spell north of the border, as reported by STV, could be the next step in his development. Hearts are also keen.

Already well known to Gers supporters, Toral spent the second half of last season loan at Ibrox from Arsenal after signing for previous boss Mark Warburton.

The Spaniard, 22, made nine appearances for the Gers after joining the man who took him to Brentford for the 2014/15 season.

But Toral struggled to show his best form during his time at Ibrox: “When I have a bad game it’s not easy to sleep, I am really critical of myself and I analyse the games and I know when I play well and play badly.

“So I just try to put the bad games behind me and focus on the next one and do better next time. Physically in the first few games I wasn’t fit enough, I wasn’t match fit.”

Toral's time at Arsenal looks set to come to an end this summer after loan spells at Birmingham City and Granada.

However, Derby County are also reportedly keen on the former Spain Under-17 international and have more financial clout with which to prise the attacking midfielder away from the Gunners.

The former Stoke City and Wrexham forward has proven himself to be be one of the most feared strikers in the Scottish Premiership by scoring 30 goals in the last two seasons.

According to The Sun, Rangers would have to offer out-of-favour forward Michael O'Halloran as part of any deal to bring Moult to Ibrox next season – as well as bettering Aberdeen's offer

Skipper and No.9 Kenny Miller continues to lead the line for the Light Blues, despite turning 38 this season and will not go on forever.

Meanwhile, new arrivals Aldredo Morelos and Eduardo Herrera will take time to settle into Scottish football after arriving from Finland and Mexico respectively.