After the early excitement caused by the club-record capture of Mo Salah from Roma, it has gone a little quiet for Liverpool in the transfer market.

The £10million addition of Andrew Robertson from Hull City was shrewd and much-needed; the Scot will give James Milner and Alberto Moreno competition for the left-back slot which has been missing for the last year.

Here we analyse the top five Liverpool transfer rumours, using the Football Whispers Index, which rates the probability of each rumour out of five. 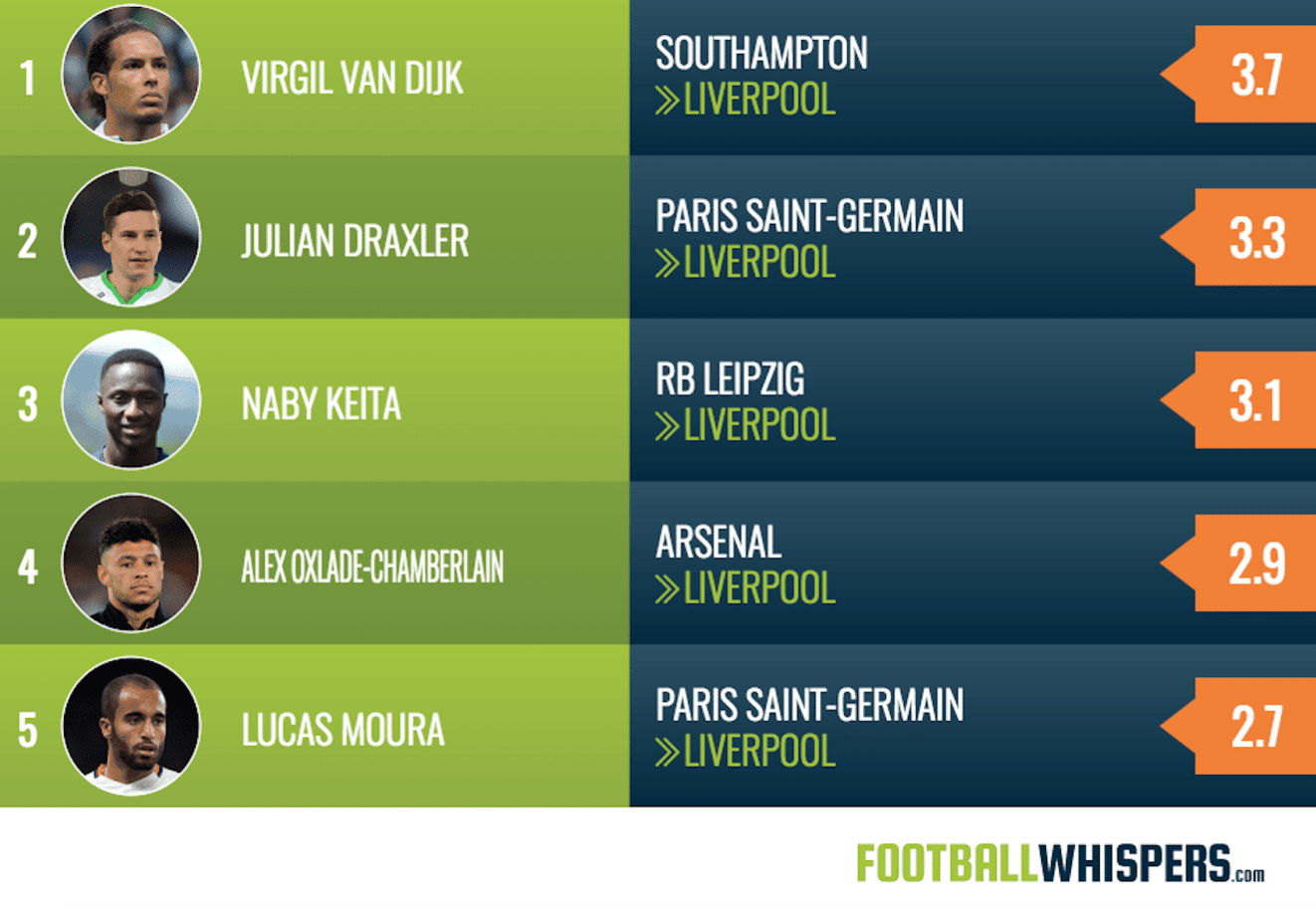 The centre-back, one of the stars for the Saints over the last 18 months, had looked set to become the latest Southampton player to head north to Liverpool.

However, the South Coast club threatened to report Liverpool to the Football Association over an illegal approach for the Dutchman earlier in the summer. The Merseysiders immediately apologised and the the deal looked dead.

Or is it all one giant smokescreen? Much like Keïta, the player has his heart set on Liverpool. So much so that talk of interest from Manchester City and Chelsea has dwindled.

Van Dijk is doing his bit to force through the move and was left behind when the Saints headed for France as part of their pre-season preparations last month. Liverpool will have to pay a premium if they go back in for the former Celtic man, but he’s worth it.

Draxler is a long-term target for those at Anfield if you believe reports. The Reds missed out to PSG in January when the German international left VfL Wolfburg.

The Ligue 1 side paid in the region of £40million to secure his services but, according to L’Equipe, Draxler is now available for just £32million.

If PSG need money in the Neymar era, the former Schalke player is a very sellable asset.

Although right-footed, he can play on the left and all across the attack, and loves cutting inside onto his strong foot. Physically impressive, he could play a number of roles in a Jürgen Klopp system. He can operate in one of the forward positions or play more of a box-to-box role.

Liverpool may have a strong starting XI but beyond that their options are limited. They've been unable to call upon Philippe Coutinho and Adam Lallana over recent weeks and in their absence they've looked predictable.

Adding yet another versatile midfielder to their ranks is a must if they're to compete on all fronts.

Liverpool’s interest in the Leipzig midfielder has been one of football’s worst-kept secrets. One of the stars of last season as RB finished Bundesliga runners-up to Bayern Munich, Keïta is believed to be keen on a switch to Anfield.

The Reds, for their part, are prepared to pay a club-record fee for the Guinean midfielder – that much is clear.

But RB have already turned down two offers – despite reports claiming a £66million fee had, briefly, been agreed.

What might help push the move through is the breakdown in relationship between club and player.

Director of football Ralf Rangnick has questioned Keïta’s application in training and the player was involved in a brief clash with Diego Demme at training.

Football Whispers have been told Rangnick is determined to block Keïta’s move to Anfield as he holds a grudge against Arena 11, the player’s agent, who also represent Sadio Mané – who played for Red Bull's other club Salzburg.

The 59-year-old was not happy about the way they conducted themselves during the winger’s sale to Southampton and it has been claimed it may have had an impact on blocking Keïta’s exit.

Arsenal manager Arsène Wenger is said to want to keep Oxlade-Chamberlain at the Emirates and the club are reportedly preparing to offer the versatile midfielder a new contract.

However, the former Southampton man is believed to want a more central role, something Arsenal aren't prepared to offer. Chelsea are interested but, again, he wouldn't be assured a centre-midfield position.

However, Liverpool are said to want to add the multi-functional midfielder to their ranks and are willing to use him in a box-to-box role.

Moura could be another victim of Neymar's move to Paris Saint-Germain.

The Brazilian winger wasn't a first-choice player for Unai Emery before the club forked out a world record £198million to bring the Barcelona man to Paris. He's definitely not going to be one now he's there.

ESPN FC reported on Wednesday that a number of players from the Parisians club will be on the move this window and specifically picked out Liverpool’s interest in the 24-year-old.

He's been perpetually linked with a move to the Premier League for a number of seasons now and he's been rumoured to be on the radar of the Merseyside club for the past three transfer windows now.

It would be an odd move for Liverpool to spend £40million on a player who isn't as versatile as others mentioned on this list. He's not going to start ahead of Mané or Mohamed Salah. But it's a squad game and if either of those two are out for a sustained period Liverpool look a little predictable.