Manchester United have secured the £75million signing of Romelu Lukaku from Everton, with the powerful Belgian striker coming in to fill the void left by Zlatan Ibrahimović's departure from the club.

But the Red Devils' spending is set to continue. Manager José Mourinho is said to be keen to add a defensive midfielder and a winger to his squad ahead of the 2017/18 campaign, and there have been a swathe of players linked with Old Trafford moves recently.

The Football Whispers Index takes all of the latest transfer rumours and assigns them a score out of five; the higher the score, the more likely the deal is to happen.

Here, we assess the top five Manchester United transfer rumours according to our Index. 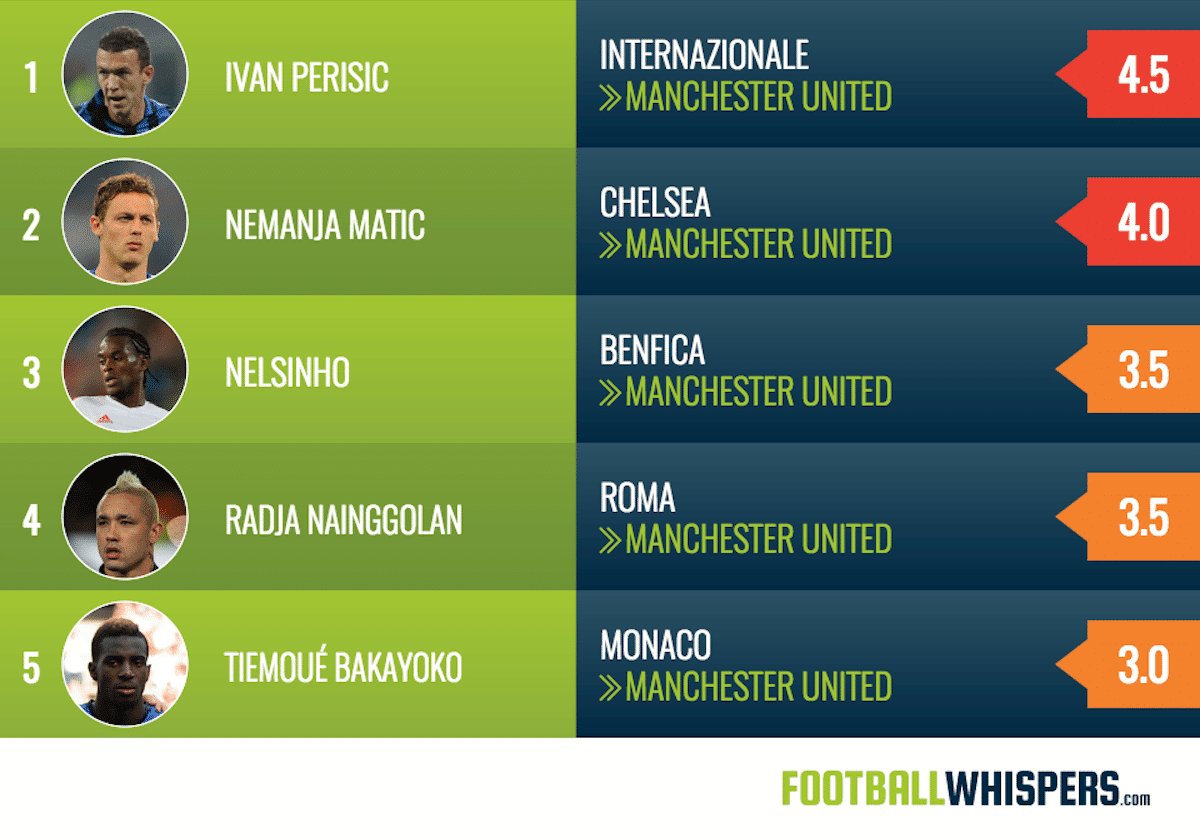 It's a move that has been on the cards for several weeks now and United finally appear to be closing in on Perišić.

Mournho is thought to want an orthodox winger this summer, one who is hard-working and productive – Perišić certainly fits that mould. The Croatian international was consistent and effective in Serie A last season, returning 11 goals and eight assists despite the Nerazzurri enduring a turbulent campaign.

But the fee Inter are demanding for the 28-year-old has been a sticking point. The San Siro giants, having met their Financial Fair Play obligations, are under no pressure to sell and would rather retain the player. They have reportedly told United to stump up €55million otherwise Perišić will remain in Milan.

With their initial bids rebuffed, The Independent reported this week that the Red Devils are now close to meeting Inter's valuation and are confident that a deal will be agreed this week.

For the player's part, Perišić is believed to be extremely keen on a switch to Old Trafford, with personal terms already agreed in principle. It seems a matter of “when” rather than “if” with this one.

Of all the targets Mourinho has identified for the defensive midfield role, Chelsea‘s Nemanja Matić is thought to be top of the list.

The Manchester Evening News reported last month that United had already agreed terms with the Serbian midfielder and that Chelsea would be willing to allow the 28-year-old to leave once they had completed a deal for Monaco's Tiemoué Bakayoko.

However, the Blues pursuit of the Frenchman has stalled – and there are even rumours of United attempting to hijack their move for the former Rennes player.

What's more, the way United trumped Chelsea in the race to sign Lukaku is thought to have soured relations between the clubs. If the 20-time champions are indeed now attempting to rival the Blues' interest in Bakayoko, that issue will only be further exacerbated. 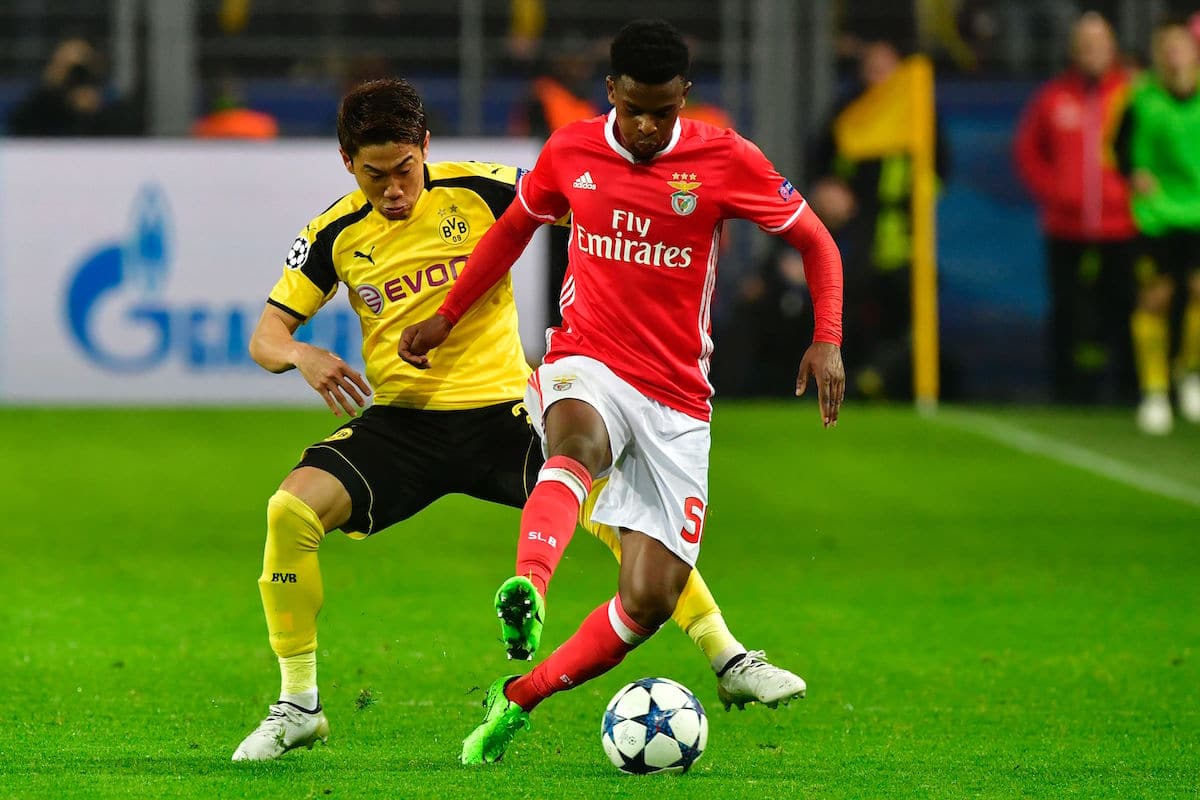 United were initially linked with a move for Benfica right-back Semedo in the January transfer window last term, but no such deal materialised as Mourinho elected to keep his powder dry during the mid-season market, putting his faith in Antonio Valencia.

The Portuguese press were insistent at the time that the Old Trafford club were strongly pursuing Semedo along with then-team-mate Victor Lindelöf. United have, of course, now completed the signing of the Swedish centre-back, forking out around £31million for the 22-year-old.

O Jogo in Portugal and Mundo Deportivo in Spain both reported last month that United were set to lodge a €35million bid for the 23-year-old Portuguese international – who is also a Barcelona transfer target.

However, with Benfica holding out for as much as €45million, Mourinho has cooled his pursuit of the player, according to Correio da Manha, who claim the Europa League champions will instead revisit the situation in January.

Roma star Nainggolan is somewhat of an incongruous inclusion on Mourinho's supposed summer wish list due to the fact that he does not fit the billing of the type of defensive midfielder the Portuguese boss is said covet.

The 29-year-old Belgian is a dynamic box-to-box powerhouse, contributing equally to the attacking, defensive and transitional phases of play.

However, Nainggolan, though perhaps not exactly what United need right now, is a superb player who would improve almost any team in the world; if they have been given any indication that the Giallorossi midfielder might be available, the Red Devils would be wise to make their move.

Nainggolan has always seemed supremely happy in Rome ever since joining the Stadio Olympic club. Having lived in Italy since he was part of Piacenza's academy as a teenager, he now has a young family and an Italian wife – there is little need for him to uproot.

Indeed, a Chelsea transfer target a year ago, Nainggolan shunned the Blues' advances in favour of remaining with Roma.

“I built my home in Rome, where the sun always shines,” he told Belgian Magazine Nina last summer. “Giving all this up would be difficult. Life isn’t just football. Can you see me in England, where it rains all the time?”

Now, though, the Antwerp-born player, who enjoyed the most productive season of his career in 2016/17, scoring 11 goals and registering five assists in Serie A, might have cause to consider his future.

Nainggolan has been expected to renew his contract with Roma for some months now but no deal has yet been signed. With the riches on offer in the Premier League, at 29, he may wish to make his next deal as lucrative as possible.

A cryptic Instagram message recently caused a stir of speculation over whether Nainggolan is set to leave Roma, but Monchi, the clubs new sporting director, has insisted the player is not for sale. 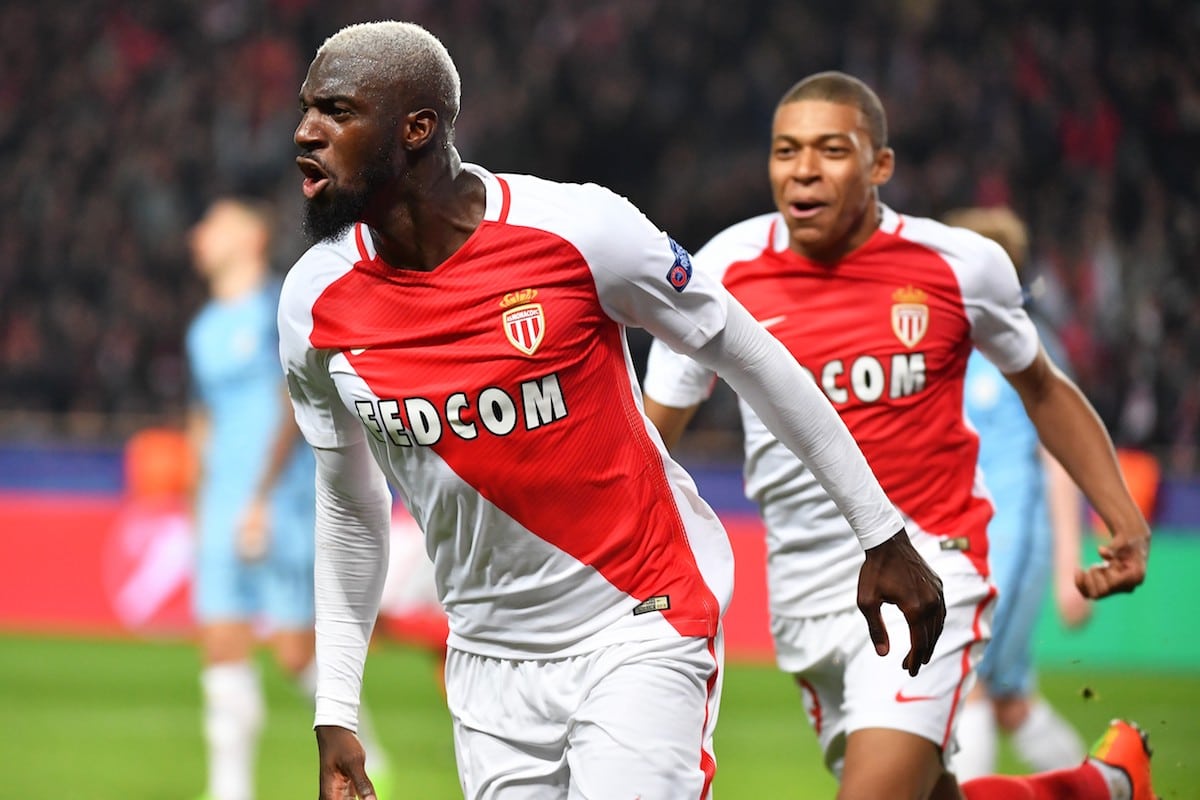 After gazumping one Chelsea transfer move this summer by swooping to sign Lukaku, United are reportedly plotting a second Stamford Bridge hijack.

French midfielder Bakayoko has been on the verge of completing a move to the Premier League champions for several weeks now, with the player recently travelling to London to hash out the finer details of the deal.

However, the transfer has stalled, with Chelsea reportedly put off by a minor knee injury that is said to be troubling the Monaco midfielder.

The Blues remain firm favourites to secure Bakayoko's signature, but the Express and the Daily Star both claim United are ready to rival Chelsea's move for the player, with the former even claiming that the Red Devils have submitted a bid in excess of £40million for the 22-year-old France international.

Some feel that the reports are stemming from the Stamford Bridge club, who, it is theorised, are aiming to make it appear as though they have outfought United for the midfielder, saving some face after the embarrassing Lukaku debacle.

But the claims made in the press about United's firm offer are bold and those reporting are clearly confident in their information.