José Mourinho has made no secret of his frustration at Manchester United's transfer market inactivity in recent weeks.

The Red Devils have already secured Romelu Lukaku in a £75million move from Everton and spent £31million to secure the arrival of centre-back Victor Lindelöf from Benfica.

But Mourinho wants two more: a defensive midfielder and an attacker who can play out wide, as he outlined when speaking to the press on United's pre-season tour of the United States.

The Football Whispers Index takes every transfer rumour and assigns a score out of five based on likelihood and validity.

Here we asses the top five Manchester Unted transfer rumours to see who could yet be on their way to Old Trafford. 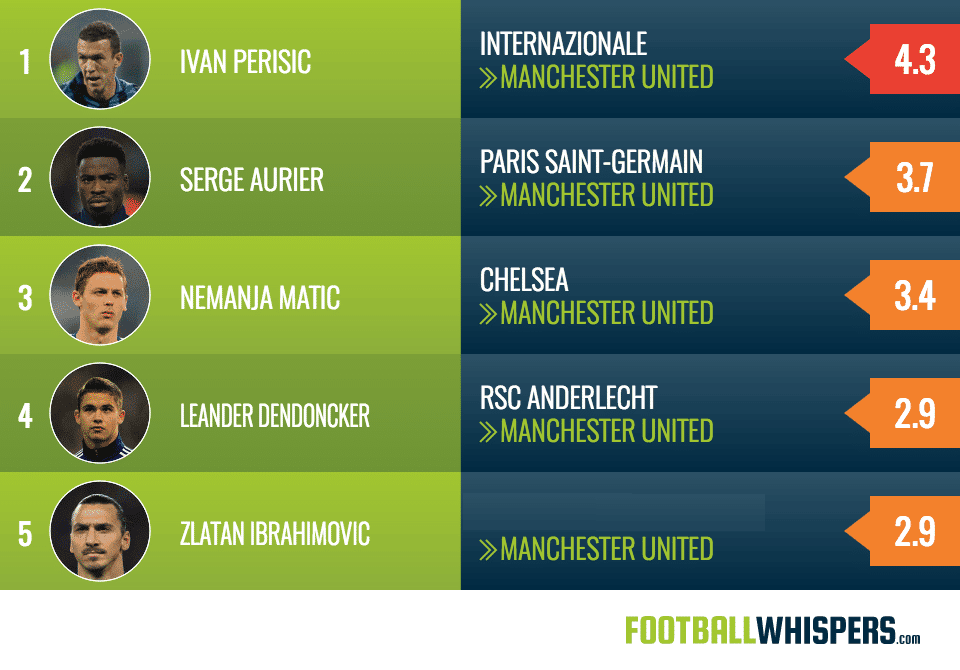 After looking like a formality for several weeks, United’s move for Perišić appears to have reached an impasse.

All eyes were on the Croatian earlier this month when he was due to fly out to China for Inter Milan’s pre-season tour. Speculation was rife over whether or not the Premier League club would lodge an acceptable bid for the 28-year-old before he travelled east.

However, no suitable offer arrived and Perišić got on the plane.

Inter are said to value the player, who scored 11 goals and registered eight assists in Serie A last season, at €55million, while United have fallen short of that figure with their bids so far.

Italian transfer guru Gianluca Di Marzio reported recently that the San Siro giants have now shifted the goalposts in negotiations, insisting that a season-long loan of 21-year-old French forward Anthony Martial must be included in any deal.

United are unlikely to bow to that demand, and CalcioMercato claims the Red Devils have contacted the agent of RB Leipzig's Emil Forsberg as they switch their  attention away from Perišić.

The Bundesliga club have maintained all summer the neither Forsberg nor Liverpool transfer target Naby Keïta will be sold.

But the fact that the Swedish playmaker shares an agent with United new boy Victor Lindelöf gives credence to the reports that the Premier League side have sounded out the 25-year-old.

Who is Serge Aurier? | Paris Saint-Germain | FWTV by FootballWhispers

According to The Independent, United, while prioritising a defensive midfielder and a winger, are also in the hunt for a right-back, with PSG’s Aurier moving to the top of their wish list.

Mourinho reportedly fancies Monaco’s Fabinho for the role, despite the Brazilian having featured in central midfield all of last season, but the Monegasque club are proving tough negotiators.

Hence the switch in focus to Aurier, who is out of favour in Paris following Dani Alves’ arrival and could be available for around £25million.

Furthermore, with the PSG targeting Neymar in a £196million deal, they are likely to be open to the sale of several of their lower-profile players to help fund their move for the Barcelona superstar.

The 24-year-old Ivory Coast international is a suburb full-back – athletic, powerful and technically impressive, he as every tool to succeed in the Premier League.

But there have been major question marks over his attitude in the past, with an outburst against former PSG boss Laurent Blanc and then (and possibly future) team-mate Zlatan Ibrahimović getting him into hot water and causing dressing room unrest.

He was also unable to play in England in a Champions League fixture against Manchester City last season having been denied a visa due to an assault conviction.

It is not clear whether this would affect his ability to obtain a work permit, but it is probably fair to assume that United have received assurances about this if they are indeed serious in their attempts to sign the defender.

Juventus and City have also been named as admirers of Aurier, but the Italian champions are out of the race as they have no non-EU places free in their squad, while City have secured the signing of right-back Danilo from Real Madrid and Kyle Walker from Tottenham.

That would leave United in the clear if they wish to pursue a move for Aurier. Antonio Valencia starred as a right-sided full-back last term, but he turns 32 before the start of the new season. Acquiring younger, long-term option would make sense. 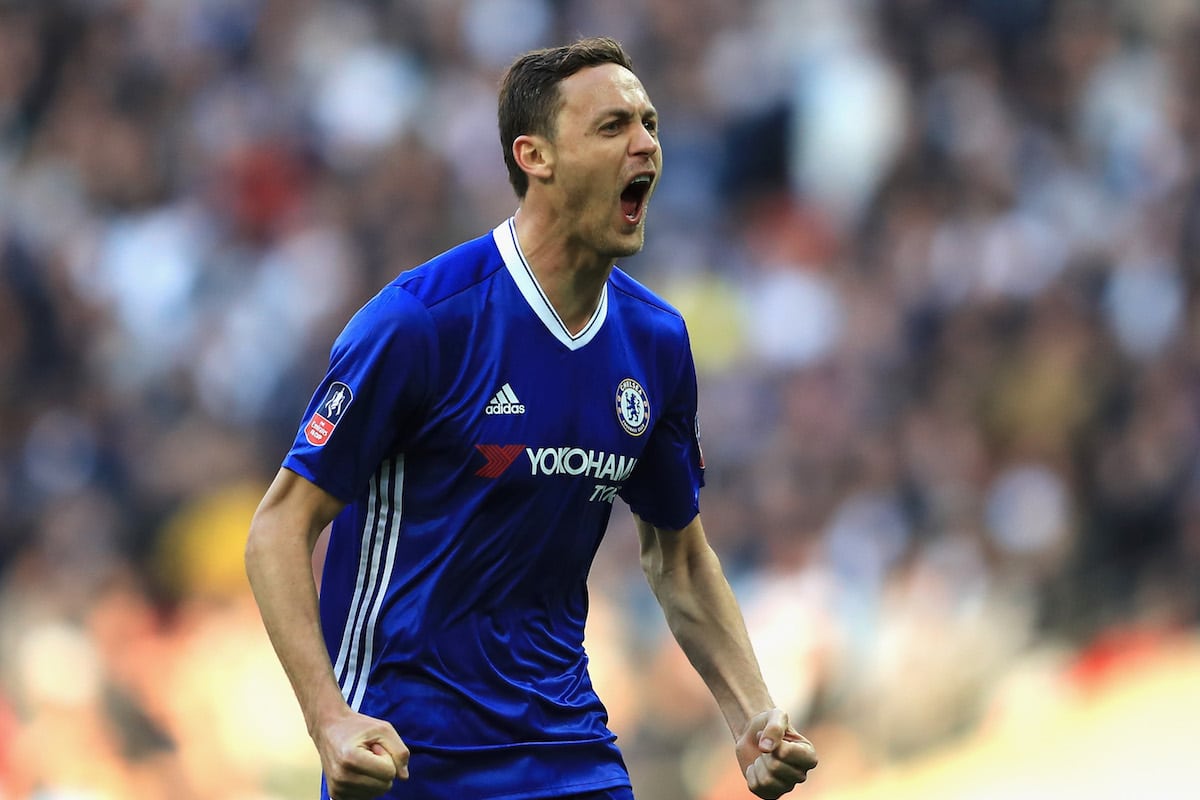 It's been widely reported for quite some time that Eric Dier of Tottenham Hotspur and Chelsea's Nemanja Matić are Mourinho's primary targets for the defensive midfield position.

Having been rebuffed in their efforts to land the versatile England international, United have trained their focus on 28-year-old Matić, with whom Mourinho won the Premier League in the 2014/15 season.

However, Chelsea, peeved at being pipped by the Red Devils to the signing of Lukaku this summer, are reluctant to countenance the Serbian's sale to the Manchester club, and were instead hoping Juventus would make a move for the player.

But the Italian champions are unlikely to come anywhere near meeting the Blues' lofty £50million valuation, which, according to The Independent, could see Matić becoming a United player after all. Expect a few more twists and turns before this one is resolved. 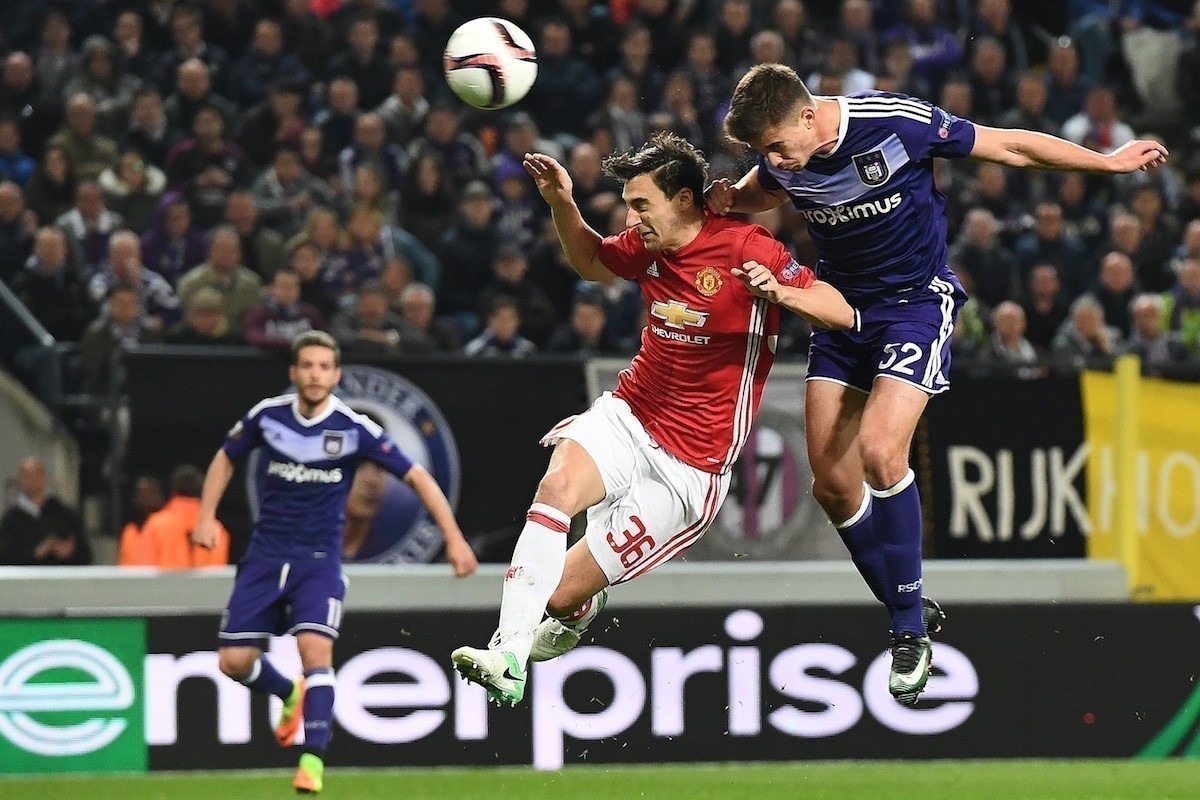 If Chelsea don't budge on their asking price for Matić, a shock move for Anderlecht's Dendoncker could be on the cards, according to reports in Belgium.

The 22-year-old defensive midfielder faced Mourinho's men in the Europa League knockout stages last term and even scored against the Old Trafford side, rifling a bullet of a header beyond Sergio Romero in the first leg at Constant Vanden Stock Stadium.

It is believed that the young anchor man impressed Mourinho in the tie and United will be sending scouts to assess him further over the next few days.

Ibrahimović arrived in England last summer with no shortage of doubters. At 34 it was reasoned the former AC Milan and Ajax striker was too old and too slow to cut it in the Premier League.

But 17 league goals, 28 in all competitions, an EFL Cup and Europa League title later, those dissenting voices were rendered silent.

A cruciate knee ligament injury suffered in April bought Ibrahimović’s fairytale season to an abrupt climax, and, out of contract, the player was released at the end of the campaign.

There remains a possibility, however, that the Swede will re-sign with United once he has completed his rehabilitation. The 35-year-old will be basing his recovery at the club’s facilities and should be ready to return to action in January.

“Possible, it’s open,” Mourinho said recently when asked whether he’d bring Ibrahimović back in January. “Of course we wanted to be honest and open and let everything for him to make the decision.

“I don’t think before December he can get back to competitive football, but why not wait for a player who gave us so much.

“We are changing ideas and it’s with Mr Woodward and Zlatan’s agent but the final decision is the best for the player.”