This summer is a big one for Liverpool as Jürgen Klopp looks to use Champions League football to entice players Anfield as they try and compete for the Premier League title.

After starting brightly last season, Klopp’s side faded and ended up finishing in fourth, 17 points off leaders Chelsea.

While that may have been a disappointment after it looked like the Reds were in the title race, securing Champions League football was a major improvement on the eighth-place finish of 2015/16.

Liverpool have already started work in the transfer market, with Mohamed Salah arriving from Roma, Andrew Robertson making the move to Merseyside after Hull City agreed to part with him for £8million and Dominic Solanke trading Stamford Bridge for Anfield.

But, if reports are to be believed, these arrivals were just the start of Liverpool’s spending this summer.

Here, we take a look at the top five Liverpool transfer stories according to the Football Whispers Index, which scores the validity of transfer rumours out of five, to see who could join Salah and Co at Anfield this summer. 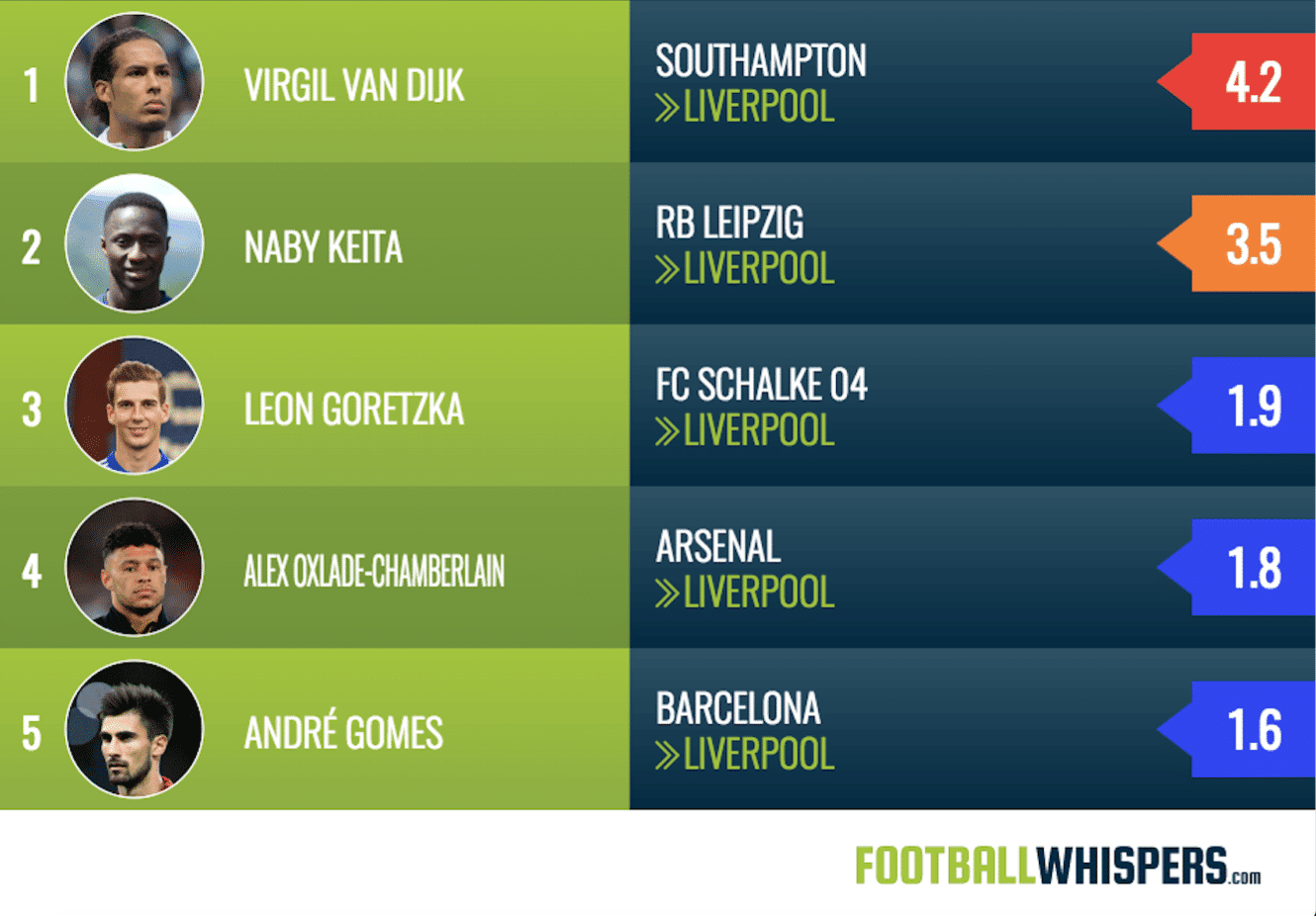 Liverpool may have publicly ended their interest in the Dutch centre-back but behind the scenes it appears to be a very different story.

van Dijk is still Klopp’s top summer defensive target and that the former Celtic man still harbours hope of playing for the Merseyside club next season.

The Dutch defender has told new Saints manager Mauricio Pellegrino that  and has subsequently been left out of Southampton’s pre-season training camp in France.

And Alfie Jones wearing van Dijk's number 17 shirt in a friendly only added to the speculation.

Southampton have slapped a £70million valuation on their dominant centre-back and while Manchester City and Chelsea were also said to be courting van Dijk, their interest cooled when it became clear he wanted to play for Klopp.

Pep Guardiola’s side have gone about rebuilding their squad this summer, however, there’s not been a new centre-back in sight, yet. So they could revisit their earlier interest in the player as the window draws to a close.

Antonio Conte, meanwhile, wanted van Dijk but had to settle with Antonio Rüdiger. Having signed the former Roma centre-back it’s unlikely the club will delve into the market to bring another to the club in the same window.

It means it’s an intense staring contest between Liverpool and Southampton for now. Who will blink first though?

The RB Leipzig midfielder has been a long-term transfer target for the Reds. The saga started back in April when it was revealed the box-to-box midfielder was at the top of Klopp’s summer wish-list.

A move initially looked unlikely with the Bundesliga side claiming they weren’t a selling club, and that no means no.

However, as the window has progressed Leipzig's stance hasn’t been as solid as it once appeared to be. BILD have claimed Bundesliga outfit want €80million for the dynamic midfielder and Oliver Mintzlaff, a senior member of RBL, was recently quoted as saying “€75million wasn’t enough” to convince them to part with Keita.

A club determined not to sell wouldn’t be doing their best to convince Liverpool to increase their offer, would they?

The relationship between player and club appears to have deteriorated with director of football Ralf Rangnick questioning Keita’s effort in training – he was involved in a small bust up this week after clashing with Diego Demme which resulted in training being cancelled.

Rangnick then claimed Keita had been given bad advice from his entourage and those in his home country but he’s still holding a grudge with the player’s agency, Arena 11, after their involvement in Sadio Mane’s move from Red Bull Salzburg to Southampton.

WE LOOKED AT WHERE KEÏTA MIGHT FIT IN AT LIVERPOOL GIVEN HE’S GOT HIS HEART SET ON A MOVE TO ANFIELD.

Raphael Honigstein used his Twitter account to reveal Goretzka had an agreement in place with Bayern Munich to join them next summer. However, the player himself has labeled these suggestions as “complete nonsense”.

Goretzka, who is sidelined with a thigh injury, told reporters at Schalke's training camp in Austria: “I understand, of course, that the topic keeps people busy.

“I have made a clear point on this issue: if a decision is made, I will communicate it. Since this is not the case, I cannot report anything new.” 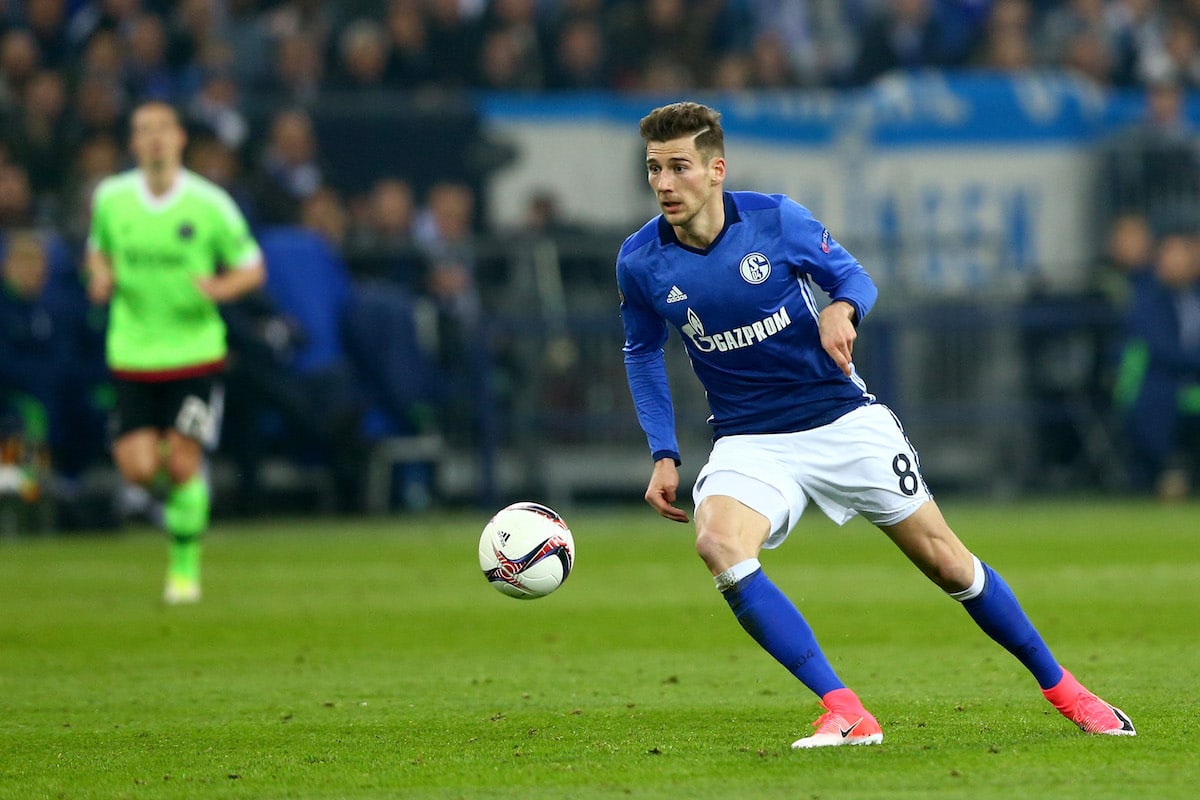 On talk of an agreement being in place for 2018, Goretzka said: “There is no agreement, this is complete nonsense!”

The 22-year-old has been linked with Liverpool with a number of months and could be viewed as an alternative to Keïta if a deal can't be struck for the Guinean international.

The Reds were lining up a move for the England international, who can play on the wing, in the middle of the pitch, or at wing-back, in January, according to The Guardian.

But with Arsenal battling Liverpool for a Champions League spot, Arsène Wenger’s side didn’t want to strengthen a rival.

However, the situation has changed now and the 23-year-old has just 12 months left on his contract.

The Gunners don’t want him to run his deal down and leave on a free transfer, so they are willing to sell.

The Independent reports a bid of £25million could see him leave, with Liverpool in the driving seat. According to the Liverpool Echo, the Reds want to be heavily involved in any bidding war for the former Southampton man.

Barcelona are determined to bring Philippe Coutinho to the Nou Camp sooner rather than later – the 25-year-old has already been the subject of a £72million offer from the Catalan club.

Liverpool rejected the bid and claimed the Brazilian magician wasn’t for sale.

However, reports have emerged which claim the La Liga club have promised to sign Coutinho to convince Neymar to remain at the Camp Nou.

The Barcelona forward is a top target for Paris Saint-Germain but Catalan side aren’t giving up on him without a fight.

Coutinho could be a long-term replacement Andrés Iniesta. But he won’t come cheap. Liverpool have slapped a £133million price tag on their Brazilian, according to Sport.

Barcelona, though, are prepared to part with players to push the price down. Andre Gomes is one of the names mentioned after the Portuguese midfielder failed to live up to the hype after his €35million move from Valencia last summer.

There is potential there and he could be an asset, but is he a good fit for Klopp’s Liverpool?