Everton are on the verge of making another signing in the form of 20-year-old Nigerian striker Henry Onyekuru but will he be joined by any of the other players linked with a switch to Goodison Park?

Onyekuru is set to join from Belgian side KAS Eupen for £6.8million, with the youngster expected to be loaned to Anderlecht next term to gain experience.

The Nigerian will be the Toffees' third signing of the summer after the captures of Jordan Pickford and Davy Klaassen, taking the Merseysiders' spending beyond the £50million mark.

Ronald Koeman doesn't appear to be putting the club's chequebook back in his desk drawer any time soon however, with Everton still linked with a host of incomings.

The Football Whispers Index takes all the latest transfer stories and gives them a score out of five based on their reliability and validity. Here, we analyse the five hottest Everton transfer rumours. 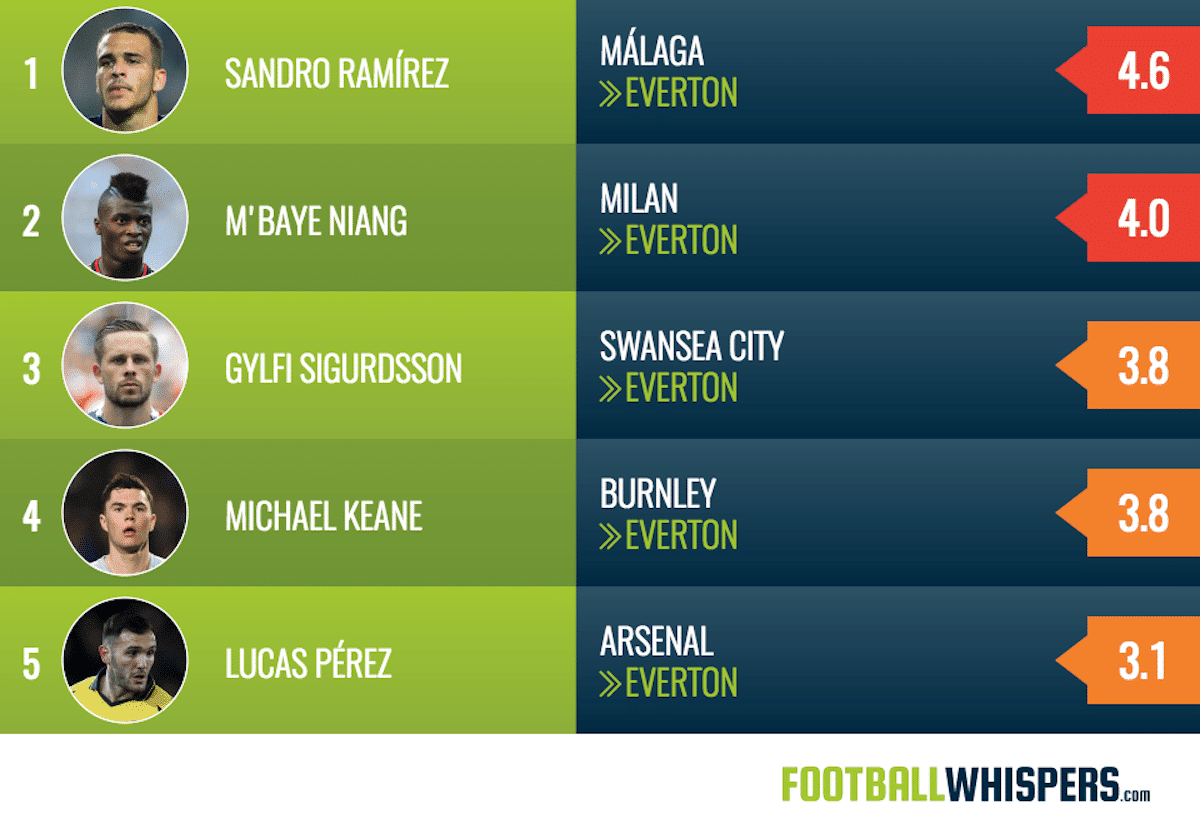 Málaga striker Sandro Ramírez seemed all set to seal a switch to Atlético Madrid this summer before the Court of Arbitration for Sport decided to uphold Los Colchoneros' transfer ban.

Diego Simeone's loss looks set to be Koeman's gain, as the former Barcelona prodigy, who scored 14 La Liga goals in 30 appearances last term, has already been to Liverpool to discuss the particulars of a move to Everton, and has even passed a medical according to the Liverpool Echo.

The transfer is set to be completed when Sandro returns from international duty with Spain at the European Under-21 Championships in Poland later this month.

However, the 21-year-old marksman has recently become the subject of Real Madrid transfer rumours, so Everton may still need to act quickly to tie him up for certain, with Marca reporting Los Blancos want the youngster to replace Manchester United-bound Álvaro Morata.

With a release clause just £5.2million, Sandro could prove to be one of the bargains of the summer.

Everton's recruitment guru Steve Walsh was in Milan earlier this month, reportedly with the purpose of meeting with the city's two Serie A powerhouses to discuss signings.

One name mentioned was AC Milan's gifted, yet temperamental, forward Niang. The Frenchman spent the second half of last season on loan with Watford and the Rossoneri are thought to be open to parting ways with the former Genoa loanee permanently this summer.

The former France under-21 international, who has scored 12 goals in 77 first-team appearances for the San Siro giants, is valued at £13.2million, a figure Everton would have no trouble meeting.

However, Calciomercato believe the 22-year-old is stalling on talks with the Toffees as he prefers a move to Arsenal.

After securing a £26million deal for Dutch international Klaassen, Koeman is keen to further bolster his midfield options with the addition of Sigurðsson from Swansea City.

West Ham United, Leicester City and Southampton are all interested in signing Sigurðsson this summer, but Everton are thought to be at the front of the queue.

According to The Sun, Swansea have slapped a £30million price tag on their former Tottenham Hotspur star, a sum which would rule most of the interested parties out of the equation, but not Everton. 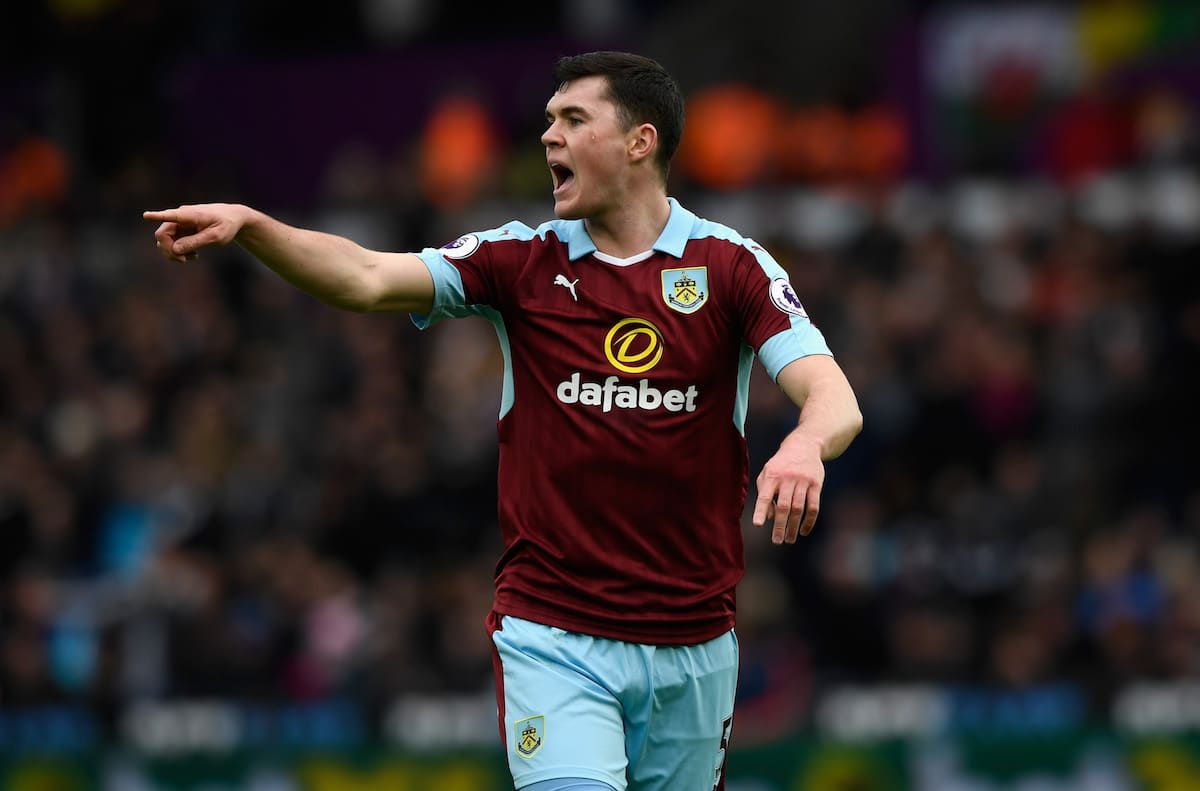 Previously linked with a return to former club Manchester United, any plans Keane had of an Old Trafford return appear to have been scuppered by the Red Devils' £30million signing of Swedish centre-back Victor Lindelöf from Benfica.

The 24-year-old England international was outstanding for Sean Dyche's Burnley last season and is primed for a move to a club with European aspirations.

Keane was rumoured to be a Liverpool transfer target, but the £25million-rated defender is now firmly in Everton's sights, with The Sun boldly claiming a deal to take the commanding stopper to Goodison Park could be wrapped up in a matter of days.

One possible alternative to Sandro could be fellow Spaniard Lucas Pérez, who has been a peripheral figure for Arsenal since moving to the Emirates last August.

Pérez was only trusted to start twice in the Premier League last season, making a further seven appearances off the bench and scoring just a single goals. However, in all competitions, despite a severe lack of opportunity, he managed a respectable return of seven goals in 21 outings.

The Sun believe Koeman is weighing up a £20million offer for the 27-year-old. A bid of that size would surely prove tempting for the Gunners, who only signed Pérez for £17million from Deportivo La Coruña a year ago and are now closing in on the capture of French striker Alexandre Lacazette.

With Romelu Lukaku still looking likely to leave the club, Everton may want to invest in more than one marksman to replace the prolific Belgian, so it may not necessarily be a case of either/or with Sandro and Pérez.