Chelsea manager Antonio Conte was left frustrated when Manchester United pipped the Blues to the £75million signing of Romelu Lukaku from Everton last week, but the Italian tactician will press on with his transfer plans.

Powerful German centre-back Antonio Rüdiger has already arrived from Roma to bolster the Stamford Bridge side's back three, but Conte is still believed to be keen to add a striker, central midfielder and wing-back.

With Diego Costa set to depart the Premier League champions this summer, Chelsea will likely be spending a large chunk of their budget on replacing the Brazil-born Spain international, but deals for other positions appear nearer to completion at this stage.

The Football Whispers Index gives every transfer rumour a score out of five; the higher the score, the more likely the deal is to happen.

Here, we analyse the top five Chelsea transfer rumours to see who could be lining up at Stamford Bridge in the coming season. 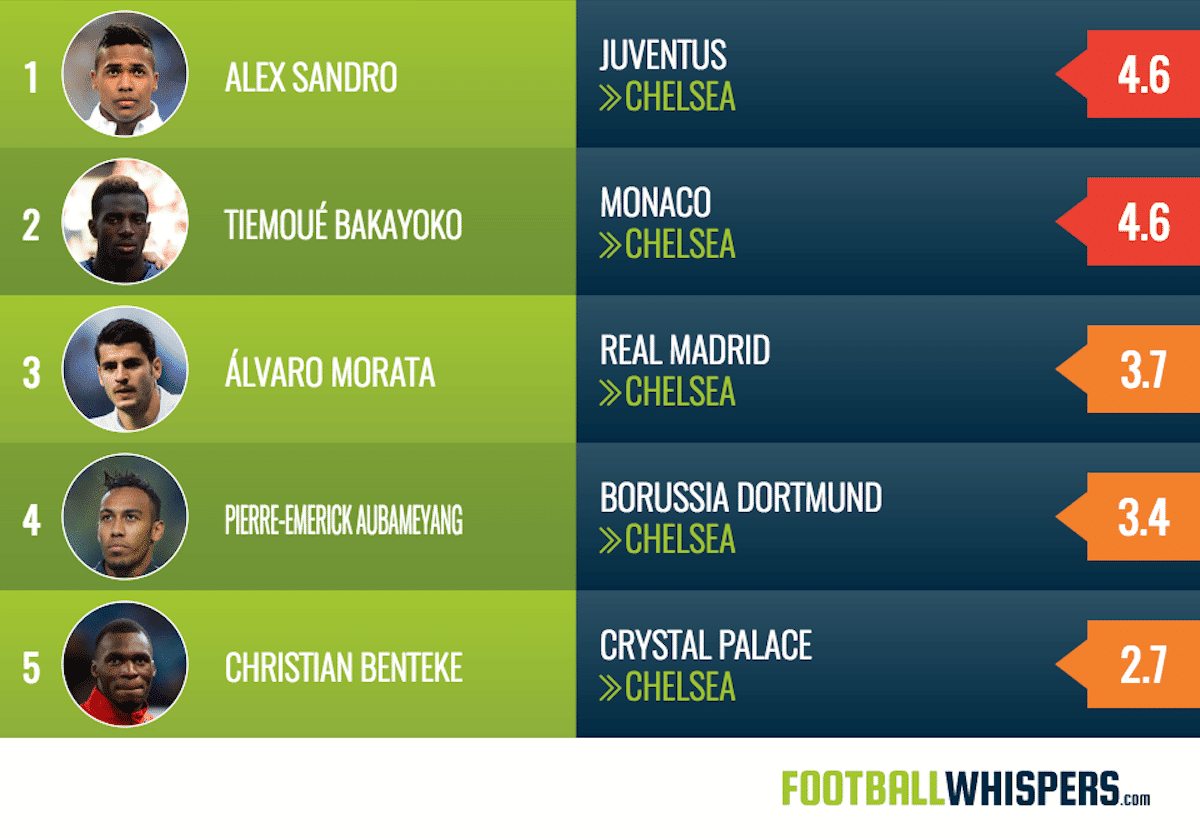 But it seems that Conte is looking to upgrade on the former Sunderland defender and Juventus‘ flying Brazilian Sandro is the man identified for the job.

The Blues are reportedly willing to pay up to £60million for the player, which would make the former Porto star the most expensive defender in history, topping the £50million Chelsea paid to re-sign David Luiz a year ago.

The Italian champions are reluctant to lose their star wing-back, but the Turin club operates with a policy of allowing any player to leave if they so desire, providing a suitable offer is on the table.

Sandro was said to be keen on a switch to Stamford Bridge, where he would earn much more than Juventus can offer him. But Sky Sports now claim that the 26-year-old is having second thoughts about leaving Italy.

Chelsea have been on the brink of completing a move for Monaco midfielder Bakayoko for several weeks now, with the player having already travelled to London and completed a medical.

RMC Sport in France reported that the Blues had agreed a fee with the French champions, making it seem a mater of time before the one-cap Les Bleus player becomes Chelsea's latest signing.

But weeks later the deal is still not over the line. The Express and the Daily Star both claim that Manchester United are attempting to hijack the Stamford Bridge club's move for Bakayoko, with a £40million bid gazumping the £35million reportedly on offer form Chelsea.

However, the west Londoners remain confident of landing their man in the coming days, with the delay put down to a minor knee problem discovered during the medical process. 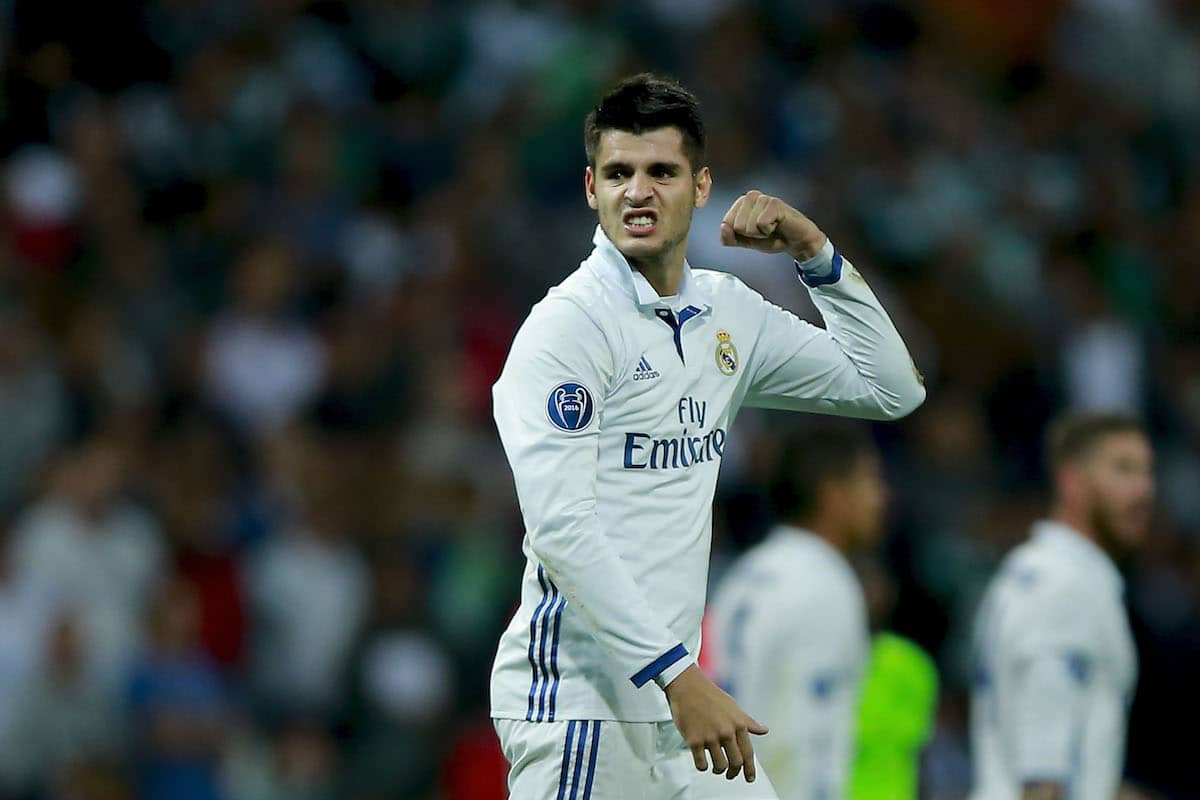 Manchester United were believed to be close to signing Morata before they switched their attention to Lukaku.

This has left the Spanish striker in limbo; not a regular starter for Real Madrid he was said to be keen on a move to Old Trafford to secure first-team football and stake a claim to lead the line for La Roja at next summer's World Cup.

However, after facing disappointment in their own efforts to sign Lukaku, Italian transfer guru Gianluca Di Marzio reports that Morata, along with Torino striker Andrea Belotti, is now a Chelsea transfer target.

Madrid are believed to want as much as €90million for the 24-year-old.

According to Sky Sports, Chelsea have been offered the chance to sign Aubameyang from Borussia Dortmund.

The 28-year-old striker, who was a Manchester City transfer target a year ago, finished as the top scorer in the Bundesliga with 31 goals in 32 games for BVB, with 40 strikes across all competitions making 2016/17 the most productive campaign of his career to date.

The Gabon national team captain has made no bones about his desire to play for Real Madrid, but is seems the Spanish champions are not interested in the €70million-rated centre-forward.

Former club AC Milan, however, emboldened with new riches thanks to a recent takeover, are believed to be hot on Aubameyang's tail, and may contest Chelsea's interest.

Aubameyang is perhaps the highest-calibre striker on the market this summer and would be a fine addition to most sides.

But, at 28, the hefty price tag for a pace-reliant player already in his peak may be putting potential suitors off.

A left-field inclusion on this list, Crystal Palace target man Benteke is believed to be an alternative option for Chelsea.

The Daily Mail claim that the Belgian striker is being considered by the recruitment department at Stamford Bridge, although no mention is given as to whether he is viewed as a squad player or a starter.

Palace signed Benteke from Liverpool for £32million last summer and the 26-year-old retuned a respectable tally of 15 league goals for the struggling Eagles.

Strong in the air and adept at holding the ball up, the 32-cap Belgium international would help fill the void of physicality that Costa's anticipated departure will leave. But Chelsea fans are unlikely to be too enthusiastic with the reports of their club targeting the former Aston Villa man.