After a slow start in the transfer market Chelsea have been busy in the past fortnight, spending nearly £130million to bring three of Antonio Conte's principal targets to the club.

Antonio Rüdiger was first to sign, joining from Roma, before Tiemoué Bakayoko made his long-awaited switch from French champions Monaco. And the Blues' capped their round of spending by bringing Álvaro Morata in from Real Madrid.

But Conte is not done in the transfer market. The Italian clearly wants another striker and a left wing-back too.

With that in mind, we've analysed the top five Chelsea transfer targets according to the Football Whispers Index.

Our unique algorithm pulls together data from a number of metrics to give each rumour a score out of five. The higher the score, the more likely the deal is to happen. 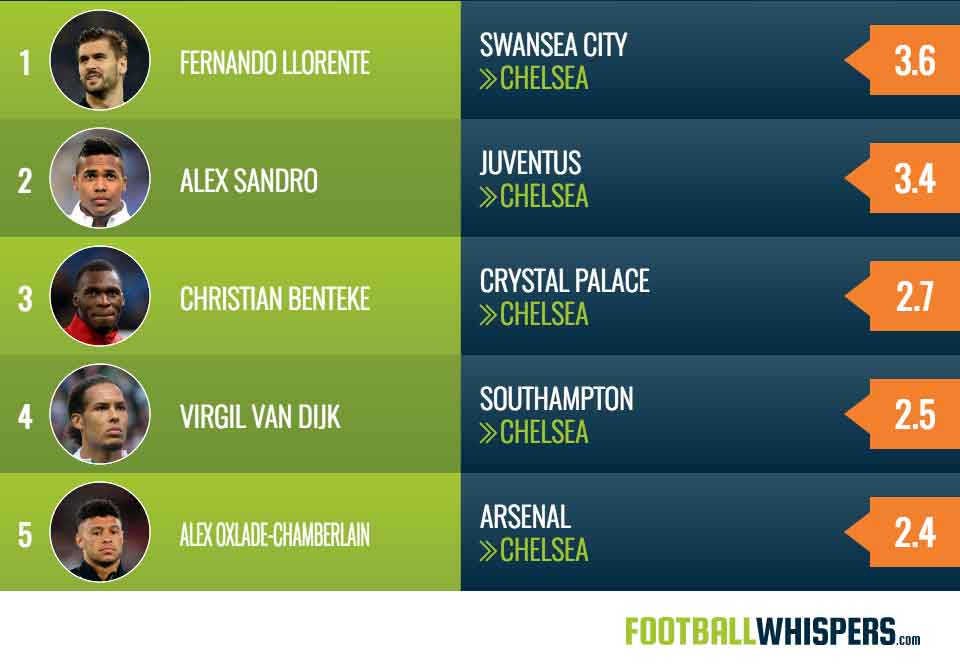 The Swansea City hitman was wanted by Chelsea during the January transfer window as back-up to temperamental striker Diego Costa. But – unsurprisingly given his importance to the Swans – a deal never got off the ground.

Now, having scored 15 times to keep Paul Clement's side in the Premier League for another year, a deal could be rekindled for the Spaniard, who played under Conte at Juventus.

Chelsea, despite splashing £55million on Morata this summer, need a striker to offer cover and competition for the ex-Real Madrid man. Michy Batshuayi has performed well in the absence of Costa, who will join Atlético Madrid, but the Belgian never had Conte's trust last season and made just one top-flight start.

Fernando Llorente would bring a lot of know-how to Stamford Bridge and provide an alternative to the more mobile Morata up front. But whether former Athletic Club striker – who is sidelined with a broken arm sustained while cycling on holiday – would want to play a back-up role remains unclear.

Juventus wing-back Alex Sandro was heavily linked with the Blues earlier in the summer but their interest appears to have cooled if talk in the media is anything to go by.

A £60million price was mooted at that point and – despite Benjamin Mendy's £52million move to Manchester City this week – that would make him the most expensive defender in the history of football.

While there is no doubt the Brazilian would be the perfect fit for Chelsea, having played the wing-back role in Turin, the Blues already have the impressive Marcos Alonso in the same position.

The Spaniard, who joined from Fiorentina last summer, was a revelation last season and, therefore, Conte is in no rush to spend the reported £60million on the 26-year-old when he already has an adequate option for the position.

Adding further weight to the notion Conte is after a more muscular forward to provide competition for Morata are links with Crystal Palace forward Christian Benteke.

There is no doubting the Belgian's importance to Palace but, if Chelsea come knocking, the chance to prove his worth at a top-four side – following a disappointing stint at Liverpool, would be hard to turn down.

However, the stumbling block would be his price tag. The Eagles will want to make a profit on the former Aston Villa hitman and that would make him a very expensive back-up option for the Blues who would still like to finance a deal for a left-sided wing-back.

A long-term Liverpool transfer target, talk around Virgil van Dijk's future has died down since Southampton threatened to report the Merseyside club over an illegal approach for the Dutchman.

Van Dijk, who would surely fetch a world-record fee for a defender, has, however, been left out of the Saints' travelling squad for their pre-season training camp in France.

However, Chelsea have already spent £29million on Rüdiger and do not need another senior centre-half competing for a starting berth.

One of skipper Gary Cahill, David Luiz or César Azpilicueta will miss out next season as it stands. The competition for places at centre-half has seen Kurt Zouma join Stoke City on loan and Nathan Aké sign for Bournemouth.

The Blues have Andreas Christensen returning from a loan spell at Borussia Mönchengladbach and he could save the west Londoners paying big for van Dijk or his ilk.

Another player Liverpool and Chelsea are reportedly keen on is the versatile Alex Oxlade-Chamberlain.

The England international found minutes hard to come by at the Emirates Stadium last season.

Despite that, the man who was once typically a winger filled in impressively in unfamiliar wing-back and central midfield roles.

That kind of versatility would be welcomed by Conte who, with a small senior squad, needs greater depth to compete in Europe and in the Premier League this season.

However, Oxlade-Chamberlain, at 23, has reached a crossroads in his career where he needs to secure regular game time in order to progress.

Already part of a plethora of attack-minded midfielders at Arsenal, his first-team prospects are unlikely to improve at Stamford Bridge.

That said, if he is OK to be part of a squad challenging on two fronts in the Premier League and Champions League, he could prove to be a very good addition at Stamford Bridge.