Rangers have made an underwhelming start to their new campaign, with an early Europa League exit followed up by inconsistent performances in the Scottish Premiership.

A 2-1 win away to Motherwell was a solid start to the league season, but a 3-2 defeat to newly promoted Hibernian and a 0-0 draw with struggling Heart of Midlothian – both at Ibrox – erased any momentum they may have regained.

Currently, Rangers sit sixth in the table. While it’s early days, the five-point gap between them and Celtic, St Johnstone and Aberdeen is not a promising sign. With time and training, Pedro Caixinha will be hoping to improve his side on the training ground. However, further new additions could be made.

Here, using our unique algorithm that rates transfer rumours out of five depending on their probability, we at Football Whispers have analysed the top four Rangers rumours. 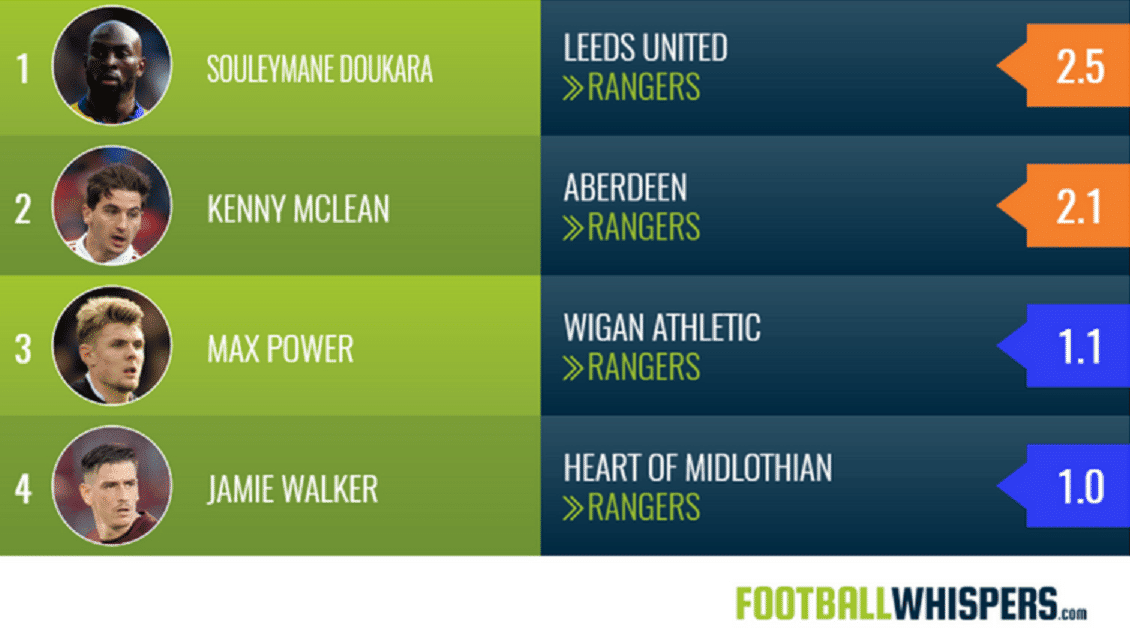 Leeds United have made a number of signings this summer, with the attacking midfield area clearly being prioritised. Samuel Sáiz and Ezgjan Alioski have both arrived to join up with Kemar Roofe and Pablo Hernandez, leaving Doukara out in the cold.

The French-born winger or striker had not made an appearance for the club this season, despite playing an important role in their Championship play-off push last term. Then, on Wednesday evening, it was confirmed by the Yorkshire club on twitter than Doukara had been released.

Doukara has been linked to Rangers and the latest news of his exit from Elland Road will only fuel those rumours. His power and athleticism would give Caixinha a boost in attacking firepower, while his ability to play up front or wide on either flank would give the Portuguese vital extra options.

Earlier this summer McLean was believed to be one of Rangers primary targets, and it was easy to see why. A technically gifted operator with a fine passing range, he would have brought creativity to Caixinha’s midfield.

However, Aberdeen were in no mood to negotiate for the sale of one of their star players to a domestic rival, particularly given Ryan Jack had already made the move to Ibrox. They turned down a reported £300,000 bid for their left-footed playmaker and an improved offer has yet to come their way.

Rangers are said to remain interested in McLean, but Dons chairman Stewart Milne recently dismissed the idea of there being further sales this summer, stating:

“No [there won’t be any more outgoings]. We have ended up with a very good squad. We are every bit as strong as we were last year and maybe a bit stronger when they all gel together. The players we have brought in are going to contribute a great deal this season.”

Rangers have already reinforced their central midfield options substantially through the signings of Ryan Jack and Graham Dorrans. The Scottish duet have settled well to life at Ibrox, putting in some impressive displays.

However, recent rumours suggest that Caixinha could soon have another option to call upon in this area of the team, with Wigan Athletic’s Max Power being linked to the club.

The 24-year-old was statistically one of the Latics’ best performers in the Championship last season. He averaged more passes per game than all bar one of his team-mates and did so at a success rate of 80.4 per cent.

It was previously reported that Power could be available to leave for around £500,000, though Rangers would face competition for his signature from Sheffield Wednesday and Cardiff City.

Such was the intensity of speculation linking Walker with a move to Rangers earlier this summer, the player found himself distracted to the point of being left out of the Hearts side.

The Jambos’ interim head coach Jon Daly stated at the time that:

“A club have made an offer for him, it’s kind of turned his head a bit. He is mentally not in the right place.

“We need everybody on board at the minute…and everyone pulling in the same direction. Jamie is a little bit off where he needs to be, fitness-wise, in terms of mentality.”

Walker was back in the side for the trip to face Rangers last weekend, but he remains heavily linked to Rangers and is seen as the type of inventive attacking midfielder that would enhance their attacking output.