Time is running out for Premier League clubs. The January transfer window closes on Wednesday evening, leaving 72 hours to get any remaining business over the line.

There are a number of big-money deals expected to be completed in the coming days and here at Football Whispers we'll keep you across everything that happens before the window slams shut on January 31.

With the help of our unique transfer algorithm we've compiled the ten most likely incoming Premier League deals as things stand. The algorithm gives each deal a number on a scale of one to five with five the most likely to happen and one the least. 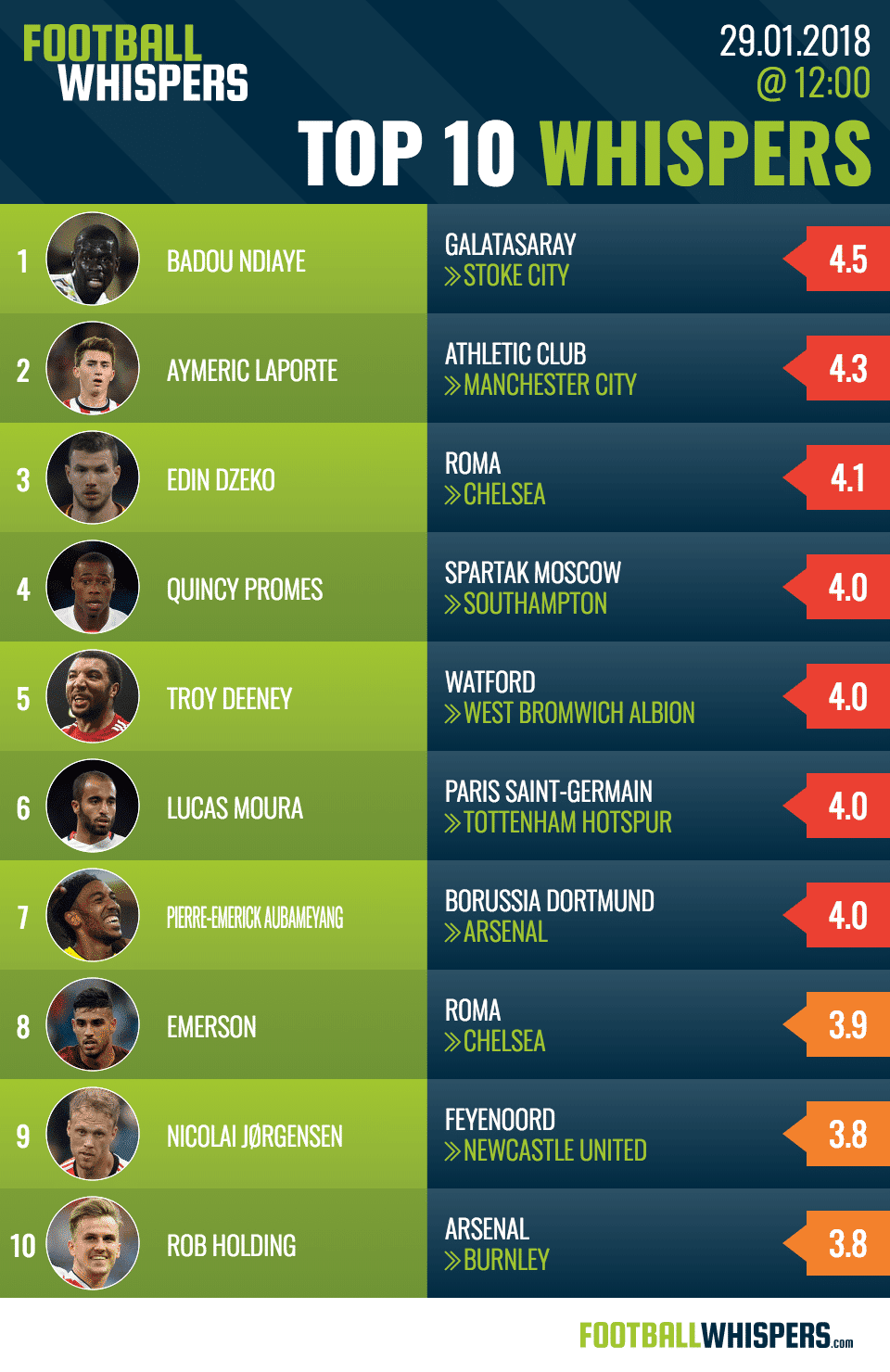 New Stoke boss Paul Lambert has barely had time to get his feet under the table at the Bet365 Stadium after replacing Mark Hughes but is already planning his first signing.

Galatasaray midfielder Ndiaye, 27, is a Stoke transfer target and the Potters will, according to The Sun, have to pay around £17million to bring the Senegalese to the Premier League. A £14million offer has already been rejected.

Manchester City's need for a centre-back is no secret. With Vincent Kompany no longer to be relied upon thanks to his plethora of fitness woes, the Premier League leaders are relying on John Stones and Nicólas Otamendi staying injury free.

Athletic Bilbao defender Laporte is one of Spain's finest and City have triggered the 23-year-old's release clause of £57million. According to BBC Sport, he will undergo his medical in England shortly.

Antonio Conte has wanted an alternative to Álvaro Morata since last summer. Chelsea's failure to sign Fernando Llorente last summer frustrated the Italian coach who does not trust Michy Batshuayi to lead the line in the Spaniard's absence.

Reported moves for Andy Carroll, Peter Crouch and Ashley Barnes have since fallen by the wayside. But a deal for Roma's 31-year-old hitman, Džeko, is still in the pipeline with The Sun claiming the Italians are ‘evaluating' offers.

A deal for Spartak Moscow's Dutch international Promes is one such option. The 26-year-old has 25 caps for the Netherlands and has hit double figures in each of the last four seasons for Spartak – just the kind of impetus the goal-shy Saints need.

The Watford captain has not enjoyed the best of seasons. He has yet to score from open play in the Premier League this season, with both his goals coming from the penalty spot, and has twice found himself suspended.

New West Bromwich Albion manager Alan Pardew has made a new striker his priority and a deal for Deeney, valued at around £21million, is to be discussed by the two clubs, according to Sky Sports News.

Not wanted at Paris Saint-Germain, with the club trying to raise cash to offset against the cost of Neymar's world-record move last summer, Brazilian winger Lucas is one expendable commodity.

The 25-year-old, who was a Manchester United transfer target until recently, is expected to join Tottenham for around £25million in the coming days, according to The Sun, having made just five substitute outings for PSG in Ligue 1 this term.

An Arsenal transfer target throughout the January window, the Borussia Dortmund forward has burned his bridges at the Westfalenstadion with a string of disciplinary issues.

However, despite seeing two bids for his services knocked back, report a £55.4million offer has been accepted by the Bundesliga side.

A new left wing-back has been near the top of Conte's wish-list since last summer when Juventus‘ Alex Sandro was a Chelsea transfer target. However, a price could not be agreed.

However, a move for Roma defender Emerson looks to be on the cards, regardless of whether Džeko moves to Stamford Bridge this month. The 23-year-old, who is expected to cost around £20million, should be in England on Monday, according to the Daily Mail, to complete the formalities on the move.

The man they have turned to in the search for goals is Feyenoord's Nicolai Jørgensen. The 27-year-old has seven Eredivisie goals in 14 starts this season, building on the 21 he managed last term. According to The Times, Newcastle's £20million offer was rebuffed but Rafael Benítez wont admit defeat.

It's been a fine season for Burnley who are riding high in the top half of the Premier League at the half-way stage and manager Sean Dyche is keen to consolidate the club's position.

According to the Daily Mail, the Clarets will attempt to do so by taking Arsenal defender Holding on loan for the second half of the campaign. The 22-year-old has made just five Premier League starts for the Gunners this season and would relish regular minutes.