It's transfer deadline day for Premier League clubs. Your television is a sea of yellow, you've been glued to Twitter since you woke and you've achieved absolutely nothing at work.

Never fear, Football Whispers is here with a comprehensive run-down of all the major Premier League deals which could still happen at 2pm on deadline day.

Our unique algorithm gives a score out of five to each transfer rumour. The higher the number, the more likely the deal is to happen. So here are the ten most likely deadline day deals at 2pm. 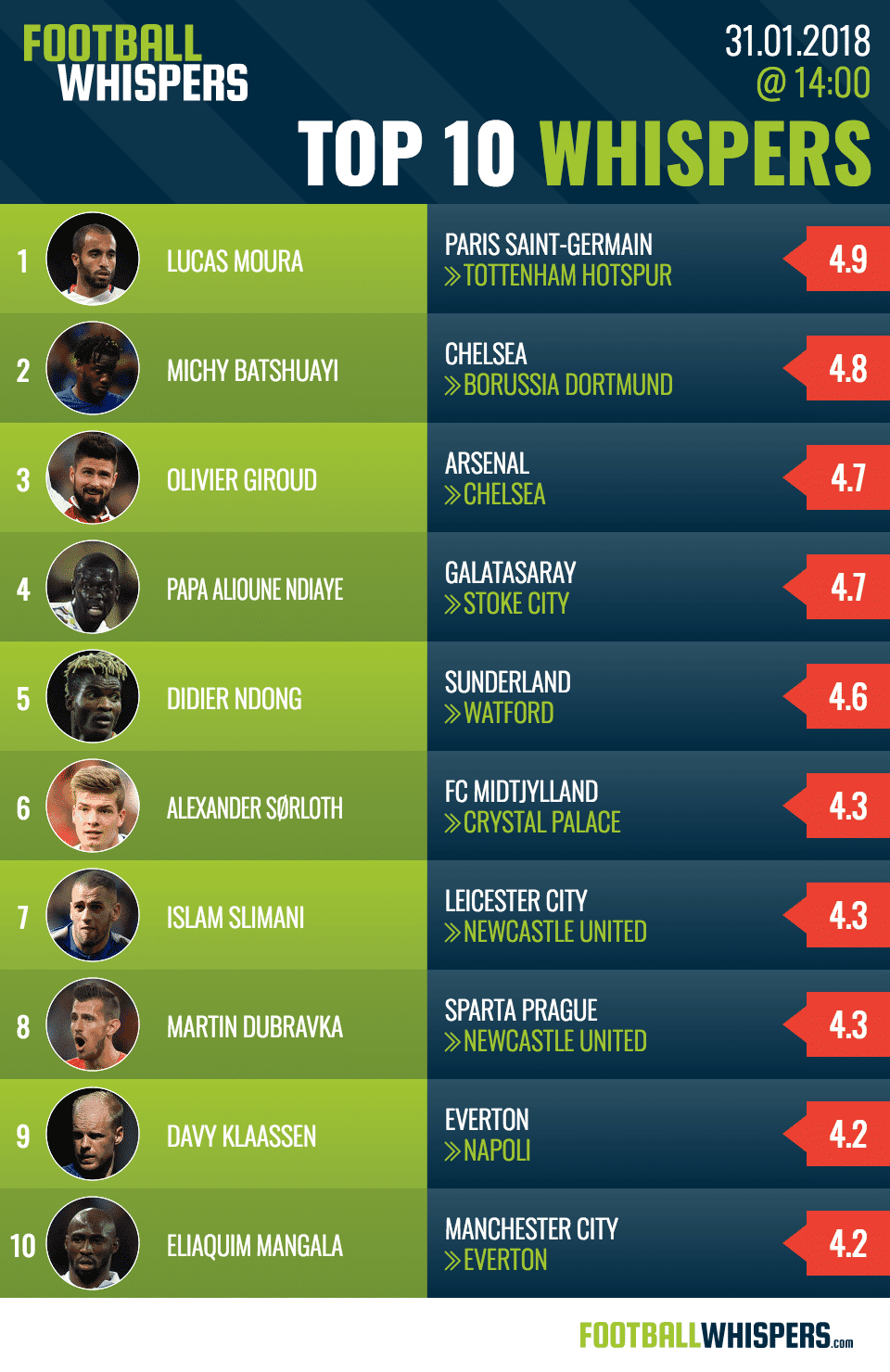 Paris Saint-Germain have been trying to get the winger off their books since the world-record signing of Neymar last summer. The Parisians need to recoup some cash after splashing £198million on the former Barcelona forward to avoid Financial Fair Play sanctions.

And PSG expect to pocket £25million from Tottenham Hotspur for Lucas who has been frozen out this season, making just five substitute appearances in Ligue 1. Sky Sports News report he has successfully undergone a medical.

Chelsea misfit Batshuayi has been having some fun at the media's expense, it seems, tweeting a bat emoji – a reference to his ‘Batsman' nickname – alongside black and yellow moons, the colours of Borussia Dortmund.

That seems to suggest the Belgian, who has never earned Antonio Conte‘s trust at Stamford Bridge, will complete a move to Dortmund to replace Pierre-Emerick Aubameyang following his move to Arsenal this morning.

With Arsenal finally completing the signing of Aubameyang earlier in the day, Giroud‘s future looks to be away from the Emirates Stadium.

The French international needs minutes in the second half of the season in order to force his way into Didier Deschamps' squad for the summer's World Cup. According to The Sun, an £18million fee has been agreed with Chelsea and the 31-year-old forward is currently undergoing a medical.

It has been a quiet window for struggling Stoke, though most Potters supporters would just have been happy to see Mark Hughes leave.

Having got that wish, Stoke now look set to complete the £15million signing of Galatasaray's Senegalese international midfielder Ndiaye, who would become Paul Lambert's first signing since succeeding Hughes in the dugout. According to Sky Sports News, he has passed a medical.

The Sunderland midfielder has been a Watford transfer target throughout January and finally looks set to complete a move from the Championship strugglers to Vicarage Road.

Signed for £17million last season by David Moyes, the Gabonese will join on loan for the rest of the season, according to the Watford Observer, and has the option to make the move permanent in the summer.

A name which has come out of nowhere is FC Midtjylland striker Sørloth. The Norwegian, 22, could be the man to solve Roy Hodgson's long-running striker headache.

The Eagles have been in the market for a forward since last summer and look to have settled on Sørloth who has scored ten in 19 for Midtjylland this season. Danish outlet BK Sport say the forward is bound for England to undergo a medical.

Few Premier League clubs can be as desperate at Newcastle to bolster their squad in the final hours of the transfer window but, at long last, Rafael Benítez's prayers look like being answered.

Signed for a club-record £29million in the summer of 2016, Slimani has rarely been first choice at Leicester but that should change at St James' Park. The Leicester Mercury says the deal is not done yet, but the Algerian should join on loan until the end of the season.

As well as a striker, Benítez has been desperate to bring a new goalkeeper to Newcastle since the summer. Rob Elliot and Karl Darlow have shared the No.1 shirt this season but neither has fully convinced.

Enter Sparta Prague keeper Dúbravka. The 29-year-old Slovakian international is, according to Sky Sports News, expected on Tyneside for a medical this afternoon. His arrival would see England Under-20 international Freddie Woodman move out on loan.

Everton's summer splurge was meant to be the start of an exciting new era at Goodison Park but Klaassen, signed from Ajax for £25million, was just one of several big-money flops.

The Dutch international has not played in the Premier League since September and a move away from Merseyside looks likely. Napoli, according to BBC Sport, could take the 24-year-old midfielder on loan for the rest of the season.

Arriving at Goodison could be Manchester City outcast Mangala. The French centre-back spent last season on loan at Valencia but returned to City in the summer.

He has been largely restricted to run-outs in the cups this season and after City signed Aymeric Laporte from Athletic Bilbao, his chances of first-team football have been further reduced. According to Sky Sports News, the Toffees will rescue Mangala on loan.