Clubs in the Premier League, armed with the riches of the new television deals, went about upgrading their attacking ranks this summer. The arrivals of Álvaro Morata, Alexandre Lacazette and Mohamed Salah meant four of last season’s top six had added to their fire power, including the champions.

Manchester United pipped Chelsea to the signature of Romelu Lukaku, Tottenham Hotspur managed to keep hold of hotshot Harry Kane and Pep Guardiola finally come up with a way to include both Gabriel Jesus and Sergio Agüero in his starting XI.

Teams at the top clearly had one agenda in mind; to fire their way into the Champions League places. The competition for a place in Europe’s elite competition is fierce and, as cliched as it sounds, goals change games. Clubs were stocking up.

With the Premier League newboys all finding their feet in the early weeks of the campaign, and those who have been calling it their home for a number of years continuing on where they left off last season, there’s been a number of hotly-contested debates with regards to just who is the best forward in the English top flight right now.

Comparing forwards across tactical systems is difficult – while Roberto Firmino might be expected to supply chances as much as he is meant to score them, Lukaku is seen as much more of an archetypal goal-scorer.

Both models measure the quality of a chance, either taken by a player for xG, or assisted by him for xA, by looking at the historical conversion of similar shots.

Expected goals models quantify the probability of a shot going in based mainly on its location and angle to goal; expected assists models credit the player who played the key pass for its quality.

For a broader explanation of expected goals, watch the below video.

To compare players fairly, we have used the per 90 minutes version of these stats. We have also excluded players who have featured in less than 50 per cent of league games this season, which equates to 315 minutes.

The results will surprise you.

Fear not, Tottenham fans, your hero is not being undervalued here. Kane’s role in the Spurs side is less creative than that of others on this list, and so he is let down mainly by a low chance-creation rate (0.05 expected assists per 90, which suggests that in 20 full matches of that output, we might expect him to assist one goal).

His season thus far actually illustrates the advantage of using metrics like xG. Although his August drought worried many, the chances he were getting suggested he would start scoring before long – a point resoundingly vindicated by his September.

The 26-year-old is still finding his feet in a perpetually changing Arsenal attacking line-up but delivers whenever Arsene Wenger has decided to use him.

Lacazette was the match winner against West Bromwich Albion as well as notching in victories over Bournemouth and Leicester City. He’s not just a goal threat, though, creating chances for his teammates with a handy 0.12 expected assists per 90.

He’s been one of the key reasons the Gunners haven’t been hurt by the absences of Mesut Özil or Alexis Sánchez.

Given our methodology aims to evaluate the rate at which a player creates and scores chances, perhaps Welbeck’s inclusion is less surprising than it may initially seem.

But there is no doubt about his ability on the pitch, only over his ability to stay on it. Injuries have plagued Welbeck since his time at Manchester United.

Scheduled to return later this month, it may finally be Welbeck’s season if he manages to stay fit and continues to perform at the rate he has thus far, 0.61 xG and 0.2 xA per 90.

You'd be forgiven for being surprised at this one. Though Okazaki is an likable player, whose immense work-rate has won over Leicester fans more than his goal-scoring has, an impressive start to the season has flown a little under the radar.

The first of three Manchester City players on the list. His partnership with Agüreo appeared to finally be clicking but the Argentine forward is now ruled out for the foreseeable future after injuring his ribs in a car crash.

In his absence, the pressure will be on Jesus to carry City's title challenge and if he manages to continue his current form then they have every chance of keeping pace at the top until the 29-year-old returns.

Jesus is an interesting forward – although he possesses the dribbling ability of a winger, successfully taking on an opponent 1.2 times per 90, he is more of a poacher than a creator with 0.80 xG per 90 but only 0.03 xA per 90.

In Agüero’s absence, the Brazilian’s role may change slightly depending on how City choose to adapt. 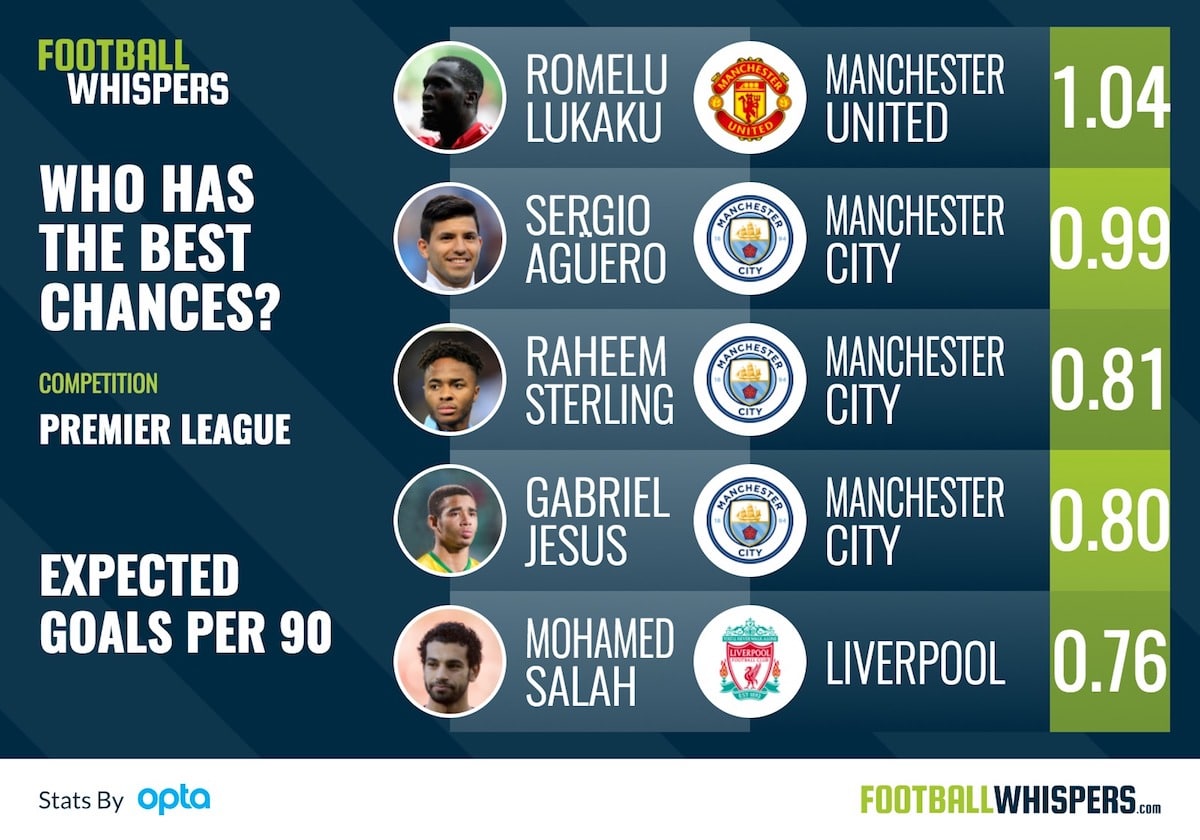 Not everyone was convinced when Chelsea parted with £70million to bring Real Madrid's back-up striker Morata to Stamford Bridge in the summer having missed out on Lukaku.

The talent was there but many weren't sold on his goalscoring ability. The 24-year-old netted 20 for Real Madrid last season but people downplayed it because of the dominant team he was spearheading. However, his early season form for Antonio Conte's men has shut a number of doubters up.

Morata comes in fifth on our list after proving himself to be an all-round striker, with 0.12 xA per 90 to complement his 0.70 xG per 90.

The Chelsea reject arrived at Anfield for a then club record £39million and was under intense scrutiny from the off. However, he's settled into life on Merseyside with ease and is a force of nature going forward.

For a winger, Salah is exceptionally gifted at getting on the end of chances – his 0.84 xG per 90 is higher than most strikers on the list, with most of his opportunities coming on his left foot at the right of the six yard box.

In a terrifying Liverpool attack that shares a lot of chances, he also creates 0.2 xA per 90.

The third surprising name on the list and the second City player. Due to the exploits of Agüreo and Jesus, Sterling's blistering start to the campaign has gone unnoticed.

He's not just scoring goals, though, he's scoring big goals. He netted the equaliser against Everton and the last minute winner when City came from behind to beat Bournemouth.

The former Liverpool star has scored three goals in his last three Premier League starts and is terrorising teams with his direct and aggressive style, completing 2.2 dribbles per 90 minutes along with 0.81 xG and 0.24 xA.

After his impressive start to life at Old Trafford, Lukaku was always going to be near the top of this list. Had it not been for the incredible form of a striker playing for United's city rivals he would have won comfortably been sitting in top spot.

He seems perfect for United, and the Red Devils seem perfect for him. This season, he’s been expected to score over a goal per match and, thus far, the Belgian forward is doing just that.

His 0.16 expected assists per 90 is also a healthy level of chance-creation for a striker, indicating that Lukaku is more of a complete forward than he's often made out to be.

It's remarkable to think before the season was underway there were suggestions that Guardiola didn't fancy Agüero and that he wasn't right for the City system.

Before his injury he was in the best form of his career. Granted, the sample size is small but the numbers he was putting up were truly impressive.

And what really stood out this season was Agüero’s involvement as both the creator of the chance and as a goal-scorer.

Along with an eye-watering 0.99 xG per 90, Agüero’s 0.7 xA per 90 is the highest of any Premier League player to have played more than our minutes threshold.

Despite expectations, Agüero was thriving in the two-striker system designed to accommodate both him and Jesus.