Football can sometimes be overcomplicated with people wanting to cover as many bases as possible. Just like inflated transfer fees, it's part of the modern game. But sometimes less is more and when judging attacking midfielders there's no point beating around the bush.

The majority of these players are in the team to aid their attack, whether that be directly with goals or simply by assisting team-mates. A good way to assess their success in the role is by looking at big chances created.

The definition of this is creating a good chance which is commonly scored. This can come via a cross, after dribbling past five opponents or a pass which slices through the defence and finds a team-mate in a dangerous position. There's no right or wrong way.

When looking at the top ten for big chances created by midfielders in the Premier League there are a number of names on the list that many would expect to see. But there are also quite a few surprises. 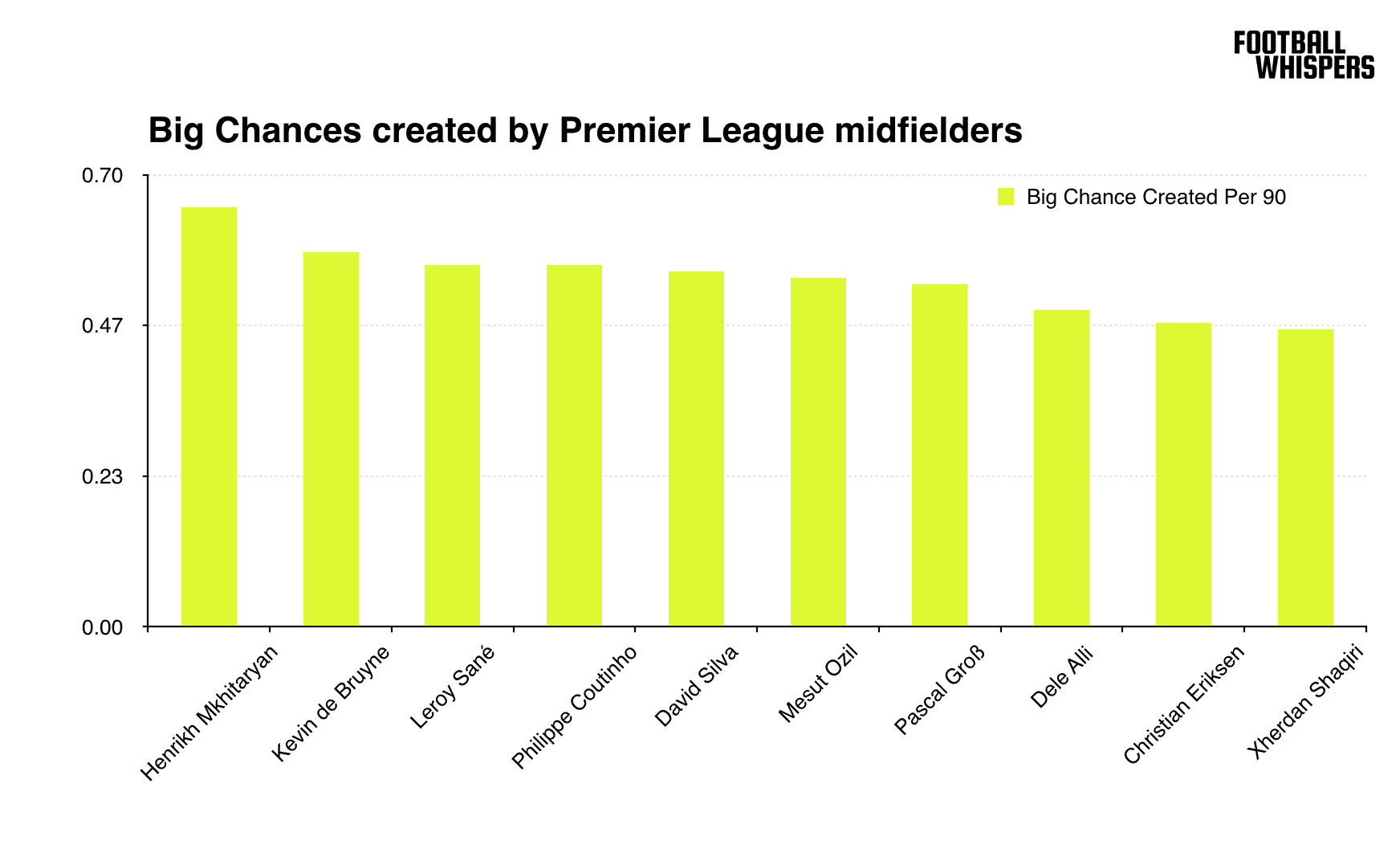 Presented with the opportunity to come up with players with the most big chances created this season, it's doubtful Kevin de Bruyne, Leroy Sané, David Silva, Mesut Özil and Christian Eriksen wouldn't get a mention.

The trio of Manchester City players lead the way for assists in the English top flight this term, while Eriksen (nine) and Özil (eight) both comfortably make the the top ten.

But none of these creative forces top the list. Henrikh Mkhitaryan creates, on average, 0.07 more big chances per 90 than de Bruyne. Surprising given the grief aimed the way of the Armenian this season.

He was used as a makeweight in the deal to take Alexis Sánchez to Old Trafford with the narrative suggesting he'd failed to deliver while in the red of Manchester United but while under José Mourinho he still would've topped this list. It's his form at Arsenal which has seen him climb clear of his Belgian counterpart.

Philippe Coutinho was having quite the season with Liverpool before his January move to Barcelona. The Samba star was creating 0.56 big chances per 90, the closest player to him at Anfield is Sadio Mané but he's creating 0.20 fewer chances than his former team-mate. It highlights just how much of a creative whirlwind the former No.10 was on Merseyside.

Pascal Groß's transition into this Brighton and Hove Albion side has been seamless. A £5million summer signing, which at the time went under the radar due to all the big movers, has turned out to be one of the best bargains in the Premier League in recent seasons.

The German playmaker creates 0.53 big chances per 90, that's just 0.01 fewer than Özil and 0.06 more than Barcelona transfer target Eriksen, all while playing for a Seagulls side which isn't as much of an offensive threat as other teams.

The general perception of Dele Alli this season is that he's been disappointing having failed to get close to the 18 Premier League goals he scored last season. The Spurs midfielder currently has eight and there's just five matches left to play.

But, as revealed in a Harry Kane feature on our website, the former MK Dons midfielder is much more of a creator this season, with Mauricio Pochettino seemingly looking to get the best out England's best striker. Alli's expected goals assisted per 90 is the highest it's ever been and, for even more context, he's created more big chances per 90 than Eriksen and just 0.06 fewer than Silva.

Only three teams have scored fewer goals than Stoke City this term but Xherdan Shaqiri makes the top ten for chances created. The Swiss powerhouse, who was utilised earlier this season as a roaming playmaker in a 3-4-3 system, has created 0.46 big chances per 90. With Stoke on the brink of relegation, could someone pick up a bargain this summer in the shape of the former Bayern Munich man?