West Ham United have landed that elusive midfield player. The Hammers missed out on Gedson Fernandes, with the Benfica wonderkid joining Tottenham Hotspur on loan, but Tomáš Souček has become the first signing of the David Moyes era.

The 24-year-old has caught the eye for Slavia Prague this season, netting 12 goals in just 26 appearances. Of those strikes, two arrived in the Champions League scored against Borussia Dortmund and Internazionale. But the 6ft 4ins behemoth is much more than a goalscorer, he's an old school box-to-box midfielder.

Diligent in his defensive duties, Souček reads the game well and this is a trait he puts to good use in the final third, too. Though not a household name, this is some coup for West Ham.

So what will Souček bring to the West Ham midfield?

For starters, a presence. He stands out on the pitch and the Czech Republic international looks ready-made for the rigours of the English top-flight.

The 24-year-old averages more than 11 ball recoveries per 90 and competes for a remarkable 8.5 duels in the Czech league. He also makes 3.91 interceptions. Souček a ball magnet and he gives his side a lot of defensive protection.

In a sense, he could be Moyes' new Marouane Fellaini. But with a bit more about him. He's too intelligent to just be a target man for a team. 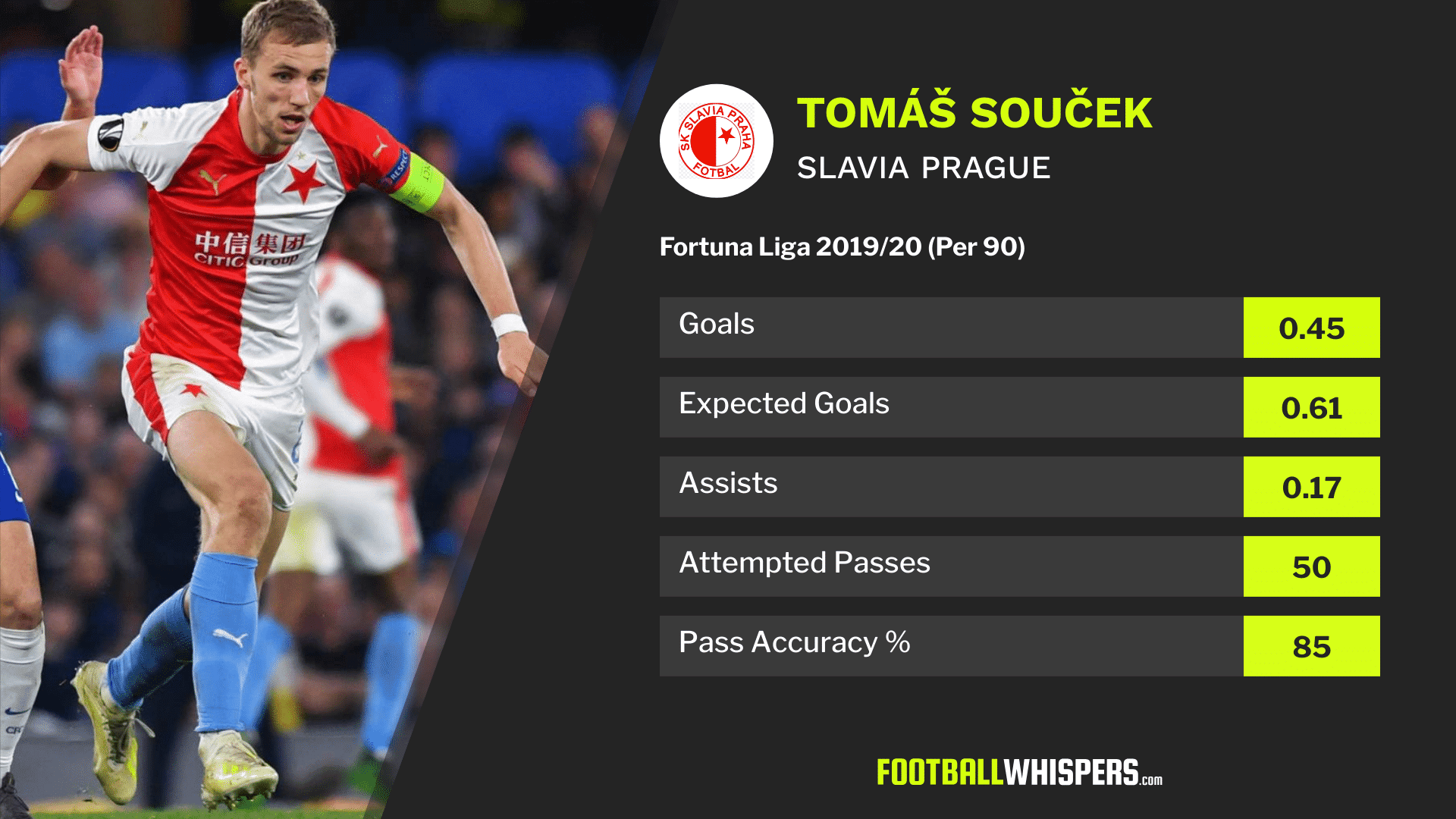 If Souček could be compared to anybody in the Premier League, it'd be the early version of Dele Alli. He makes smart runs into space from deep and that is what makes him as dangerous as he is. He's reliable from the penalty spot but his open-play threat is definitely one of the reasons the Hammers have signed him.

West Ham have managed just 27 league goals this season and £45million club-record signing Sébastien Haller is struggling. Often isolated in the final third, he's not able to link with team-mates and the opposition are able to easily nullify him. To get the club-record signing firing, he needs support. Souček could be just that. He has the potential to be the perfect foil to the Frenchman. 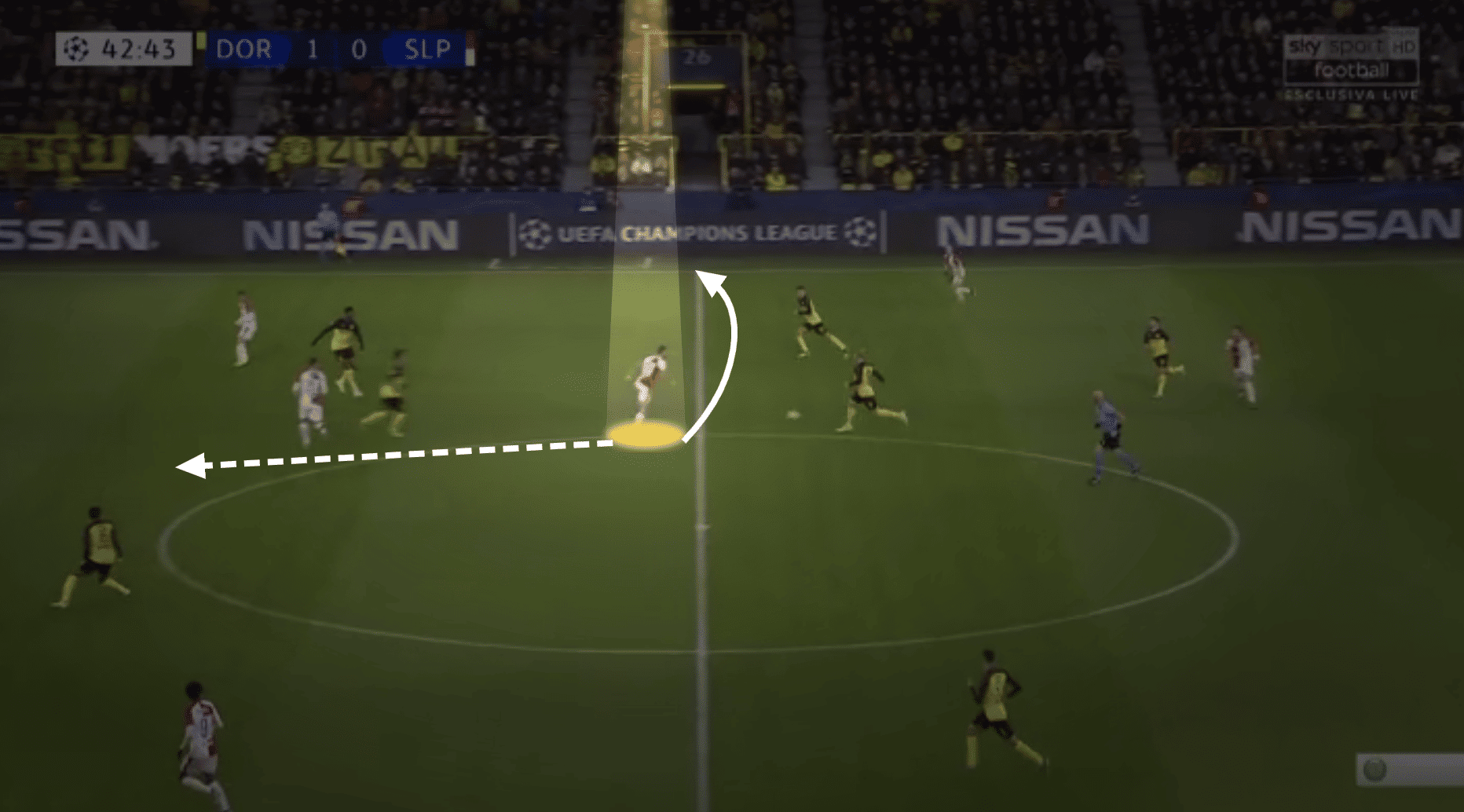 In the still above, the powerhouse midfielder is highlighted in the centre circle. In this phase of play, he pings a pass out wide and turns to run at the Borussia Dortmund defence. 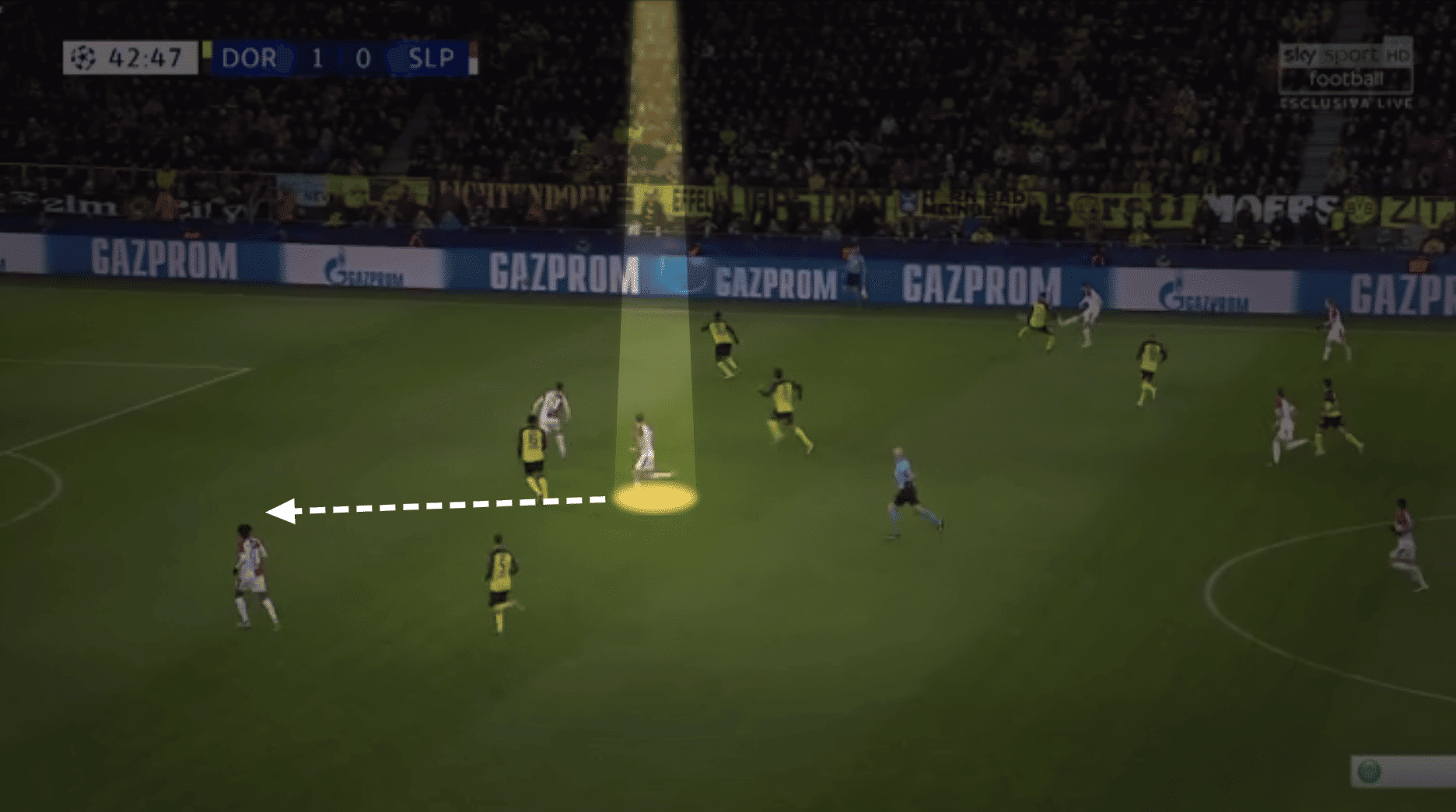 However, he doesn't just support the attackers like some midfielders would. He spots the space and he peels off to position himself between the centre-back and full-back. The ball arrives from the Slavia right and eventually ends up at the feet of Souček on the egde of the six-yard area. He calmly passes the ball past Roman Bürki and the visitors have a shock goal at the Westfalenstadion. One they'd not have without Souček's desire to be a goal threat.

When you watch his goals this season, you can understand why he's averaging 0.45 per 90 in the Czech league. He's clever in the penalty area and his movement is eerily similar to that of a forward. 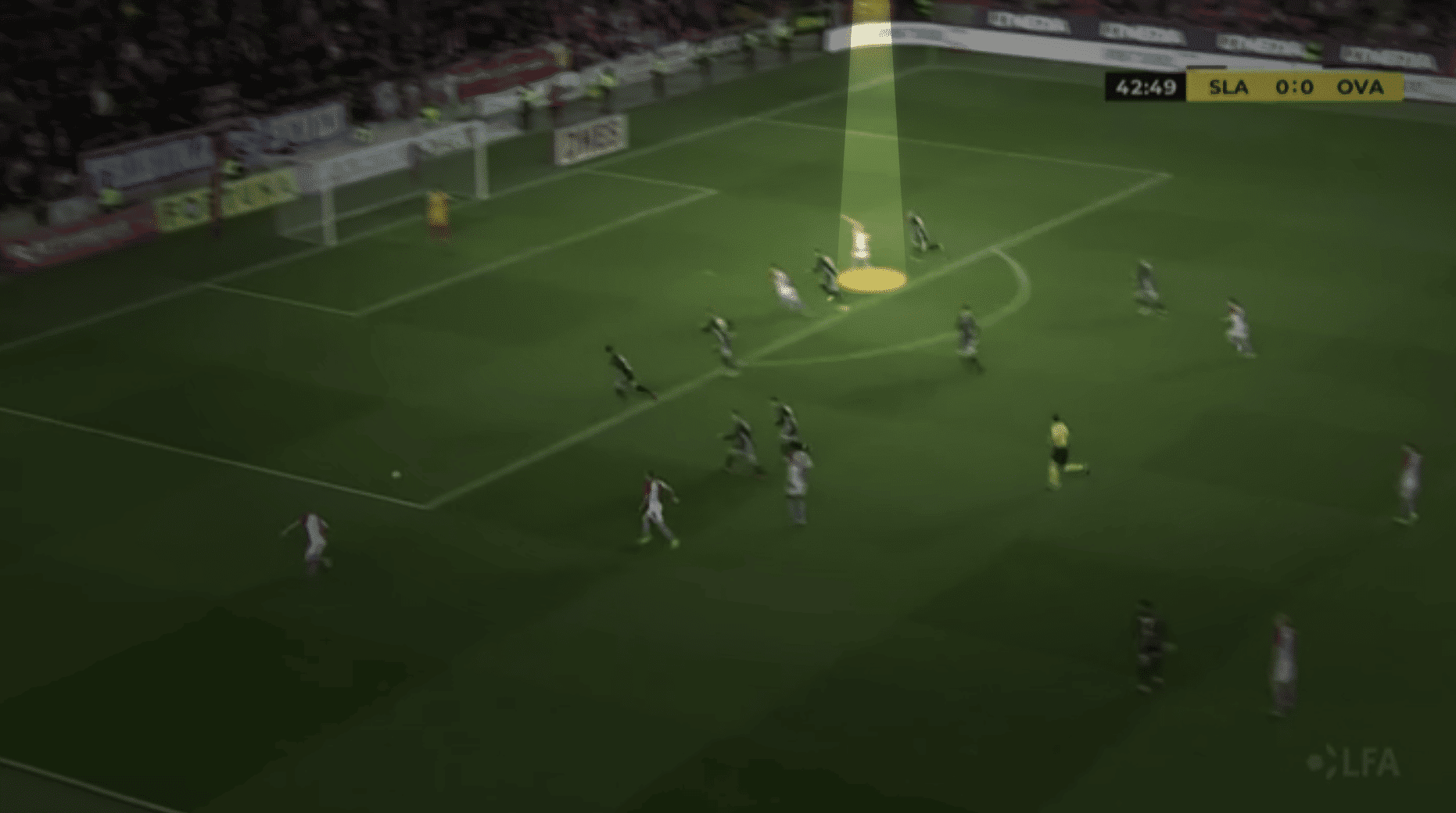 Again, he positions himself between centre-back and full-back. He's looking for an early cross and signalling to his team-mate where he wants it. However, the first time ball doesn't arrive. 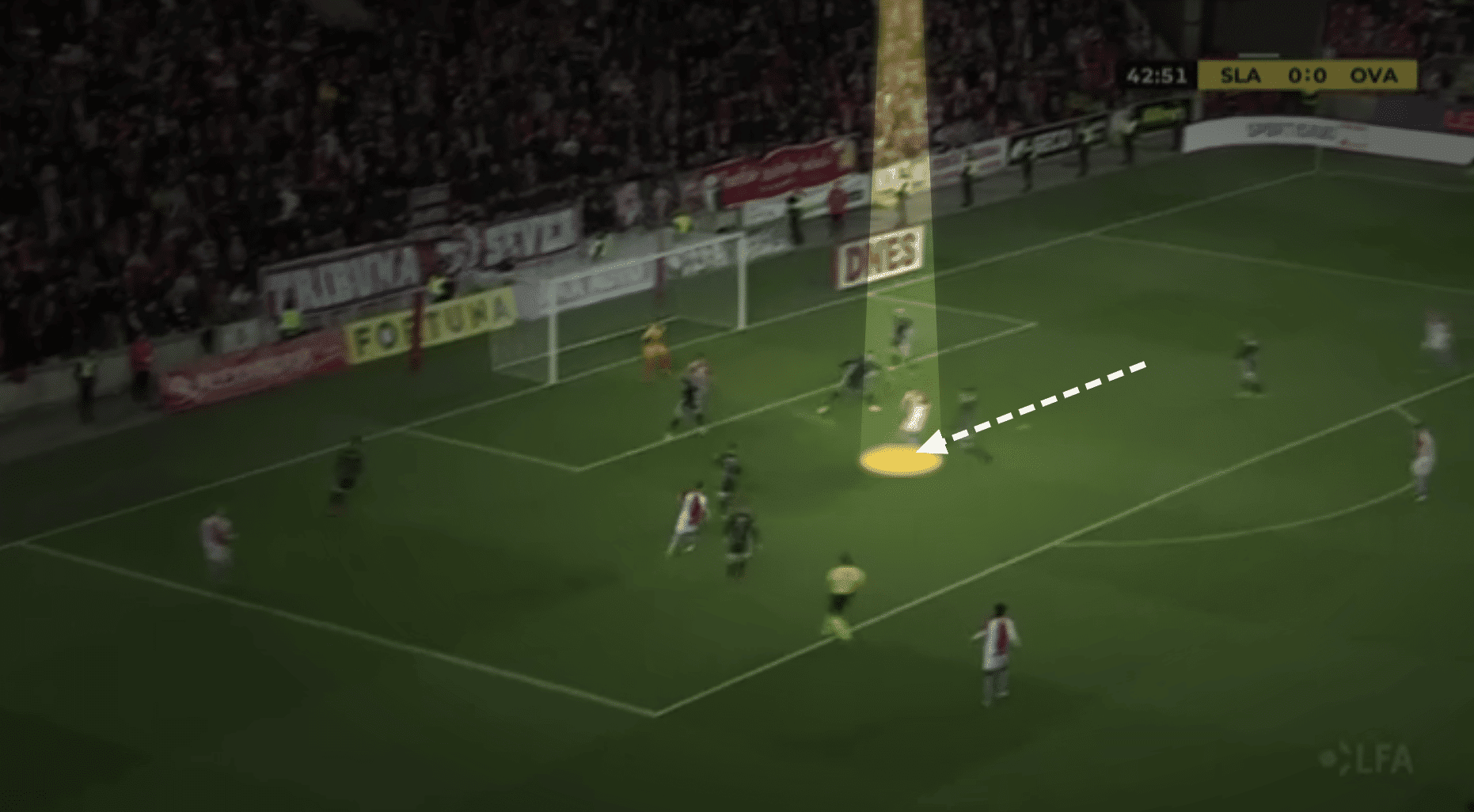 Instead of lingering at the back post, Souček spots the space created by the forward attacking the near post and drifts into a central area. The left-back doesn't match his run and the centre-backs are drawn to the potential ball across goal, failing to position themselves well enough to block the midfielder off.

He's able to latch onto the cutback and emphatically fire the ball home. That sort of movement is usually associated with poachers, not box-to-box midfielders.

Souček is unique and that is why he could be a genuine game-changer for the Hammers. If he hits the ground running, West Ham could easily quadruple the fee they paid for him in a year or two. Missing out on Fernandes could be the best thing that could have happened to them.