When Tom Cleverley joined Watford on loan from Manchester United ahead of the 2009/10 season then-Hornets boss Malky Mackay had to beg, borrow and steal to afford the loan fee.

After six-and-a-half years away Cleverley returned to Vicarage Road on loan from Everton in January. In March the move was made permanent on a five-year contract for an undisclosed fee.

And the Mancunian wrote another chapter in his Watford story on Saturday by scoring his first goal in his second spell at the club to dramatically down Arsenal at the death.

Much has changed for both parties since his first spell at Vicarage Road, yet the move couldn't be more right – on and off the field. Cleverley's switch to Watford has been yet another smart piece of business for the Hornets.

The Watford of 2009 was very different to the club you see now. On their knees and with an uncertain financial future at best, loan signings and free transfers were the order of the day.

In the same summer that Cleverley arrived, Mackay – appointed to his first managerial role after Brendan Rodgers left for Reading – signed players from NK Celje, Carlisle United and Aberdeen.

He also snapped up Henri Lansbury on loan from Arsenal and, crucially, Cleverley. The Manchester United prodigy, who'd helped Leicester City win promotion from League One the season before, ended the campaign with 11 goals from 33 starts and having won Watford hearts and the club's Player of the Year award.

But it was a deal which, owing to Watford's perilous financial state, might not have happened in the first place.

Speaking to Watford's website upon the midfielder's return, Mackay said: “Sir Alex said we could have him and we were delighted as I'd spoken to Ben Foster and he said we should take him in a heartbeat as he never gives the ball away.

“Sir Alex said it would be a nominal fee and that the club secretaries would sort it out. We got Tom to the training ground, showed him around and he was all ready to sign when our secretary came in and said the loan fee was £250,000. We didn't have that money and that we were going to have to send him back.

“I couldn't do it. I had to phone the great man (Sir Alex) twice and told him I knew we'd be selling Tommy Smith soon and could he wait until then. He said: ‘Ok, give us the money when you can'.” 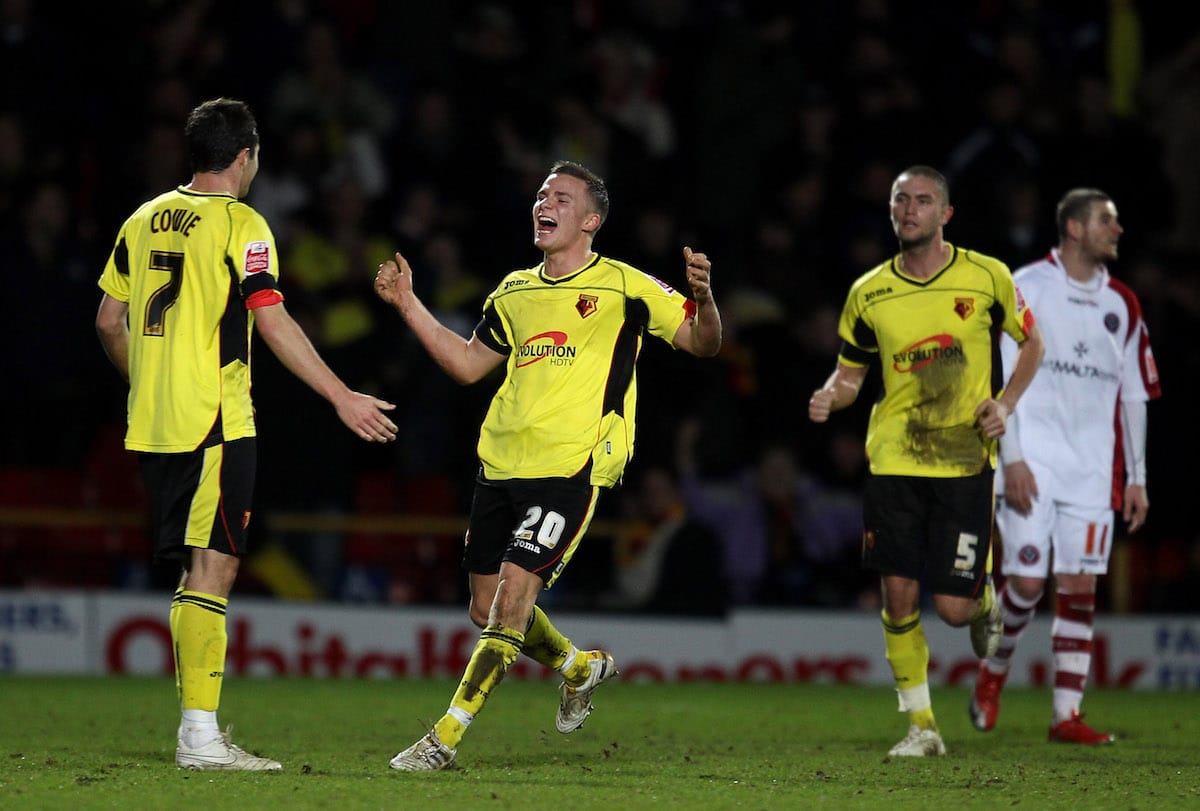 Fast forward almost seven years and Watford are a club on the up. Owned by the Pozzo family and a Premier League side once more, the Hornets play in a ground which is unrecognisable from the one Cleverley left behind.

They have a squad full of international talent and the club's record signing, Andre Gray, cost £18.5million.

Cleverley, meanwhile, returned to WD18 with a Premier League title and two Community Shields to his name as part of Sir Alex Ferguson's final United team. Thirteen England caps are further testament to the 28-year-old's ability.

On re-signing for the Hornets, Cleverley could not hide his delight. “I just jumped at the chance,” he said. “It was the chance to play Premier League football for a club I know well and a club I really enjoyed playing for. I was delighted. I just want to play and do well.”

And that he has. Within minutes of making his second Watford debut as a substitute in a drab 0-0 draw against Middlesbrough in January he hit the post and livened up proceedings.

Cleverley arrived a time when previous club-record signing, £13million Roberto Pereyra, had been badly missed since his season was all but ended by knee ligament damage suffered in the 2-0 defeat to Manchester City in December. The Argentine was replaced by countryman Mauro Zárate in January but too was been struck down by a season-ending injury.

That put the onus on Cleverley to be Watford's creative fulcrum. Walter Mazzarri's side were functional, organised and not a lot else.

They missed the drive and creative spark of the Argentine duo and it was on the Hornets' latest addition to provide the missing link to striker Troy Deeney. 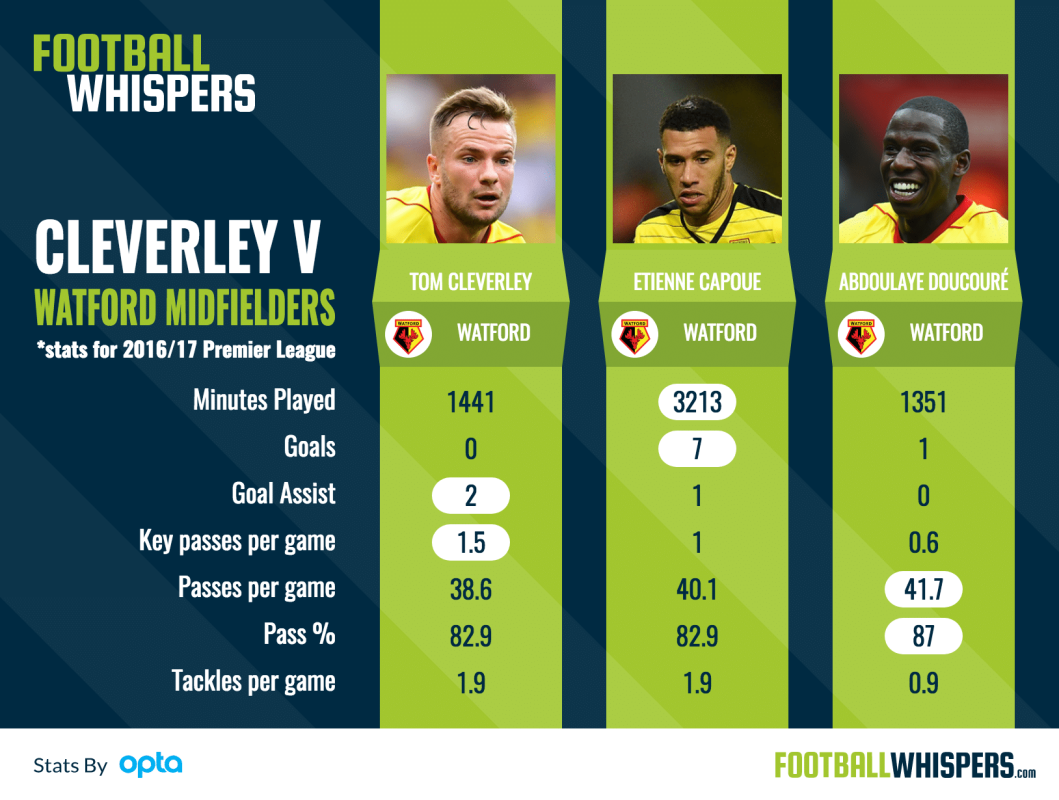 Cleverley created 13 chances for his team-mates in just eight matches. That's nearly as many at Pereyra (15) mustered in four more outings. At 1.6 per game, he was soon the most inventive member of the squad.

The former Everton midfielder finished the season having supplied two assists and averaged 1.5 key passes per game, as well as completing 82.9 per cent of the passes he attempted.

Compared to the eternally frustrating Étienne Capoue – one assist, one key pass per game and the same pass completion – the Hornets' No.8 had made a bigger impression in a shorter space of time.

It has been all change at the Vic this summer. Marco Silva replaced Mazzarri as head coach and quickly revamped the midfield. Pereyra returned from injury, Zaraté was shipped out to Al-Nasr Dubai on loan and Valon Behrami left for Udinese.

Meanwhile, five years on from a stunning loan spell as a teenager, Nathaniel Chalobah re-signed from Chelsea on a permanent basis and was joined in midfield by the imperious Abdoulaye Doucouré and Cleverley.

But Silva's 4-3-3 did not last long. Soon Cleverley was deployed as a No.10 with the other two sitting at the base of midfield and breaking up play.

However, when Chalobah was ruled out until the new year with a fractured kneecap there was only one man to replace the England Under-21 cap; Cleverley. Despite his impressive displays behind Gray, the all-action midfielder dropped back without missing a beat.

Cleverley capped a fine start to the new season with an excellent display and well-taken winner against the Gunners on Saturday evening, refusing to let his new, deeper, role prevent him from popping up inside the box in injury time.

Since the Pozzo family takeover of 2012 the accusation which has been levelled against the Hornets most often is that they have a lack of identity. It is fair to say there has been a revolving door recruitment policy at Vicarage Road in the 11 transfer windows since.

Watford fans will defend their owner to the hilt. The takeover saved the club from the abyss and gave it a bright future at a time when it did not appear to have one. A rotating cast of players – with plenty of duds among them – is a small price to pay for the success which has followed.

But there is more than a kernel of truth in the fact the identity of a club which has prided itself on the development of homegrown players – 60 and counting since the club's Academy opened in 1998 – has been eroded somewhat under Pozzo rule. Only talismanic skipper Deeney remains from the pre-Pozzo era.

That is where Cleverley's worth transcends numbers alone. He is someone who has an affinity with the club and, like Deeney, provides a link to simpler times.

“I'm delighted,” he told Watford' website following the confirmation of his permanent deal. I think it made it clear I have feelings for the club when I came down here on loan and this was always the view – to sign a permanent deal. I am over the moon. I felt part of it all from day one of the loan.

“Now I really feel like this is home and hopefully it is for a very long time.”