January has been a good month for Celtic. Brendan Rodgers' side have recorded three wins from three games – scoring ten goals without reply – and Vakoun Issouf Bayo, Oliver Burke and Timothy Weah have all arrived at the club.

Yet Rodgers hasn't yet finished his winter recruitment drive, and further signings are expected before the transfer window closes tomorrow night.

“We know where we want to improve – whether we can or not, we’ll have to wait and see,” Rodgers told the Daily Record after his side's win against Hamilton on Saturday. “The plan would be to do something but if we don’t, okay. That’s where we’re at.”

Two years ago, when at Hoffenheim, the Germany under-21 international was linked with Tottenham Hotspur. He was viewed as a potential replacement for Kyle Walker, who had joined Manchester City for £50million.

Yet instead of heading to White Hart Lane, Toljan made the move to Dortmund for £4.5million. He made 27 appearances during his first campaign with BVB, displaying his versatility by featuring in midfield and on either side of a back four.

This season, however, things have been very different. The arrival of Lucien Favre, and the loan signing of Achraf Hakimi from Real Madrid, have seen Toljan not only lose his place in the starting XI, but his spot in the first-team squad.

The defender turned down offers from Champions League clubs in the summer as he wanted to fight for his place. “Jeremy has decided to remain with Borussia Dortmund,” his representative Michael Decker told Bild in August. “He wants to accept the competition and prevail at BVB.”

That hasn't happened and Toljan hasn't featured at all for the Bundesliga leaders and has only made the matchday squad on two occasions.

Unsurprisingly, he is now willing to leave Dortmund. And Celtic are hoping to conclude a loan deal until the end of the current campaign. So what can Bhoys fans expect if the 24-year-old arrives?

Given his ability to play in midfield, or even as a winger, it will come as little surprise that Toljan is an attack-minded full-back. That is evident from the 0.22 big chances created per 90 he registered in the German top flight last season, the seventh highest figure of any defender. 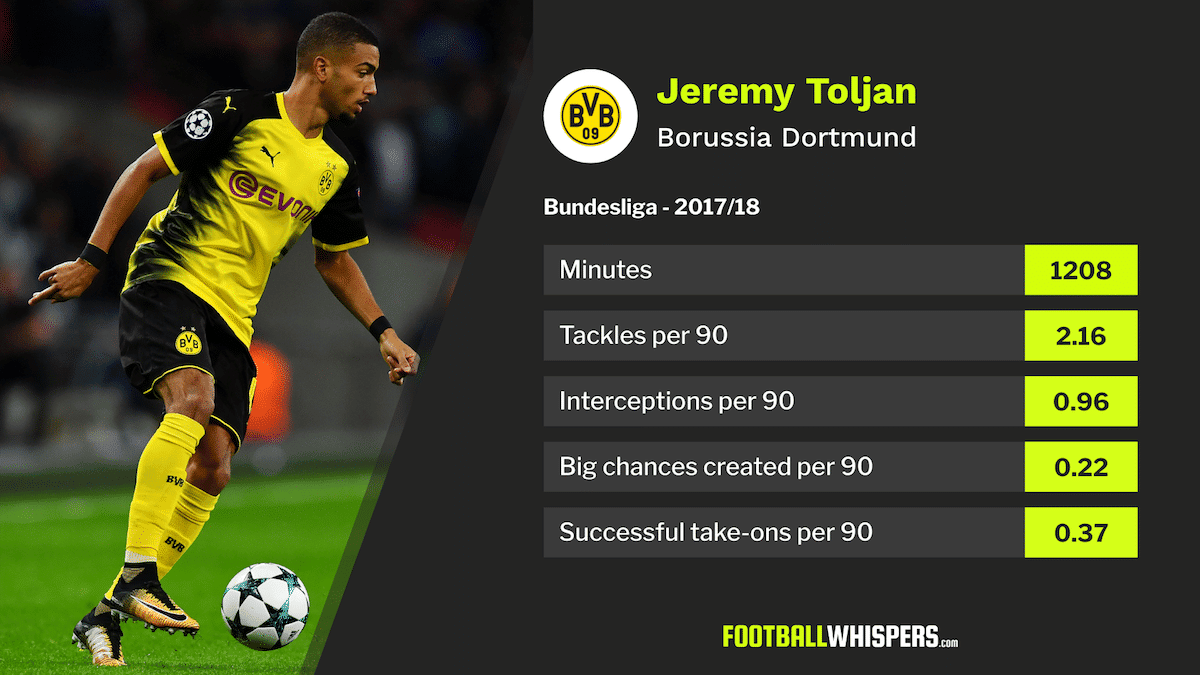 So far, so good. Yet defensively there are weaknesses, which is perhaps why he has fallen out of favour a BVB.

Toljan can often be exposed positionally, and this is exasperated by a tendency to switch off at key moments; against RB Leipzig in October 2017, he was hooked after 45 minutes as he was culpable for the visitors' two first-half goals.

The Football Whispers‘ persona radar above shows Toljan does make a high proportion of blocks, but this is indicative of a defender having to make last-minute interventions to rectify earlier errors.

Of course, the standard of opposition Toljan would face in the Scottish Premiership on a weekly basis will not be of the calibre that he came up against in the Bundesliga and the Champions League last term. And, given Celtic control the majority of domestic games, his defensive vulnerability wouldn't be highlighted as often.

While he would need a period of adaptation, time to build match fitness and confidence, if Rodgers is able to improve the full-back's defensive game, Celtic would possess an excellent weapon.