News from Italy this weekend could have read very well for Arsenal and their summer transfer plans.

After their 4-1 defeat to Roma on Sunday, as well as facing pressure as they try and get their hands on their sixth straight Serie A title, Juventus have apparently cooled their interest in Lyon midfielder Corentin Tolisso.

Speaking to the media after OL’s win over Montpellier, vocal club president Jean-Michel Aulas admitted that an approach had been made, but things had slowed down.

“As for Tolisso, he was approached by a big Italian club that will be in the Champions League Final, but at this moment things have calmed down,” he told TV station Canal+ on Sunday. 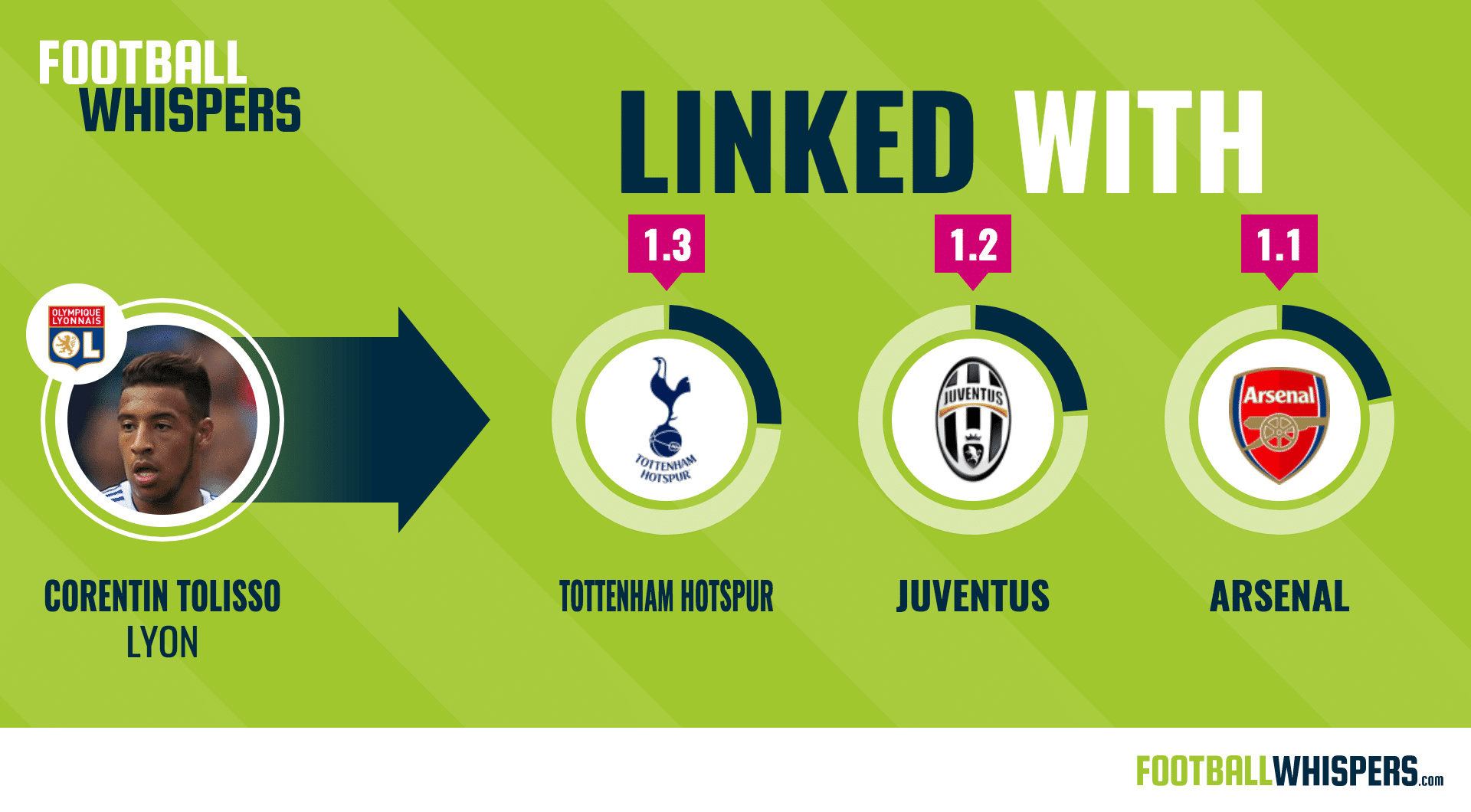 Max Allegri is a known fan, but after the 22-year-old has added 14 goals in 45 games, the French club would be looking for a fee in the region of £30-35million.

Back last summer, the then-21-year-old looked to be minutes away from sealing a €37.5million transfer to Napoli but, after a few days of deliberation and conversations with people close to the player, Tolisso changed his mind at the very last moment and decided to stay with his boyhood club.

However, interest from Juventus and Arsenal could seem too tempting to turn down this year, and with Lyon missing out on a place in the UEFA Champions League, the desire to develop and grow could be too strong for him to turn down a summer transfer.

This campaign, with early-season injuries to Alexandre Lacazette, Nabil Fekir and others, the France Under-21 international was asked to step up, and he didn’t disappoint.

When he broke through at OL, due to his versatility, he made his debut at full-back, and was then asked to play all over the midfield. This season, when called upon, he has also played as a No.10 and even as a false nine when Lyon drew 0-0 away at Marseille.

However, no matter where he plays, he rarely disappoints, scoring eight times in Ligue 1 and adding four assists.

Unlucky not to reach the UEFA Europa League final, Lyon's best performance came when they knocked out Italian side Roma. Lacazette may have stolen the show with his stunning effort from outside the box, but perhaps the best goal of the night came from the 22-year-old.

Two passes to the forward, all one-touch, and Tolisso was free on the edge of the box to fire the ball into the far corner.

If Italy is not in Tolisso’s plans, a move to the Emirates could be more appealing to the midfielder:

“Many clubs make me dream, like Real Madrid, Barcelona and in England with teams like Arsenal,” he admitted last October. “I like the Premier League and I think I am well suited to it.”

The Gunners did spend £34million to bring Granit Xhaka to London last summer and, although he hasn’t quite shown on the grand stage, the Swiss midfielder's numbers have been a lot better than he has been given credit for in his debut campaign.

Whether playing on the left of a midfield three, or beside the Swiss international in a 3-4-3, Tolisso has the perfect skillset to massively improve Arsenal’s chances.

Add a New dimension to the Arsenal Midfield 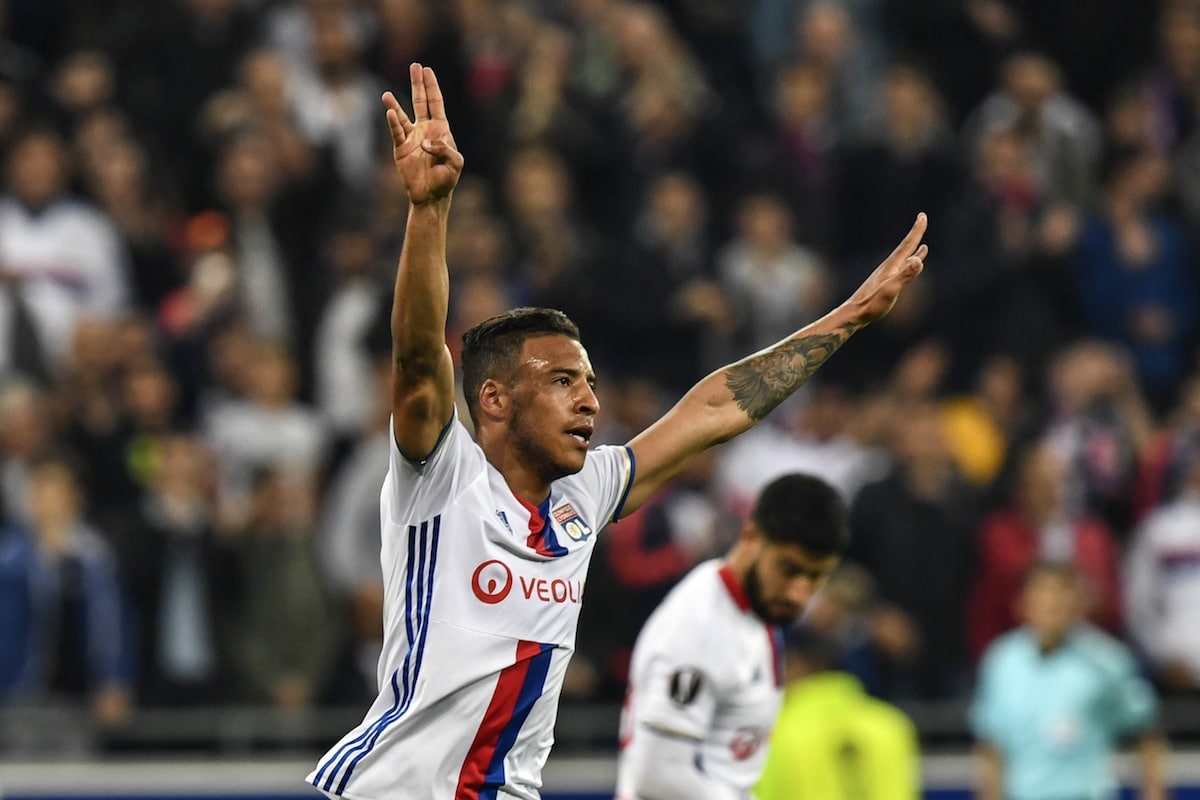 READ MORE: WHY ALEXANDRE LACAZETTE IS WORTH THE HYPE

Sometimes Wenger’s side miss a spark in the middle of the pitch, someone to offer a box-to-box threat and a player that can handle both the attacking and defensive side of the game.

Aaron Ramsey was supposed to be that type of player, but injuries have hampered the Welshman, and Frenchman Francis Coquelin and Mohamed Elneny don’t offer that same dynamism.

As N’Golo Kanté has shown for Chelsea, you need to be able to cover a lot of ground in the 3-4-3, but when in possession, you can’t just pass the ball to the attacking players, you need to have poise and creativity too.

Adding someone who can play at both ends will bring some unpredictability to the team.

This season, Wenger has used six players in the position, with Xhaka and Coquelin making 26 and 22 appearances respectively playing most often, and Tolisso is somewhat of a mixture of the two. 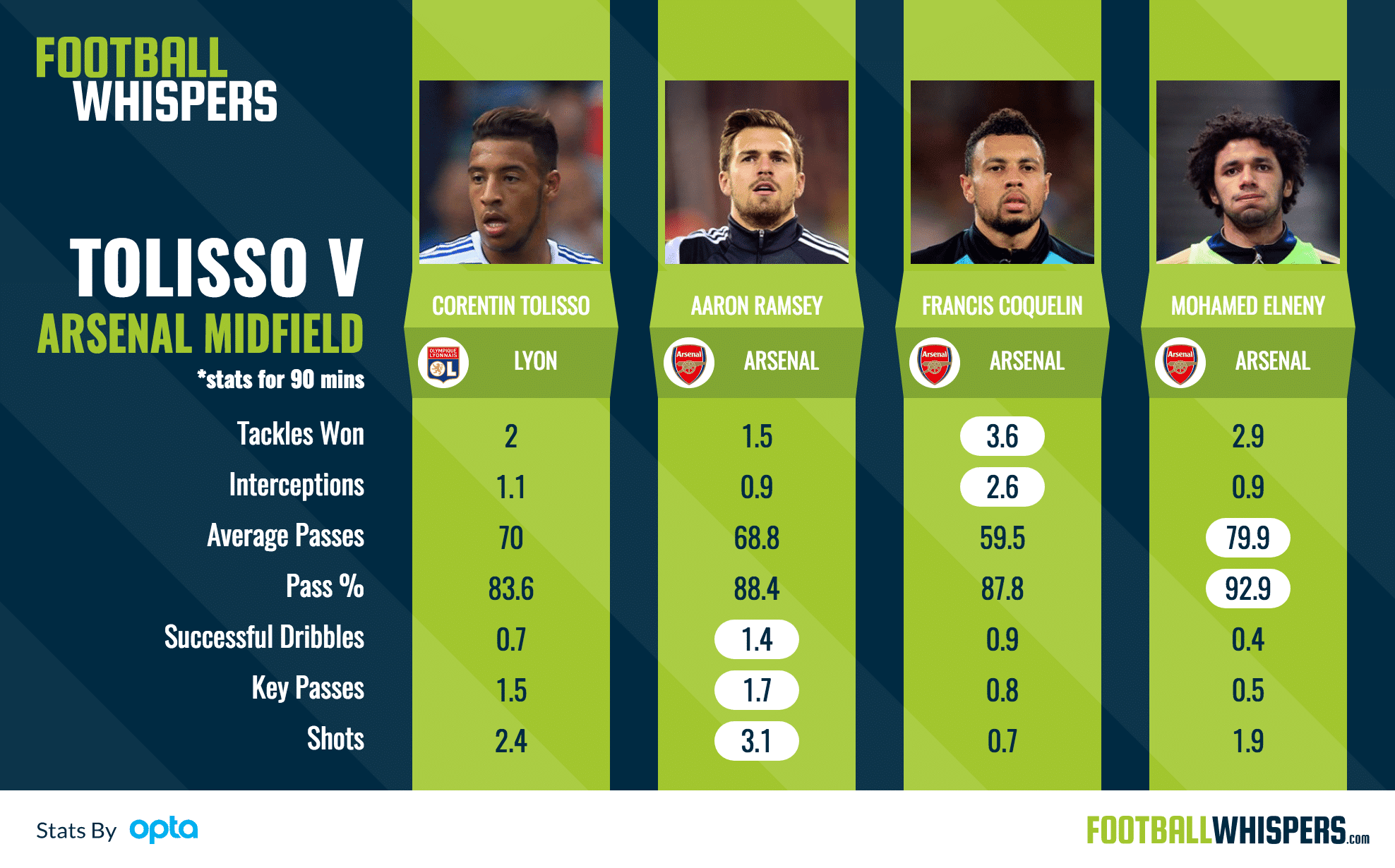 Coquelin wins more tackles and interceptions than Tolisso as you would expect, but the OL man is better on the ball and averages 0.7 more key passes than the former Lorient loanee.

It’s interesting that Tolisso completes fewer dribbles than his French counterpart, but picks a better pass — that is because he doesn’t need to run beyond the opposition with the ball, relying more on movement and short, sharp passes.

Tolisso becomes a bigger threat in the final third: able to shoot from distance, only Ramsey, another player he’d have to compete with, fires off more attempts. But the Lyon man is a better defender than the former Cardiff City youngster.

Room to grow and improve at Arsenal

Often when you are comparing players in similar positions, you have to factor in the teams they play in. Arsenal do see more of the ball than the Ligue 1 side, with 567.1 passes per 90 minutes compared to OL’s 522.

It’s not much, but those extra 38 short passes per 90 would give Tolisso more time on the ball. Also, add better players around him and more experienced defenders behind and you’d expect the 22-year-old’s numbers to grow again.

Also, with people like Alexis Sánchez, Theo Walcott and Olivier Giroud in the final third, his eye for a pass could de deadly at the Emirates.

Against AZ Alkmaar, after winning the ball on the halfway line, Tolisso takes no time to get the ball onto his left-foot — the ‘weaker’ of the two — and as you can see from the image below, the understanding he has with Lacazette sees the striker set off as soon as OL have possession. 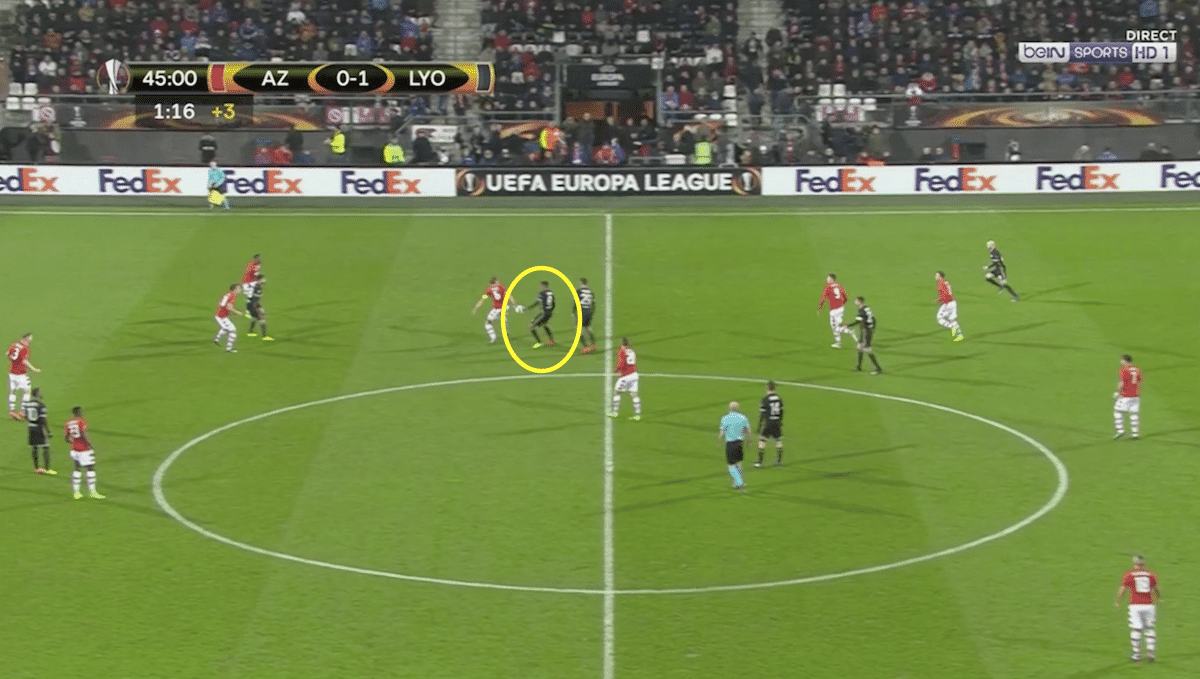 Tolisso plays the perfect ball and his team-mate is able to score their second away goal of the night. 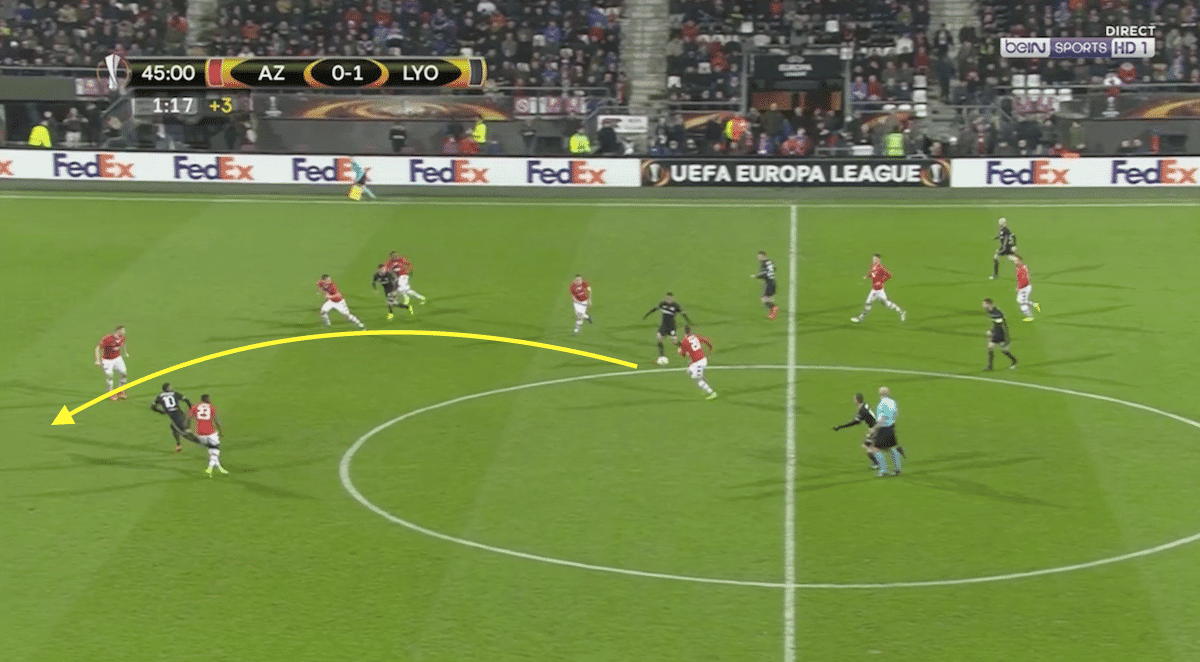 More than just a pass master 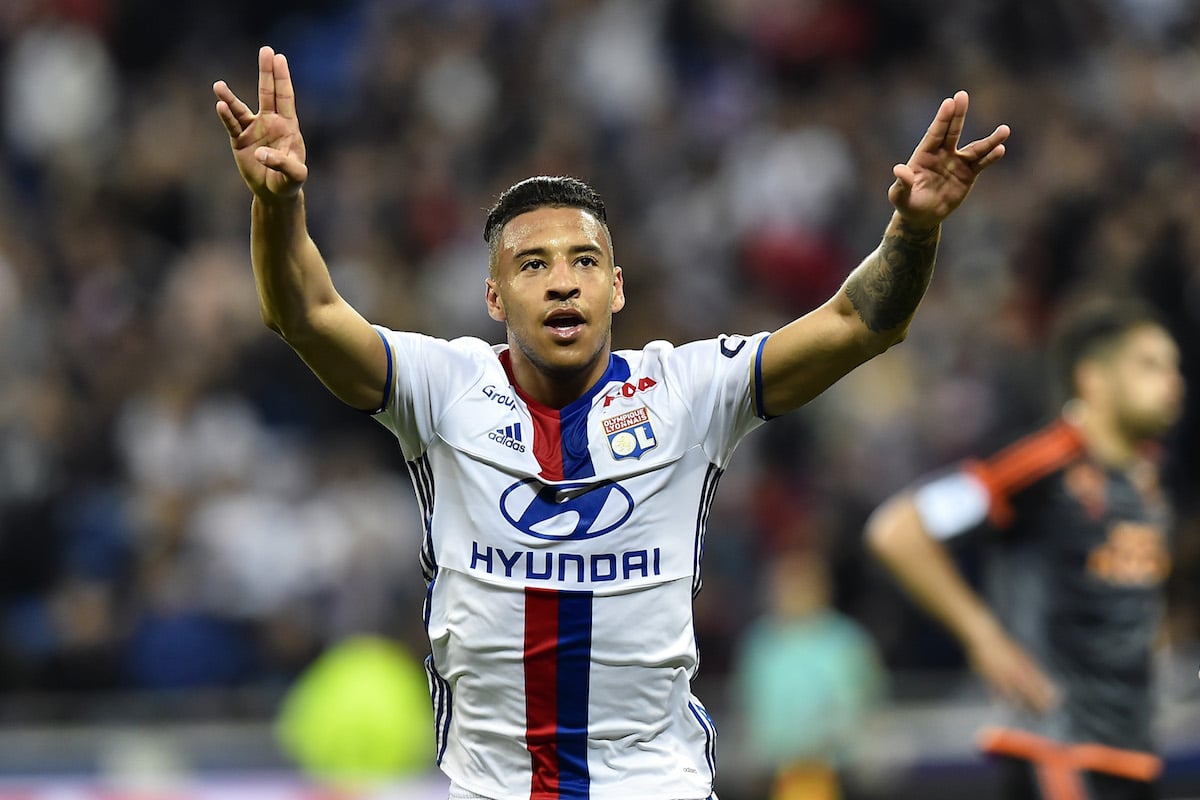 Due to his versatility and history of playing in a number of positions, Tolisso has shown he is able to create moments of magic from anywhere on the pitch. He has shown a very keen eye for goal and can find the net with both feet and with his head.

His first ever goal for Lyon was an injury-time winner against Bordeaux back in 2014. Tolisso rose above Les Girondins' backline to head in the winner as they came from behind to seal a 2-1 victory.

A triple threat with the ball at his feet, he’s very good at arriving in the box at the right time too.

Aulas has done a very good job at holding on to Lyon’s core youth prospects, but it seems he is reluctantly coming around to the idea that one or two may leave this summer. Tolisso’s excellent performances and growing reputation may make it very difficult to keep him at ParcOL beyond the current campaign.

“I am very attached to this club and I not feel like leaving at this stage,” he told the club’s website of his decision to stay last season. “I still have great things ahead of me with this club and look forward to having a great season.”

Lacazette, Memphis Depay and Fekir grab the headlines, but Tolisso is in the engine room making his team tick. If Arsenal’s interest is real, his contract until 2020 will mean that the Ligue 1 side will pick up over £30million for the midfielder.

Tolisso would be an ideal signing for the English club and as he continues to blossom and develop, there’s little doubt that he is good enough to improve the Gunners' midfield and make them a stronger, more incisive unit.

Tolisso is easily one of the best young midfielders in Europe, and if a move is possible, you can bet that Arsenal won’t be the only club ready to pounce this summer.