We may only be in September but Norwich City have already pulled off the shock of the 2019/20 Premier League season.

Daniel Farke’s men welcomed champions Manchester City to Carrow Road on Saturday evening and kicked the game off in the relegation zone.

They finished the weekend in 14th position after a famous 3-2 victory over Pep Guardiola’s side.

The Canaries have been lauded for their performance with Farke encouraging his side to stick to the style that helped then gain promotion last season. Against the high City press, Norwich played out from the back to great effect.

August player of the month Teemu Pukki continued his fine form by netting what turned out to be the winner. He also assisted the second Norwich goal scored by Todd Cantwell.

And it’s the 21-year-old old who is really catching the eye this season. Many tipped Pukki and Emiliano Buendía to be the players to watch for Farke’s side but it’s the England Under-21 international who continues to impress as an attacking midfielder.

Despite being just five games into the new campaign, Cantwell has already doubled his goal return from last season. He’s now netted against two of the three top-six sides he’s faced this season as well as adding two assists to take his goal involvement for the season to four in five.

For a youngster with relatively no experience – he made just 24 appearances in the Championship last term – the Norwich No.14 appears to have found his feet in the English top-flight with great ease. 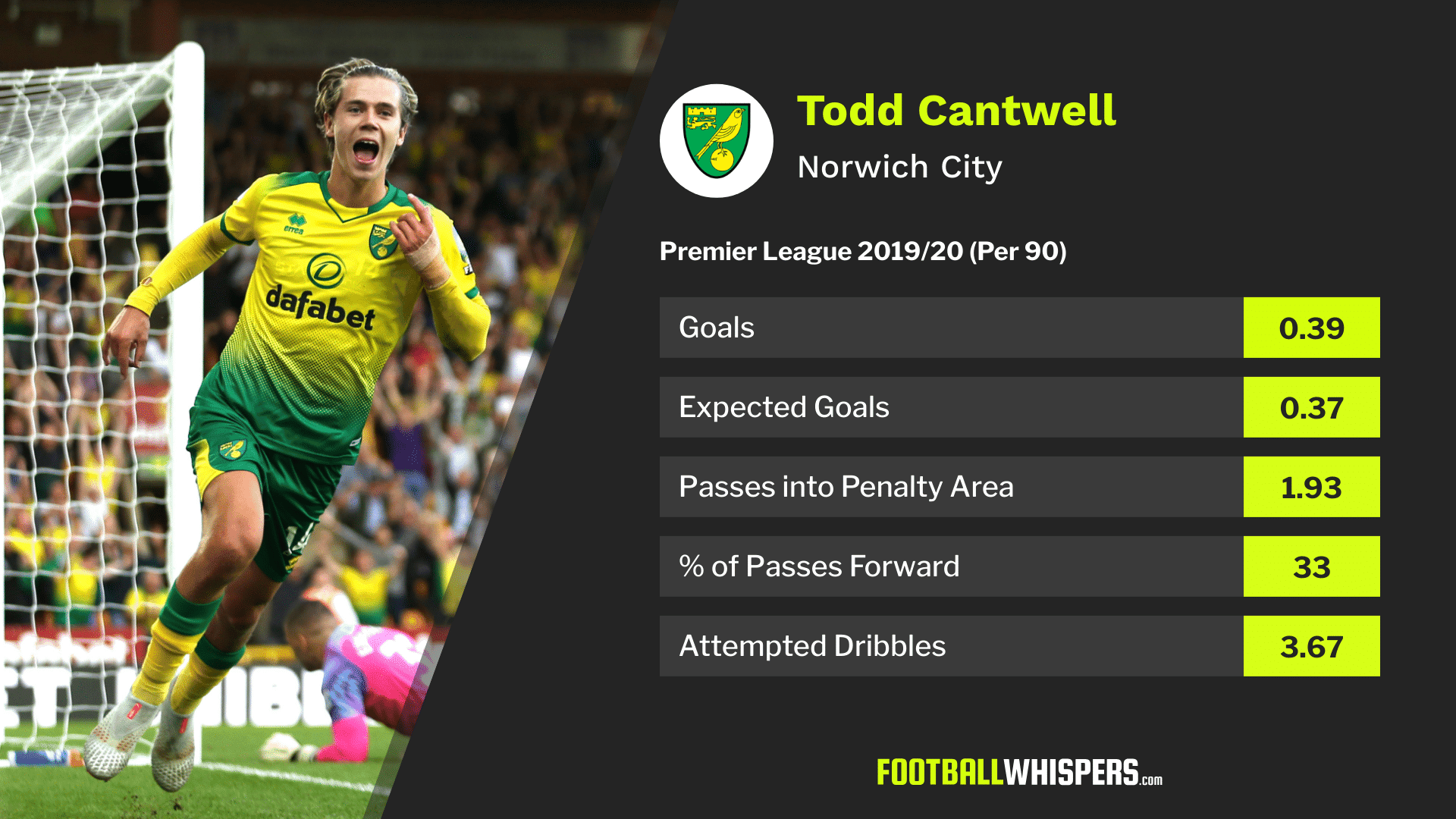 If his form continues, Gareth Southgate will struggle to overlook Cantwell and his performances when it comes to naming his squad for the October round of international fixtures.

And then the Premier League elite will inevitably come calling which, despite being a boyhood Norwich fan, would be a difficult proposition to turn down.

The youngster appears readymade for the top level.  Chris Sutton recently called him the ‘the Dereham Deco’ and though it’s a throwaway comment, Cantwell could develop into a leading playmaker for a top team.

Technically sound, he’s got a composure on the ball not historically associated with English players. At ease on both feet, he effortlessly dances his way out of tricky situations. Cantwell is press-resistant, too, an invaluable trait to have in the modern game.

He’s not as experienced as James Maddison but he could jump ahead of his former Norwich team-mate in the pecking order for England. Though many are vocal about why the Leicester City man should be starting for the Three Lions, Southgate has been reluctant to use him.

That could be because the 22-year-old is a not an archetype modern-day attacker. Maddison lacks explosive pace, is not a consistent goal threat and is not trusted to play in a midfield three. He is too specialist.

Cantwell, though the sample size is small, appears to have a role that is transferable. Deployed on the left of the Norwich attack, he’s adept at dropping into the midfield and carrying out the defensive side of the game. But he’s switched on enough to know he’s got to support Pukki in the final third.

He blends the different sides of the game effortlessly, something very few players are able to do.

The Canaries aren’t flooded in the middle third but still have enough firepower to not be reliant on Pukki. Cantwell’s expected goals per 90 average of 0.37 is impressive in isolation but it’s even more of a feat when you realise he’s managed it while coming up against Liverpool, Newcastle United, Chelsea, West Ham and Man City. He’s getting into good areas against high-quality teams.

Cantwell is threatening to be one of the breakout stars of the season. Regardless of what Norwich do in the top-flight this year, the 21-year-old could be calling the Premier League home for the next decade off the back of that he does during the campaign.