First, there was the to and fro with Southampton to sign him in 2015. That was a protracted wrangle which saw the Saints threaten legal action over the deal as they felt they had the first refusal on the Belgian following his season-long loan switch from Atlético Madrid.

The 2017/18 then season saw Alderweireld fall out of favour under Mauricio Pochettino, who preferred Davinson Sánchez and Jan Vertonghen at the heart of the defence.

That led to speculation Manchester United could come in for the commanding centre-half but Alderweireld fought his way back to make 50 appearances last season – more than any of his four years in North London.

Now, though, he could be on the move once more. Roma have made little secret of their interest in the 30-year-old whose contract is up next summer.

Former Spurs and Giallorossi sporting director Franco Baldini has held talks with the Premier League side with the man currently in the role in the Eternal City, Gianluca Petrachi, confirming as much.

“I was very clear in my press conference that Baldini needs to be a resource for me, but lately I heard too many rumours,” Petrachi told Sky in Italy.

“If I start talks with a club and realise that Baldini, for example, worked at Tottenham for many years and I have the chance to sign Alderweireld then it’s clear that I’ll take advantage of his qualities and his help, because we enjoy a good relationship and he can help us out and make us save some money.”

Roma need a centre-back after selling Kostas Manolas to Napoli earlier in the summer and the Giallorossi clearly see Alderweireld as the man to replace the Greek. But should Spurs let the classy Belgian leave North London?

Under the watchful eye of Daniel Levy, Spurs are famed for their transfer market nous. When they felt there was no value in the market they opted against signing anyone in two consecutive windows – unheard of in the boom and bust of the Premier League.

But they sprang back into action to complete the club-record signing of Tanguy Ndombele from Lyon for £55.42million at the start of July. At 22 the French powerhouse is a signing for the long-term. If Tottenham get their way, he won't be the last.

St. Étienne defender William Saliba, who had looked set to join rivals Arsenal until last week, has been subject of a £27million offer. At 18, Saliba could join Juan Foyth (21) and Sánchez (23) to form the backbone of Tottenham's defensive line for the next decade.

With his contract up in 12 months time and little progress as far as an extension is concerned, this will be Tottenham's final chance to get Alderweireld tied down to a new deal – assuming that is their intention.

If they do not agree to something before January the Ajax academy graduate can strike a pre-contract agreement with a club outside of England thanks to the Bosman ruling.

But would he be that great a loss? 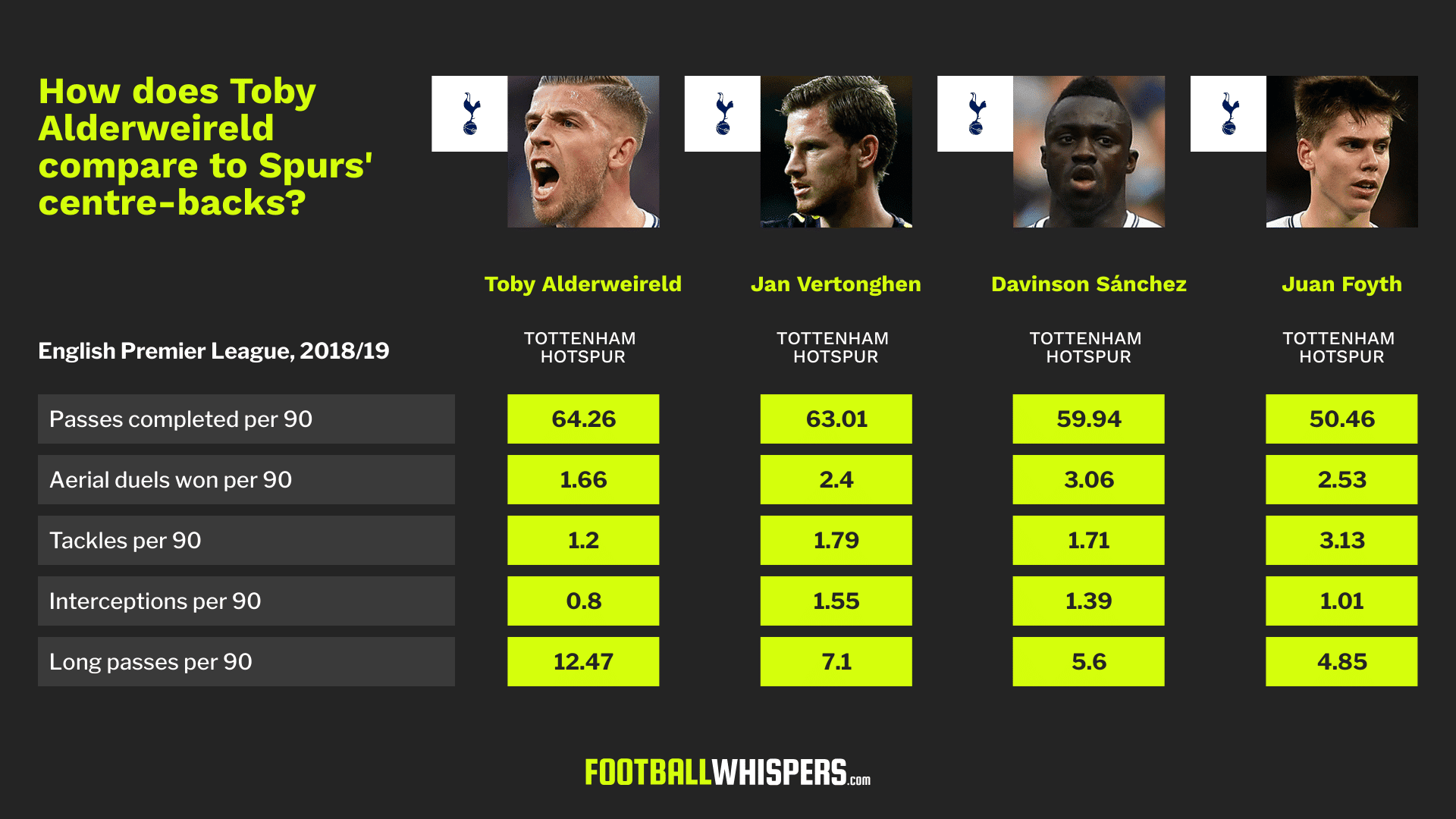 Comparing Alderweireld to Tottenham's three other senior central defenders last season, it's interesting to note he does not come out on top for any of the defensive metrics. Vertonghen, Sánchez and Foyth all registered more successful aerial duels, more tackles and more interceptions per 90 than the Belgian.

The one area where Alderweireld did come out on top was for completed passes, but only just. He pipped countryman Vertonghen by 1.25 per 90 and Sánchez by a little under five per 90 – fine margins.

For further context, we can take Alderweireld's stats for 2016/17 and compare them to 2018/19 – omitting 2017/18 campaign as he played just 14 times in the Premier League due to a combination of fitness problems and falling out of favour with Pochettino. 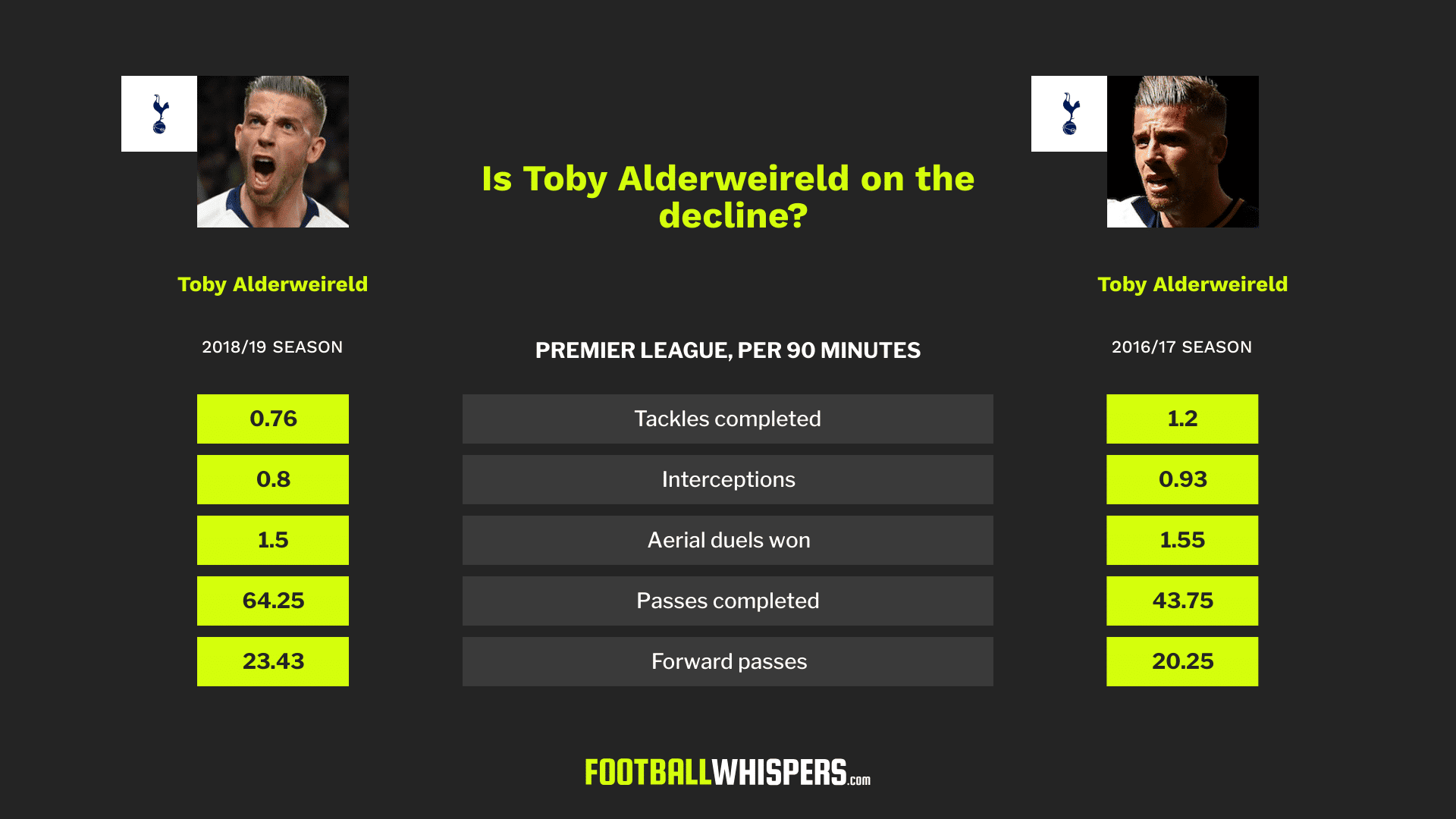 Immediately it becomes clear his defensive statistics have suffered while his use of the ball has improved. That could be due to Tottenham's improvement as a team in that period.

The North Londoners finished as Premier League runners-up to Chelsea in 2016/17 and their statistics for that campaign are far better than last which tallies with Alderweirld's drop-off.

For example, Pochettino's side conceded 12.21 shots per 90 last term compared to 9.18 two seasons ago. They also conceded 13 fewer goals (26 vs. 39) in 2016/17 than last season so it would stand to reason that Alderweireld's defensive metrics have suffered.

However, that does not explain why the Belgian came out so unfavourably against his defensive peers and that will be a concern for Pochettino.

Spurs have proven themselves masters of the transfer market in recent years and moving on players at the most opportune time is a big part of that – particularly if they could use it to leverage a deal for Roma's Nicolò Zaniolo.