Timo Werner and Liverpool FC could be a match made in heaven. The Reds have been linked with a move for the versatile forward for a number of years now but the summer of 2019 could see the Premier League leaders finally make their move.

Recent reports in Germany have claimed the Merseysiders have a serious interest in the 22-year-old and that a deal to see him swap Leipzig for Liverpool could be agreed for the end of the season.

Jürgen Klopp wanted to bolster his attacking ranks in the summer but after a deal for Nabil Fekir fell through only Xherdan Shaqiri arrived. While the Switzerland international has made quite the impact since the move, the Reds are still perhaps a little light in attack, an issue they've managed to paper over due to the front three not picking up any serious knocks as of yet.

While there are plenty of attacking talents throughout Europe, only a select few would suit Liverpool and their flexible forward line. Werner might just be the perfect signing for Liverpool. Here, we take a detailed look as to why this is the case.

Liverpool are in limbo. Klopp, Michael Edwards and the recruitment team at Anfield have done such a good job piecing together a squad capable of challenging Manchester City, a team considered by many to the best in Europe, for the title that the Reds now find themselves in a tricky situation in the transfer market.

The German tactician no longer has a first-choice XI, instead, it's a strong squad of 18 and he’s able to rotate as and when without there being that much of a negative impact on results or performances. It means any player coming in knows that they won’t be guaranteed anything.

This is where it gets tricky.

The world-class talents, the ones who could fit in seamlessly in with this squad, are going to want to be playing as regularly as possible, and being part of Klopp’s favoured 18 just isn’t going to be enough for them.

Those who are perhaps willing to take on such a role may be considered to be risks. Think Shaqiri, for example. The gamble on him paid off and he looks at home in this team but had he struggled Liverpool wouldn’t be out of pocket and they’d still have a functional player to call upon when required. 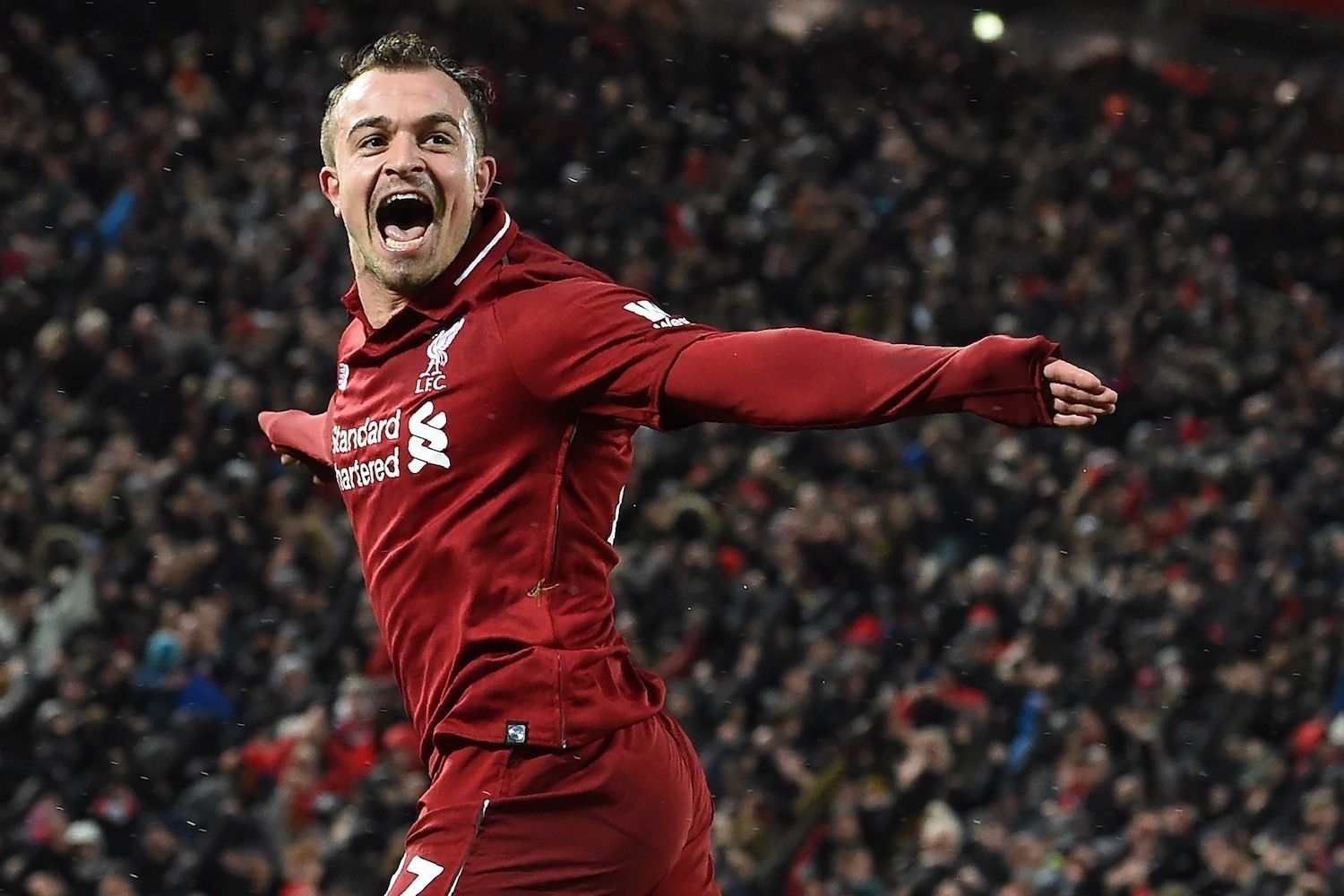 But with the Reds wanting to compete at the top table of European football on a regular basis, fewer gambles are needed.

There’s a balance to be struck and very few players tick all of the boxes. Werner is one of those who does.

He has just 18 months left on his current deal with RB Leipzig and recent reports have suggested he has no interest in extending his stay at the Red Bull Arena.

Speaking to Kicker, Oliver Mintzlaff, the CEO of the Germany club, revealed Werner would be sold in the summer at the very latest if a new deal isn’t in place.

“Logically, we have to know at the latest after the end of the season,

“Because, of course, a club like us cannot afford to go into the final year of Timo Werner's contract, as we have discussed with him and his advisor, as all parties have the same understanding.”

His contract situation means he’ll be available for a knockdown price. Even if he costs £40million, it’s cheap for a German international with over 200 appearances to his name already and he doesn’t turn 23 until March.

While Manchester United have been named as an interested party in the past, reports suggest it’s going to be a battle between the Reds and Bayern Munich. Many believe the Bundesliga champions aren’t going to let the national No.9 leave the league but RB Leipzig aren’t going to want to lose him to a rival.

Furthermore, there’s already a relationship between those on Merseyside and those in Leipzig following on from the deal to bring Keïta to the club. Liverpool bowed to the German’s every demand and you can’t help but feel that they did so to allow future trades between the clubs. 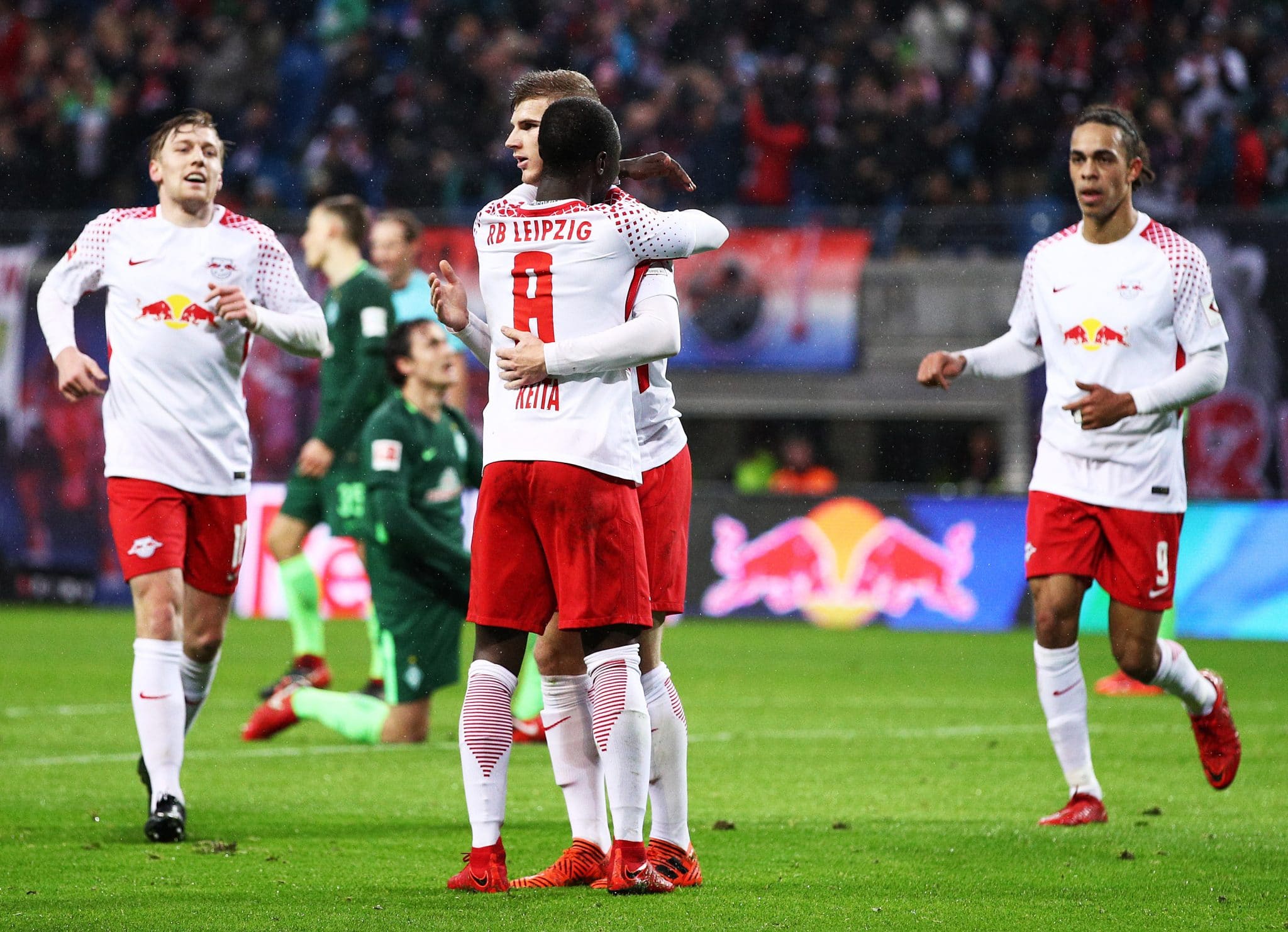 The temptation to lead the line for Germany’s biggest club may interest Werner but Bayern still have Robert Lewandowski and despite the prolific Poland international turning 30 this year he doesn’t look like he’s slowing down anytime soon. On top of that, the fact the club are going through something of a transitional period may play a part in shaping his decision.

There’s no guarantee Niko Kovac will be there beyond the summer after a disappointing start to life in Bavaria. Reports have suggested the club want to part with a large number of players and start from scratch meaning another bedding in period. Whereas at Liverpool everyone is on the same page.

Key players are being tied down to big money, long-term deals. The club are challenging for top honours and the team itself is the best Liverpool have had since the inception of the Premier League. Werner, Stuttgart born and bred just like the Liverpool boss, could be sold on the idea of linking up with Klopp.

He helped shaped the careers of Lewandowski, Mario Götze and Marco Reus. Interestingly enough, Werner was compared to the latter during his formative years before he made the move to centre-forward at RB Leipzig.

And why wouldn’t any attacker in world football be interested in playing under the manager who helped piece together, and develops, one of the most feared forward lines in Europe right now?

Liverpool's forward line has it all. It's got the creativity, the explosive pace, the work rate and the goals. But they are very much reliant on Sadio Mané, Roberto Firmino and Mohamed Salah being fit.

The problem Klopp used to have was that he didn't have a player who could play the Firmino role as the false-nine. But with Salah's move to No.9, that issue no longer exists. With the Brazilian now pulling the strings as an attacking midfielder for the most part, it's easier to find someone with a similar profile to fill that role. Shaqiri can play there. Keïta can do that job, too. Even Lallana if pushed. 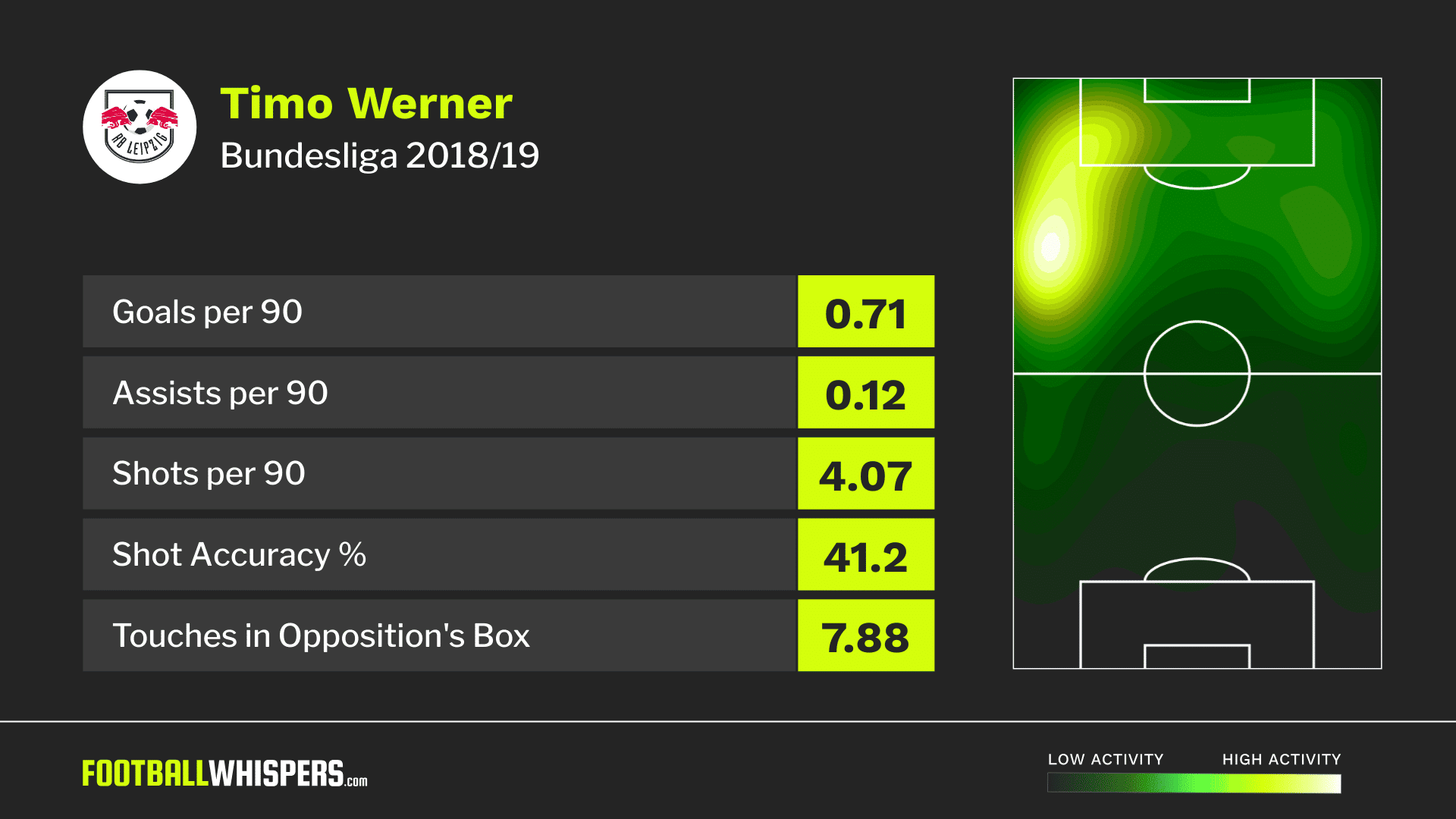 The headache Klopp now has is that the Reds don't have a player capable of leading the line in Salah's absence without the dynamic shifting. The No.11 allows Liverpool to play a more direct game due to his pace but his off the ball movement also brings others into play. Even when deployed as a centre-forward he starts on the right and cuts infield.

His positioning there allows Firmino, Mané and others from midfield to occupy areas in the middle. It's similar to what Werner does at RB Leipzig. Though he starts as a striker in a two-man attack, he more often than not peels away to the left.

There, he looks to isolate the full-back, blitz them with his pace and cut inside either having taken it on the outside or having drifted between the centre-back and the right-back. Essentially what Salah does but mirrored meaning he could fill in for the Egyptian as a No.9 but also play alongside him as a wide forward on the left.

What's interested here is even though he's spending a lot of his time in wide areas, he's still averaging close to eight touches in the opposition's penalty area per 90 minutes and a lot of his goals, as shown in the shot map below, come from central zones of the penalty area. 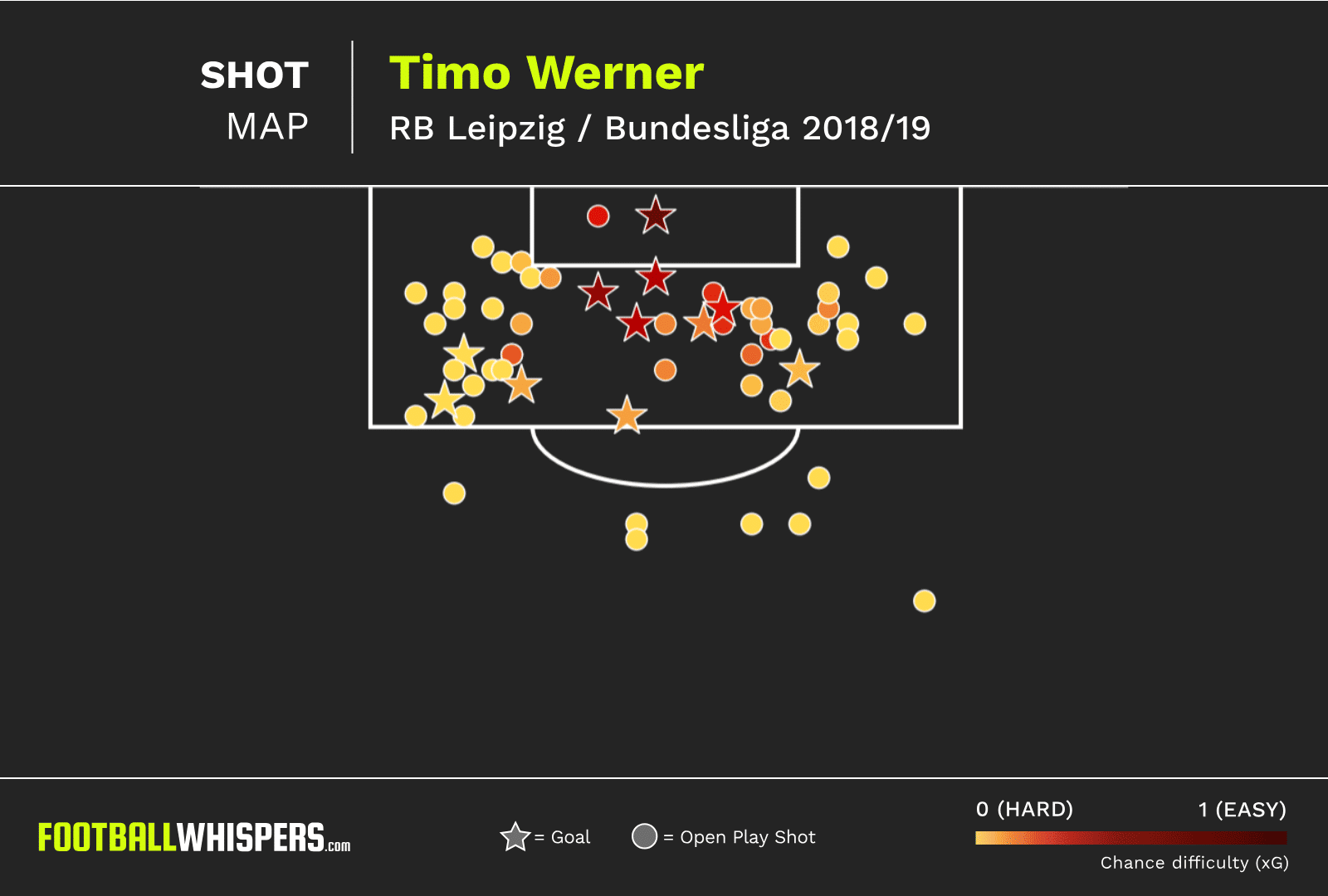 Werner is thriving as a forward but it's clear he's still got his wide forward habits. Not many teams in the world would be able to accommodate him as Liverpool would.

They're one of the few teams across Europe who are actually set-up to allow Werner to play his natural game without the attack being blunted by the lack of a natural forward. If anything, the Reds would probably encourage it.

The fact Werner played regularly out wide for Stuttgart has had a positive influence on him and his game. It's given him an extra dimension, a calmness in those wide areas where others might struggle when they're used to playing inside the penalty area, and he's now got tools other young forwards don't currently possess. 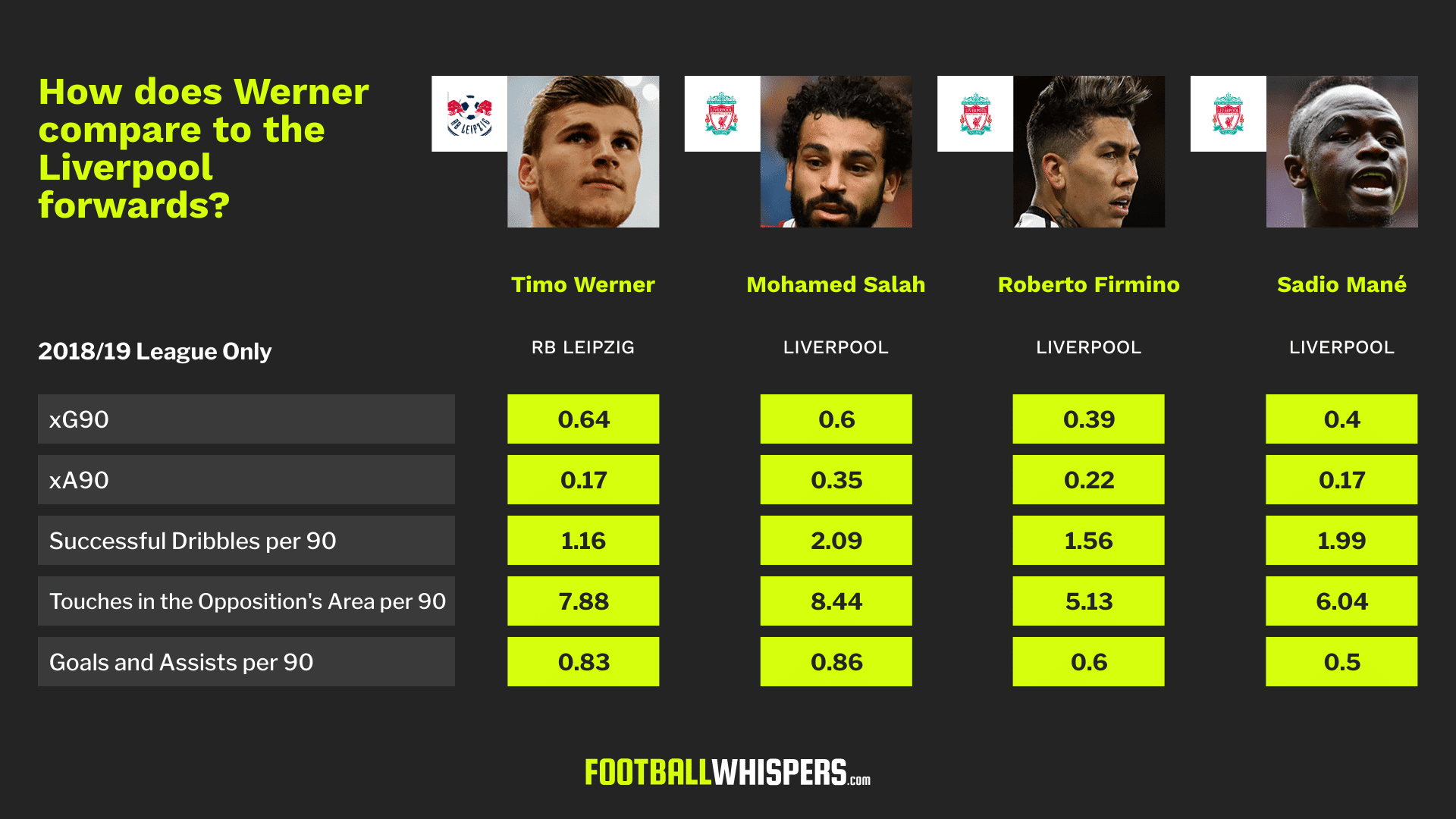 Not only could Werner play alongside and in place of Salah, but he could also do the same for Mané. The Liverpool No.10, when starting on the left, likes to cut inside. He can act as a playmaker but with Firmino there now he's been pushed forward a lot more. At times it's as though the Reds are playing in a diamond shape, something Klopp referenced a few weeks back.

That sort of role is one Werner could thrive in. It would also allow Mané to switch back to the right flank from time to time, too.

In terms of stats, the German leads the way for expected goals per 90 (xG90), just pipping Salah to top spot. He's created chances for team-mates, too, as shown by the expected assists per 90 stat (xA90). He doesn't complete as many dribbles but he has the tools to improve that part of his game.

On paper at least, he's the ideal forward for Klopp and this Liverpool team. Not only that, however, Merseyside might be the perfect place for Werner to hone his craft and flourish. Though he's already the leading man for Germany, he's far from the finished product. It could be the perfect marriage for all parties involved.