The goalscoring exploits of Robert Lewandowski and Erling Håland this season has meant others are somewhat going under the radar.

The Bayern Munich forward has scored in every Bundesliga game he’s appeared in this term, often on multiple occasions. Heading into the last international break of the year, the 31-year-old had 16 goals from just 11 appearances.

Håland has been rampant for Red Bull Salzburg, netting 16 times in 12 Austrian Bundesliga appearances to go with the seven goals he’s scored in four Champions League matches. The 19-year-old is the most in-demand teenager in Europe right now with countless clubs linked to him on a daily basis. One of which is RB Leipzig.

The German side have their own goal-machine in Timo Werner. The 23-year-old has struck 11 times and claimed four assists in 11 Bundesliga matches this season. He’s also chipped in with two goals from three Champions League starts.

He’s well on course to have his most prolific season to date – he struck 21 times in the German top-flight during the 2016/17 campaign – and he’s just five goals shy of his total for the 2018/19 season.

Yet despite his performances, the hype around Werner has taken a bit of a hit. Heading into the summer transfer window, there was a scramble for his signature with Liverpool, Manchester United, Real Madrid and Bayern all reportedly keen. However, in the space of a few months, the landscape has completely changed.

Real Madrid replenished their attacking arsenal during the summer and the Bavarian giants seem more than happy with their free-scoring No.9.

Despite Werner’s fine form for RB Leipzig under new manager Julian Nagelsmann, there’s talk the club will raid Red Bull Salzburg to sign Håland in what would be a massive coup.

But such a deal opens the door to Werner leaving the Red Bull Arena. Only a few months ago, the club seemed desperate to keep him with Bayern looking the likely destination for Germany’s leading forward. Now, a decent offer in January could see him leave if the two Red Bull clubs can strike a deal for Europe’s latest wonderkid.

Manchester United are believed to be interested in Håland and Werner, though the state they find themselves in doesn’t make Old Trafford the most attractive destination. Liverpool, on the other hand, are perpetually linked with the Stuttgart-born forward.

Their first reported interest dates back to 2017 and it now seems a bi-yearly event. In terms of playing profile, Werner does tick many of the boxes for the Reds.

For starters, he’s the right age. Werner has already made over 200 Bundesliga appearances but doesn’t turn 24 until March. The RB Leipzig man has the ability to impact games now for the reigning European champions but what will be of interest to Michael Edwards and the recruitment team is his potential to improve.

Similar in many ways to Mohamed Salah at Roma, Werner is scoring goals, lots of of them, alongside more of a traditional number nine in Yussuf Poulsen. It works well. But alongside Roberto Firmino, the possibilities are endless.

The space created by the Brazilian could see the German speedster do far more damage, just as Salah has since he arrived on Merseyside. 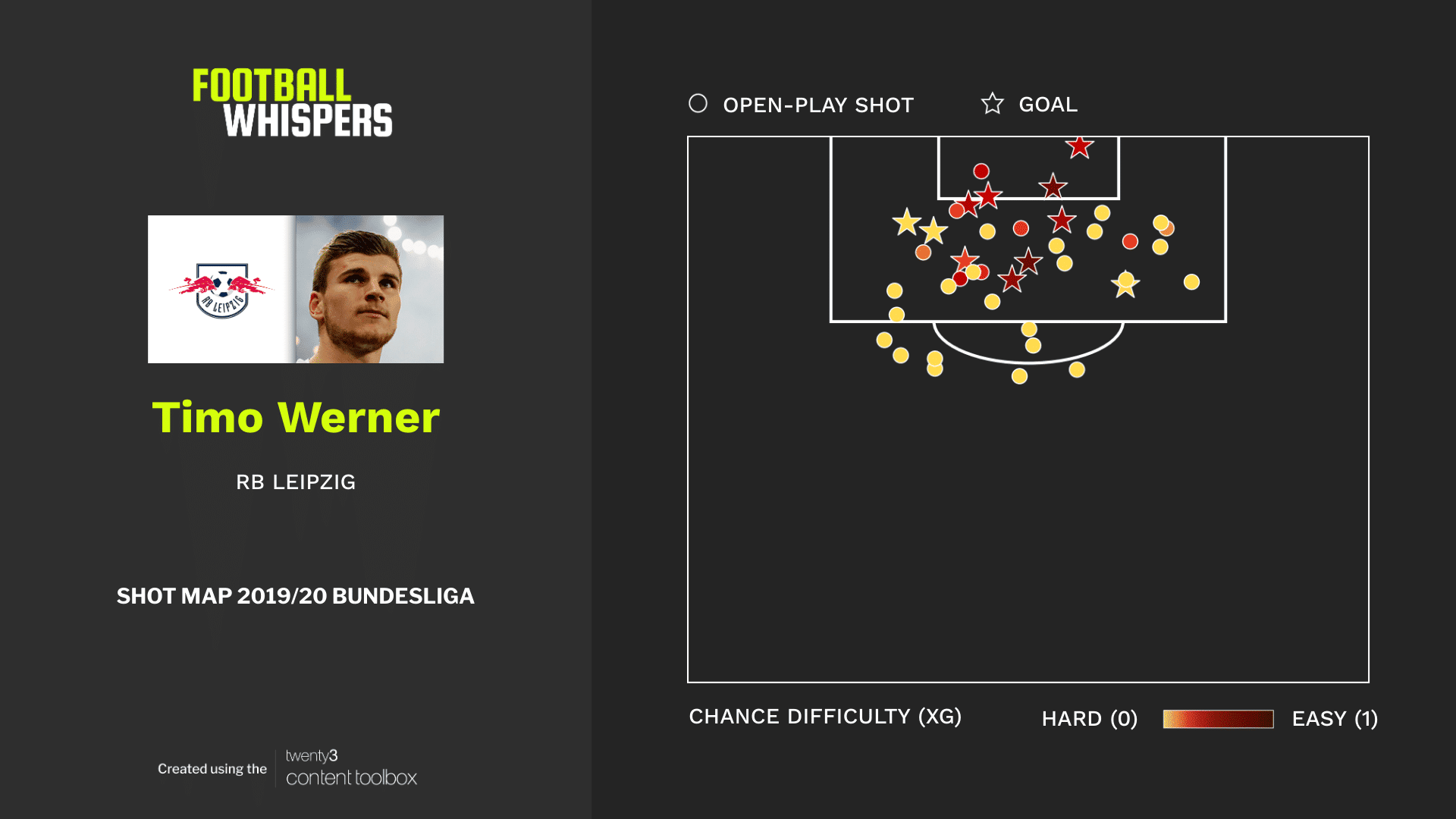 He's versatile, too. Werner started life as a left-winger for VfB Stuttgart but made the switch to centre forward upon signing for RB Leipzig. However, he's by no means like a traditional No.9.

Werner is often found in a wide left area, similar to that of Sadio Mané for Liverpool. He likes to isolate the opposition's right-back so when there's a turnover in possession he's able to angle his run between full-back and centre-back and get into dangerous positions. For the most part, it's what Salah does, only mirrored.

The one big question mark hanging over Werner was whether he could be as effective in a team that dominates possession. But it's the same question people levelled at Salah and Mané. Liverpool may dominate the ball but they also create plenty of transitional situations which then allow their explosive players to thrive.

But perhaps the biggest trait to work in Werner's favour is something he's highlighted this season. Nagelsmann, as a coach, is all about innovation. He likes to tweak the roles and demands on his players to help them become more rounded. He did it at Hoffenheim and he's doing it at RB Leipzig.

One beneficiary is the 23-year-old. In previous years, Werner could gravitate towards the left and if he wasn't able to use his pace he was a little too one-dimensional. Nagelsmann has started to use his No.11 more on the right this term. The switch has improved his link-up play and his overall goal threat. On the left, he'd look to cut in and shoot. On the right, he's assisting more for his team-mates.

So far this term, his assists per 90 have risen from 0.25 last season to 0.40. His expected assists are also up to 0.36 from 0.17. Werner is averaging fewer touches in the penalty area but he's scoring more goals, chipping in with more assists and both his shot and pass accuracy are up.

This version of Werner has much more to his game and it's much easier to envisage him in this Liverpool team than it was last season. With all eyes on Håland, the Premier League leaders could land themselves what could be a potential bargain.