“We've got players who have been close to the first team who have had opportunities today and probably not taken them as well as they could do.”

That was the typically honest assessment of Watford head coach Nigel Pearson after his side blew a 3-0 lead to draw at home to League One strugglers Tranmere Rovers in the FA Cup third round at the start of the month.

Striker Andre Gray was one of a handful of senior players given the nod from the start in that tie. But the club's one-time record signing failed to grab the chance. Miserably so.

Up against a third-tier defence, which had conceded 43 goals in 24 games prior to their trip to Vicarage Road, Gray barely had a sniff. In fact, he completed just seven passes in 90 minutes, had a solitary touch in the penalty area and did not attempt a single shot of his own.

In mitigation, he did set up Roberto Pereyra's 34th-minute strike, although it was more a case of turning into traffic and the Argentine lashing home the loose ball than it was picking his team-mate's run out. Since then the 28-year-old has accrued just ten more minutes in the Premier League. 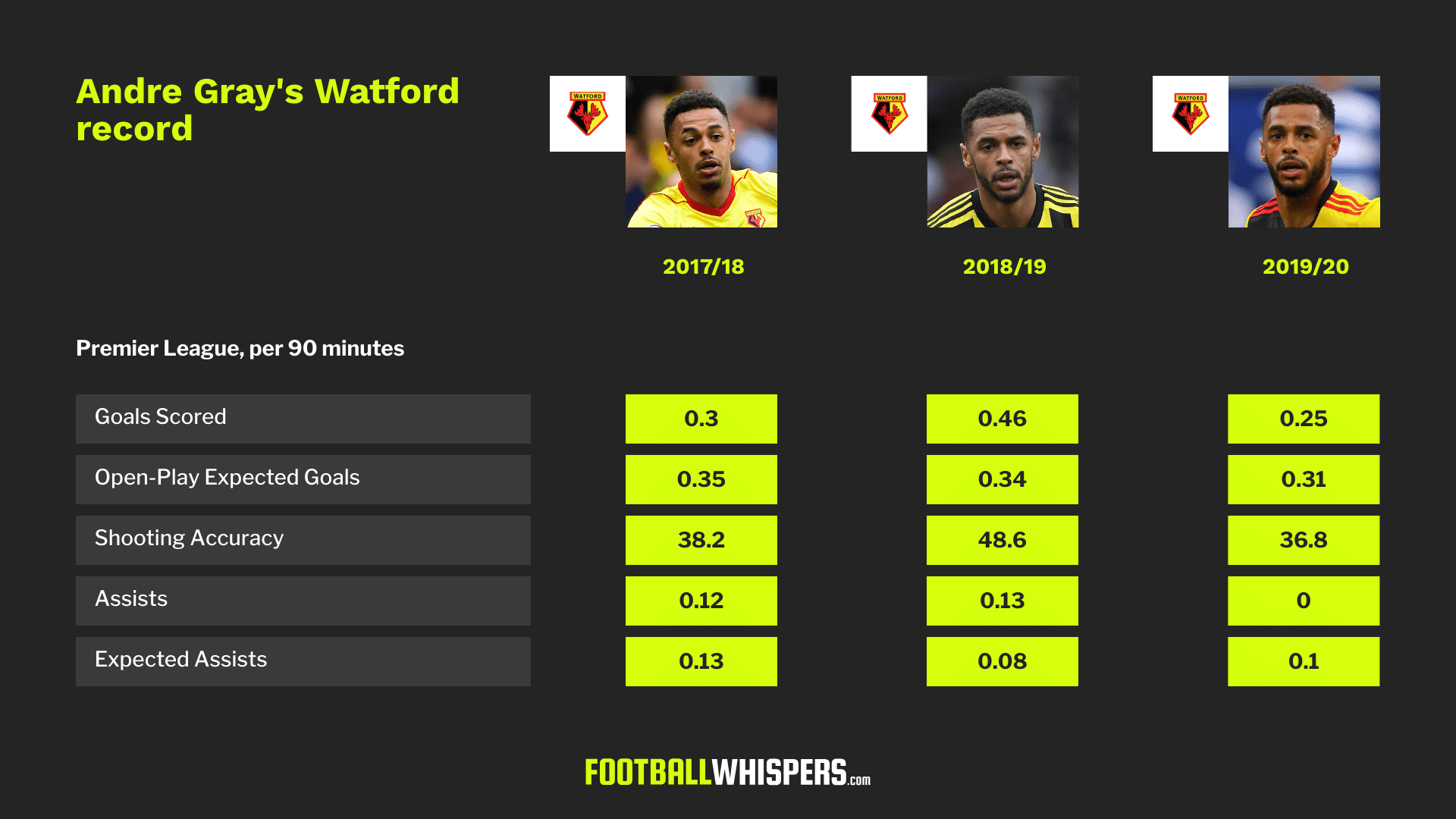 According to reports, Championship promotion hopefuls Leeds United were keen to take the former Burnley striker at a knockdown £2million – a significant hit on the £18million paid for the forward three summers ago. The stumbling block was though to be Gray's £80,000-a-week wages.

However, speaking to The Athletic's Ornstein & Chapman podcast, Leeds reporter Phil Hay claimed the Hornets have ‘softened their stance' on Gray in a bid to get him off the books this month and could now be open to a loan switch instead.

“They’ve enquired about Andre Gray down at Watford, they were initially told no about him, but Watford have now softened their stance and I think they’re now open to loan offers for him,” Hay told Ornstein & Chapman.

Certainly Gray did not do his chances much good in Tuesday's galling defeat at fellow relegation battlers Aston Villa. In a nine-minute cameo, the Wolverhampton native never got to grips with Villa's centre-back pairing of Tyrone Mings and Ezri Konsa and wasted a gilt-edged chance to set Gerard Deulofeu through (below). 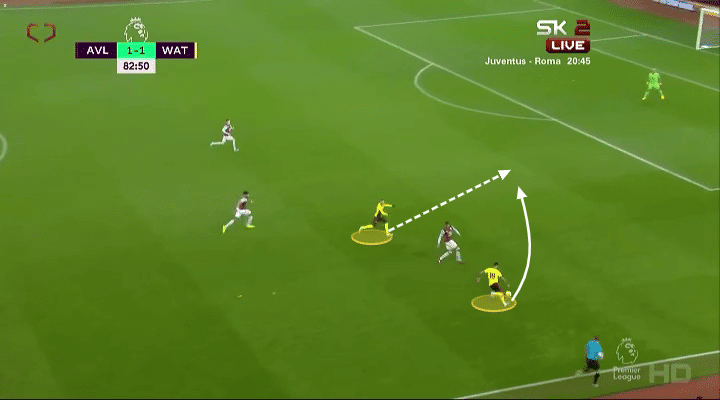 Gray has usually been more effective stepping off the bench for the Hornets than starting games. He scored nine times in all competitions last season, notching three off the bench in spring to secure wins over Crystal Palace, Leicester City and Everton. By no means lightning-quick, his pace in behind stretches tired defences and made him a useful asset in tight games.

Forty-three of his 79 Premier League appearances for Watford have come off the bench, meaning a record of 16 top-flight goals in 3,567 minutes equates to 39 games, just over a full season, and 0.4 goals per 90. By no means a bad record.

However, he has rarely impressed as a starter. His first touch is remarkably poor for a professional footballer – albeit one who made it to the full-time ranks relatively late in his career – while his hold-up play is only marginally better.

There have been mitigating circumstances. Gray wasn't Marco Silva's choice when he arrived at Vicarage Road in the summer of 2017 and finished his maiden season with just five goals. Equally, the number of times he has been deployed as a lone forward haven't helped. His best displays have come when as part of a two with Troy Deeney typically the striker he thrives alongside.

But with Pearson favouring a 4-2-3-1 shape, there is no room for Gray. The arrival of João Pedro from Fluminense and the return to fitness of Danny Welbeck, only serve to push the former Luton Town striker down the pecking order.

Leeds are not the only interested party. Reports claim Nottingham Forest are also keen on Gray. A move to the Championship, where he has 43 goals in 92 appearances, could be just what he needs to kickstart his career.

For Watford fans there's no longer any shade of grey to the debate. It's black and white: Andre Gray isn't cut out for the Premier League anymore.