Newcastle United are crying out for a striker, there’s no doubt about it.

They have scored just 22 goals in their opening 24 Premier League matches.

Only two players have more than two league goals this season – Joselu has four and Dwight Gayle has three.

The Spaniard was the Magpies’ main summer arrival up front, but a return of four goals in 21 league games is hardly inspiring.

Yet perhaps his lack of goals is no real surprise considering he only cost £5million from Stoke City in the summer.

There were a number of Championship strikers who cost more than him in the summer, with Middlesbrough signing Martin Braithwaite for £9million as well as bringing in Britt Assombalonga for £15million.

Jordan Rhodes’ permanent move to Sheffield Wednesday cost around £10million, while Fulham signed Rui Fonte for £8million – all very big fees for players in England’s second tier, and more than the Magpies were able to spend.

Joselu’s best goalscoring season was at Eintracht Frankfurt in 2013/14 where he scored nine goals in 24 Bundesliga games, working out at 14 in 33 in all competitions.

After his move to Stoke in 2015, his one season with the Potters before being shipped out on loan saw him get four goals in 22 Premier League games – four in 27 in all competitions.

When there are strikers going for £15million in the second division, if a team is buying one for the top-flight for just £5million, they can’t expect to be getting a prolific one, and that is the case with Joselu.

It’s not like Rafa Benítez didn’t see the problem coming.

“If you see the squad, it’s obvious that we need a striker. We needed to bring some players in some positions to have competition,” he said last summer before Joselu’s arrival.

“Dwight [Gayle] was doing really well last year. But it’s another level and we have to see if he can replicate something similar in the Premier League. We need competition in each position.

“Not just because they will be better, but we need bodies. You have to be sure that you have enough quality to keep the level.”

Yet, he now has Joselu and will have to make use with his front line until January at least.

Benítez started the season playing with one up front, but also tested out a 4-4-2 more recently, which saw Gayle play alongside Joselu.

“We have to understand that in these sort of games we have to do better,” said Benítez after the Bournemouth game, where they lost 1-0.

“We have created chances in every game, you have to score. We have to keep going, we are Newcastle United, a good team that has been promoted.”

And he was right, they’ve been creating chances, they just haven’t been taking them – their expected goals (xG) is at 24.91 so far this season, above their 22 goals. 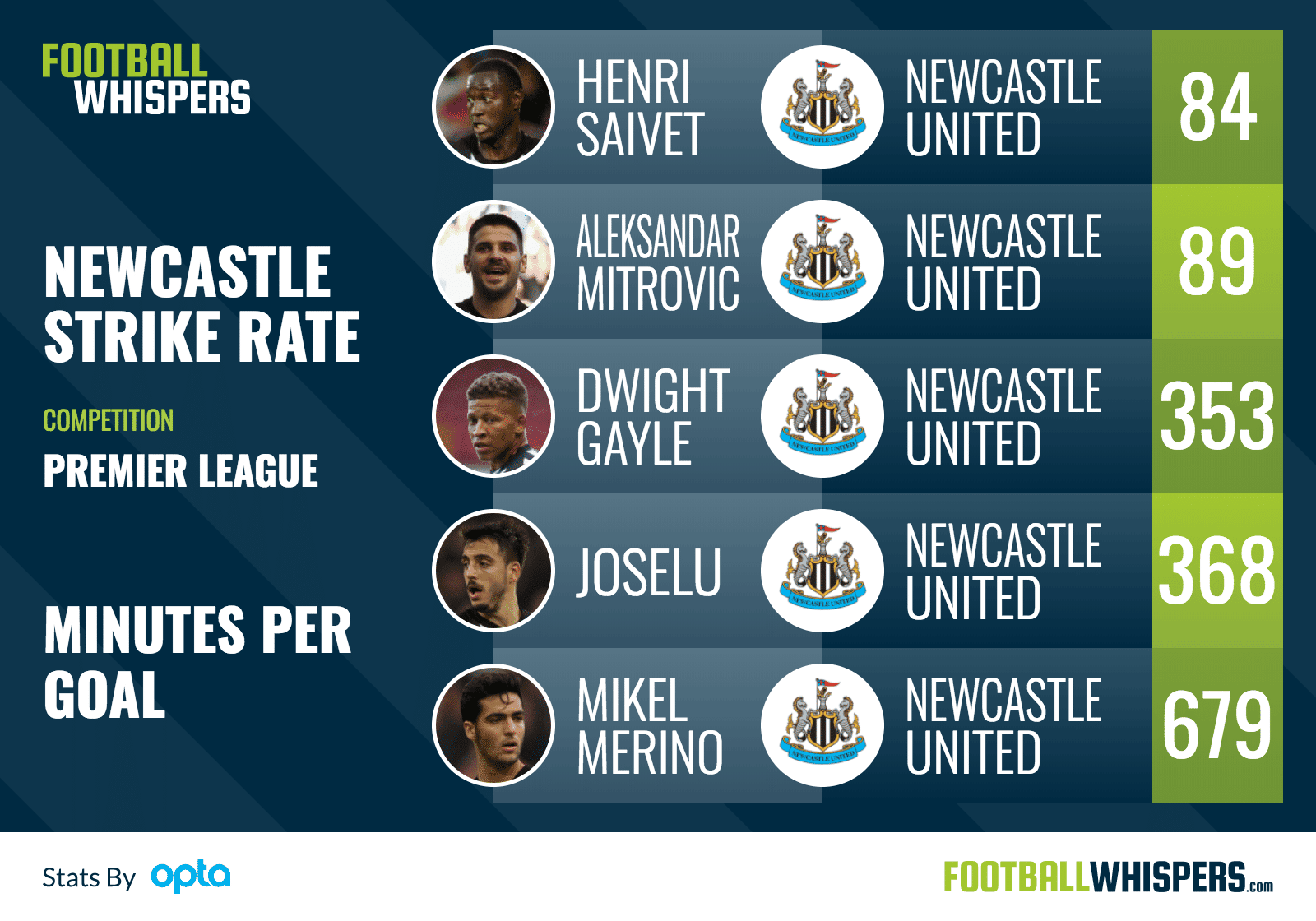 With the transfer window in full swing and no real money spent, Benitez may have to make do with what he’s got and perhaps it is time to give Aleksandar Mitrović a proper shot this season.

Indeed with him on the bench against Bournemouth, there were calls from the home crowd for the Serbian’s introduction, but Benítez resisted them, instead sending on Ayoze Pérez.

After the game, he explained that decision, saying: “I thought Ayoze could give us some good movements. They are different kinds of player, different movements.”

Yet that game time, or lack of it, makes it is clear Benítez doesn’t trust the Serbian, perhaps because of his disciplinary record.

The striker arrived at Newcastle United claiming he wanted to play like Alan Shearer, but 22 seconds into his debut he was booked and 20 days later, he was sent off in the 15th minute of a 1-0 home defeat to Arsenal for a foul on Francis Coquelin.

That side was nothing new though, despite scoring 44 goals in his two seasons at Anderlecht, he also picked up two red cards and 19 yellows.

And the problem is for Benítez is already this season he's shown his disciplinary problems, elbowing Manuel Lanzini and receiving a retrospective three-match ban.

With Newcastle under the Spaniard being a team that is predominantly hard to beat, the Spaniard clearly doesn’t want to take the risk of going a man down, and Mitrović is a loose cannon.

Yet, if the Magpies can’t score, they’ll be even easier to beat than if they were a goal up.

The Serbian scored nine goals in Newcastle’s relegation season in 2015/16, with only Georginio Wijnaldum managing more.

He’s proved himself in the Premier League more than Gayle or Joselu have and deserves a chance, but Benítez will have to come round to thinking that the risk of him losing his head is worth it for what he will bring in front of goal.

Newcastle’s boss clearly doesn’t believe that yet, but the longer the Magpies’ strikers struggle, the greater the case for playing Mitrović will become.

He is thought to be a Brighton and Hove Albion transfer target, but Newcastle won't sell until they bring in another striker. But perhaps the answer to their forward woes is already at the club.