“If you want to a win a game away of [sic] home in the best league in the world your goalkeeper can't concede two goals like I did today . . . it's simply not possible . . . the team fought back but the damage was done.” That was the candid verdict of Arsenal goalkeeper Petr Čech following Sunday's 2-1 defeat at Brighton & Hove Albion.

At a time when many inside the Emirates Stadium can be accused of burying their heads in the sand, Čech's tweet showed a great deal of self-awareness and acknowledged his shortcomings. His paymasters might like to take note.

That humbling at the hands of the Seagulls means it is now four defeats in a row for the Gunners for the first time under Arsène Wenger. Few would have expected anything more from back-to-back fixtures against Manchester City. But top-flight rookies Brighton? This was a new low – for Arsenal and Čech.

When the Czech Republic international swapped Chelsea for Arsenal in the summer of 2015 he did so with the Blues' blessing; as a reward for 11 incredible years with the West Londoners.

Allowing the Plzen native to join a Premier League and – at the time – top-four rival was a nod to his sterling service at Stamford Bridge, where he had become the Premier League's best goalkeeper, overcome a career-threatening skull injury and returned as strong as ever before Thibaut Courtois finally succeeded him.

But no more. Two short of his 100th Premier League outing in Arsenal colours and one short of his 200th top-flight clean sheet, the 35-year-old's time as the Gunners' No.1 is coming to an end quicker than his manager's.

Both goals at the AmEx Stadium on Sunday afternoon were preventable. The first, a routine corner to the back post by Pascal Groß, saw Čech beaten to the ball by Shane Duffy, allowing Lewis Dunk to stuff home the loose ball. The second made even worse viewing as Groß looped an inviting delivery to the far side of the six-yard box for Glenn Murray to send a header squirming under the beleaguered stopper.

Former Arsenal midfielder-turned-pundit Paul Merson was among those calling for Čech's head even before Sunday's debacle in Sussex. “They need a goalkeeper. Petr Čech was great, but he’s not great anymore,” he told Sky Sports.

In 2015/16, Čech's first season at the club, the Gunners shipped 36 Premier League goals as they finished runners-up to Leicester City. Last term Wenger's side were breached 44 times and this season they have conceded 41 goals already, meaning they're on course to reach 53.7 – Arsenal have never let in that many under Wenger or in the Premier League era.

It's too simple to blame Čech alone for that record – he has a strong supporting cast in front of him to thank in part for that dire forecast – but he has to accept a large share of the blame. 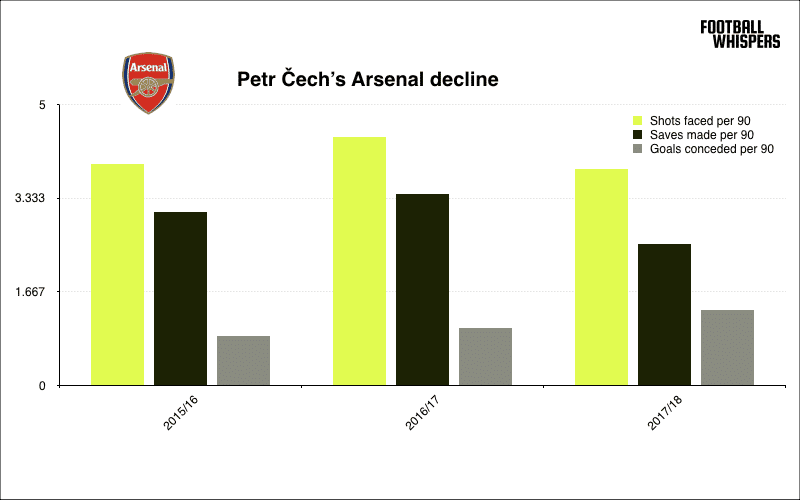 The graph above comprises Čech's statistics for his three seasons at Arsenal. This term the Gunners are facing fewer shots per 90 (3.85) than either of the last two seasons. Despite that, the former Czech Republic captain is now conceding at a higher rate per 90 (1.34) than in either 2015/16 or 2016/17.

To understand that better we can look at Arsenal's team xGA (expected goals against).

According to Understat, the North Londoners should have been breached on 37.91 occasions this season. They actually conceded 41. In other words, they're just over three goals worse off than they ought to be at this stage.

Interestingly, per Squawka, Wenger's side have committed the most defensive errors (27) this season, with 13 leading to a goal conceded – also an unwelcome Premier League high.

Despite those damning statistics, Čech has been handed a stay of execution as his deputy, David Ospina, has never fully convinced at the Emirates Stadium – not least in his audition for the No.1 jersey at Wembley a fortnight ago.

And, much like his besieged manager, the former Chelsea great appears to have been allowed to go on too long. Things must change in the dugout and in the Arsenal goal this summer.