Whoever takes the Everton job permanently won’t have it easy. They’ll be taking over a team low in confidence with just three league wins from 11 games.

The Toffees' dramatic 4-2 win over Watford on Sunday was their first victory in nine games, and they only managed to just hold on after former player Tom Cleverley missed a late penalty.

It’s not just that they’re lacking confidence though. After a big summer spending spree the Toffees’ squad is woefully unbalanced. They have far too many No.10s and no real replacement for  with Sandro Ramírez failing to properly address the Belgian following his departure to Manchester United in the summer.

There will be a number of big jobs for them to deal with, but high on the list will be sorting out the Kevin Mirallas situation.

The Belgian winger has played just 74 minutes of Premier League football this season – he did not start a league game prior to Ronald Koeman's sacking – and is making noises about a possible departure from Goodison Park in January.

According to the Liverpool Echo he is prepared to push for a move away from Goodison Park in January but wants to wait until Koeman’s permanent successor is named before making up his mind.

When you’re in a relegation fight, you need players who are 100 per cent behind the cause and that doesn’t seem to be the case with Mirallas.

Both he and Morgan Schneiderlin were left out of the squad for that victory over Watford after clashing with first-team coach Duncan Ferguson prior to the game.

According to the Guardian, he accused the pair of a lack of commitment.and told them they should go back inside if they were not prepared to take the session seriously, an offer which they took up and walked off.

That’s a claim both have denied, with Mirallas writing on Instagram: “I have to restore the truth after some articles in the media.

“I was not excluded from the squad due to a lack of commitment during training, this was a managerial decision and I was frustrated as I’ve been fully committed to Everton since arriving in 2012 and I can’t accept our actual ranking.

“I apologise to the president and owner, my team-mates and the manager for not being able to cope at that moment with my frustration.”

While he says he is fully committed, considering his future dependent on the new manager suggests the Belgian isn't as concrete on that as he suggests.

What’s more, the 30-year-old is hardly going to come out and admit he isn’t giving 100 per cent.

And it’s not the first time his attitude has been questioned.

In August, Koeman discussed the forward not being part of the first team, saying: “He was out because he is struggling to deal with moments in the season and was disappointed.

“Everybody can be disappointed. But I expect from everybody to be part of the team.

“If somebody is showing that he is disappointed and his attitude is not the same then I have to make a decision.”

And with Mirallas playing less than 90 Premier League minutes under both Koeman and caretaker boss David Unsworth, it’s clear he’s out of favour and that can’t solely be down to ability, with Everton crying out for wingers. 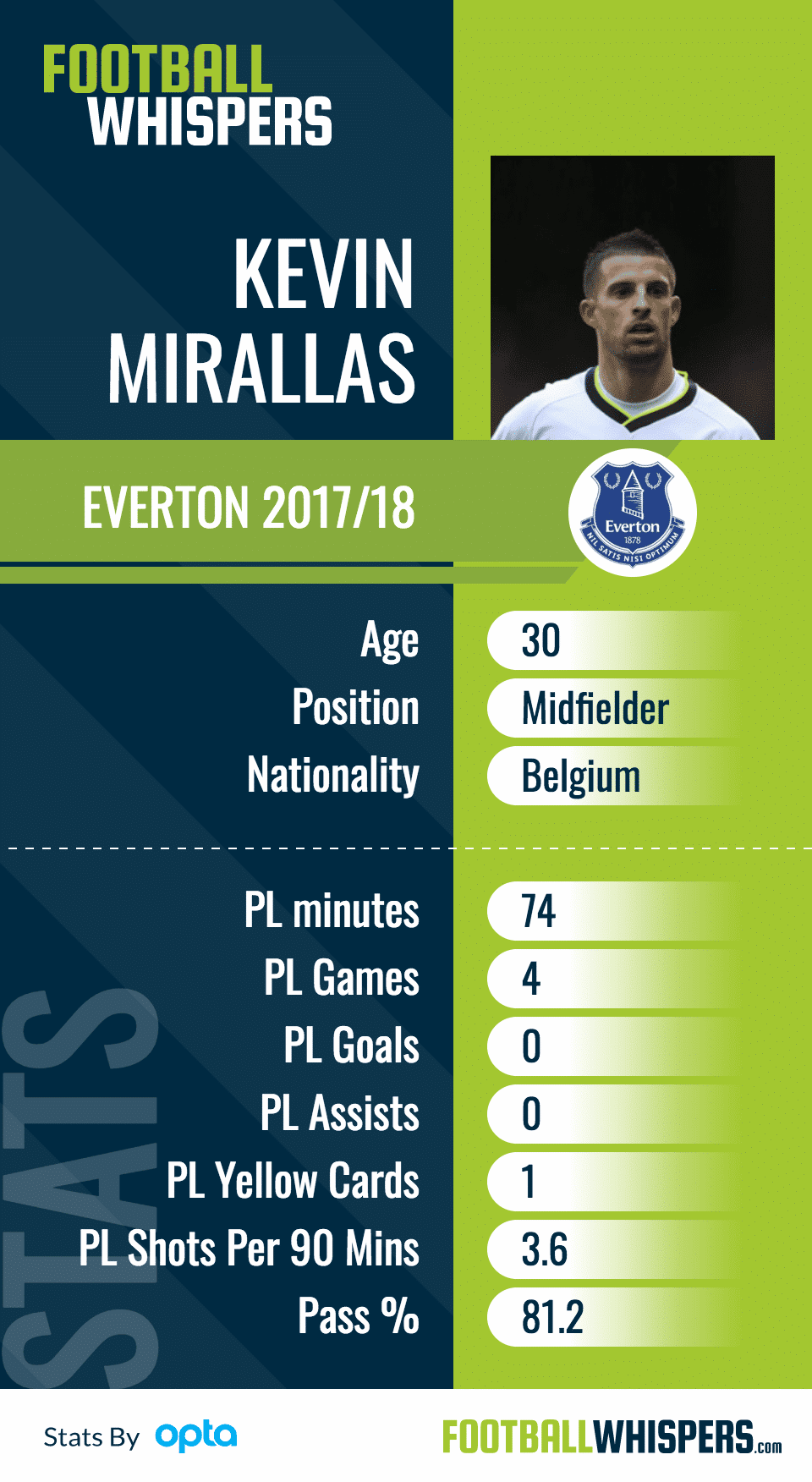 Time to move on

Mirallas is out of favour and clearly not being too keen on staying at Everton – as well as the training ground incident, he tried to force a move through to Olympiakos in January.

Speaking after the transfer window closed and a move to his old club collapsed, he said: “I really wanted to join Olympiakos. We did our best to reach an agreement that would suit everyone.

“Especially their chairman, Vangelis Marinakis, who did everything possible and even went beyond that. But Everton turned a deaf ear to them.”

And the first job of a new boss is to get rid of the bad apples, or players who don’t want to be there, and after clearly falling out with the last two people to take charge at Goodison, it’s surely time to move Mirallas on.

While Everton desperately need wingers and an injection of pace, with Yannick Bolasie coming back from injury that position will definitely be strengthened in the coming weeks.

Mirallas is also not performing at the level he was for Everton. In his first three seasons with the Blues, he scored nine, eight and 11 goals respectively.

The following campaigns saw him score six then four, before registering none so far this campaign, albeit with limited game time in 2017/18.

The Belgian is now 30 and is unlikely to rediscover that form from the peak years of his career.

He’s been at Everton since 2012 and he’s been a key player for many of those seasons. But that is no longer the case and with his attitude being brought into question.

Therefore, it would be best for the new man to show him the door and bring some money in which can be put towards brining in someone who wants to be at Goodison Park and will show the fight needed for a team scrapping at the bottom of the table.