With just 11 goals in 12 league games this campaign, it’s fair to say Rafa Benítez’s Newcastle United side aren’t finding it easy to hit the back now they're in the Premier League.

They only have two in their last four top-flight games, while Joselu and Dwight Gayle have just three goals between them.

The former Crystal Palace forward managed 23 league goals in just 26 starts last season, firing the Magpies back into the top flight at the first attempt. But he hasn’t found the switch to the Premier League quite as smooth.

With Aleksandar Mitrović out of favour and subject of Brighton transfer rumours, it has fallen to Joselu and Gayle to lead the line for the Magpies until January at least.

Despite their poor return so far, midfielder Jonjo Shelvey has backed the pair.

“The players are a lot more tactically aware in this league, and it’s a lot harder than the Championship,” the 25-year-old told the Shields Gazette.

“You probably get a lot more time on the ball, but the defenders are in better positions, so it’s a lot harder to create chances and score chances.

“At the end of the day, we’re doing alright. We probably just need to score a few more goals.”

Shelvey isn’t wrong, they are doing alright, sitting in 11th, but he is also correct in his assertion they need to be finding the net more often. And this weekend gives them the perfect opportunity to do that.

While Watford may be in the top half of the table, they’ve been leaky at the back, conceding 21 Premier League goals so far this season. Only Stoke City, Everton, Crystal Palace and West Ham United have let in more.

Which formation to line up with?

In the majority of their games so far this season, the Magpies have lined up in a 4-2-3-1 formation with Joselu starting up front in all but one game since joining from Stoke.

But in the last two games, defeats to Manchester United and Bournemouth, Newcastle have set up in a 4-4-2, with Gayle partnering the Spaniard up front.

If you look at Newcastle’s expected goals (xG) rating from those two games, it’s at 0.68 against the Cherries and 1.11 against United, compared to an average across the season of 1.1.

It suggests despite having two strikers on the pitch, they aren’t creating many more decent chances. Perhaps, therefore, it would be wise to switch back to 4-2-3-1, the formation they set up in for their four league wins so far this season. 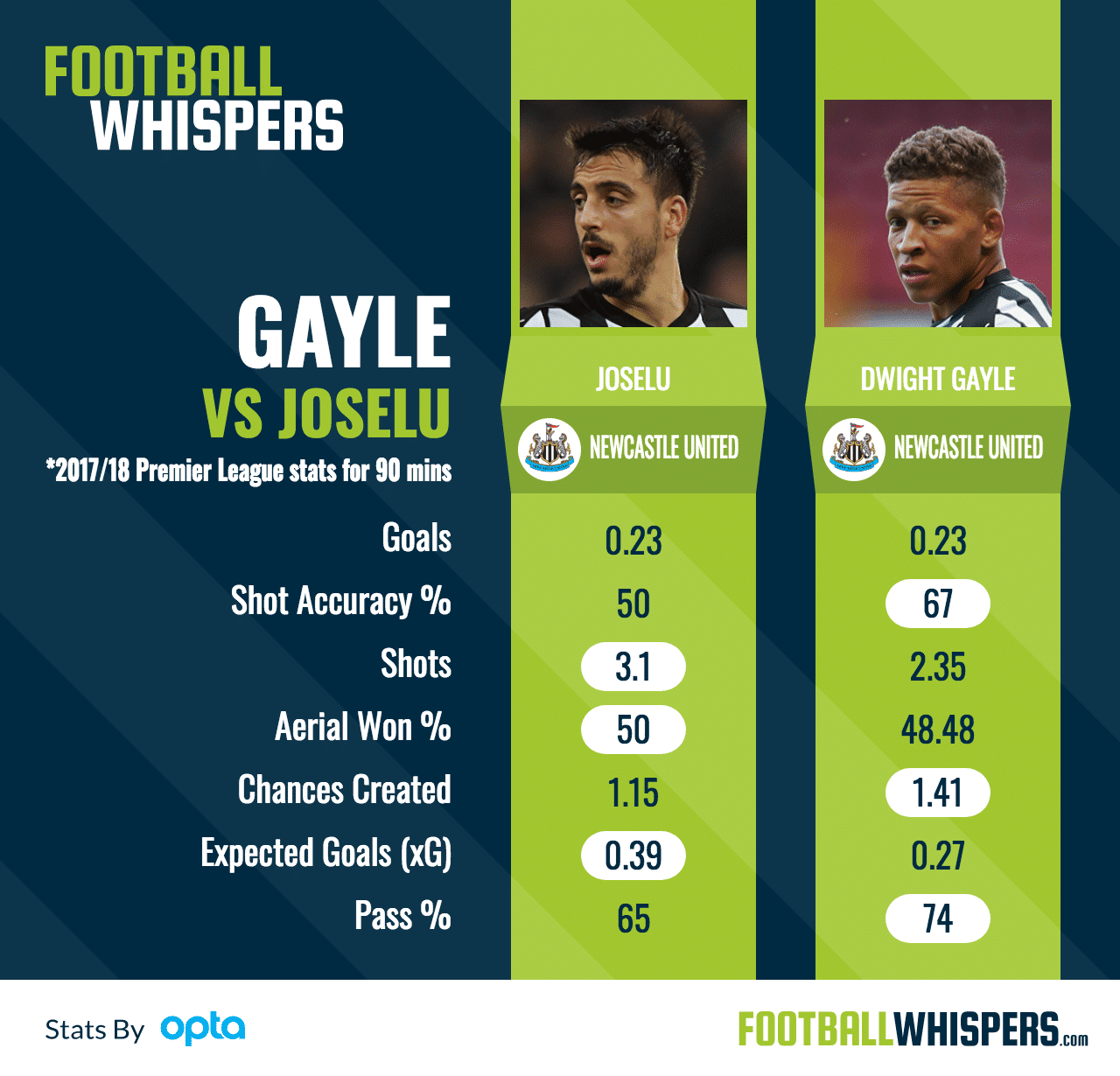 Time for Gayle ahead of Joselu

While Joselu has scored more than Gayle, it’s time for a change, especially if Benítez does decide to return to a 4-2-3-1.

The former Stoke man has started ten Premier League games, while Gayle has been named in the first-choice XI just four times, and with a return of only two goals from the Spaniard, surely it’s worth a change.

There’s not too much in between them if you look at it statistically. They both average 0.23 goals per 90 minutes, while Gayle has a much better shot accuracy of 67 per cent, compared to Joselu’s 50 per cent.

His xG per 90 minutes is also higher, at 0.39 to 0.27. But that does suggest that Gayle is more clinical in taking the chances he gets.

They both have averaged 0.23 goals per 90, meaning they’re both underperforming versus their xG. If the Magpies want a striker who can take their chances, perhaps that is the former Crystal Palace forward.

It’s certainly worth giving him a chance against a Watford team that isn’t great at defending counter-attacks, with his pace an added bonus.

His confidence will undoubtedly be high after scoring the first goal an opposition player has managed in the Premier League at Old Trafford so far this season.

While Joselu has clearly been Benítez’s favoured option since his arrival, it’s only right Gayle gets a chance to try and prove himself in the top flight before the transfer window opens in January – it does seem clear that the Newcastle boss wants a new face up front when the transfer window reopens at the turn of the year.

There’s not too much between Gayle and the Spaniard, and with only half the game time so far this season, the best reward for his strike against Manchester United would be a start at St James’ Park against the Hornets.