As we prepare for this season's FA Cup semi-finals at Wembley, it seems a good chance to reflect on the progress of a player that lit up the hallowed turf this time two years ago.

Aston Villa approached their final four showdown with Liverpool as huge outsiders. It was the game that would ensure Steven Gerrard's final showing in the famous red shirt would be a return to the capital in the final.

On the day, however, Tim Sherwood's men had other ideas, and while goals from star men Christian Benteke and Fabian Delph sealed a memorable win for the club it was the inclusion, let alone performance, of 19-year-old Jack Grealish that really caught the eye. The much maligned former Villa boss made the bold call to hand the teenager only his third competitive start in a huge game, but boy did the twinkle-toed playmaker repay his faith.

It was his composure and maturity in possession in advanced areas that instantly made Grealish stand out as a rare talent. He combined superbly with the two aforementioned goalscorers all game, registering the assist for Delph's winner and completing 92.3% of his passes on a day that Gerrard and Philippe Coutinho achieved just 82% and 81% accuracy by comparison.

While the debate as to just which nation this next big talent would turn out for had started before that game, such was his already burgeoning reputation from youth level football, his Wembley showing really brought it into the public domain. Grealish's name was a household one almost overnight by virtue of the press building up his decision to represent either the Republic of Ireland or England, before he eventually chose the latter.

It's fair to say he hasn't dealt with the pressures of the media spotlight well since, garnering a reputation as a party boy off the pitch and a pretty boy on it. Style over substance has been the assertion of many since Sherwood's departure, with his peaky blinder haircut and miniscule shinpads making him a target of both opposition fans and players.

In truth though, the reason that Jack Grealish is the most fouled player in the Championship (felled 4 times per 90 minutes), overlooking Neil Warnock's claims that he dives at any given opportunity, is because he remains an outstanding talent. His beautiful goal against Fulham last weekend was his fourth of the season — all four of which wouldn't look out of place in a goal of the month compilation — and a reminder that most people feel they have been all too infrequent.

Grealish himself would claim that playing time has been too. For a youngster of whom such big things have been expected at Villa long before he even broke into the first team, dazzling as the youth team were crowned NextGen champions in 2013, regular action is a must if he is to meet those expectations.

Rémi Garde perhaps understandably didn't trust him given his off field misdemeanours during the Frenchman's reign, and while Roberto Di Matteo seemed willing to hand Grealish a second chance, the youngster won't have been particularly encouraged by the way Steve Bruce has gone about fixing the ensuing mess.

Never really having had the opportunity to do so in the past, the former Birmingham boss has thrown money at the problem, and plenty of it. That's all well and good, and was certainly called for in a number of cases, but in the process he sent a message both to the player and the fans that Jack Grealish wasn't the saviour they hoped he would be. 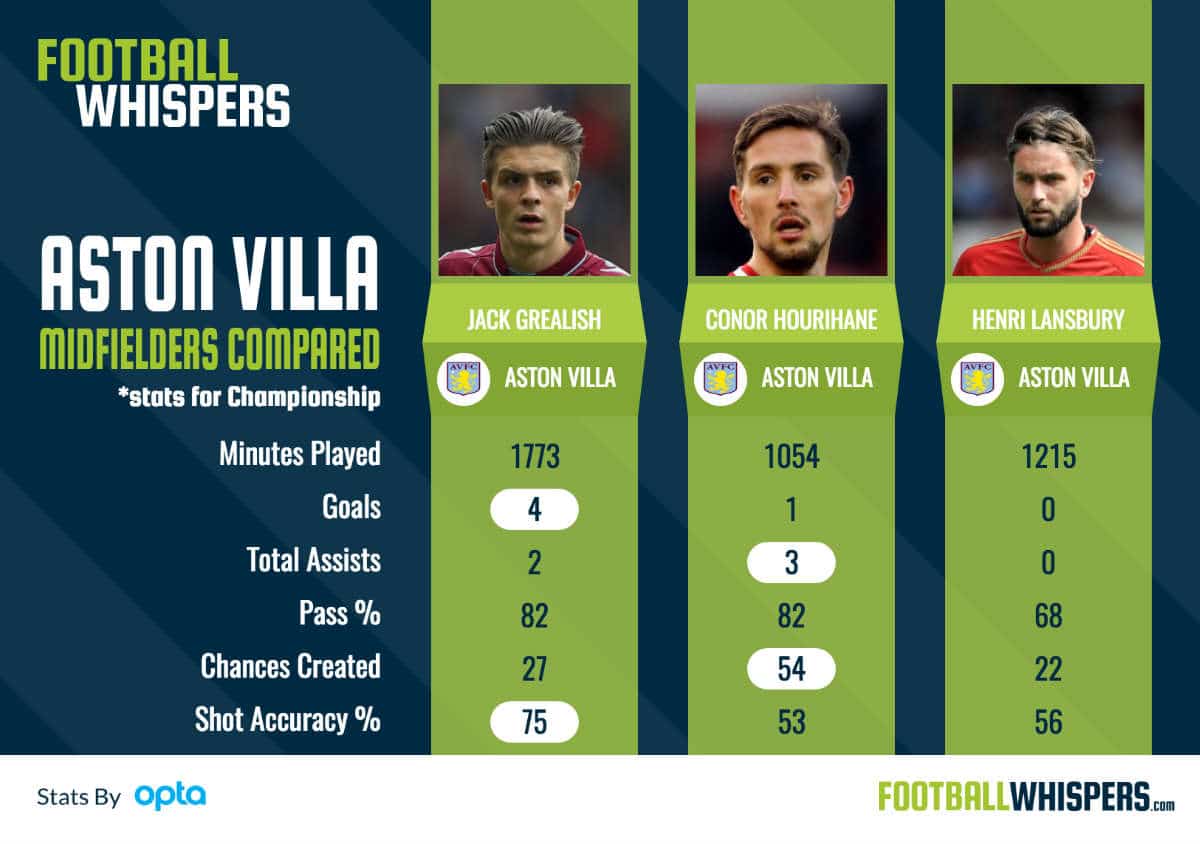 READ MORE: NO EXCUSES FOR ASTON VILLA NEXT SEASON – PROMOTION A MUST

Scott Hogan's signing pointed to a switch to a 4-4-2 or 5-3-2 formation that wouldn't play to his strengths, while the additions of Conor Hourihane, Henri Lansbury and Birkir Bjarnason only added further competition in midfield. While his natural position would probably be defined as a number 10, the youngster is arguably best deployed as an inside forward on the left, able to cut in onto his favourite right foot just as he did at Craven Cottage.

Some supporters will attest to the fact that Grealish had his chance and didn't take it, but that's not wholly fair or accurate. He's still just 21 after all, and has never started more than three consecutive games under Bruce. Monday was only the sixth time he's completed the 90 in the league under the current manager, and of those games he's arguably been Aston Villa's best performer against the likes of Cardiff, Wigan and Fulham.

What will now be interesting to see is whether Grealish keeps his place in the side for the big derby against the Blues or is sacrificed for what Bruce would no doubt see as a safer option. It's the sort of occasion that the playmaker needs to shine in, or at least be given the chance to, to help reignite a career that has flickered but still not caught alight.

WHAT HAS GONE WRONG AT ASTON VILLA?