Brighton and Hove Albion picked up their eighth point of the Premier League season on Sunday, it could have been three if not for Wayne Rooney’s late strike that helped Everton steal something from the Amex.

Breaking down the numbers behind their campaign so far will have Chris Hughton worrying about his attack. Although the game exploded in the latter stages, going into the break the home side hadn’t managed a shot on target against the Toffees.

In eight games, they have scored just six times. Only West Bromwich Albion and Swansea City take fewer shots per game and it is only the Swans who manage to get fewer of those shots on target.

The newly promoted side are averaging 9.5 shots and just 2.6 on target. It doesn’t take a genius to work out that if you test the goalkeeper more, you make your own luck and there is a bigger chance you will find the back of the net.

Regardless of the results, Brighton’s expected goals (xG) numbers have been poor this term. Even in the 3-1 win over the Baggies, the home side rode their luck, scoring twice but finishing with an xG of 0.40.

Pascal Groß miscontrolled the ball at the back post for the opener that day, slipping and somehow making contact to sweep the ball into the near corner.

The German’s second was a low right-foot shot from distance and Tomer Hemed finished it off with a special header, beating Ben Foster at his near post.

xG measures the quality of the chances created and Brighton’s numbers, 0.40 for the West Brom win, 0.51 as they beat Newcastle United 1-0 and a season high 1.06 on Sunday suggests that Hughton’s side are not making the right decisions, or creating good opportunities to find the net.

To win games, you don’t need clear-cut chances, but to be consistent over a season and climb away from a relegation battle, it will certainly help.

Ahead of Friday night’s battle with West Ham United, the south-coast side need to try something different and this is the perfect time for Hughton to unleash José Izquierdo, his summer signing from Club Brugge. 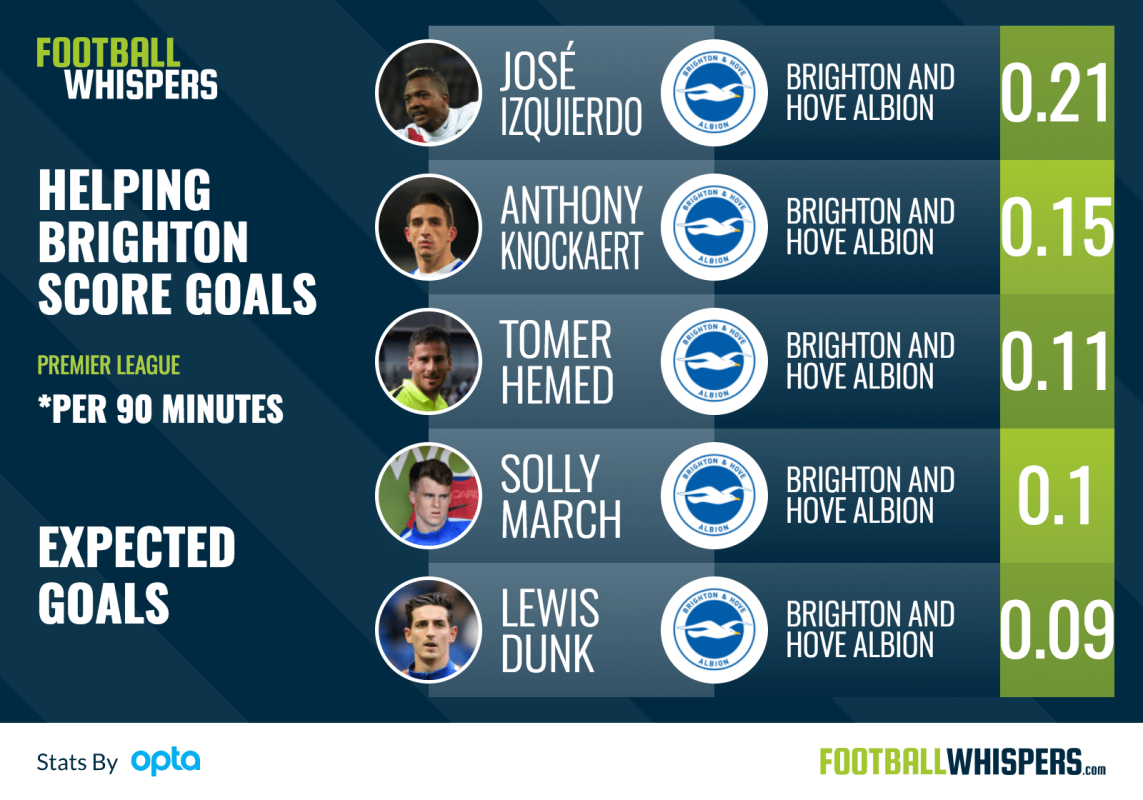 It cost the Premier League club £13.5million to lure the Colombian from the Belgium and he arrived with a huge reputation.

On Sunday, it took Izquierdo less than 60 seconds to show his intentions off the bench. Playing the last 17 minutes, he cut inside and unleashed a long-distance effort with his first meaningful touch.

He looked hungry, energetic and used his pace and drive to make runs in behind the defence, or to face up opponents and take then on down the left.

At 1-0 he combined well with Izzy Brown to create space for the 20-year-old to force Jordan Pickford into a good save. That could have sealed the win.

Per 90 minutes, for Anthony Knockaert is next with 2.1.

He is attempting more dribbles than anyone else in the Seagulls squad and completes 41 per cent. Knockaert again, just ahead on 50 per cent of his 3.8 attempts.

Groß, as discussed in this article last week, is Brighton’s most creative force with 2.4 key passes per 90, but Izquierdo is next on 1.6

His numbers could be slight exaggerated due to the face he has only played 116 minutes this term, but his return for Club Brugge more than suggests this is not a fluke.

The Colombian is a force of nature, a winger who capable of making things happen.

There is really no point in having players who can only create crossing opportunities in this wing, due to the lack of a quality striker. Hughton needs someone who can fashion chances from nothing and score them as well as being a provider. That’s perfect for the 25-year-old.

With 76 long balls per game this season, only Burnley and West Ham attempt more, so you need players with pace who have the intelligence and movement to make it count.

Against Zulte Waregem last season, Izquierdo showed he is ideal for that inside forward role. 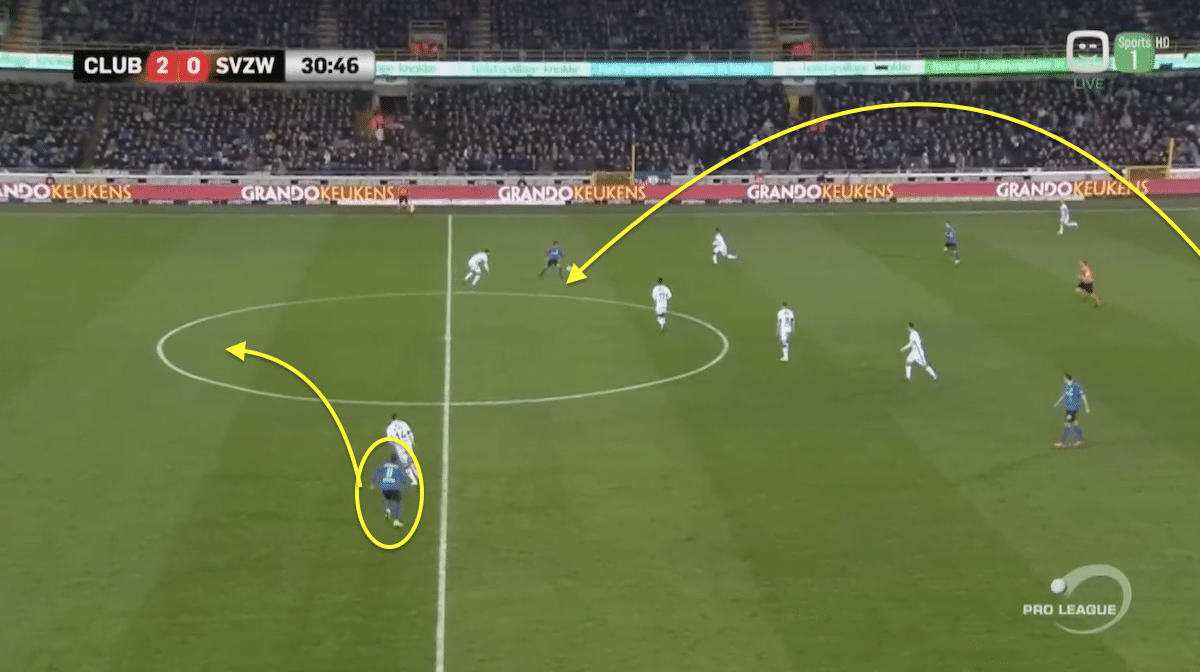 When the ball gets lobbed forward, the winger is already making his run across the defence, looking for the quick release. 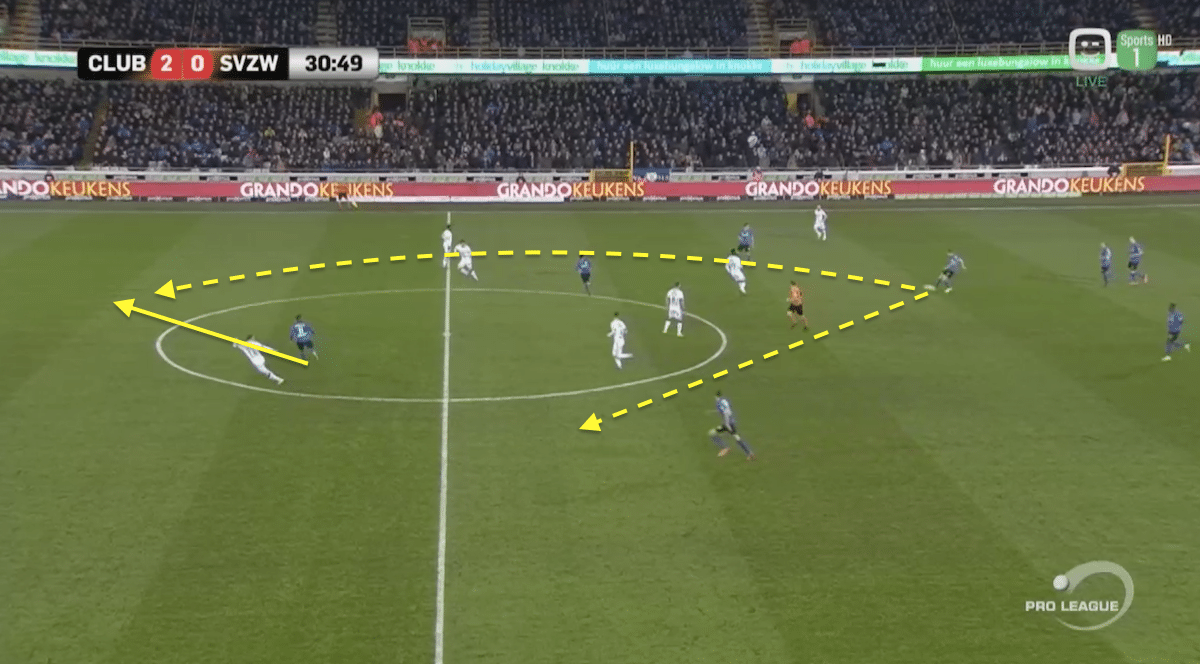 It doesn’t come and it’s played back into the midfield. Again, the Colombian is ready and is running across his marker. However, the ball is played out wide to the runner down the left. 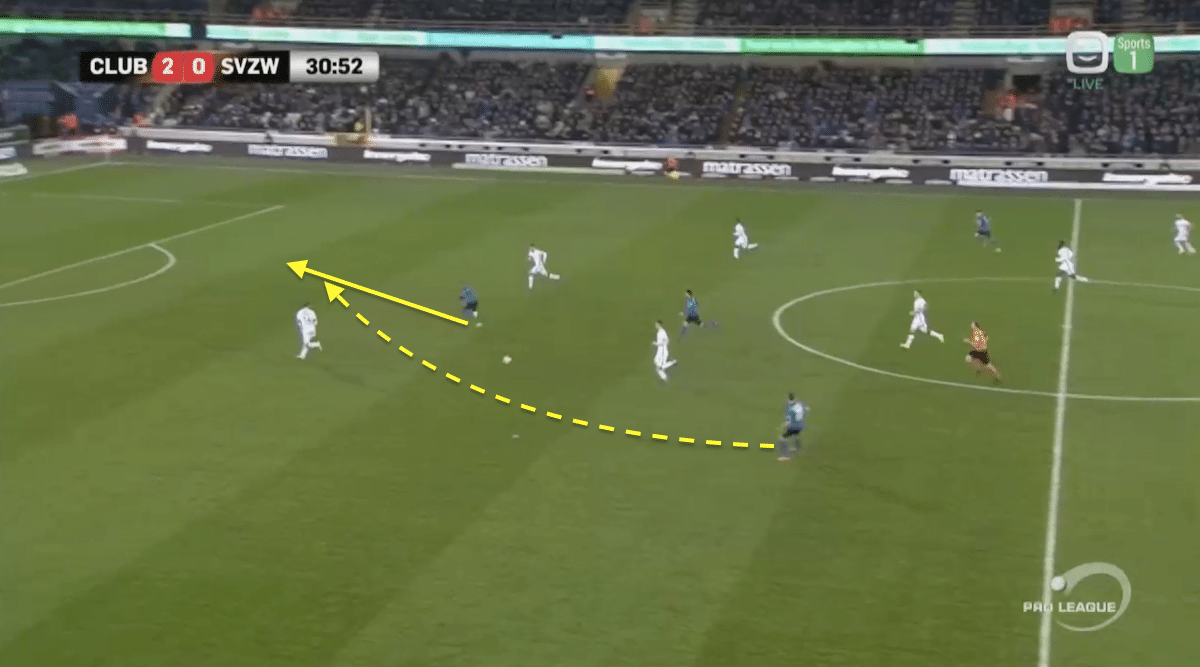 Third time is the charm for the Brugge forward. The defence still can’t react to his pace and this time the pass finds the target and Izquierdo has the speed and the power to get in behind, then to hold off his marker before adding the finish.

Leicester City fans may also remember his scintillating solo run that saw him smash a stunning near post effort high past Rob Zieler in the Champions League last season.

He’s unpredictable, he’s exciting, and he’s exactly what they Brighton attack need at this stage of the season.

According to understat.com, Izquierdo leads the Seagulls in terms of xG per 90 minutes, with of 0.21 per 90 minutes and is third in expected assists (xA) with 0.13.

You can understand the coach giving his new player a few weeks and a few opportunities off the bench to get up to speed with what to expect in the Premier League. Yet, there is a school of thought that you are only going to know if he is up to the task by throwing him into the start and giving the Colombia international bigger chunks of minutes to make his own case.

If Brighton were scoring goals for fun and comfortable in mid-table, you would understand a reluctance to play it safe, but they are not.

Still early in the season, a few good results on the back of an Izquierdo moment of magic could just be exactly what Hughton needs in his attack.