No footballer’s career lasts forever. All eventually have to stop; their bodies no longer able to replicate the picture in their mind. And Cristiano Ronaldo, who turned 33 this week, has started to find that out.

Yet this term there have been signs that Ronaldo is no longer the relentless force of old. And as he approaches his mid-thirties, there are big question marks over his future with Los Blancos.

As the poster boy for Madrid’s recent success, the spotlight also focuses on CR7 when his side isn’t doing as well, which has been the case this season.

Ronaldo has taken his fair share of criticism for Madrid's failings and has uncharacteristically only scored only eight league goals. But as he ages the powerful acceleration and blistering pace that helped set him apart from the pack has started to disappear.

Indeed, if you watch Ronaldo, it is evident he has lost a yard of pace and is having to adapt his game. He is still a very good player, but he is on the decline.

That slowdown happens to every player, time waits for no-one after all, and at 33 years old it looks like the Portuguese superstar is beginning his descent from the very top of the game.

Ronaldo won’t want to admit it publicly of course, and that’s probably why, despite being ranked the world’s highest-paid athlete by Forbes in 2016 and 2017, he’s reportedly asked for a pay rise at Real Madrid.

Yet Los Blancos are reportedly refusing to offer him a new deal, with widespread reports from Madrid in the last few months claiming he is set to leave in the summer due to his unhappiness.

Ronaldo did only sign a new contract just over a year ago, which runs to 2021, when he will be 36. But can Madrid afford to let one of the world’s greatest ever players, and their all-time top scorer, leave?

With Madrid sitting fourth in the league and unable to retain the title, the club will undoubtedly undergo a massive overhaul in the summer. Perhaps the biggest symbol of a fresh era would be letting Ronaldo go.

Would that be the right decision? If you look at how Ronaldo has performed over the last four La Liga seasons, it is clear there has been a drop-off in effectiveness and performances.

He was probably at his peak when he scored a ridiculous 48 goals in 35 league games in 2014/15. Since then, however, there has been a marginal but gradual decline. 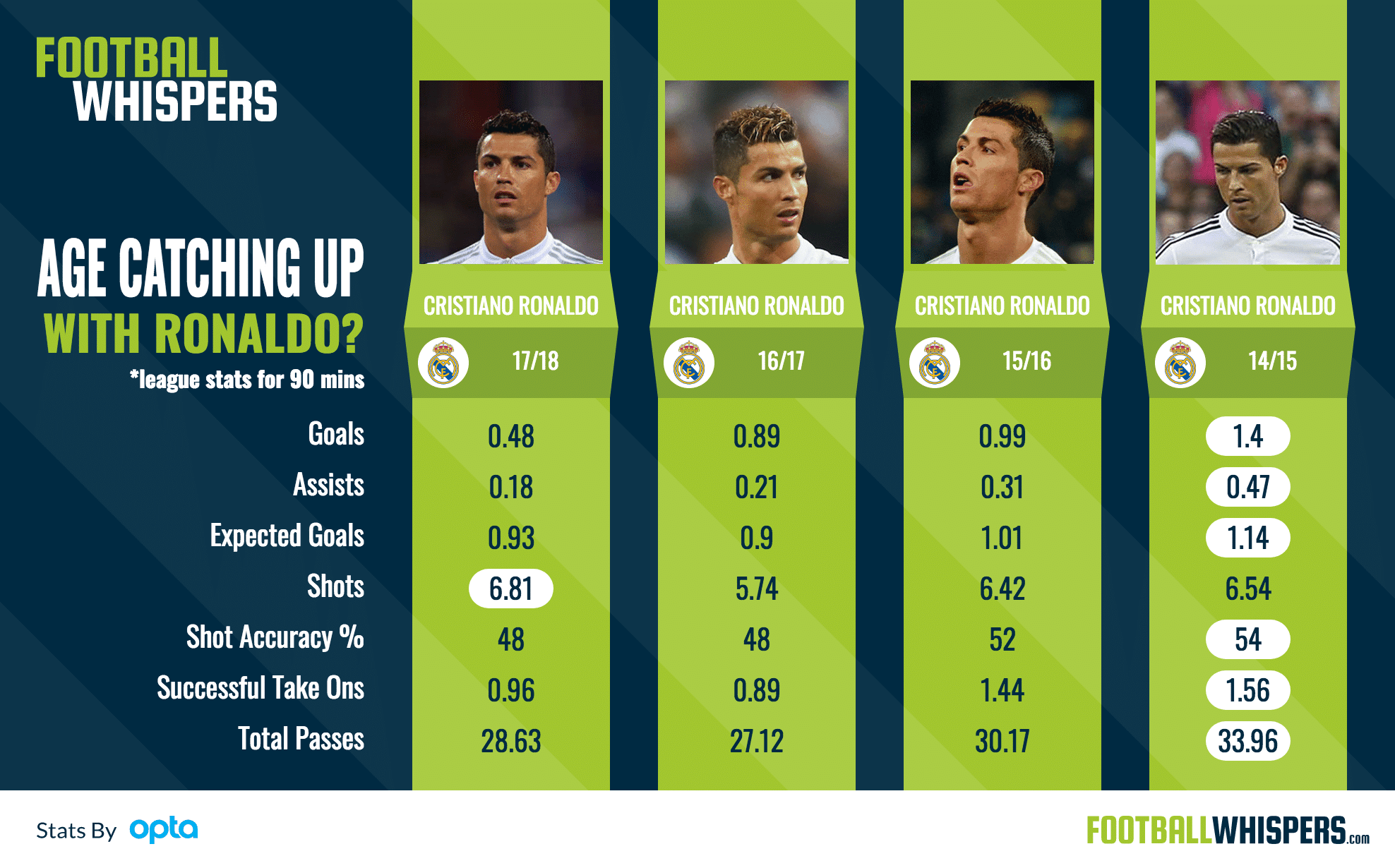 Unsurprisingly his goals per 90 minutes this season is considerably lower. It’s been decreasing since his peak in 2014/15, when it was 1.4. Now it’s nearly a third of that, 0.48.

Of course, last season’s record of 0.89 is hugely impressive and his current output of almost one goal in every two matches would be the envy of many players, but for Ronaldo it shows a decline from his status as the very top of the game.

Tellingly Ronaldo is taking more shots per 90 minutes this season than at any point over the past four campaigns – 6.81. But the 33-year-old’s shot accuracy of 48 per cent – compared to 54 per cent in 2014/15 – is a factor for for poor goal return. He is no longer clinical as in his heyday.

His expected goals (xG) per 90 value is also considerably down too – now at 0.93. That he is scoring just 0.48 goals per 90 says proves the Real No.7 is underperforming this season.

The statistics for this season and clear drop off from previous years isn’t good enough for someone who wants to be an out-and-out striker at one of the world's biggest clubs – he is missing high-quality chances at an alarming rate.

Just last month, with all the talk over his future, Ronaldo pledged his future to Real Madrid.

“I love this club and I want to stay here,” he said. I love living here, I like the weather, people and I'm close to Portugal. Madrid is my city since 2009.”

Perhaps it’s becoming clearer that Ronaldo knows he’s in decline and is trying to convince the club to sign him to one last mega-money deal. But as difficult as it may be, the best thing for Madrid would be to let him go at the end of the season.

Despite his clear commercial value and legendary status, Ronaldo is on the decline. A side that’s struggling can’t afford to carry any passengers on the pitch, which sadly that is what Ronaldo is becoming.