When Tiemoué Bakayoko moved from Stade Rennais to AS Monaco, not much was thought of the £7million switch. It wasn’t in the same league as Radamel Falcao or James Rodríguez, but it was touted as a move for the future.

Two years on, and after nearly 70 appearances for the Monegasque side, the 22-year-old Parisian is a transfer target for Manchester United, but the Daily Mail claims that the towering midfielder is set for a £35million move to Chelsea.

Last season was Bakayoko's breakthrough campaign. His performances helped the Monegasque club top the table in France, plus knocking out Tottenham Hotspur and Manchester City in the UEFA Champions League.

After the defensive midfielder had shown promise at Rennes, backed up by the disappointment of the Breton fans when he left. Now Monaco fans fear the same, as Europe's finest descend on the Stade Louis II to watch the talented youngster.

“He’s 22 years old. He’s obviously one of the many players that’s been linked with Manchester United.”

“I think if they can shift some players out, they be very happy to bring him in. He could potentially be an alternative to Michael Carrick.”

Bakayoko would start the opening game of the 2014/15 campaign, but was then dropped until Week 9. Dropped into the starting line-up against Paris Saint-Germain. He impressed, but was clearly raw. That was backed up by the yellow cards and subsequent red against Evian, Bastia and Saint-Etienne.

After the suspension, he showed maturity and was coming into some excellent form before a hamstring injury against Nantes ruled him out until the last few weeks of the campaign. Monaco had seen enough to know he was worth the effort to develop and the time and patience needed to help him grow.

Now, with Leonardo Jardim having transformed Monaco from a defensive, cautious team, to one of Europe’s most free-flowing attacking units, Bakayoko is one of the key elements of this.

ASM changed to 4-4-2 last season, in a similar move to that which helped Leicester City win the Premier League. Bakayoko, with the very mobile and versatile Fabinho beside him, have become the best midfield duo in France.

The return of Falcao and the attacking play of Bernardo Silva and Thomas Lemar received a lot of praise, but they would be nowhere without the base protection that Bakayoko provides.

He is not only the destroyer, but the man who wins the ball back, turns, gets his head up and starts the counter. The former France Under-21 international doesn’t just win possession and pass the ball on to the nearest man. He looks, he penetrates, sometimes he even gallops forward in attack.

No matter what your views are on the quality of Ligue 1, there are enough players who have come across and been successful in the Premier League, that you should respect their ability. When they also show what they can do against English opposition in the Champions League, that’s when more people take notice.

What does Bakayoko Bring?

From the graphic below, you can see Bakayoko’s well-rounded game. He anticipates, reacts, recovers and starts a counter for Monaco. Spurs couldn’t handle him.

As soon as the ball is about to be played, he already knows what’s coming and makes his move.

Even when Son Heung-Min picks up the ball in the centre, Bakayoko still has ground to cover, but with his long legs, pace and determination, he makes it up, puts in the perfect tackle and turns to start the counter.

Although listed at just over six feet tall. Bakayoko is a man-mountain. He’s got the upper body strength to hold off stockier opponents. If you were going to manufacture a midfield destroyer, he is the template that modern football should be following.

Tall, good in the air with an impressive leap for his size. He’ll charge in and use his reach to get some sort of touch on the ball. Naturally, he still gets called for fouls, but he only picked up two yellow cards in 32 appearances.

Far from a lumbering lump, he’s also dynamic and has the power to push the ball forward and the vision and quality of pass to spread the play and get the very talented forwards on their way. Perfect for a team like Chelsea or Manchester United.

Would Bakayoko suit the Premier League?

When you play for AS Monaco, you need to have a range of passes in your arsenal and it’s a feature of Bakayoko’s game that can go unnoticed. You could easily see him as the sitter, destroyer, but he is also an instigator. 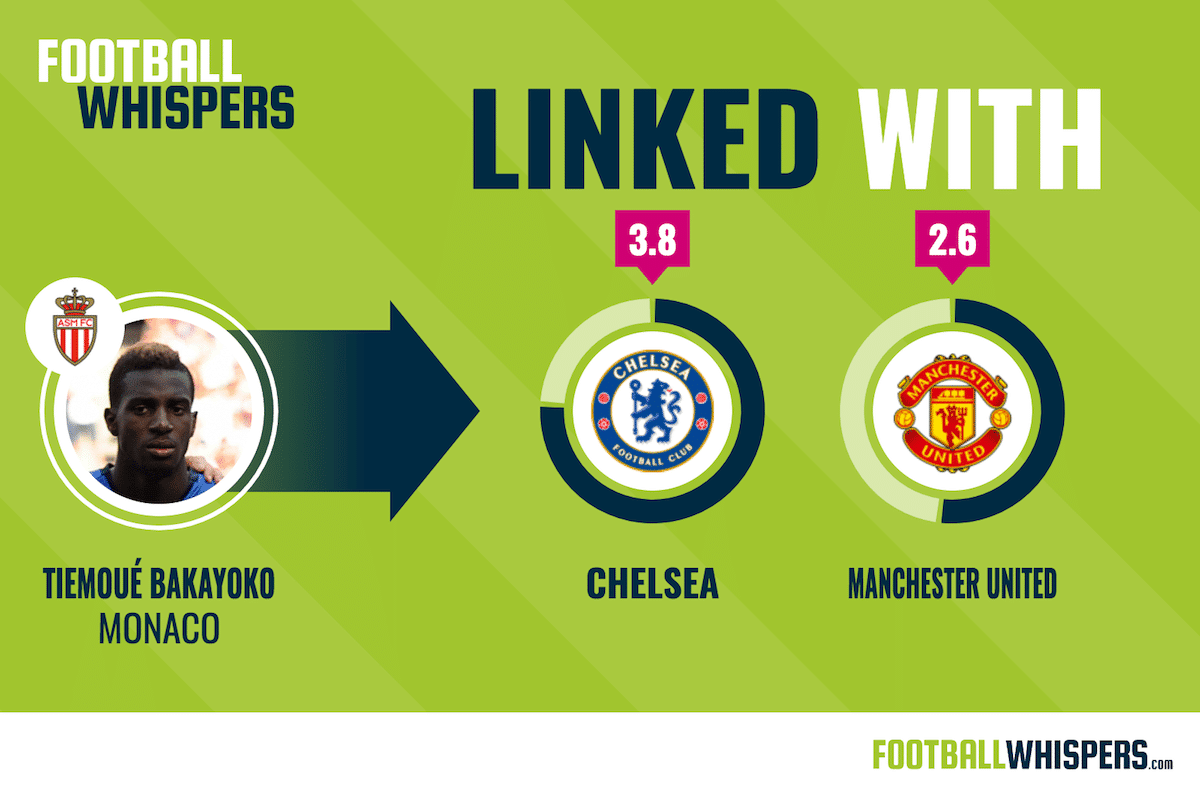 Michael Carrick, although having an excellent season, is 35 years old. He can’t go on forever. Bakayoko would be the perfect foil for Paul Pogba. With the Monaco man patrolling the middle of the perfect, Mourinho could play the former Juventus man to the left and Ander Herrera to the right and create one of the most devastating midfields in England.

“I have had six good first months, but the season is not over. I will not leave Monaco this winter, that is a certainty,” Bakayoko told Eurosport after the rumours emerged in January. “I do not want to leave. ASM is a beautiful institution. Certainly, the Premier League is a dream, but I have no reason to leave this winter.”

The deal that the midfielder signed in 2014 runs until 2019 and sees him pick up around £13,500 a week. Mere peanuts compared to any of the players he would be up against. N’Golo Kanté is on around nine times that of his countryman. Even Asmir Begović earns quadruple that of the Monaco starlet.

Seemingly, Bakayoko's performances in Europe have convinced Chelsea to make a move and a potential midfield partnership with Kanté is a mouth-watering prospect.

They both cover so much ground in a four-man midfield, it would be like the Blues are playing with four or five men in the centre of the park. Both can also play further forward, but the Monaco man would give Kanté more freedom to show his attacking instincts – just like he did against United in the FA Cup.

Bakayoko has ambition and a move to England is definitely on the horizon, but it seems he is not quite finished in France: “Today I have two goals: to finish champion of France and to go as far as possible in the Champions League.”

Part one of that plan has already been achieved, with Monaco winning their first Ligue 1 title in 17 years. There's no reason why the second part can't be achieved in England.