This is a preview which focuses on the Chinese Super League matchup between Tianjin Tigers and Shanghai Shenhua at the Kunshan Sports Center Stadium.

Tianjin Tigers were happy to come away with a goalless draw against Beijing Guoan in the first league match since the Chinese Super League restarted. Shanghai Shenhua broke a three-game winless run with a 3-2 victory over Dalian Pro thanks to a late goal from Zhao Mingjian.

Tianjin Tigers have managed to win since the last three away games against Shanghai Shenhua. Surprisingly, though, their home record against this opponent is not so great with two losses in the last three. Kang-hee Choi’s team were relieved to get the three points against Dalian Pro and this reinforces their confidence levels ahead of this match. Meanwhile, the Tigers were lucky enough to come away with a draw against Beijing Guoan.

The Tigers had to face a lot of shots in the game against Beijing Guoan and the situation is expected to be worse against an offensively solid team like Shanghai Shenhua, who have scored 10 goals in the opening six league matches. Even though Kang-hee Choi’s team have not set the world alight on fire in away games, the Tigers do let the opposition take a lot of shots.

The Tigers were restricted to shots from outside the box in the recent goalless draw against Beijing Guoan. The result means that the Tigers have not scored any away goals so far this season. Even at home, things are not rosy with the team only managing three goals in as many games.

Tianjin Tigers are facing a major fight to get out from the bottom half of group B. The team are already a whopping five points adrift of the top five and the recent performances have not hinted at any major rise in the league positions. The offensive threat offered by Tianjin Tigers has been the worst league – especially in away matches.

Shanghai Shenhua are just one point away from Shanghai Port following the late winner over Dalian Pro. The victory could not have come at a crucial time for the team, whose last league victory before this win was against Wuhan in April. 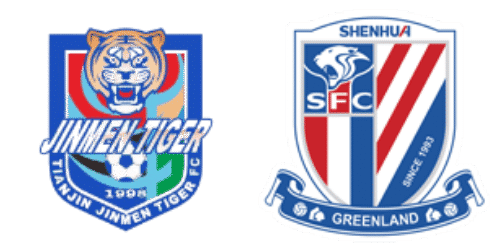