Tianjin JMT welcome Shenzhen to the Tianjin Olympic Center Stadium for a Chinese Super League clash on Thursday, June 9th. Can Tianjin upset the odds against Shenzhen again? Read our free predictions and find the latest odds for the fixture below in our detailed match preview.

Tianjin JMT are unbeaten in four previous meetings with Shenzhen ahead of the teams’ Super League clash on Thursday. Read our top three predictions for this week’s fixture below.

The bookmakers’ have priced Tianjin JMT as major underdogs ahead of Thursday’s game, though their outstanding record against Shenzhen should allow them to approach this week’s assignment confident that they can produce an upset. Tianjin are unbeaten in their last four meetings with Shenzhen since 2019 and we have to go all the way back to 2004 to find the last victory for the Youth Army in this fixture. With history on their side, we recommend a stake on the hosts in the generously-priced double chance market here.

Ghanaian striker Frank Acheampong might end up on the losing side this week, though the in-form attacker has the tools to make a strong individual impact. Acheampong joined Shenzhen from Tianjin JMT last year and he opened his account for the current campaign with two goals against Rongcheng on Saturday. With his sights zeroed, we’re backing Acheampong to add to his early tally with another strike at a familiar Tianjin Olympic Center Stadium.

Top Betting Odds and Stats for Tianjin JMT vs Shenzhen

Check out our rundown of the best stats for Thursday’s game below alongside a tool to help you choose the best odds.

You can read all of the latest team news and injury updates for Thursday’s Chinese Super League tussle between Tianjin JMT and Shenzhen below.

Tianjin JMT were held to a 1-1 draw at newly-promoted Meizhou Hakka in their campaign opener at the weekend and a couple of changes to their XI this week are likely as a result. Zihao Yang and Zhou Tong were both taken off at half time last week and both players could be replaced against Shenzhen.

Shenzhen were comfortable 2-0 winners against Rongcheng in their first match of the new season and manager Lee Jang-Soo will want to avoid making too many changes to a line up that performed so well. Attacking midfielder Romain Alessandrini will hope to feature from the start having made a good impact from the bench last time out, however. 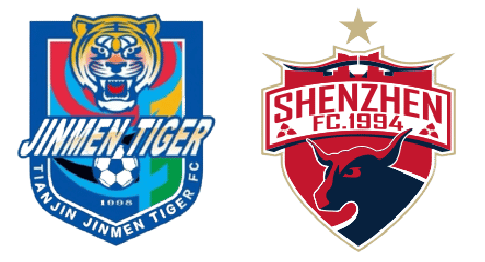 Shenzhen have been priced as favourites to beat Tianjin JMT by the bookmaker.

Tianjin JMT and Shenzhen drew 1-1 when they last met in October two years ago.